I know this forum is for hiking trip reports, but I thought that since the wedding was definitely in hiker paradise that some of you might enjoy checking them out!

The wedding was on June 24, 2011. I got this idea because I am a Backpacker Magazine subscriber and I saw an unbelievable spread of Yosemite. I have to admit, before I read the article I knew that Yosemite was in California, that it was really pretty, and that Half Dome and EL Capitan were there, but that is about it. I had NO idea that it was so beautiful. So, my husband and I decided that we would go to Yosemite on our honeymoon. I started doing research on Yosemite and saw a link to weddings in Yosemite, so I checked it out to see pictures. The first picture that came up was a wedding at Glacier Point. We immediately decided to get married there. Fourteen months later, we (along with 18 of our closest friends and family members) headed West for Yosemite. 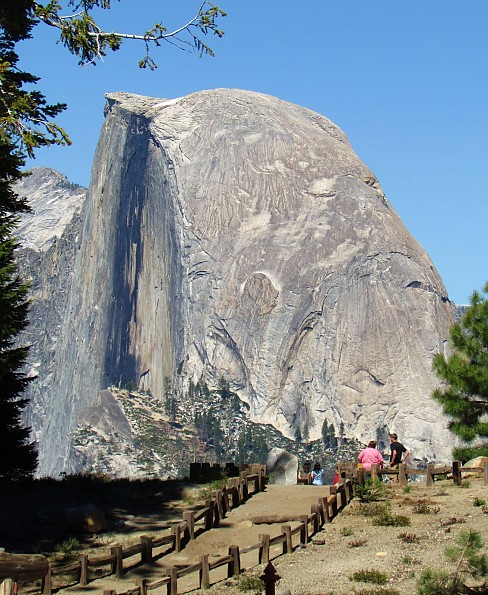 This is the first view of Half Dome you get when you are in the parking lot for Glacier Point. It is MASSIVE!

Groomsmen and Jay before the wedding. All photos with JR are credited to my amazing photographer, Jovan Rodriguez, from Lexington, SC. He and his girlfriend, Ashley, one of my bridesmaids DROVE from Columbia, SC to Yosemite! He did an amazing job! 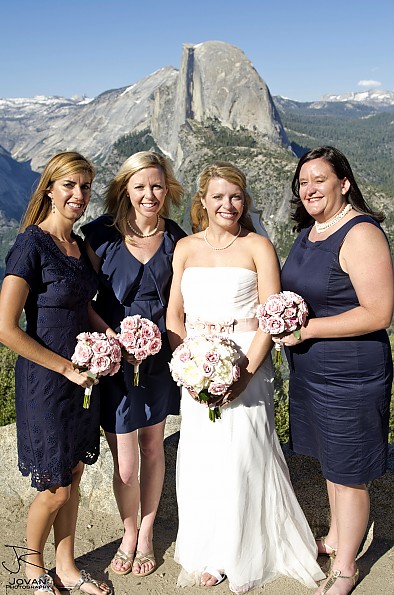 My bridesmaids and me :) 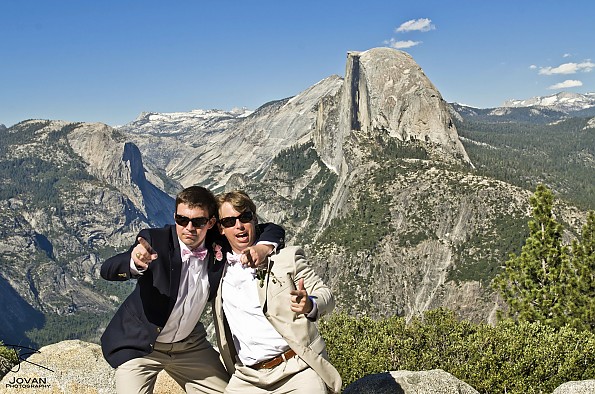 Jay and one of our best friends, Blake. He stayed for a few days and went hiking with us! 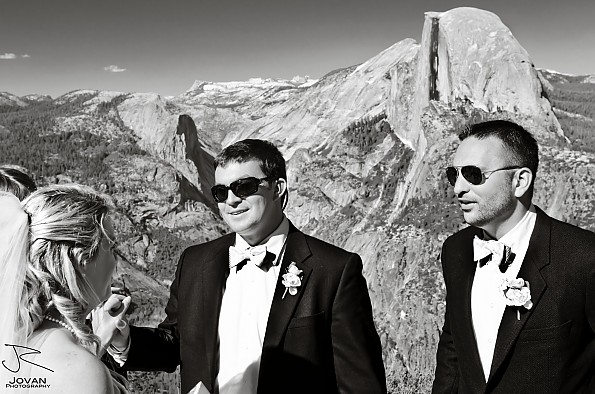 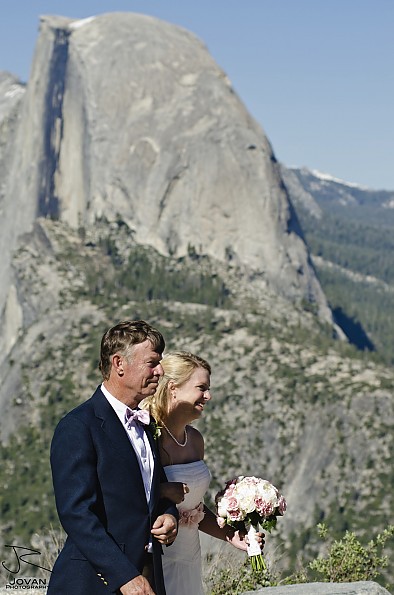 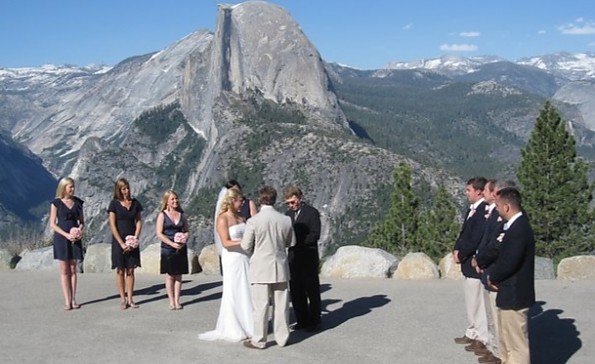 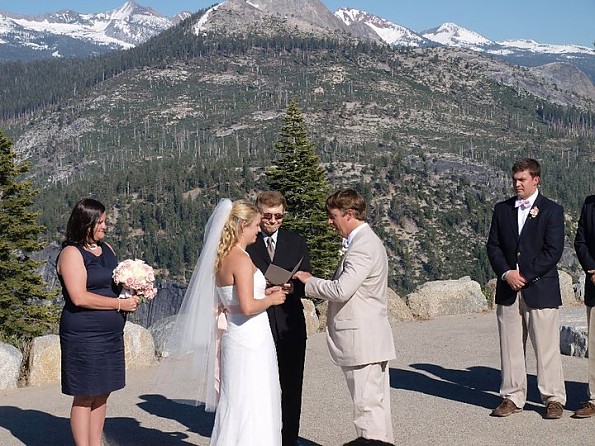 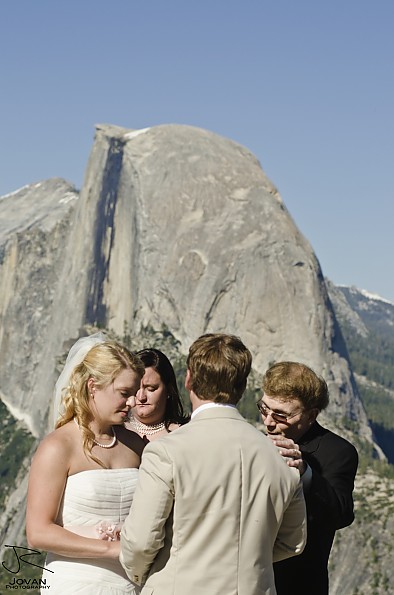 As Half Dome was our witness, we got hitched! :) 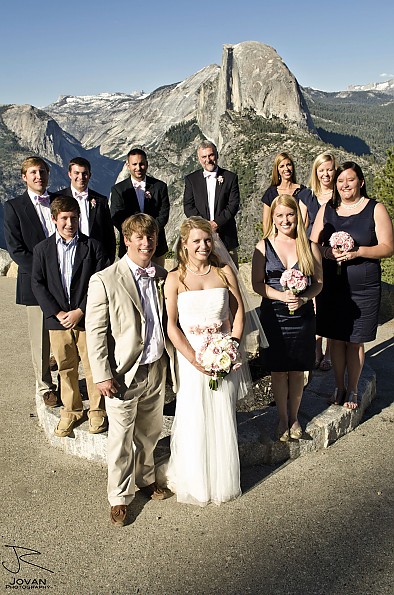 The wedding party after the ceremony 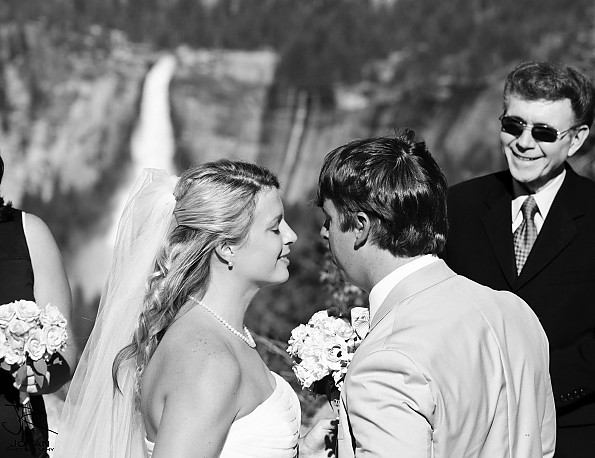 My veil looks like a part of Nevada Fall! 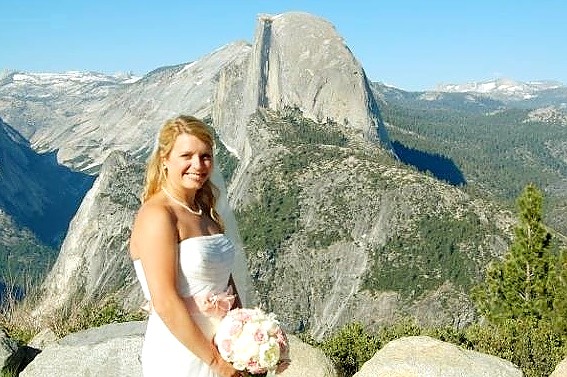 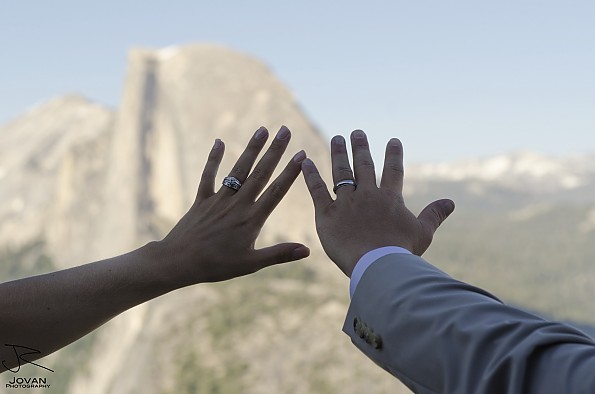 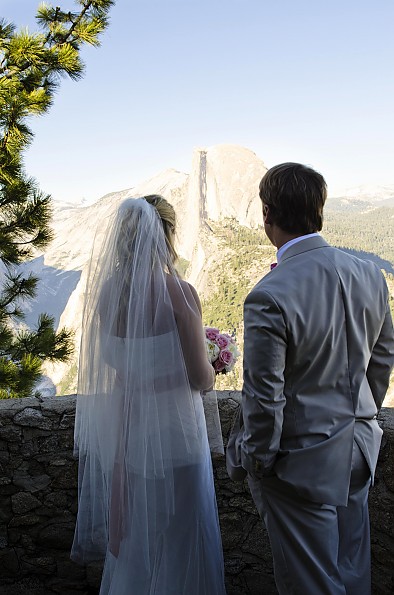 Here are some views from Glacier Point: 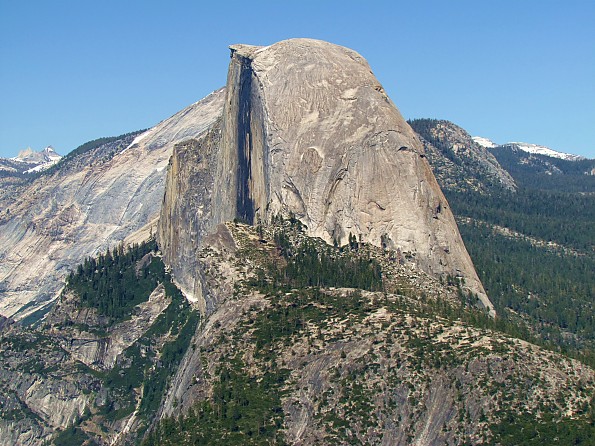 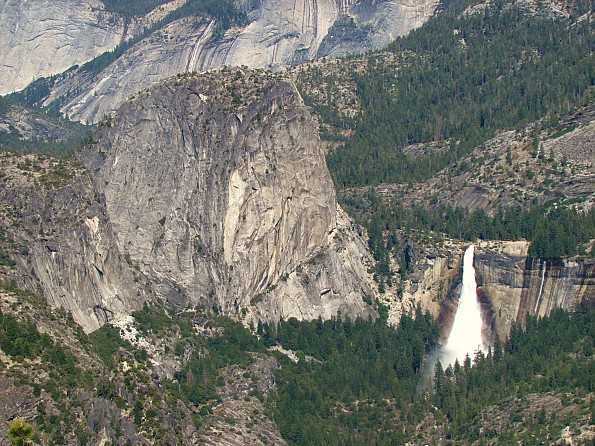 Liberty Cap and Nevada Fall from Glacier Point (we hiked to the top of Nevada Fall two days later on The Mist Trail. See Trip Report). 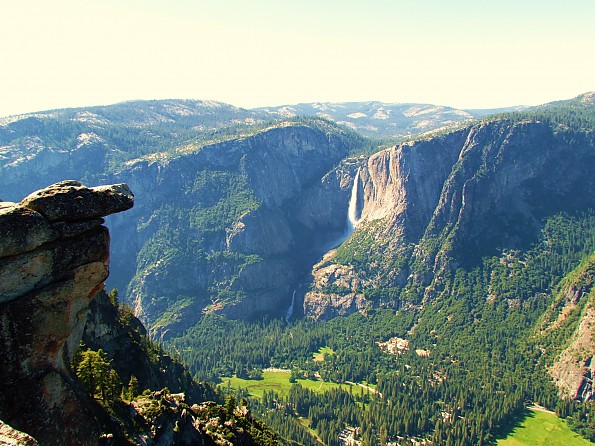 Glacier Point (to the left) and Yosemite Falls

The reception was at The Wawona Hotel in the Sun Room. It was beautiful! 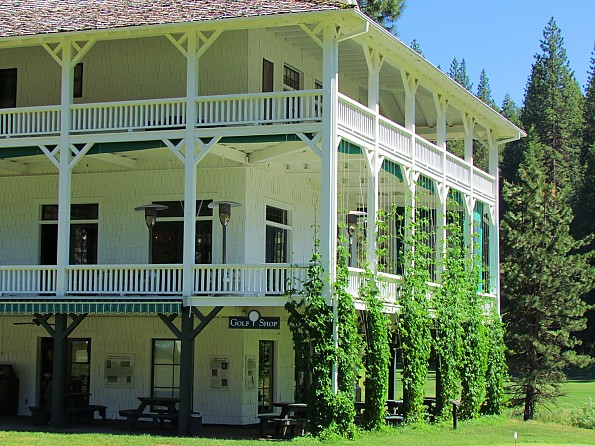 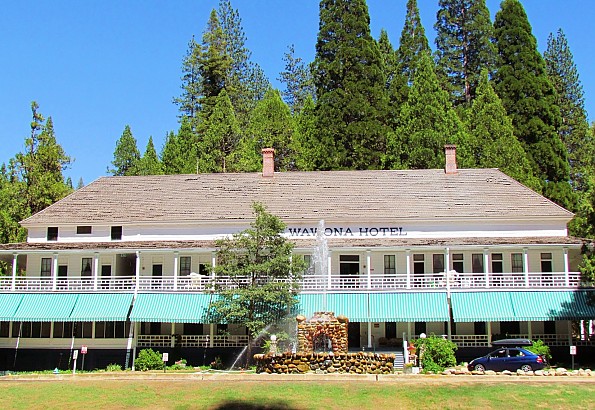 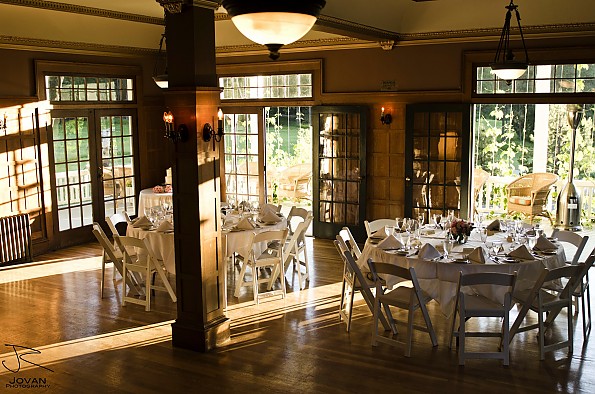 The whole group stayed together at the cabins run by Yosemite Four Seasons. They are awesome! They have hot tubs, pool tables, lots of beds and are very moderately priced (if you have a group) 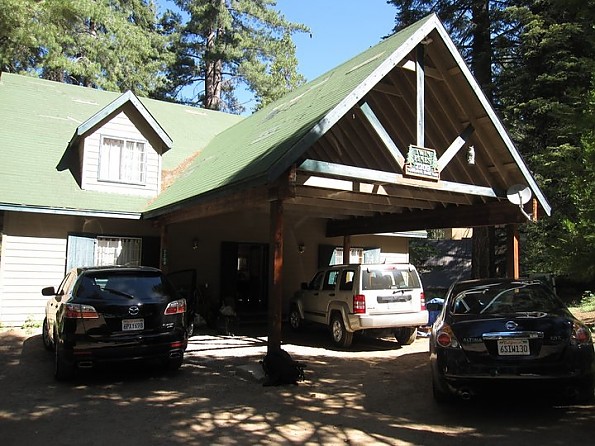 We stayed in "Twin Pines" 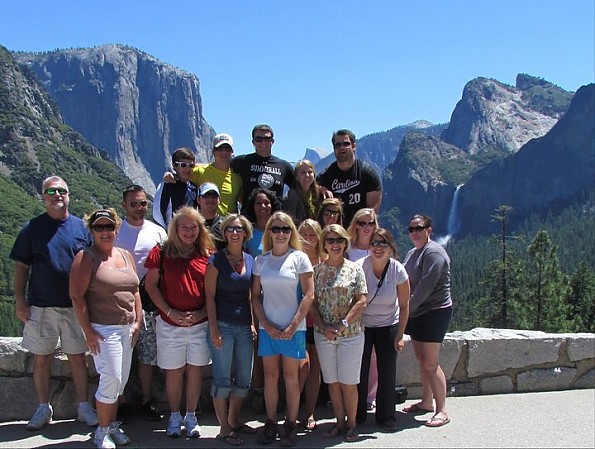 I wouldn't trade one day that we were in Yosemite for any other day in my life so far!

Very beautiful pictures and wedding! Thanks for sharing.

Two of our best friends got married on top of Cannon Mountain in New Hampshire a few years ago, which was pretty neat.

Sometimes I joke to my husband that if we ever got married again (to each other!), we could do a very cool outdoor wedding.

Alicia, I bet your friends' wedding on Cannon Mountain was awesome! I am so glad to have done our wedding outside in such a beautiful place! It just felt right! Of course the pastor read several John Muir quotes, as well...only fitting for Yosemite!

What a great place to get married! I have camped in the winter on Glacier Point in the early 80s. Such a great set of views from there to get hitched. Will bring back many memories someday and you can bring your future kids there and say this is where we got married.

My wife and I just pulled up Van Morrison Into the Mystic on YouTube and read your report whilst enjoying a glass of wine. Excellent photos! Well done and thanks for sharing!

Sounds like a great night, Patman! Great song, huh?!? Glad you and your wife enjoyed the pictures!

Gary, you are right! Great place to get hitched! :) I bet it was amazing camping there in the winter!

Might have to renew the voys there.  What a gorgeous place to get married.

Sweet! If I had known weddings could be like that, I might have gotten married a lot sooner.

We got married in the piney woods behind my father's B&B in Easton NH. When we toled our plans to my future mother-in-law she said "you can't get married in THE WILDERNESS!". Reception at the nearby town hall. A bunch of my wife's AMC buddies pitched in and bought us and Old Town Penobscot 16.5. Her ex-boyfirend was the ringleader, and after we experienced some marital stress trying to run whitewater together, we joked it was all part of an evil plan to win her back. Well, after many happy canoe trips, many with kids, in VT and the ADKs, we passed the canoe on to friends when we moved to Norway -- but just yesterday bought a new folding canoe, a few weeks ahead of our 26th. Now we'll be looking for good water in Norway.

Here's wishing you a similarly long and adventurous union!

How VERY nice! A great trip report and such wonderful pix! Thank you so much for letting us come to your wedding too!

I always wanted to get married on top of Huckleberry Knob, a natural bald and the highest peak in the Unicoi range. Alas, family and planning difficulties did not let it happen :(

Here are a couple photos of the place: 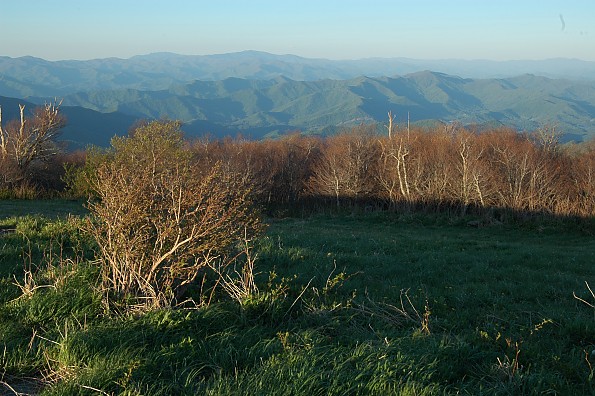 what a beautiful day for you both

I promised myself I wouldn't cry!

Congrats to you both as you sail into the mystic.

I bet a wedding at Huckleberry Knob would have been beautiful! I hate that you weren't able to make it happen! Destination weddings are NOT easy! I was lucky that mine turned out as well as it did!

:) Thanks! Make SURE you go to Glacier Point and do the Sentinel Dome hike. They are both on Glacier Point Road and have obvious turnoffs. I think Sentinel Dome is about an hour and a half round trip hike (might be less!) and it is truly like the top of the world. You can see the whole park!  Washburn Point is also a great place to stop on Glacier Point road! It is just a pulloff.

New here, but just wanted to say this may be the coolest wedding in history, beautiful place, I hope you guys have a great marriage and continue your love for the outdoors.