35 years on the road

Come June 15th I have been on the roads and trails of the USA for 35 years. I hitchhiked the first 5 years beginning with a 10,000 hitchhike from June 15th to October 28th 1977. I started in Hope, AR and hitched to Sodus NY where I had grew up from 1956 to 1972 when my parents retired to Arkansas. Then after a couple weeks looking up old friends I hitched to Washington DC where my brother at the time was a Xerox professor at a computer school in Arlington VA. I stayed at his place for a week while I explored Washington. Then I hitched to Denver CO where my mothers sister and husband lived andstayed a week seeing the sights of the city. Then up to Montana and Glacier Park where I worked for 3 weeks around the Fourth of July at the Lake Mary Lodge. I then nitched to Seattle WA and worked another few weeks as a construction labor living in Maple Valley and working in Renton Wa east of Seattle. From there I went down the coast of Washington state, Oregon and California going into and hiking Mt Rainer, Mt St Helenes (before the volcanos collapse), Pt Reyes, the Redwoods, into Yosemite and the high Sierra Nevada. The caught a ride with a trucker to L.A. and Mojave CA. I stood in Barstow for 3 days waiting for a ride, finally I walked for 2 1/2 days across the Mojave following the interstate fenceline 1/4 mile from the southern edge of I-40 before someone pulled over and offered me a ride. I made it back to Arkansas and home in midSeptember.

A month later after working a few weeks I hitched back to Seattle and flew to Anchorage AK and found work at a Wendy's Hamburgers shop. I worked there for a few months then took a better job cooking at Bob's Big Boy's and worked till June 1978. I hitched up to Denali Park with a friend and we spent the next 6 weeks hiking together till he had to go back and look for a new job. I stayed another 6 weeks till the end of August and continued hiking and taking pictures. I then returned too to Anchorage and took a job at the Capt Cook Hotel as a Chef and worked thru the winter till the following spring in May and returned to Denali for another 3 month summer hiking. I went back to Anchorage and to the Capt Cook Hotel. I was layed off in midDecember 1979 and went back to Arkansas and stayed with my folks thru the Christmas and new Years holidays then went out to Yosemite for the months of January to May winter camping.

Then came 1 1/2 years more of hitchhiking around the USA before I took up bicycle touring in September 1982 riding from Jackson Hole WY to Hope, AR. I began working just the summers after that and taking September to May off hiking, cycle touring, canyoneering, etc. ispent 278 winters from 1984 to 2003 backpacking the Grand Canyon from October to April. I did a 7000 mile bicycle tour from Wyoming to New York to Arkansas to Arizona and back to Wyoming in 1983-84. I have ridden back and forth from Wyoming to Arizona about 20 times since 1984.

In the spring of 2009 I moved to Flagstaff AZ and worked parttime for two and a half years before cycling down to Tucson last fall and back to Flagstaff after hiking downthere all winter. I am currently working and saving for my next trip to Utah to hike the canyons of the Colorado and the Green Rivers.

I guess I am forever a nomad and a vagabond. Living on the road bicycle touring with backpacking trips along the way is a great life I would recommend to any youg person before they get caught up in the bill/debt paying lifestyle  most have gotten caught up in. At 56 I have no debts, just buying food for 12 months  a year. I live on an average of $2500 a year. My hose is my tent, my bed my sleeping bag and/or  summer blanket and tarp, I cook on my camp stove and ride my bike instead of flying or taking trains and Greyhound.

Guess I will stop moving when my body lays down for the last time, hopefully in the wildernessso like Edward Abbey used to say, "cause worms and vultures need to eat too!"

What?  A trip report and no pictures?

Dude, you are the man.  I would have to say that you are one of my hero's in life.  Really, I bragged on you the other day to some friends.  Their eye's jsut got wide, they didn't even know what to say.

June 15th it has been 35 years since I hit the road in 1977 on my first 7000 mile hitchhike around the USA. Labor Day weekend will be 30 years since the beginning of my first bicycle tour. 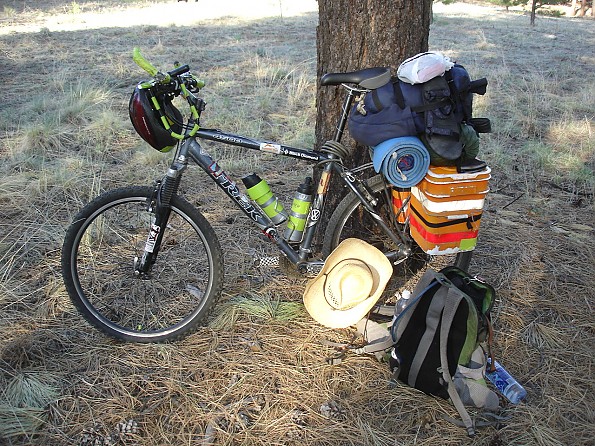 My whole life on my bike. Everything I own is in that picture. Thinking of getting another front rack to even out the weight. Get a wheely sometimes going up steep inclines with it all on the back. Have about 35 pounds of gear,clothing and such. Bike is another 35 lbs. I weight about 210 now.

Write a book...get it published, live off the earnings the rest of your life and hike/bike NO WORKY!

Excellent idea Gift.  Gary you really could do that.

That's alot of trail and road time my friend. I could only imagine the stories you have. I second gifto's suggestion and would definitely read it if ya went for it.

Oh, and thanks for taking us along on some of your journeys. I definitely appreciate it and I know others do as well.

GiftoGab, Is that your new BF with you or just some ole climber from Everest? :)

For the rest of us life gets in the way. Nice to follow your adventures.

"I went to the woods because I wished to live deliberately, to front only the essential facts of life, and see if I could not learn what it had to teach, and not, when I came to die, discover that I had not lived."

Climb the mountains and get their good tidings. Nature's peace will flow into you as sunshine flows into trees. The winds will blow their own freshness into you, and the storms their energy, while cares will drop off like autumn leaves.”

I do have a question about your 2500 a year you live on. Does that include bike tires,tubes, sleeping bag replacement, ect??

Tires and tubes are cheap. I buy usually from Walmart/Kmart not bike shops. Tubes I use Slime ones which last a long time. I get about 4000 miles to a set of tires and the tubes last about the same.

I ride 80% on the pavement so tires last very long.

Sleeping bags last a long time. I used my last one for 12 years, a goosedown bag from Golite. I just replaced it last winter with an REI PolarPod which is heavier and polarguard.

I once went 156 miles in a day in 7 hours with a strong tailwind. Aonother day I went 3 miles with a strong headwind. I spent most of that day huddled in an old shack beside the road because it was actually a sandstorm near Monument Valley.

I'm an admirer, too.  What a way to stay in contact with what's "real."  I'm sure you've already looked it up, but here is a starter site for a good buy that may go with your lifestyle:  http://www.bing.com/shopping/kamprite-midget-bicycle-camper-trailer/p/4A84622D5BE2D0445003?q=bicycle+campers&lpf=0&lpq=bicycle%2bcampers&FORM=CMSMG

Best wishes on the road!

That looks awfully much to me. I used a trailer once,borrowed from a friend for  trip from Wyoming to Arizona. I still had my old rear bike rack on my bike too. I stopped about 1/3 of the way in Utah and sent the trailer back. I told him no pun intended but I decided that pulling a bike trailer was a real drag. After putting my gear back on the rear rack I was happy again.

I travel fairly light using the same gear for hiking as I do for cycling with my 4 lb Mtn Hardwear tent, 3 lb REI sleeping bag, 1 lb Ensolite pad, 1 lb MSR cookpot and stove, one change of clothing, 2 pairs of socks, helmet, binocul;ars and small point and shoot digital camera.

I use the homemade panniers above in the photo for my food, I left the bails on them which makes them easy to carry off the bike, they are also good for seats and bringing extra water back from a water source. I also use them occasionally for caching food and extra supplies along hiking routes to deter animals like raven,squirrells and other rodents from getting into them. They are as light empty as their nylon brethren. They are waterproof and also insulate some perishables from the heat and cold.

Gary, I envy you in so many ways, the simplicity of your life and the experiences you have on the road.  I hope to get in a little better shape and take up biking to some touring and what not.  Probably nothing like you are doing but I hope I would still get a round.

On the way back from the WCT trip as we were waiting for the ferry I met a couple from England that were on bikes too.  The had been traveling for a year and a half and so far had seen 11 countries, the US would be their twelfth.  What a way to spend your retirement!!  Or at least a extended vacation!

Wolfman says: Oh by the way, I think that Big Sis's Dad! Hmmmm? I don't get it?

Big Sis is Giftogab's trail name from her Everest Trek.  I think it is a fitting name for her and their for refuse to call her Giftogab any longer.  No matter how much she likes to talk!  :D

Anyway, I think that's her Dad in the photo, but I am not 100% sure.  I just though it was a little funny that you were asking about a boyfriend.  Some things are just more funny to me then others.  :D

Hope that clears it all up.

I think that's Jim Whitaker in the photo with her.