I only had one night to use last weekend and took off on a mid day start to my beloved SmokyMountains.

I started from a roadside pull-off near Cades Cove area and tramped over to the AnthonyCreek trailhead. 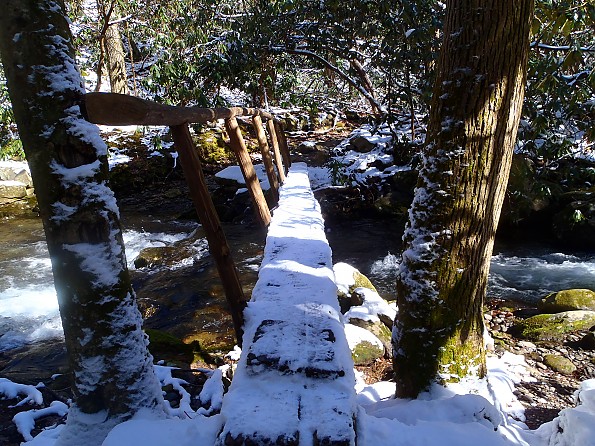 This was the first of three friendly footlogs. I give a little mental cheer for these in the winter. 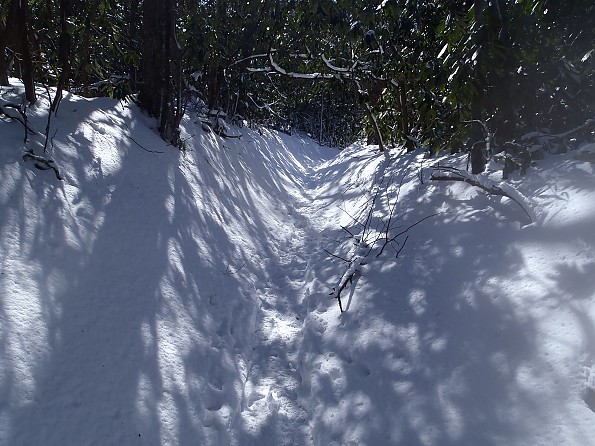 This was the trench –trail of Bote Mountain with a good solid snowpack. 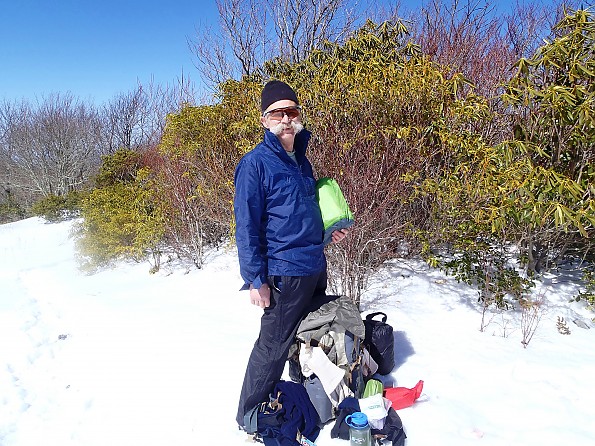 At the north end of Spence Field I met Gary, a 72 year old thru-hiker who started pretty early for an AT thru-hike. As he stood in this photo he was 180 miles in with about 2000 to go. If you read this Gary, be encouraged, you are living the dream! 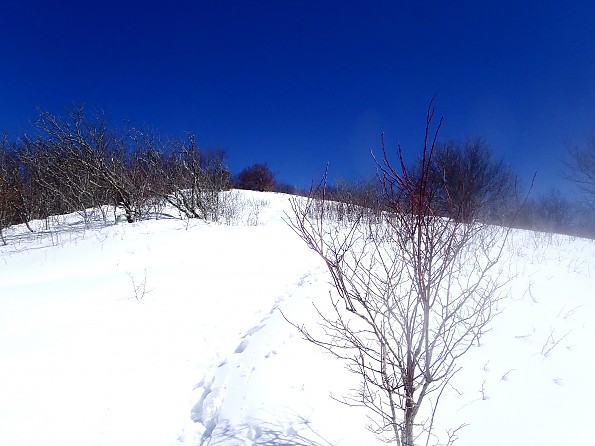 This was on the way up to Rocky Top. Man, I’m getting tired just looking back at the photos. There was a solid 7 inch snowpack with sections over two feet deep. I found it almost as tiring to try and match up to others post holes as it was to make my own. Almost….. 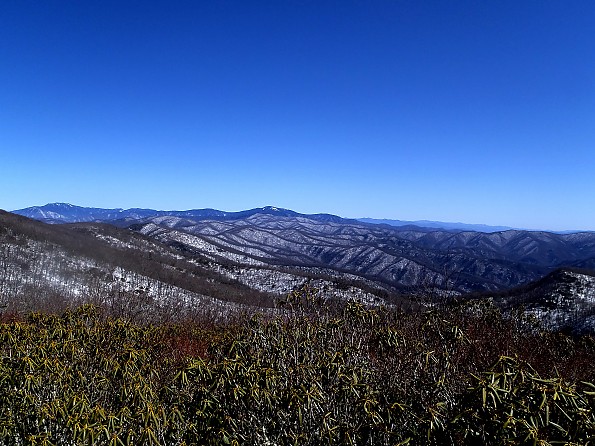 This was the west / northwest facing view from Rocky Top. 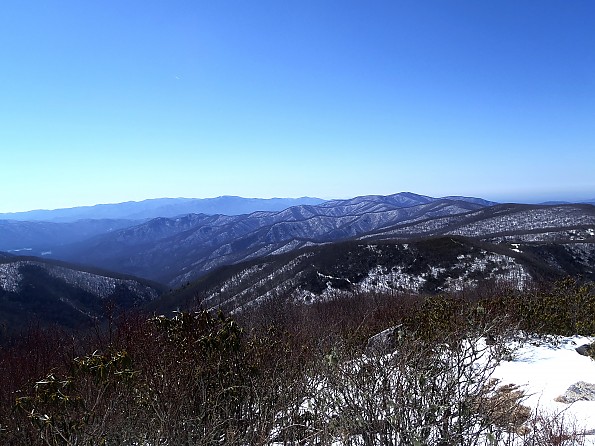 This was looking South across the BMT and towards the Unicoi range. FontanaLake is just visible in the far left. 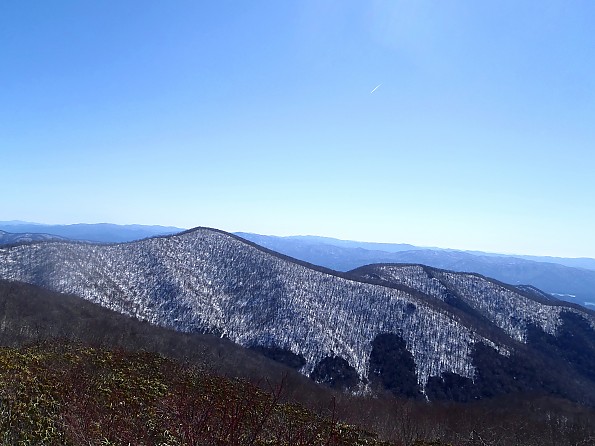 This I believe is Haw Knob and my next intended destination for the afternoon. 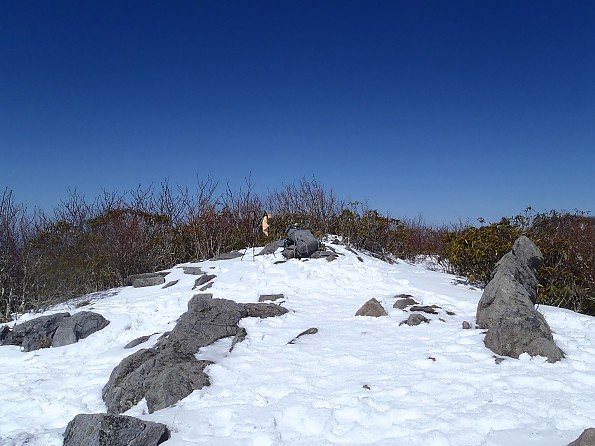 My gray pack blended really well with the rocks on Rocky Top. 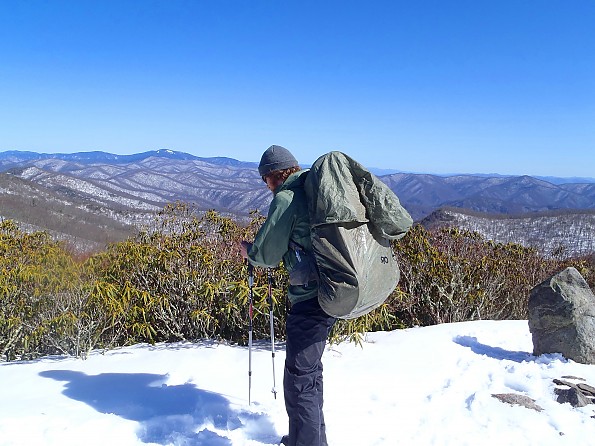 I had lunch with Zak; he was flip flopping back to Pennsylvania to finish his thru-hike. He only had 1000 miles to go. (only….) 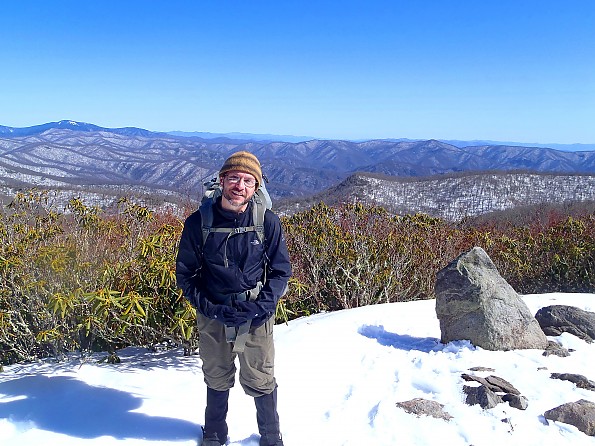 Yep, I had Zak take one of me too. I will also appear briefly in his thru-hike video. I’m in a lot of thru-hike videos but I never see them posted anywhere..lol.

After trekking out Jenkins Ridge to Haw Knob and totally tiring myself out I went back up to the AT to be a rule follower and camp at Spence Field where my reservation said I would be. 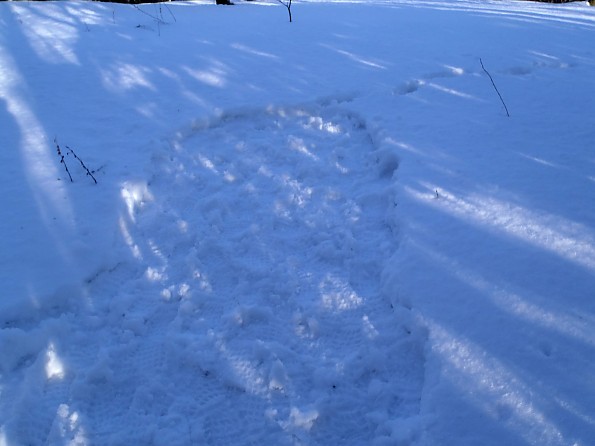 Luckily the shelter was full so I was able to tent camp. I stomped down the snow pack in a rough rectangle to match my bathtub floor. 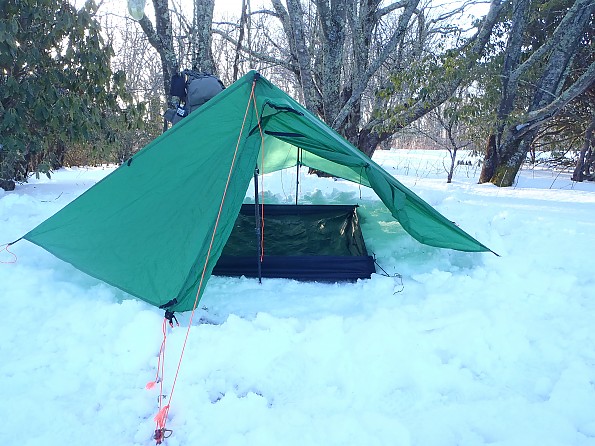 Later I made little snow walls around the edges to block some wind. It was a really cozy camp but you wanted to stay on your sleeping pad while messing about the tent. 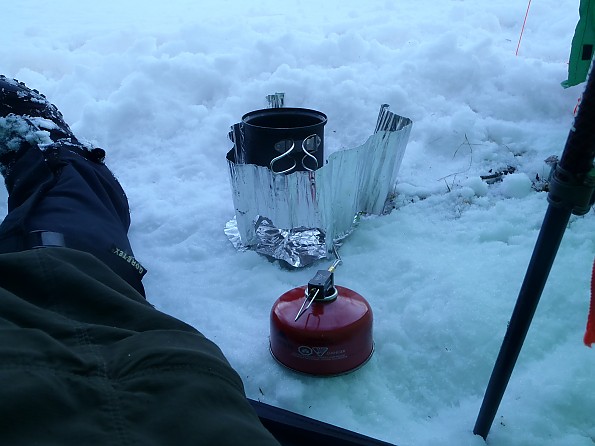 Despite the snow pack it wasn’t really cold at all and I didn’t even need to invert my canister stove. 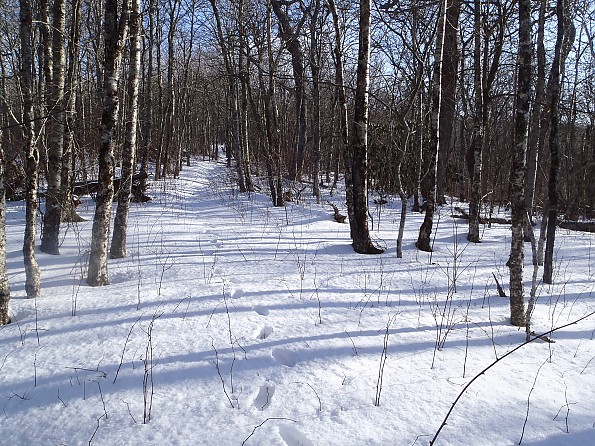 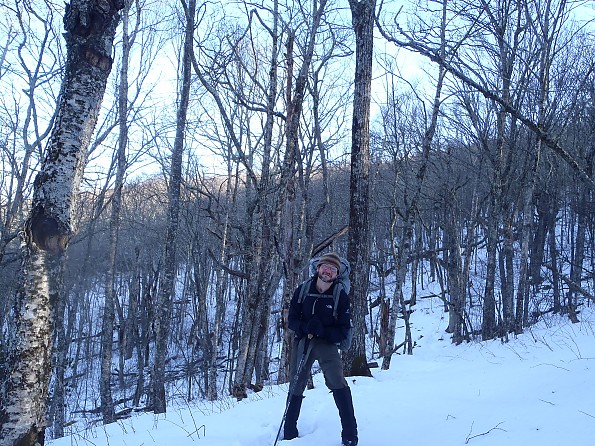 The next morning I attempted to follow an old route that roughly parallels the AT (I have some old park maps from the 50ies and 70ies) but eventually hit too much bramble and had to cut back down to the main trail. 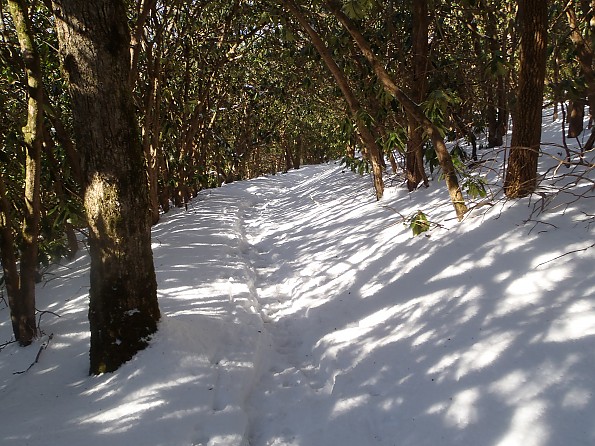 I was nearly to Russell Field when the sun came out. 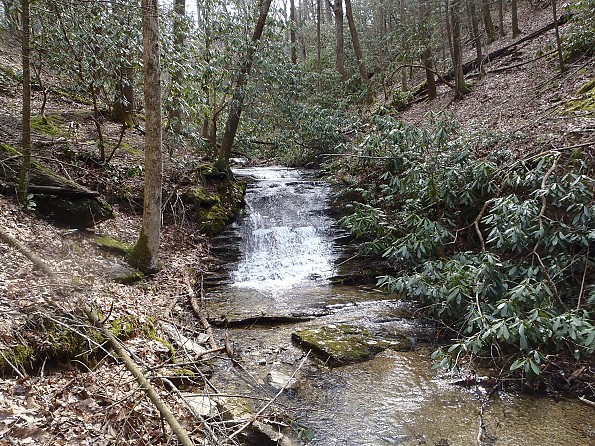 I’ll end with this off-trail shot of a little cascade I encountered on the bush whack back to my car.

Thanks Caleb, I do in fact love foot logs! While they are a little scary when ice covered it's better than debooting / rebooting or getting the boots wet. Although, keeping dry feet in winter seems to not really be possible for me. Either water or sweat will happen it seems.

With all the recent discussion about cold weather hypothermia I’ve been thinking a bit about falling in during crossings lately.

Did you see where a hiker died at Tri-Corner Knob in the Smokies last January? The word on trail was that he died from hypothermia simply from getting rain soaked, without proper gear and lost his wits to the point where he made no efforts to get warm other than lying down in the shelter. However, I could not confirm that on-line other than in a few forum posts.

Of course a kayaker died in the hospital yesterday after getting rescued from the Sinks Monday, where was pinned underwater.

And while looking for those links, I saw where a man was hospitalized from falling while hiking up LeConte last Saturday while I was on Thunderhead.

Geez, I made this a morbid post. The GSMNP can be a dangerous place for what I mostly think of as an area of recreation, you know, fun-times and all…

Patman, very nice post. It goes to show that even a day in the woods can be a wonderful thing. I really miss the green trees and flowing waters. Up here we still have another 2 or 3 months of ice and snow with low temperatures of -30C or so. But at least the sun is up now.

I guess I'll stop grumbling about the fact that I've been trekking and camping in snow since last november around here. lol

Beautiful photos Patman and it is inspiring to see people in their 70's out there thru-hiking.  Thanks for sharing.

Thanks for sharing! Looks like great winter camping. My son and I stayed at Hawk Mountain Shelter (Ga. AT) in Mid February and had the pleasure of hanging out with Zach for the night. He is good example of great people you can meet in the woods.

Nice report, Patrick! What a beautiful day! I love the pictures, as always.. Thank you for sharing.

I had planned a Smokies snow hike myself last month from the AT trailhead just past Fontana, going towards Shuckstack and staying on Gregory Bald (2 night). It was on that weekend where a ton of snow dumped on the Smokies and there were gale force winds and temps in the 5 degree range, so we had to change our plans and go from Hot Springs to Rich Mountain instead. This was actually a really nice overnight loop! You might should look into it sometime of you are looking for a new place. I'll try to get a report up soon.

Ya’ know I keep waffling about whether or not snowshoes are really worth the investment for me. Last weekend was typical in that we often only get snow deep enough to be a factor above 4000 feet or so. It’s just so sporadic around here that it’s hard to justify them. Not that I’m afraid to be a trendsetter, but I will note that I’ve never seen anyone wear snowshoes in the Southern Appalachians in all my years of trekking around here.

Thanks and I agree, it gives me great hope for my future to see retired folks hitting the trail like that. Heck, look at my buddy Tipi Walter, he’s 62 and I’ve never seen him start a trip with less than a 75 pound pack!

That’s neat that you met Zach also. He is a good example and you’re right: I usually meet great folks with high character in the backcountry.

Sorry you had to miss your plan, but I’m sure ya’ll had a good time. I have done that section myself (actually I’ve done everything from Fontana to 19E north of Roan Mountain and many sections more than once). It is really nice. I look forward to seeing your report!

Another great report, from my favorite part of the world. Thanks Patman. 49 more days till I am back there.

Enjoyed viewing this and inspiring to see Gary doing the AT.

This might be the first TR you did without a wet river crossing. I've gotten so used to seeing those in your reports!

Yeah, I heard about the guy at Tricorner. Sad. I think that cold rain is the single greatest risk for most less-experienced hikers in this region. The frequency of the "perfect" hypothermia conditions (cold rain followed by fast drop in temp) are so often underestimated. Tipi mentioned similar thoughts in his last report.

Glad that fellow on LeConte came out alright.

I hadn't heard about the guy at the Sinks. Last year a middle aged man drowned on the Ocoee when he fell out on a guided raft trip. Truly tragic for his family, but I was disgusted when they tried to sue the guide the company he worked for.

Thanks for this snowy report, Patman.  When I'm carrying my standard heavy load I hate those ice covered log bridges!  One small slip with 75 lbs and I go into an intricate series of catastrophic stumblings.  Fun for those watching, hellish for me.

I ran into several groups winter camping in tarps on my last trip and they had it rough when dealing with ice cold wind blowing thru.  Of course they were set up on the high ground with little protection.