My daughter's spring break at Grenoble Polytech was the last week in April, so I went back down just three weeks after returning from the last visit for another week of ski mountaineering, this time with Molly and her boyfriend Audun (other friends had shown interest in coming along but in the end it was just us three). We made ambitious plans to revisit the Monte Rosa massif and spend some time on the Italian side (better food, cheaper huts), but it snowed a lot at higher elevs on the Saturday that I flew down and that raised the avalanche hazard, so we went over to plan B to be sure we could stay out of trouble.

We rendezvoused in Zermatt and ended up staying there two nights and used Sunday for an on-piste acclimatization climb and descent (tip: the Bahnhof right across from the train station has dormitory style accommodation and a full kitchen for a pretty good price, for Zermatt anyway). Here's a handsome tabby cat in Old Zermatt: 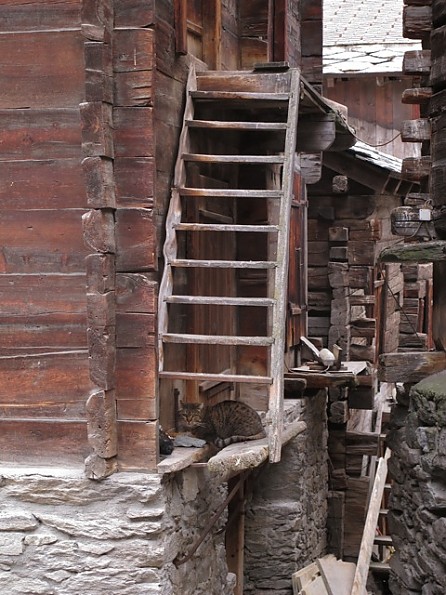 On Monday we took the train back down valley one stop to Täsch, then started out rather ignominiously on just enough snow to (sometimes) grease the road up the valley wall. 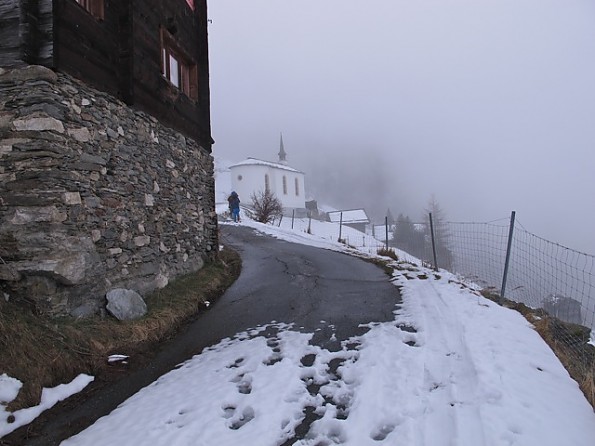 Further up near the end of the road we had to go around a massive wet snow avalanche that had come down the day before -- I guess staying the extra day in Zermatt was a good idea. 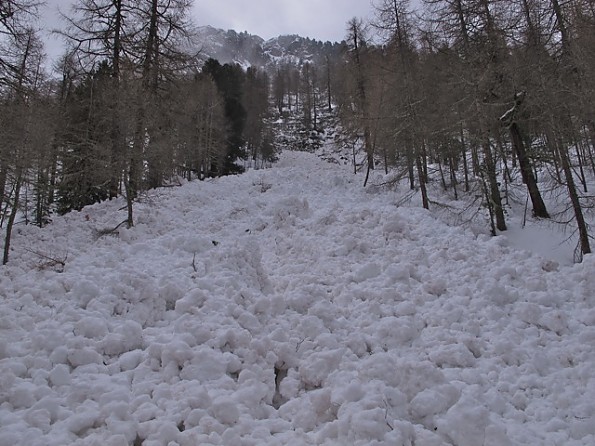 We stayed that night at Täschhütte at about 2700m, with only five other guests in the hut. Up at 4:30 AM, but we stalled a little for some decent daylightbefore setting out. Here's the Weisshorn in the morning light over some valley cloud. 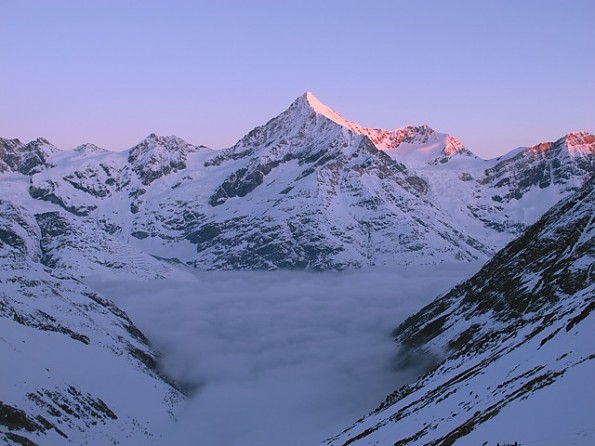 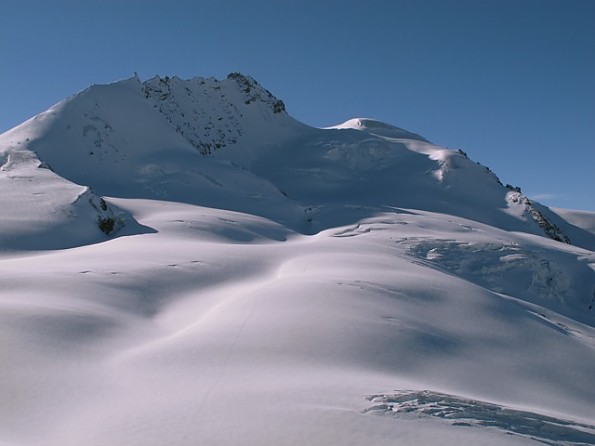 We ascended a few km up one glacier, then after a short descent climbed more less up the middle of the picture above to the sunlit saddle just right of center, following in the tracks of the two groups ahead of us and roped and ready for the crevasse hazard.

From the saddle we ascended toward the ridge on a steepening slope to the base of a couloir where we traded our skis for ice axes and crampons. The couloir steepened to about 50 degrees near the top and mostly had plenty of snow but there were a few thin spots with ice and rocks under the snow. 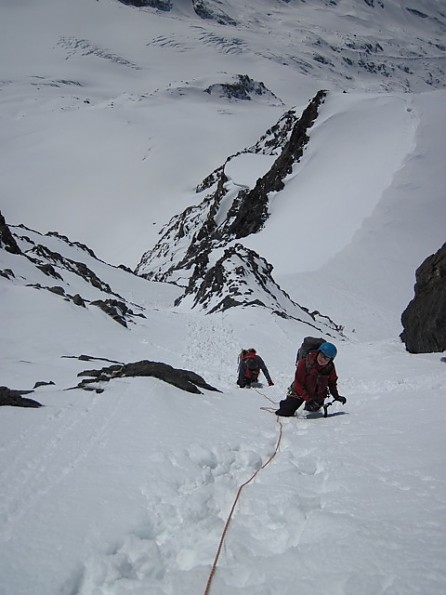 (photo of Molly and me by Audun). We reached the top of the couloir at about 2 PM, too late to make the 1 hour+ scramble to the top, descent, and ski onward to the next hut in good time, so we decided to turn around. Heavy wet snow on the sun exposed slope below the couloir (that's Molly in the picture below) then a few hundred meters of powder on a north slope before a long slog and sloppy descent all on glacier. 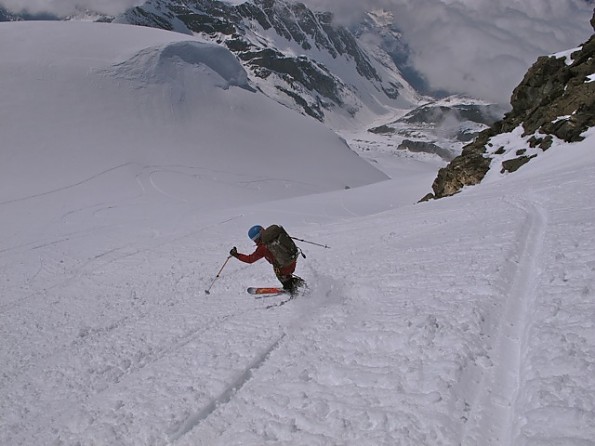 We arrived at Britannia Hutte at about 5PM, pretty well fried by the combination of altitude, heavy wet snow, and all-day sun. We stayed there for three nights (awesome but pricey rosti!)

On Wednesday we took it a little easier by going for the 3790m Fluchthorn, accessible by ski right to the summit. 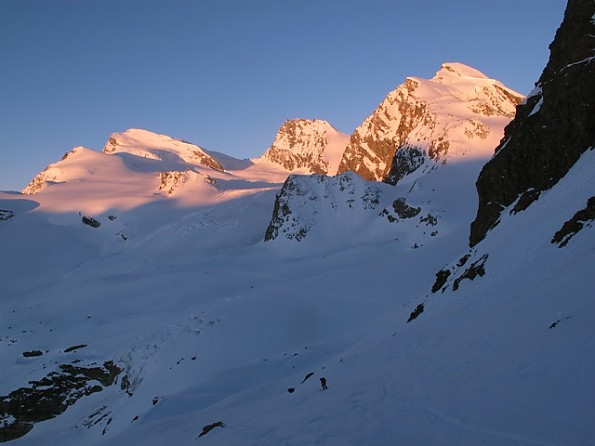 The Fluchthorn is the bump on the L side of the Strahlhorn on the left of the photo, Rimpfischhorn in the middle, Allalinhorn on R.

We summited before noon. There were clouds to the South over Italy all day. 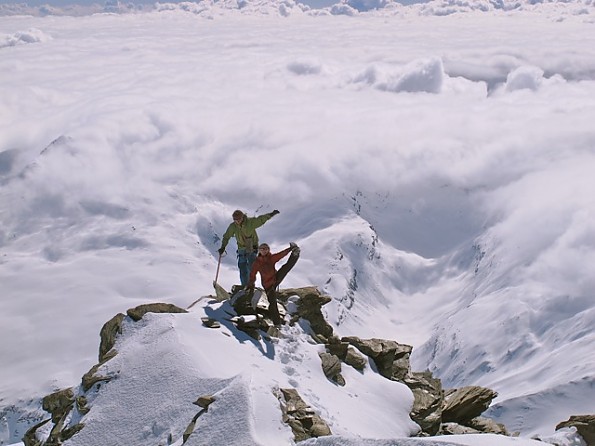 THe main up-down route was pretty well skied off but we tried an alternate descent on a NE facing slope and managed to cop some powder and stay out of the crevasses. Lower down we ran into more heavy snow and got swallowed up by some of those Italian clouds but made the best of it before slogging back to the hut.

That night we got treated to a full moon and some alpenglow off to the east. 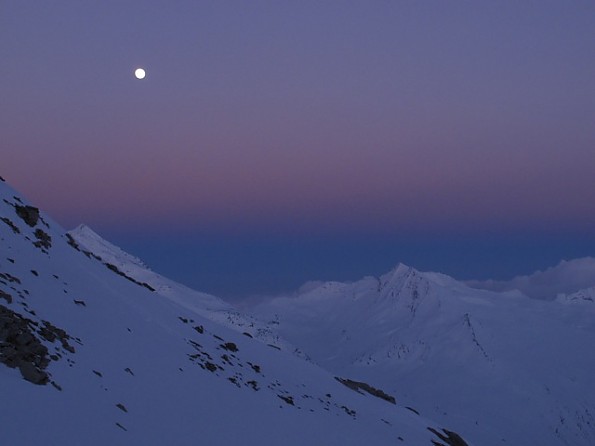 On Thursday we summited the Strahlhorn (4190 m), the first Alpine 4000er for all three of us! Some steep climbing on skis to gain the ridge but otherwise pretty straightforward. 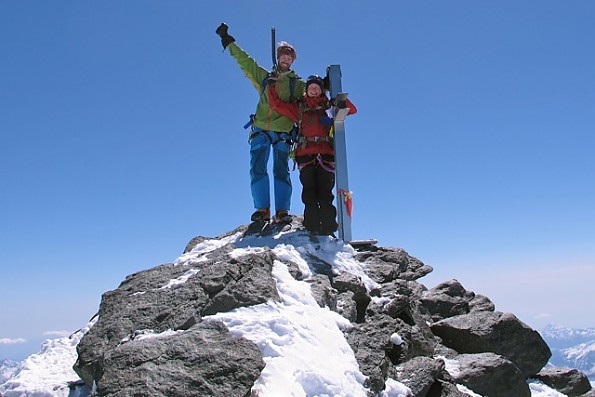 I'll spare y'all most of the scenic shots and panos but here's Mont Blanc peeking shyly over the shoulder of the Matterhorn as seen from the Strahlhorn.

We still had a couple days but the weather forecast was not good so on Friday we just descended to Saas Fee and headed back to Grenoble for some R and R and good French food. Three bluebird days in a row isn't too bad!

The early mornings, sometimes crowded huts, altitude, intense sun, and wildly varying snow conditions make for some long and intense days. As noted by ppine in the previous TR/thread the huts bring a lot of people into these mountains so there's not a lot of solitude and no real wilderness here (except maybe in places too steep and inaccessible for this mere mortal), but it would be a lot harder (and more unlikely for me anyway) to do a casual trip like this without them, so I guess that's the trade off. It will be nice to do some smaller and less overrun peaks here in Norway in the next month or so, but I'm also definitely up for another Alpine trip sometime in the future!

Really enjoyed your TR. I have got to get back to Switzerland someday soon (and Scandinavia, too!). There are a bunch of peaks around Zermatt and Grindelwald that I want to do (and around Chamonix, as well). And I need to get a bit of skiing done in those areas.

But I do have an obligation to get back to the Dolomites to spend some time climbing with a friend who lives there.

Too many things on the Bucket List, and not enough time to do them all!

..Too many things on the Bucket List, and not enough time to do them all!

Don’t forget the Pyrenees;  they are great mountains too, and huts with the warm hospitality of the Spanish.

Much as I enjoy and intend to keep on with snowy mountain adventures, I have to admit that some warmer places are trending on my list. Hawaii, Venezuela, more slot canyons, and now Ethiopia, to name a few.

Most of the wildness has been systematically beat out of Europe for at least 8 Centuries.  I don't really like the European approach to the outdoors with huts, hostels and villages everywhere.  Give me North America anytime.

I liked the Alps  because of the food and wine and novelty.  The Swiss are too tightly wound.

Why did my people ever leave that area?

Red, that is super cool. I'm sure its worth whatever crowds need to be endured. I love trip reports.....

Very, very nice trip report! I think it's awesome how much you get to do with your family. Impressive!

Wow! I have to put that on my list of destinations. Love the climbing pics.

You make me very jealous with these adventures! Thank you so much for sharing them with us.

I've said it before, but it is so freaking cool that you do these climbs with your daughter. I hope the kids I have someday will be interested in such things, and that I'll be a dad with whom they would want venture to the wilder places.

Thanks for the + feedback everyone!

I think it goes without saying that I am very happy to be getting out and about with both my daughters even as they go out on their own. For me it was kind of a special honor to be invited along on the first trip, which was initiated by one of Molly's friends who didn't know me at all.

Weekend before last I skied Kirketaket, one of the best ski peaks in Norway, with daughter #2. She has wanted to finish that one off ever since we backed off of it due to high wind and rough snow conditions 3 years ago, and this time we had a beautiful day with near perfect spring snow conditions.

Those outings are getting farther and fewer between, but I still hope I can keep sharing adventures with my girls for many years to come. I dream about getting the whole family back to NZ because it has a special place in my heart and I've told the girls a lot of stories about various adventures there. Maybe someday.

I keep coming back to this one. The Alps seem truly romantic.

Every time someone speaks of the Alps (Swiss) I think of James Bond, avalanches, wool clothing, and "The Eiger Sanction".