The Waptus River in the Alpine Lakes Wilderness in Eastern WA is a favorite place of mine.  A perfect place for someone's first backpacking trip.  We hiked 3 or so miles.

Most people might balk at taking five kids backpacking but the older three of mine are pretty salty mountain kids so it was really pretty easy.  I can’t believe I have a daughter in high school now!

Bright jerseys; easy to see in the woods. Numbered to help me keep track.  We brought the little dog along this time too. 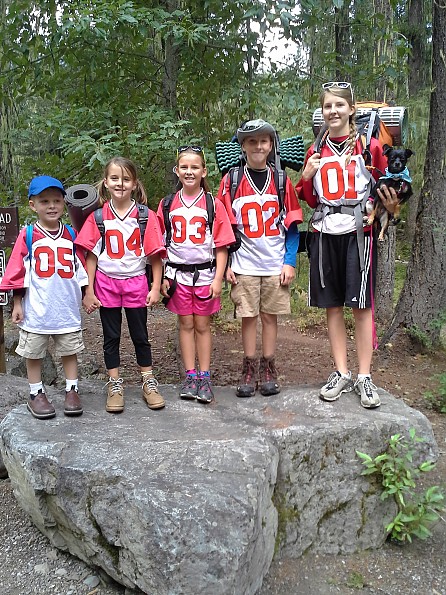 The first thing to know about kid packing is that there are not enough gummi bears or granola bars in one zip code to satisfy them so pack about 3X more than you think is necessary.

The second is that five year-olds are unique backpackers, capable of hiking speeds of upwards of 150 questions per hour.  Try to keep up.

Eyes on the back of a pack are a cool idea.  He's carrying his sleeping bag, plastic binoculars and one Mountainhouse dinner (Mac n' Cheese of course).  Ok, its not a real backpack, just a sack with straps for carrying a sleeping bag.  Next trip I'll let him carry the tent and all the food ;) 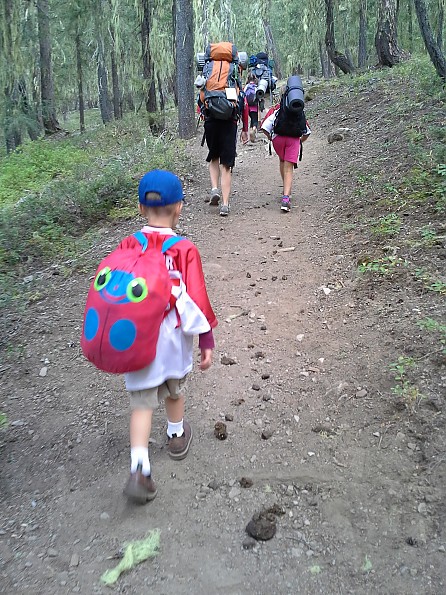 The older kids brought their own tent so they could have some independence.  Also there was no way I was carrying two tents so they kinda had to if they wanted to sleep in one. 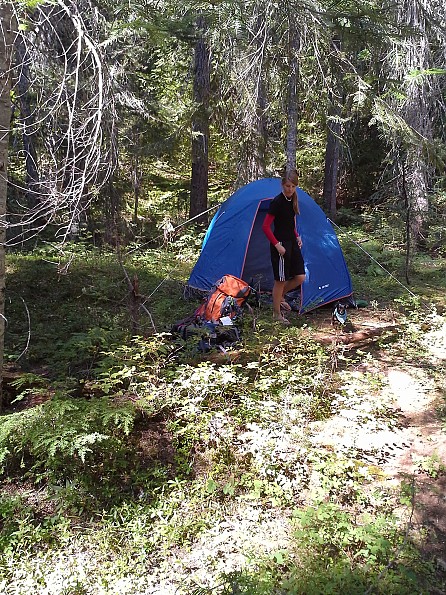 My tent, the youngest named it "Thunder Boy" 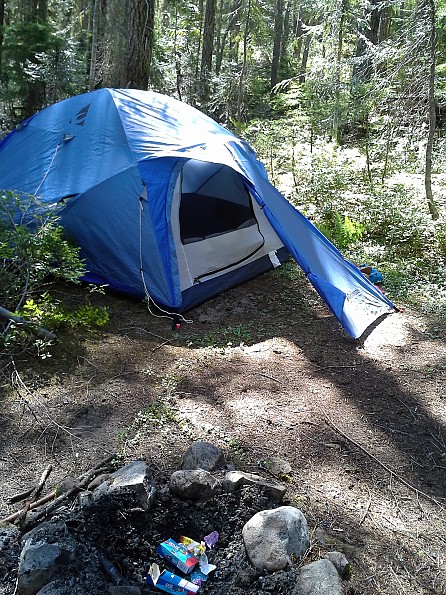 I don't know if these falls have a name. 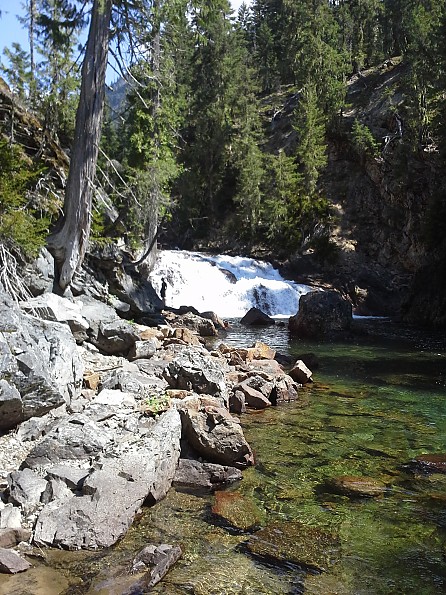 Now my son knows the answer to, "Where does the white go when the snow melts?" That was question #322. 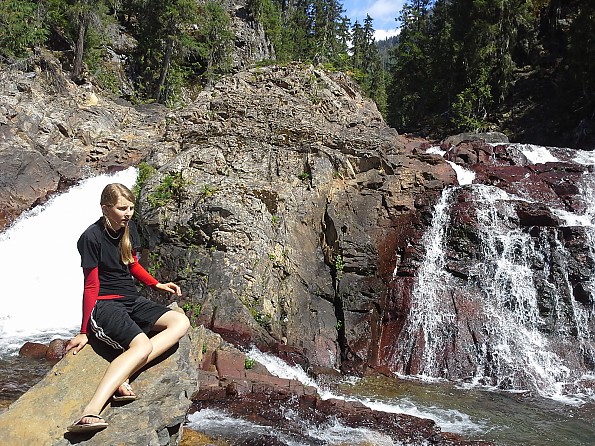 We spent a lot of time at the river playing 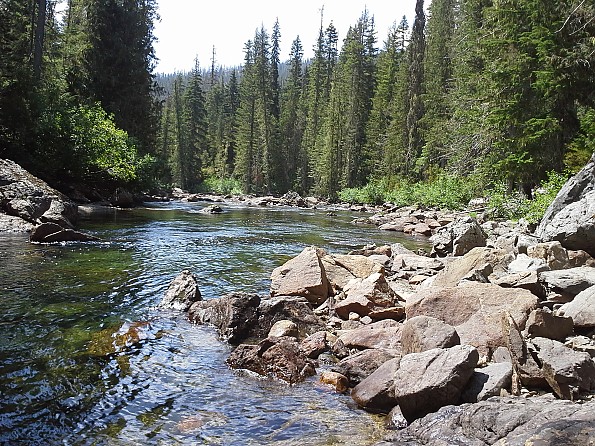 We don't get to see many trees at home 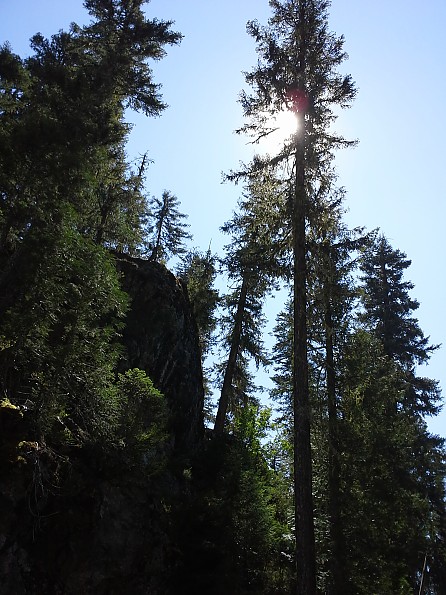 I think he threw about every rock there into the river. 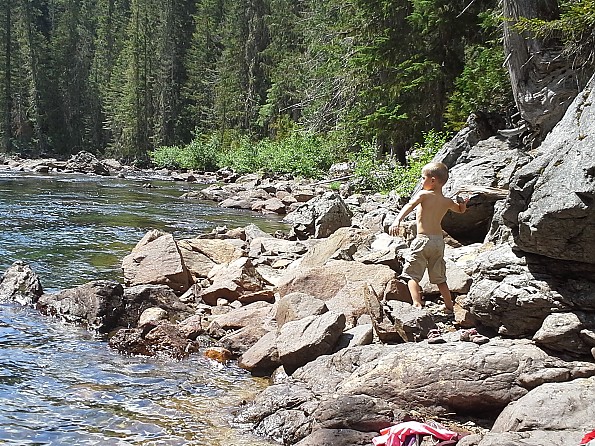 Cold.  This stuff is pretty much just melted from a snowfield upstream.   That expression is pain, numbness followed shortly after. 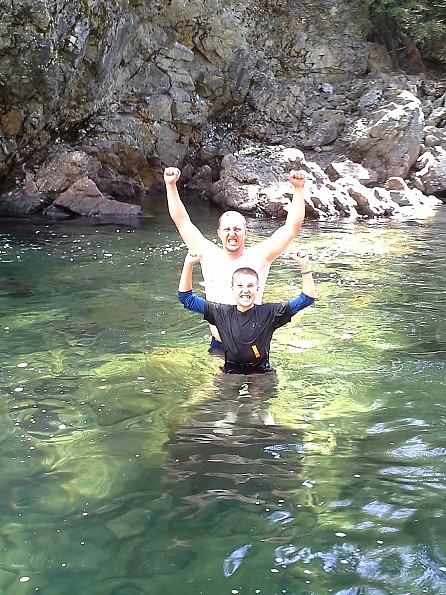 Diverting the creek near camp.  I rested on a log, thinking back to when I had that much energy. 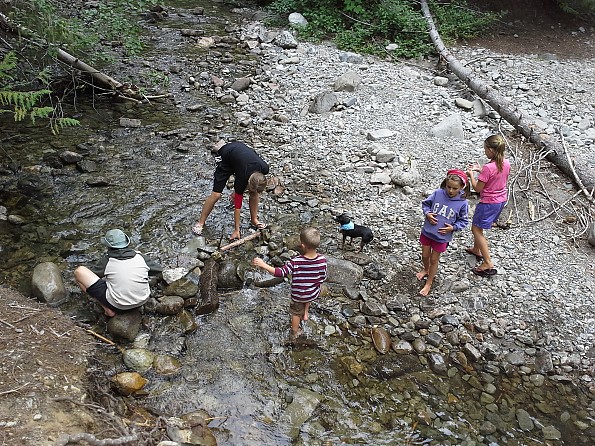 You only get a finite amount of campfires in your life with your kids, enjoy them. Luckily there was no campfire ban this weekend.  I don't often go places where you can cook on a fire, it was  nice. 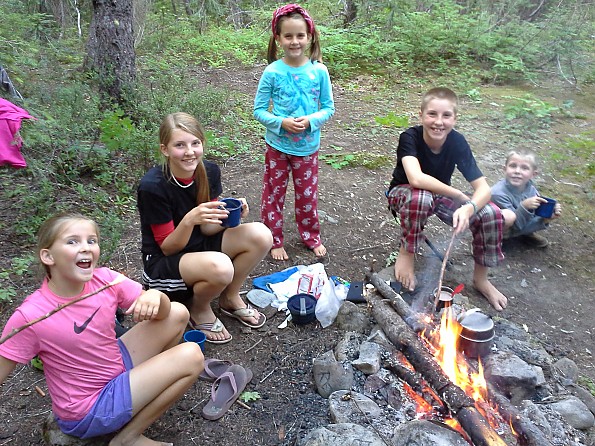 We ate a Mountainhouse dinner, mostly b/c its so light and everyone carried their own meals. I had already tested it at home so I knew the kids would eat it.  Of course we roasted marshmallows too.

Flip flop sandals or just bare feet were the order of the day for camp wear.

At night the little ones all wore glow stick to help keep track of them. 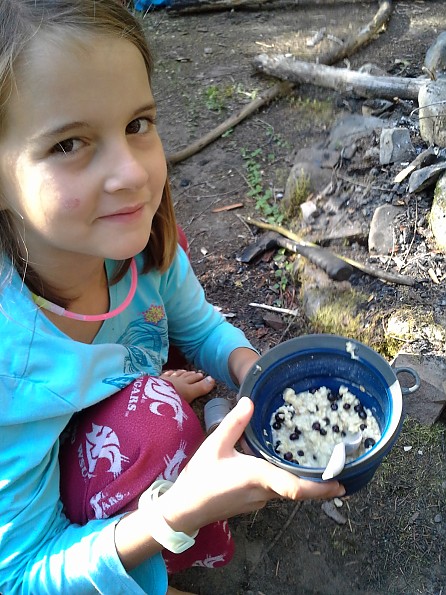 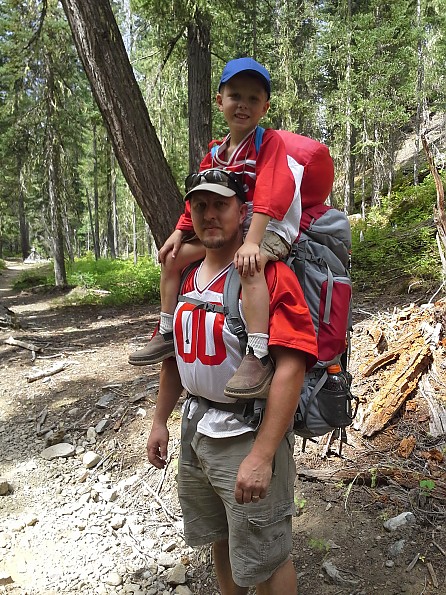 He rode for a half mile or so, then wanted down. 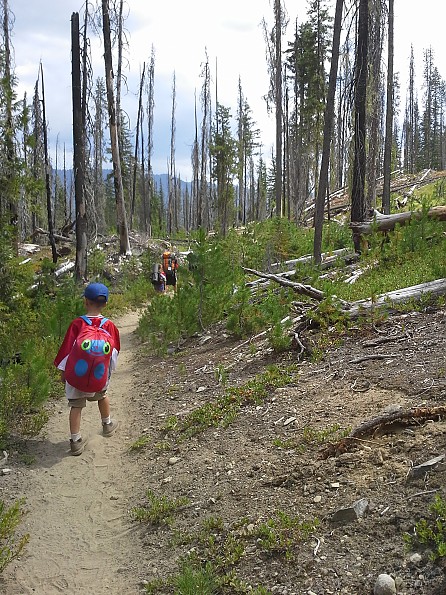 The kids have been hiking since they were all four of five so taking one more isn't that much more work.  I only had to carry my own gear, an extra sleeping pad and the snacks, the bigger kids all carried gear for the smaller ones along with their own tent.  Since it was a short hike no one minded a little heavier pack.

Someday I'll write a book on camping/hiking with kids.

This is a great report Jeff! I love the numbered shirts. Again, you may be the coolest dad ever. What fun.....

What a great trip!  It sure makes me miss the days when my kids were young...

Make me think of the woods when I was a kid and camped in them 300 feet from the house.

Great family times you have..I think you need to write that book.Because you do it right all the way..

just fantastic. I can't wait until my four year old and one year old daughters are big enough to head out with me. looks like a fantastic place too. you have a lovely family.

That looks positively awesome. You've got the dream.

great trip report. I like the shirts, and the campfire shot. reminds me of car camping when I was a kid.

Thanks for the awesome trip report. I had a successful 1-nighter with my 7yo a few years ago. The next trip was a disaster, and he's refused to go with me ever again. Looks like you've been successful with 5!

Great report, Jeff! I love the idea of the numbered jerseys. It looks like you all had a wonderful time! What a great experience this must have been!

One of the best trip reports I've ever read...love the shirts...thanks!

you are the man, Jeff!

I love eastern WA. Kids in the outdoors are a natural. Start em young and keep taking them. You are really good at taking the young ones. I really like that even the little kids carry stuff, and have their own tents. You are creating skills and memories for a life time. You don't have to go far or go for long, just keep going.

Way cool!!  Love the pics.  What a great dad you are!!  Beautiful fam.