The last two weeks of August and all of September are always my busiest time for teaching, but this year I managed to get out of town for two weekends, with the convenient excuses of showing Hans, a visiting student from VT, around and also getting out with my older daughter who came up from Oslo for a visit on the second weekend. And I managed to get to two summits that have been on my short list for many years but just took a while to get around to.

The first was Innerdalstårnet ("the inner valley tower"), which is one of the peaks the draws the eye away from bigger neighbors whenever it's in sight, and also one of the main reasons that Innerdalen often lays claim to being "the most beautiful valley in Norway" (but it has some serious competition). 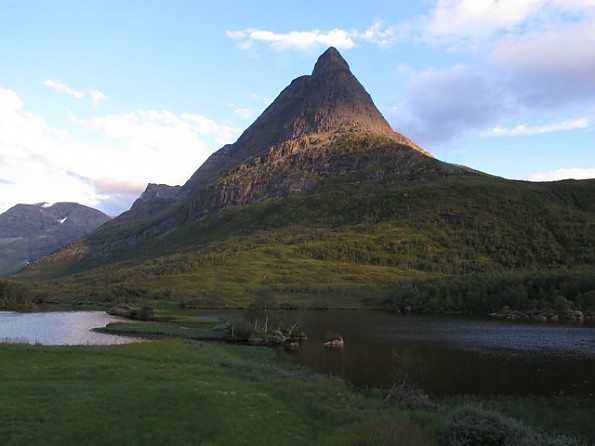 With the days still long we had an early supper in Trondheim and did the 3.5 hour drive and 5k hike into the hut on Friday evening. We stayed at the old Innerdalshytta, formerly a private mountain lodge that was abandoned for a period after the owners (last name: Innerdalen) moved their operation into a newer and more practical ranch style (sort of) hut nearby. It was eventually refurbished by the local club, Kristiansund-Nordmøre Turistforening, with some of the hut fees (presumably) going bank to Herr and Fru Innerdalen. It's a funky, rambling old log building with not straight line or level floor left in the place, and that makes it all that much more charming. 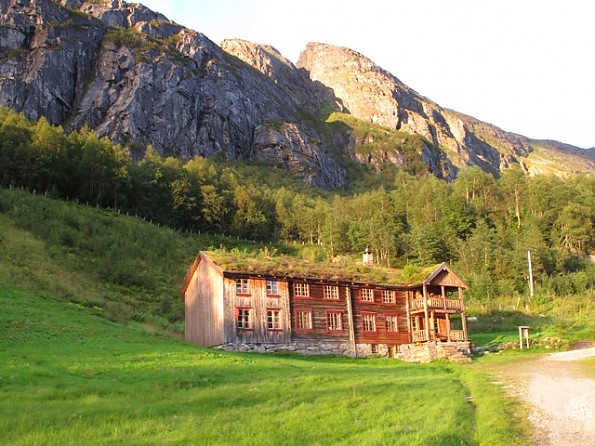 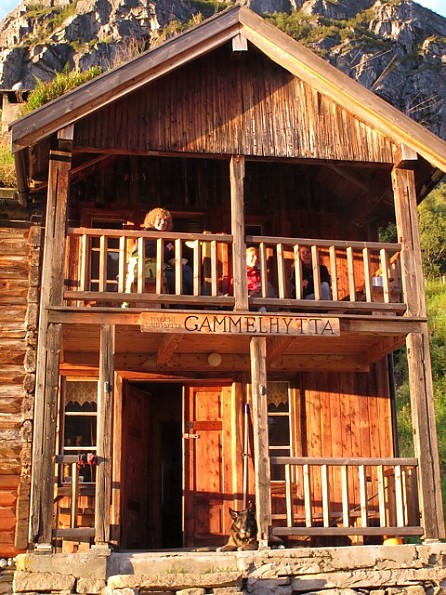 Our route took us up into a hanging valley to the right of the mountain in the picture above, then up a steep gully and to col that divides Innerdalstårnet from its bigger neighbors further along the ridge. 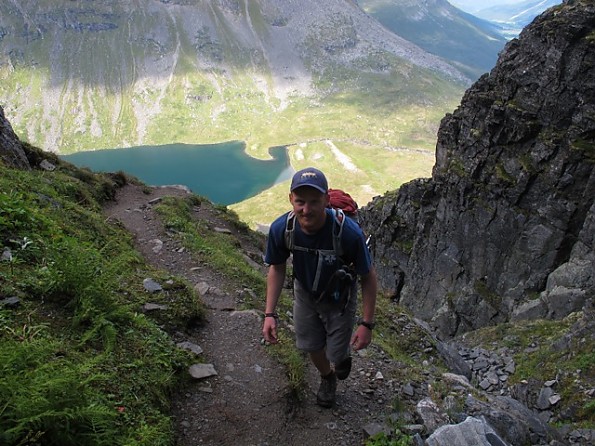 I knew there would be some scrambling but I thought I might be able to get Ralphie up to the top but it was too steep so he had to stay, unhappily and noisily, down in the col. 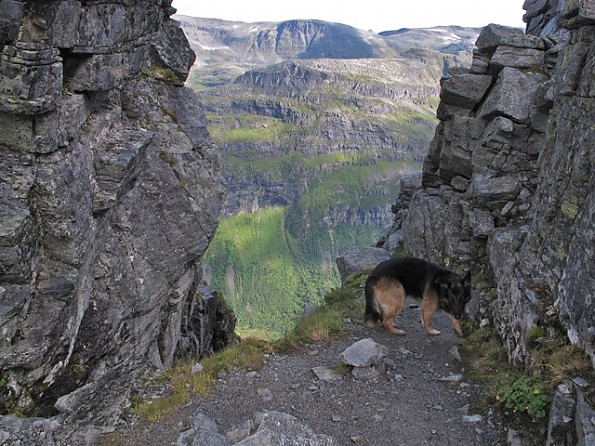 I had thought the last bit might be a more exposed ridge, but it turned out to be easy scrambling on a broken up face. 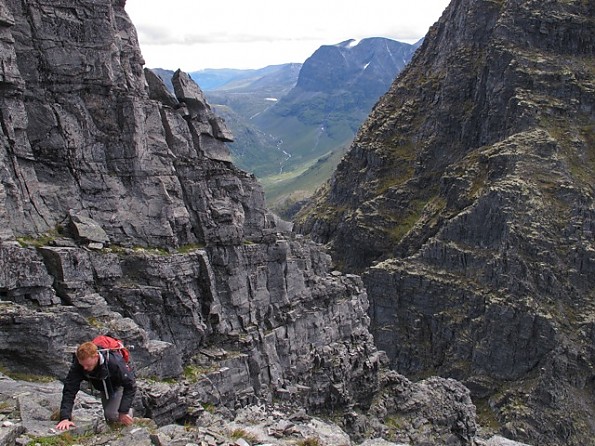 We were first on top for the day, here looking back down on Innerdalen and out towards the coast. 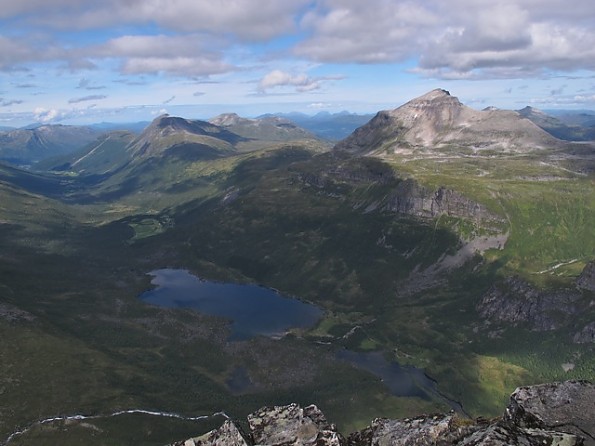 By the time we rejoined Ralph in the col there were a dozen people headed up to the top (below), and lots more coming up the gully. 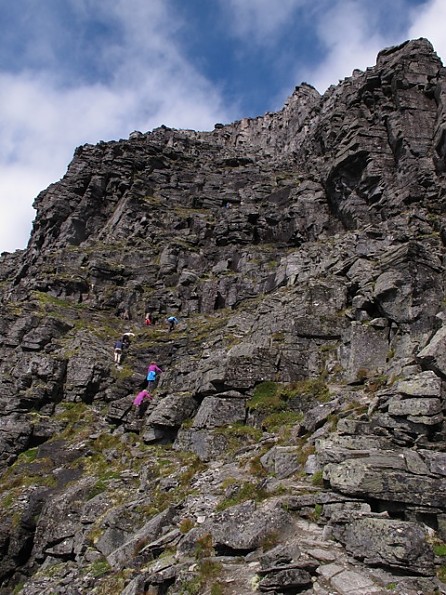 We though about heading out that same day, but instead just kicked back at the hut for another night and had a leisurely walk out and drive back via scenic Sunndalen the next.

Ok, here comes part 2. My daughter Molly took the night train up from Oslo, arriving at 7 AM. We (me, my wife, Hans, and Ralph) picked her up at the train station and headed for the hills. Our goal was 1885 meter Storkalkinn, starting almost at sea level in Sunndalen, making it one of the biggest bottom-to-top ascents in Norway -- and don't let's forget about the descent by the same route! The drive was 3+ hours, so we didn't exactly get an early start.  There were some low clouds about, but we just hiked up through them. 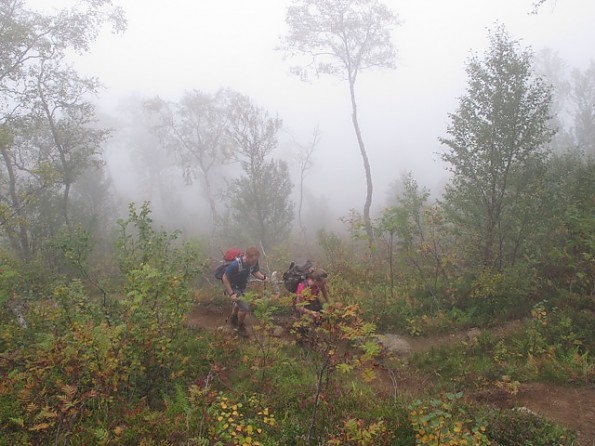 My wife's knees aren't up for the whole ascent, and there's some scrambling that I knew I couldn't get the dog over (tried it a few years ago and had to turn around) but she and Ralphie accompanied up the first 700 meters to the entrance of the hanging valley, where an old hut foundation makes for a good stopping place. Here we are just before breaking the fellowship, with our objective right over our heads: 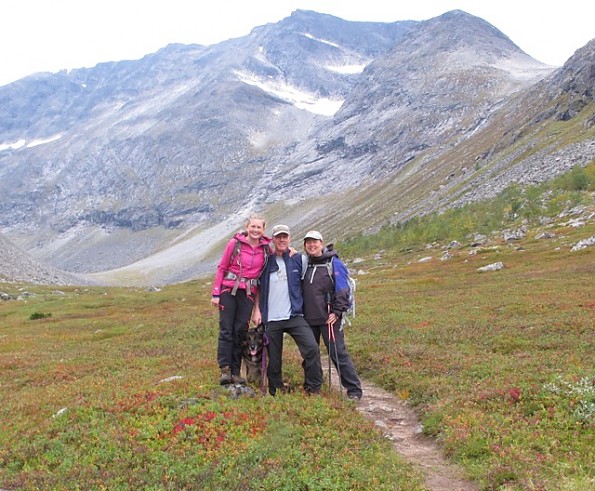 Continuing up the valley, we got a chance to size up the crux, a headwall that would take us up the next step. 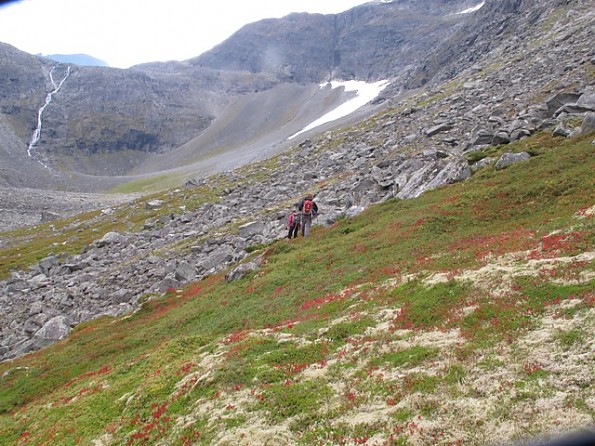 Last time I was up there it was mostly snow -- I remembered there was a couple of 10-20 meters bolted to the rock up there somewhere to help get over the last bit, but couldn't remember where they were. We sized up a line to the left of the waterfall and were able to pick our way up without taking any big chances, and then located the cables down over the rocks to the talus on the right before continuing. Here's Hans starting up our new route: 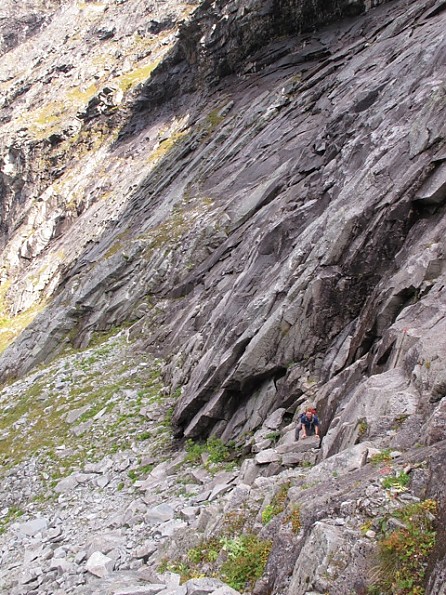 And looking back down the valley: 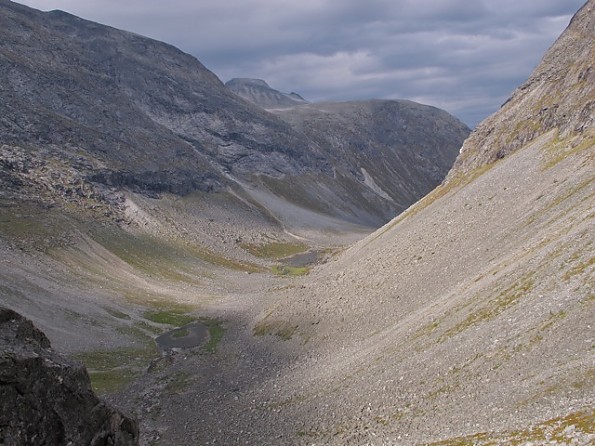 Any semblance of a marked route ends at the top of the cables. Next up was 500+ meters up a steep, loose slope of frost-shattered rock to gain the summit plateau. This was the toughest part going both up and especially down. 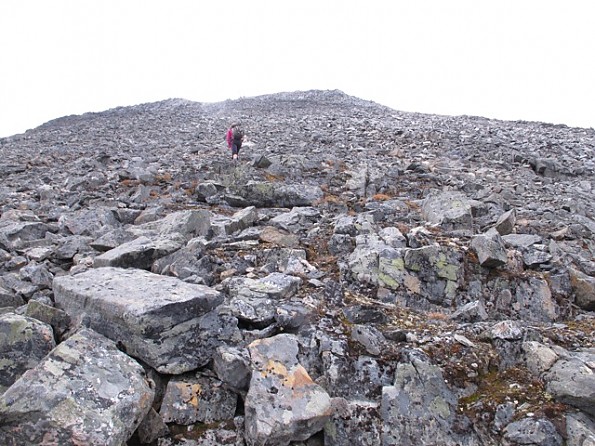 Then an easy amble over more crushed rock, keeping the big drop on the right, to get to the summit. 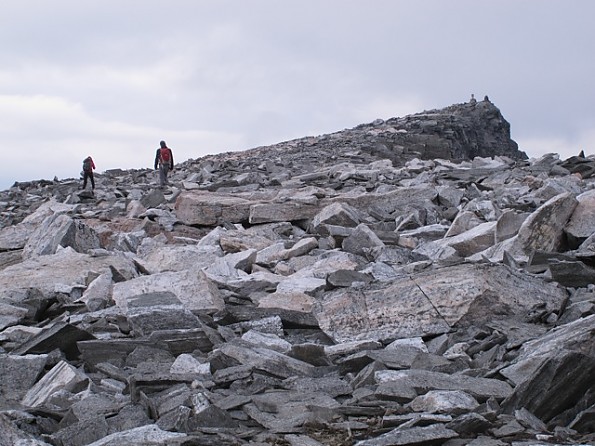 Here's the father-daughter team on top. 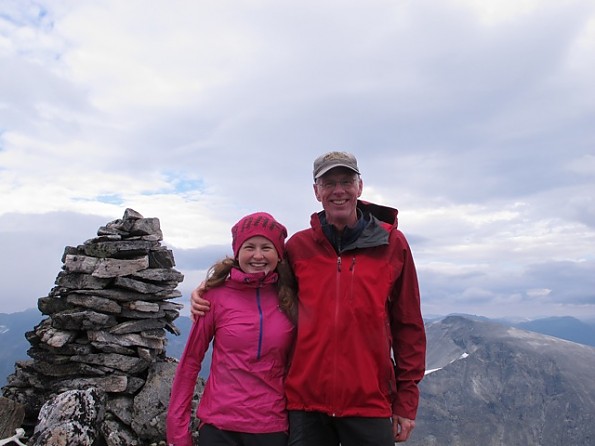 The weather wasn't as nice a promised, overcast and a bit hazy, but there were some breaks of sun to brighten things up a bit, here on the neighboring peak Kaldfønna. 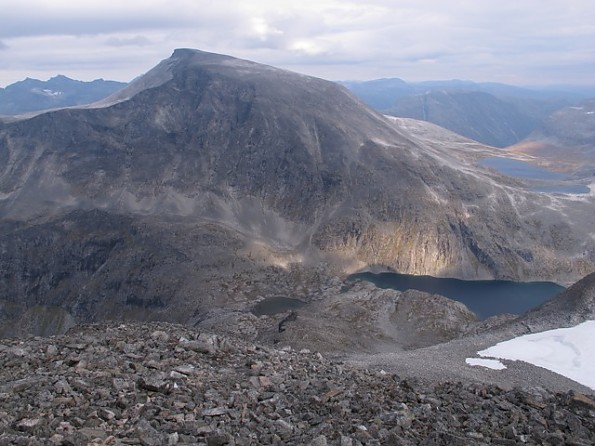 The descent was of course a total knee-buster; this one would definitely be easier in snow, even without skis. It took us probably and hour and a half to get back to the cables 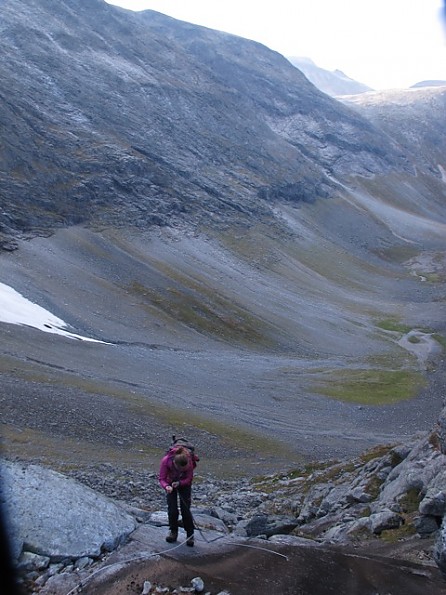 and we still had a ways to go. All told about 10 hours, without a whole lot of down time. After we got down and rendezvoused with our "support crew", we all drove on up Sunndalen for a late supper at Bårdsgarden, a drive-up self-service hut that occupies half of a big old farmhouse, with the farm family still living in the other half. We've spent many a weekend there -- like other huts in the region it has bunkrooms where dogs are allowed in so there's even a place for Ralphie.

On Sunday we had a leisurely waffle breakfast to get the weariness out of our legs and put in another 900 meters to get up to Snydda, a 1500 meter peak that feels like it hangs out over Gjevilvatnet like the prow of the Titanic. Here's the view from the top down over the lake and across to the two big cirques on Gjevilvasskammen. 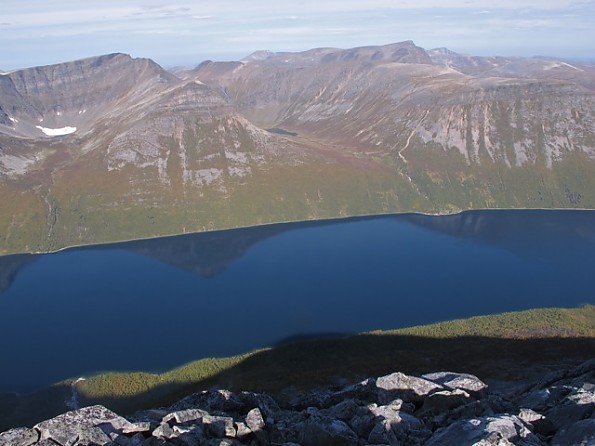 This was the first weekend of September, but autumn was already underway, with the bearberry going scarlet: 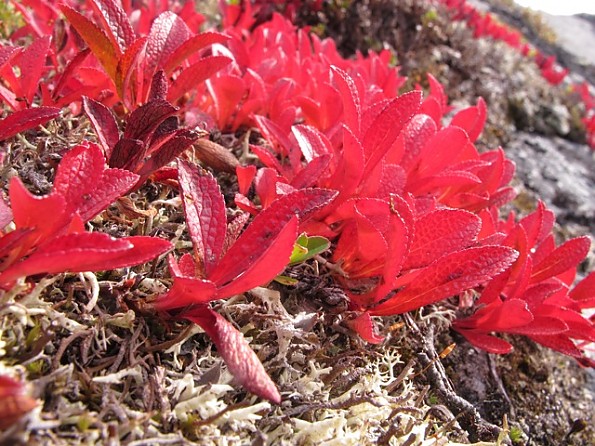 and the birch going yellow: 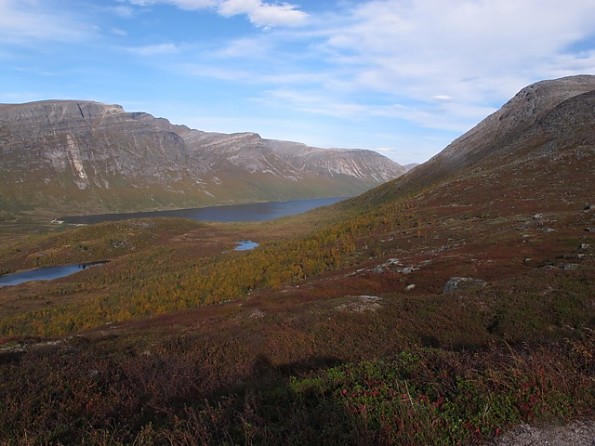 Now as we go through equinox our days are getting shorter fast and we'll soon be in cold long nights and short days that are just about as cold, and we'll be waiting for snow. But we'll try to get in one or two more weekenders before the days get too short.

sweet TR.  I love the tower. What a cool scramble!

I love the depth of this picture: