A little help? What would you have done?

During one of our trips this summer, we came upon the following charming scene.  It was an idyllic place:  the sun was sparkling, the meadows were lush and green, and the surrounding mountains seemed as if they were waiting for Julie Andrews to start singing.  "The hills are alive...." 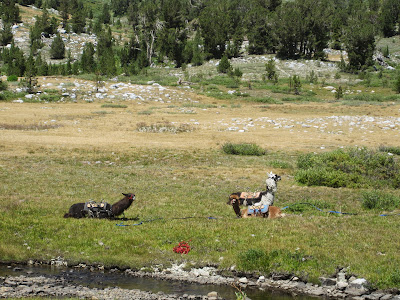 And there, in the middle of the meadow, were a couple of pack llamas taking a bit of the breather.   Nearby, a young family was taking a bit of a breather as well.  The kids, aged from about 4-10, were having a snack in the shade, and mom was pulling a few more tasting morsels out of a pack for them.  They looked hot, tired, and reasonably happy.

But as we approached them, the father of the family came out to greet us as we descended down from our cross-country adventure to Return and Soldier Lakes.

"Is that the trail to Virginia Pass?" he asked, a not of worry in his voice.

We assured him that it was not.  It wasn't really a trail at all, although it led to some beautiful country.  It sure wasn't on the way to anywhere else at all.

"Can you tell me where the trail to Virginia Pass is?" he asked, a little desperately. 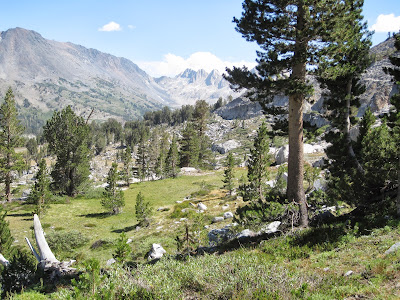 We remembered passing a large cairn on the trail below where his family was resting and mentioned it to him.  The cairn also had a huge arrow next to it to point the way.

"Yeah, it's not very easy to follow." he said.  "I guess it might get better as you get higher up."

We would like to have helped, but our route was in another direction, and he didn't seem to want to hike with us down to the cairn...so we offered him encouragement that we were sure that was the trail.

And then we hiked off and left him in the middle of the idyllic meadow, with his llamas and his little kids.  We hoped that he would find his way up to Virginia Pass.  And we made a note to tell the Rangers in Bridgeport where we had been hiking, and to check the backpacking websites when we got back, to see if a family was reported missing.

All has been quiet, and we are happy that it must have turned out well.  Still...it was awkward to just leave them there.  Maybe we should have hiked the route past the cairn with them, until we were sure that they could find the trail.

But then...it wasn't on our way at all.  And the kids had food and water. And the trail to Virginia Pass could really only lead one direction---up over the ridge and down to the trailhead.

One question comes to mind: Could they have safely found their way back out by themselves if they decided to abort the trip?

If so, I'd say let them wander around all they want. If they can't find the route through the pass, all they have to do is turn around and go home. And you have a good point about the water - that meant they were in no immediate danger.

I've offered advice to people who look like they're lost only to be rebuffed pretty rudely. All you can really do is ask if they want help, and if so, you can offer whatever assistance might be needed .

They were on a loop trip...and yes, they could have hiked back the way they had come.  BUt it would have been a lot longer.  Viriginia Pass was the shortest way out to their car.

Only if he had asked for help and you ignored it, would I view this as an ethical dilemma. If he was greatly concerned, he would have followed you back to the cairn. Instead, he listened to your information and made a choice to continue on--taking responsibility for his own actions.

Notifying the park's rangers was a very good idea. Had there been a problem, they would have had a precise location to start working from.

It didn't sound like they were in any danger...yet.  I'd leave them to their adventure. If they got desperate I hear that llama is a fine meal.  Just cut open their belly with your light saber and crawl inside.  Or is that a different animal?

If I had a dollar for every punter huffing up the trail asking, "How much farther is it?"  I always tell them they're about half way and inwardly giggle at their despair as they hear my reply.

But that's just me and I'm kinda mean that way.

Peter, that is an interesting mention of rude responses. I guess I’ve been on both sides of that. A guy passed me the other day while I was looking at my map, assumed I was lost, and asked if I needed help. I was in a funny mood and responded “why would you ask, after all.... I’m the one with the map”. He didn’t get it and seemed irritated with me.

I have escorted people to trail junctions before (when they seemed really frightened) but never had to fully abandon a trip for it.

It is always funny to get that “how much farther is it?” question. I hike a lot in the Smokies which has 900 miles of connected trails. How can you know where “it” is?

I think you responded well. The issue is, he asked for advice, which you gave him. He did not ask for more help. I am always reluctant to offer advice or assistance unless it is asked for. As a WFR, I cannot work on someone if they refuse my offer.

On the Yukon a few weeks ago, we came upon a German who was walking the shore, several hundred meters from his boat. It was a nasty day with the wind cooking and the rain coming down in sheets. We pulled over to him and said hello and asked how his trip was going. He asked where Erickson's was(an old wood yard). I told him it was another half mile down river and we went on our way. He did not ask our assistance except for directions, though I did glance at his boat as we passed to make sure it was well tied up.

It is always funny to get that “how much farther is it?” question.

I occasionally hike with someone who just loves to tell people 'Just five more minutes'. The problem is that she has no idea how fast anyone else is, and while a some people might be encouraged, others get quite offended. I think the reason is that she's presuming to give them information they didn't ask for and often don't need or want.

Topic: A little help? What would you have done?