So we were looking for a place to avoid the crowds on the big July 4th weekend, and boy, did we find it!

We headed out to Clarks Fork, off Highway 108 in the Carson-Iceberg Wilderness, and started up the Disaster Creek trail.  Not a disaster at all….but pretty darn steep as it climbs about 1,000 feet in the first mile.  The next two miles are a little better, which gets you to the junction of the Paradise Valley trail. 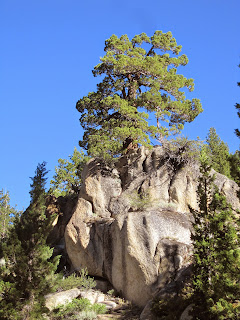 (We passed a well-marked use trail heading south to the PCT here….more on that later)

If Disaster Creek wasn’t a disaster, Paradise Valley wasn’t a valley.  Another steep climb took us up past charming cascades, and then to a final push that took us up to the PCT.  The whole climb is about 2700 feet over six miles, but most of that is concentrated in a few steeper sections.

From here we went straight across the PCT to descend into Golden Canyon.  While this trail has a bit vague in places, there was only one direction it could go---straight down along Golden Creek.  We ended that day after about 8 miles alongside the creek, where we would try out the new tent I made.See photo below. 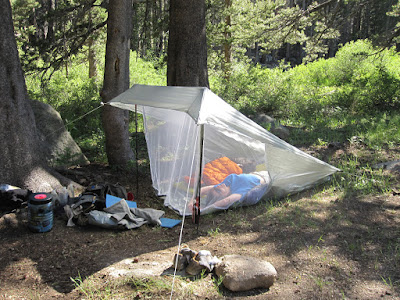 This is remote country.  We saw no human footprints, but lots of bear scat.  And M saw the bear at the foot of one of the waterfalls we passed.  The whole area is closed to fishing, so it lacked the use trails, trash, and human impact of most other areas in the Sierra.  Lovely.

At the foot of Golden Canyon we searched for the use trail up the Carson River through White Canyon….but we came up empty.  There may be a trail there, but according to someone we spoke to later, it hasn’t been maintained in forty years or so.  We chose to keep heading down the Carson River to see if we had misunderstood the map….but nope. Someday we’ll go back and see what we missed.

At Carson Falls we ran into the only other couple we saw in two full days of hiking.  They had hiked in from Ebbetts Pass, and seen nobody else until they met us.  A quiet but friendly little chat followed.

After lunch along the Carson River, we climbed up the very steep trail along Murray Creek. This gave us some nice views over the Carson River, and eventually took us to our second camp, at the headwaters of Murray Creek. With lots of bugs (biting flies, not mosquitoes, and they were vicious!) we camped out along a ridge above the canyon with great views, and strong gusts of wind from time to time.   The new tent did fine.

The third day took us up to the t 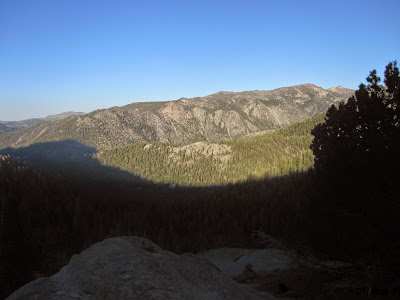 op of the ridge between Murray and Wolf Creeks, and then up to the PCT.  Beautiful, open scenery here, and this was the very best part of the whole trip.  Once along the PCT we ran into the crowds---five people in two miles—and then hopped back over to the trail down Paradise Valley to complete the loop. In the view below, M is working her way through a meadow below the PCT where the trail had disappeared entirely.  (No surprise, since the grass grow over any hint of the trail that was left.) But it you look carefully, you can see a deer that was tracking her all the way across the meadow.  That's what she's looking at.  It helps to zoom in on the photo. 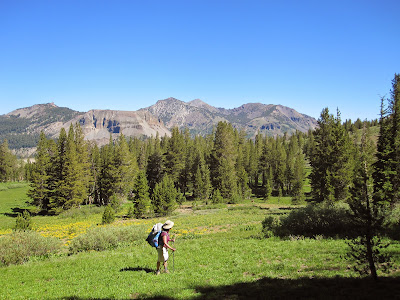 This trip doesn’t have the kind of huge vistas that you find in the high country of Yosemite or SEKI, but it does offer real isolation in a very different kind of Sierra.

Pretty country and any time you can get away from the people it makes a place even prettier.

That is a neat looking tent you made. Silnylon? Do you rig a tarp over the top in weather?

I've day hiked and camped around Carson Pass and Sonora Pass, but never backpacked in between.  As you said, it looks like a great place to see some nice scenery, albeit without the dramatic vistas of the high sierra, but without crowds.

Nice to find a quiet place over a busy holiday weekend.  Thanks for sharing your trip!