We arrived in Yosemite on Sunday evening and were amazed to find campsites available at Porcupine Flat.  In fact, the campground was more than half empty all night…and they had spaces at the Tuolumne Meadows campground as well.  We grabbed some breakfast for the next morning at the store, and picked up bite for dinner at the grill and took it back to the campground and spent a quiet but cold night there.  Down in the little Porcupine Creek valley, the cold air sinks down and the temperature was in the low 30’s…

Day one:  After leaving the rest of our food and smelly goods in a bear box at the Cathedral Lake trailhead, we parked just up the road from Pothole Dome and took the use trail for an easy hike to Glen Aulin.  We were delighted to see three coyotes on patrol working their way down the river on the far shore…and charmed to meet the Glen Aulin camp manager on her hike back to work, after she’d watch the Warrior’s win game five. 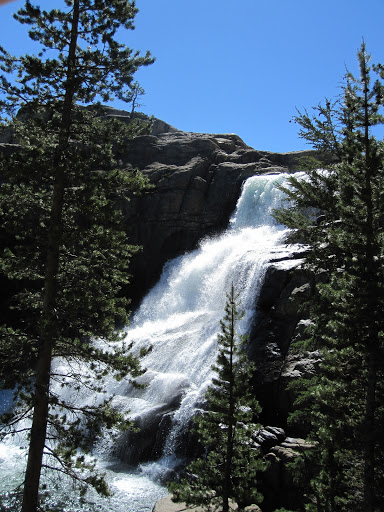 Glen Aulin wasn’t open for business yet (it was supposed to open the coming Frida) but there were still some campers in the backpackers campground.  We had a nice chat with two older ladies who had set up their tent there and were dayhiking out of Glen Aulin.  Really nice people.

We wanted to make sure that we got started up the right canyon from Glen Aulin (not Cold Canyon or Alkali Canyon) so we stayed on the right side of the creek this afternoon.  It wasn’t bad going, but as we were off trail, we had to continually choose our route through the trees, rocks, and occasional deadfalls.  We found the best route usually was from fifty to 150 feet from the creek….but we ranged from right along the shore to well up on the hillside. 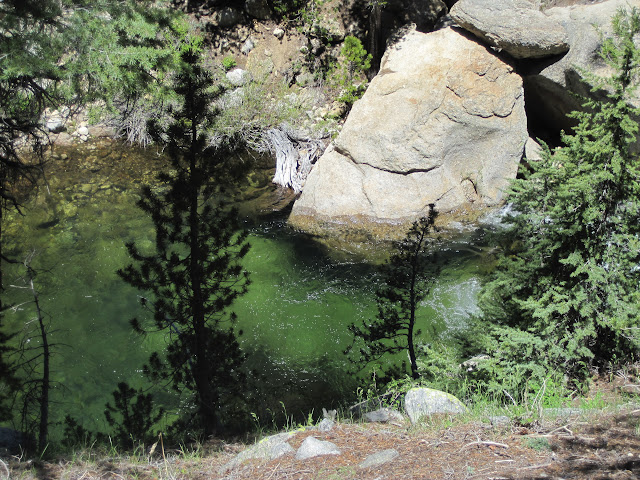 The one bit of navigation that was complicated was that the first big ridge to the north of the creek shows trees on the topo map, but it was clearly a bald granite dome.  It was only after we saw the second granite ridge that we were sure of our exact progress. 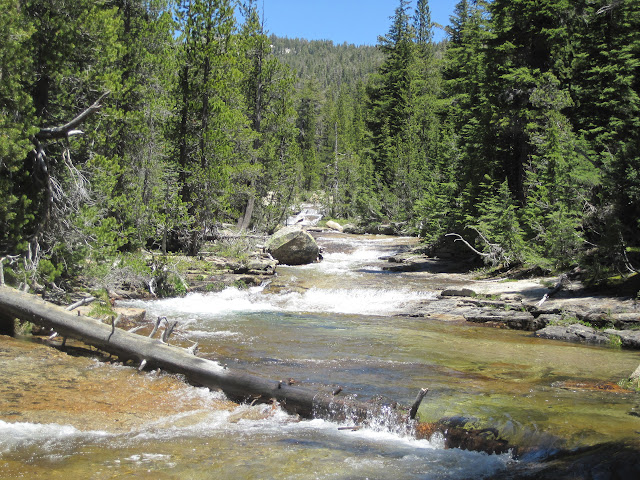 After a couple of hours of bushwhacking along the creek, we called it a day.  Found a nice campsite perched over the creek, and enjoyed rinsing most of the crud from the trail off our feet.  P caught quite a few trout in the small pools here.  Mostly brookies, but a few rainbows.  Nothing over 8 inches, although we did see a few larger trout on the hike.  They were well protected, down in a gorge and hanging out behind a huge rock.  There was no way to cast to them!

That night it was pleasant to see that the skeeters weren’t too bad.  But down in the canyon, the temperature was around 35, and we slept closed up tightly in our bags. 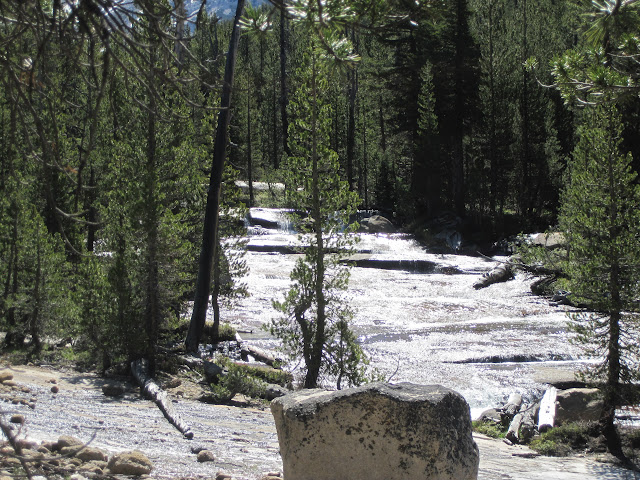 Day two.  We had a lazy start today, and then kept up the creek, staying on the righthand side and trying to sight landmarks.  We made it up well past the second ridge on the north, and decided to cross the creek for two reasons.  One is that the terrain looked easier over there.  The other one was that our next landmark was a smaller tributary creek coming in from that side….and this way we couldn’t miss it.

The hike this day was really beautiful.  Conness Creek is full of deep pools, cascades and slabs of granite covered by rushing water.  We found the smaller stream with no trouble, and followed it up to the left.  This was a bit steeper, but really very easy going, with lots of open space between trees and rocks.  It was easy to find the notch we needed to get up on the plateau west of Roosevelt Lake, and we hiked straight up the little valley there.  As it opened up, the views became spectacular, with Mt. Hoffman, Half Dome, Cathedral Peal all; visible. 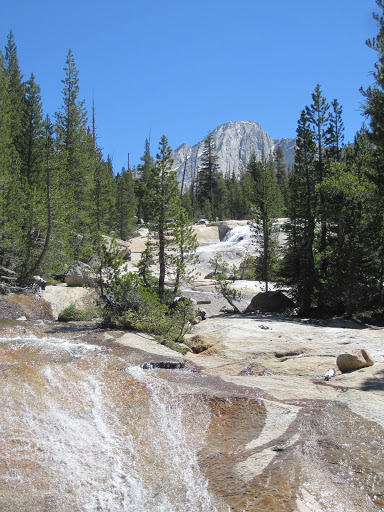 We made a small miscalculation and climbed out of this little valley a bit too soon.  It gave us great views, but made the approach to Roosevelt Lake more complicated.  This was about a mile of big open pink granite…and we finally called a halt and ate lunch up there. 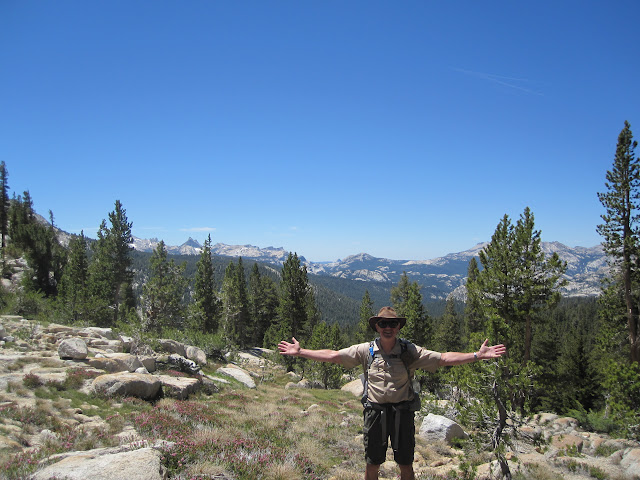 When you approach Roosevelt from this side, there are two good options: either follow that little valley all the way to the top, and then descend down to a point well past the middle of the lake; or head down right away to the outlet.  We did neither.  We tried to aim at the island in the lake, and found ourselves repeatedly cliffed out.  It took us about 30 minutes longer than it should have to get down to the lake this way.  Be warned. 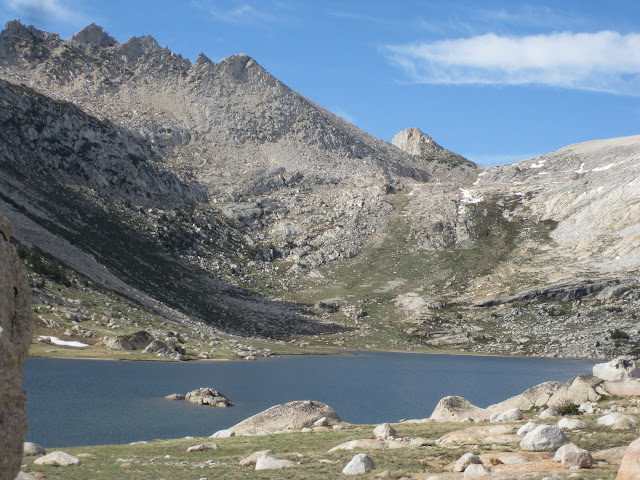 Campsites at Roosevelt Lake are problematic.  There are no trees, so don't bring a hammock.  The West side was green and lush, with a few big rock formations to serve as windbreaks (it was really breezy) but it was also absolutely mosquito ridden.  We dropped our packs and started to wander around.  After a while, we decided to see what life was like on the other side of the outlet stream.  The East side was drier, a bit breezier, and with fewer bugs.  Guess where we camped? 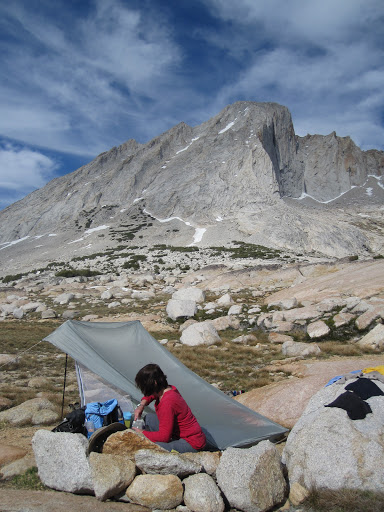 We met three dayhikers who had hiked over from Young Lakes here, and shared a few stories.

The real attraction of this lake is the views (especially as there are no longer any fish in the lake---and there appears to be a net across it right at the island…).  You can see Conness as a staggering tower overhead, with Sheep Peak on one side, the south ridge of Conness to the southeast, and Ragged Peak and it’s cirque to the south.  We rinsed off in the outlet stream, noting that there was a snowback still there, melting in the shallows, to give the water just the right amount of chill.  And after a dinner eaten in headnets for the bugs, we wandered around, took a few photos of the sunset, and called it a night. It was a great show at sunset...and because we were on the East side of the lake, we had light (and warmth) longer at the end of the day. After a day and a half of cross-country hiking, we were ready for rest. 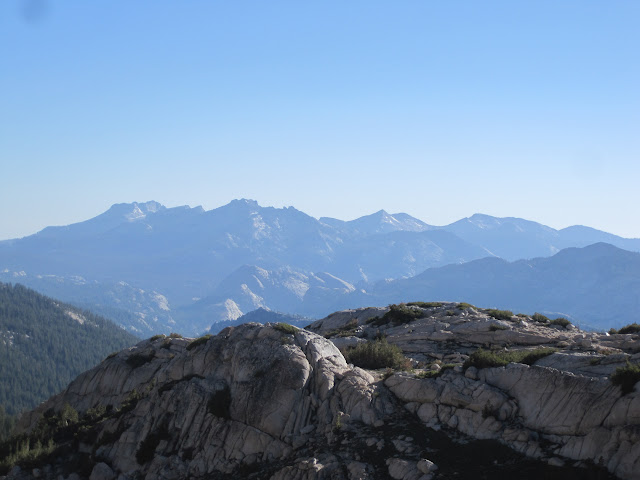 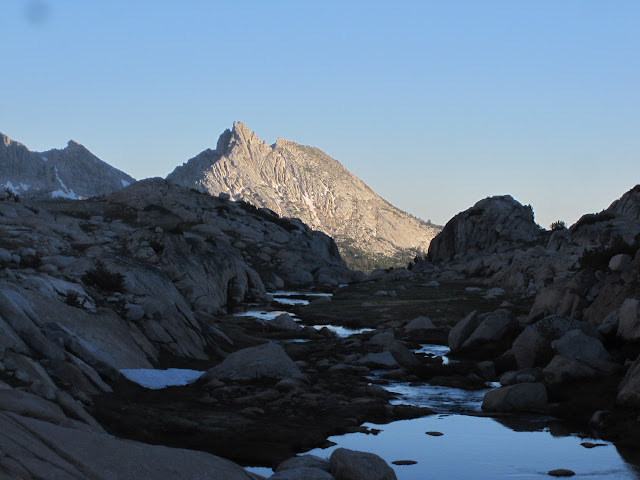 And then in the middle of the night, a group of three or four coyotes exploded into a howling concert.  At 1:30 a.m., it sounded as if they were right outside the tent, but we suspect they were on the other side of the outlet stream.  Really wonderful. 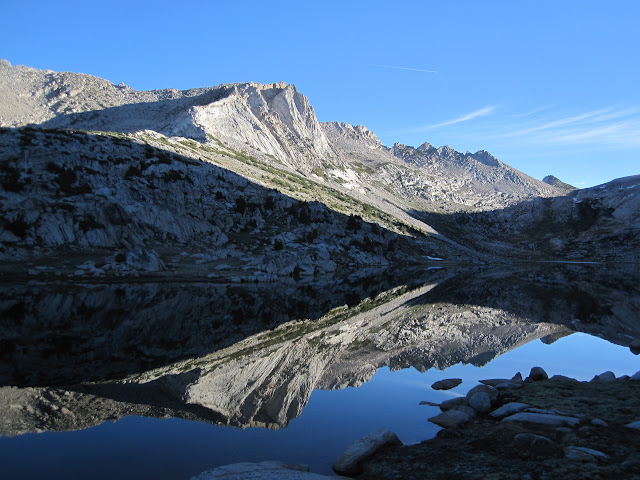 There is very little wildlife at Roosevelt Lake.  As noted, there are no fish. There are plenty of marmots and Belding squirrels, pikas, one or two birds, and two lonely seagulls.  Since there are few trees, it’s not surprising the birds were headed elsewhere. 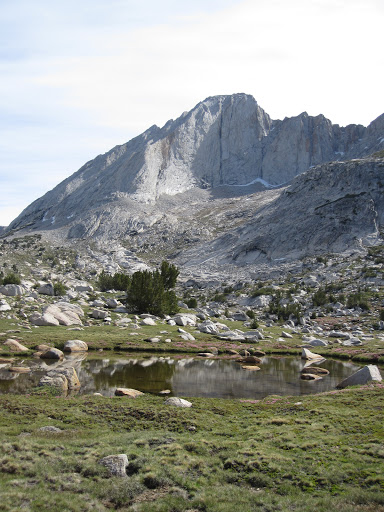 It was cold again that night, with the condensation on the tent turned to ice by morning.  So that added a few minutes to our prep time. But the stars were stunning, the Milky Way popped out of the sky and the dark channels were amazing. 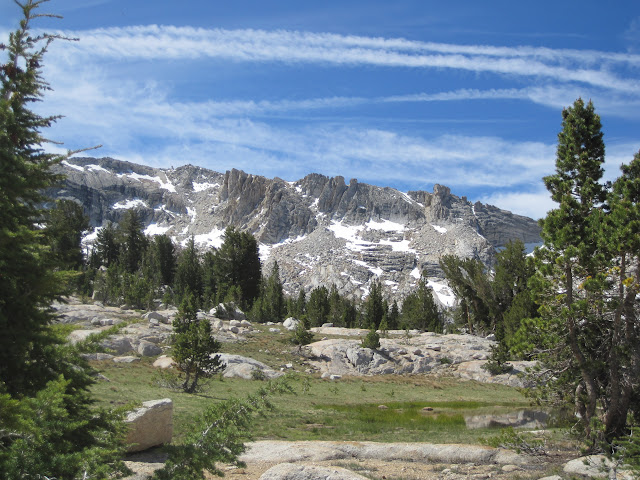 Day Three:  Roosevelt Lake to Young Lakes.  This was a piece of cake.  The next morning we had an easy hike down over the edge of Conness Canyon.  I took reciprocal hearings on both the ridge ahead and Sheeps Peak, so that we could stay on track.  But it wasn’t hard.  Heading down, we kept the notch in the ridge east of Ragged Peak dead ahead.  Once across the creek, we couldn't see anything ahead, but kept a point of Sheep Peak at 330 behind us.  And we hit the Upper Lake dead center. 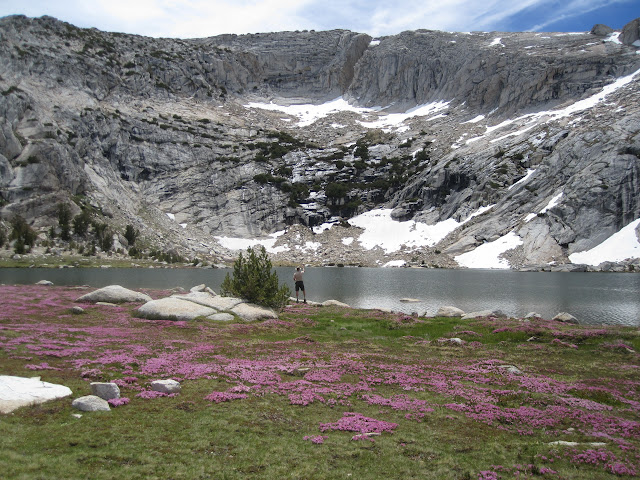 What a beautiful spot.  Glorious lake, surrounded by a well-tended lawn and clouds of pink flowers.  And pestilential mosquitoes.  There is a reason nobody was camped there.  They were the worst on the trip by far, and rated as bad as mosquitoes can be.  We could not help but breathe some of them in they were so thick.  The headnets went on, and after a quick and early lunch, P tried fishing for 45 minutes, and then we ran for our lives. It would not be this bad at the other lakes. 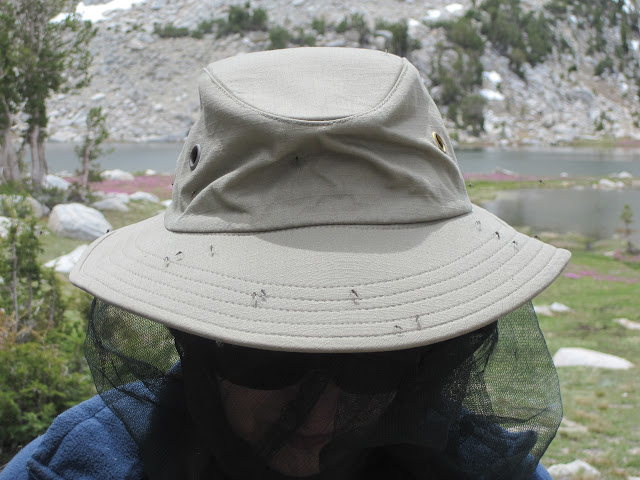 The use trail to Middle Young Lake was really steep, rough, muddy, slippery...and M refused to take it.  So we took a saner route along the ridge just to the North.  East peasy, and it dropped us right into the lake shore just a few yards past where the use trail comes off the cliff. Middle Young Lake was grassy, woth some nice views, no people, and the bugs weren't quite so bad...they were only horrible.  We kept going. 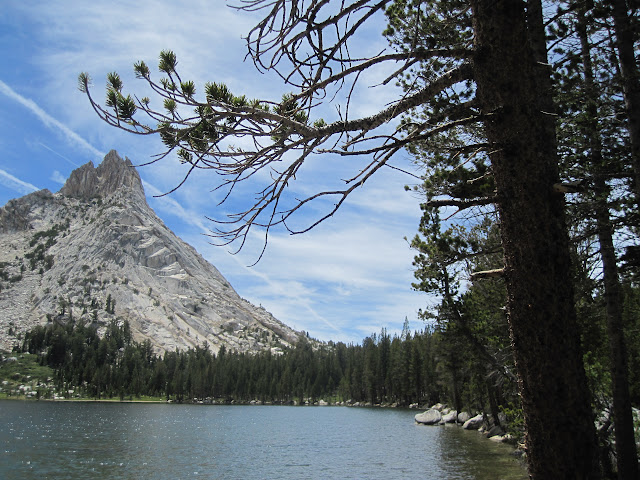 Although it may sound like Goldilocks, Lower Young Lake was the best of all.  We set up camp on the sandy ridge to the northwest of the lake, nestling our small grey tent in among a cluster of small trees.  That was a mistake.  Nobody saw us there, and by nightfall we had found other groups camping near us, including two who were within 75 feet.  The rest of the lake was empty, except for one group of young men on the far side.  Crazy. 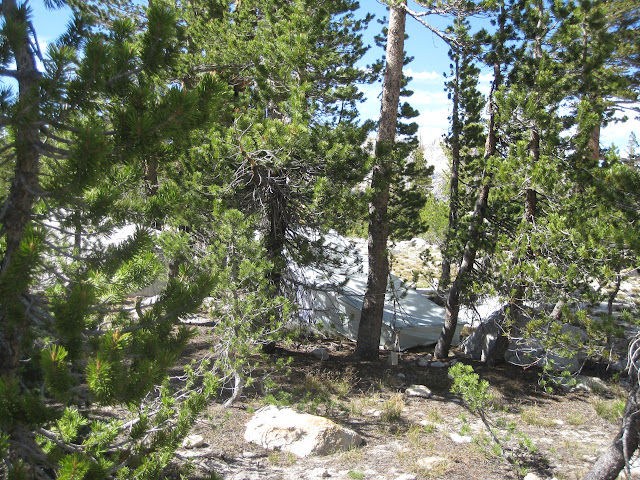 There was also more trash than we’d like to see here.  We counted three half-eaten apples slowly desiccating in the sun, a fishing float, lots of micro-trash, some used TP in the rocks, and somebody left behind an entire rain fly on a rock.  We asked everyone about it…then toted it back to the visitor center in Tuolumne Meadows. 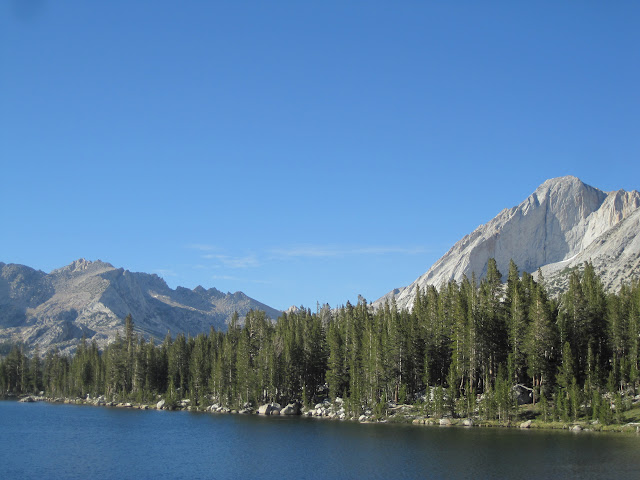 There skeeters were really better here.  Sure, we put on our headnets at times, but only when we were stationary for a while.  P fished for 90 minutes and caught at least ten really nice brook trout, all pushing a foot long.  M took the camera and tried to capture some of the beauty. 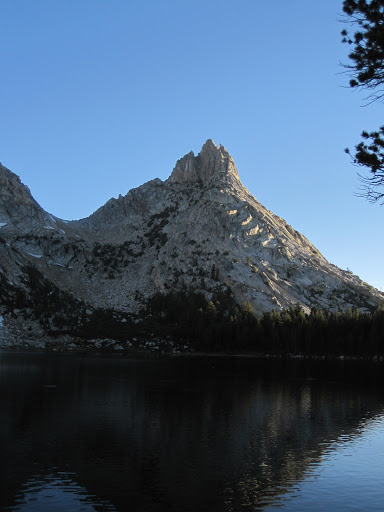 After dinner, we went on a short stroll to see the views, and were stunned to see the surface of the lake literally jumping with fish.  It was like watching popcorn pop.  At one point M counted 75 rings on the surface in just one small section of the lake.  What fun 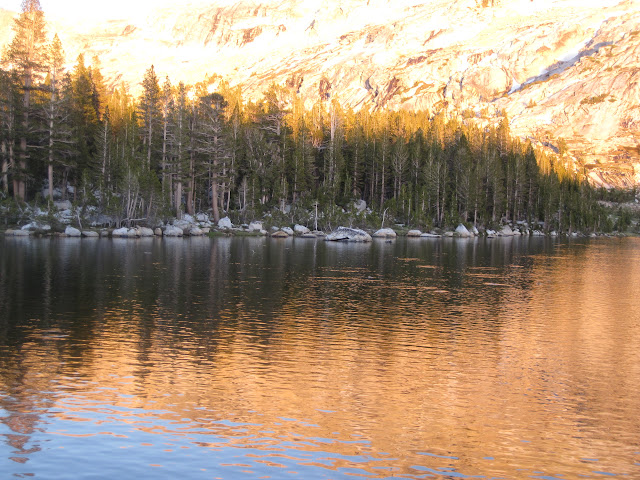 We then climbed into the tent for a night’s sleep.  This had been a pretty easy day, and we now had visions of hamburgers dancing in our heads for tomorrow.  Temps here were warmer by a few degrees, and we think the difference in elevation also affected the mosquitoes, since there were fewer in Conness Canyon and here.  Below 10,000 feet seemed to make a difference. 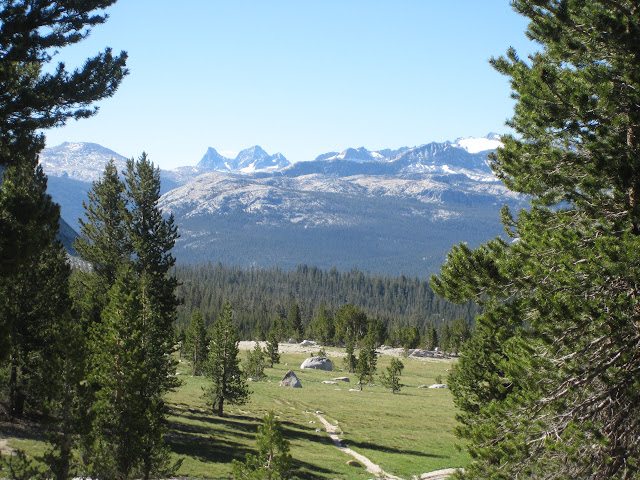 The last day we were out on the trail a bit earlier, leaving everyone else there pretty much asleep. The hike out via Dog Lake is just wonderful, and we love the section across the shoulder of Ragged Peak, where the high peaks of Yosemite are all on parade as you hike across the alpine meadow. 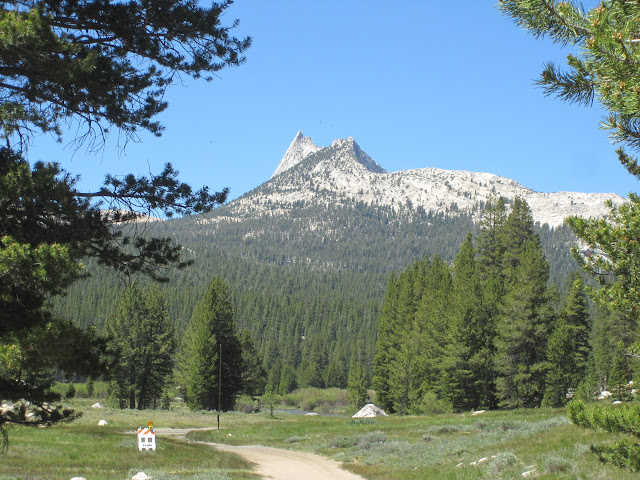 Suddenly we were back in among the crowds, and it made for a different kind of walk for the last couple of miles.  After seeing only three people in two and half days off trail, we were now meeting someone every five minutes.  We ate lunch outside the visitors center at Tuolumne Meadows, and then hiked the quick two miles back to our car. 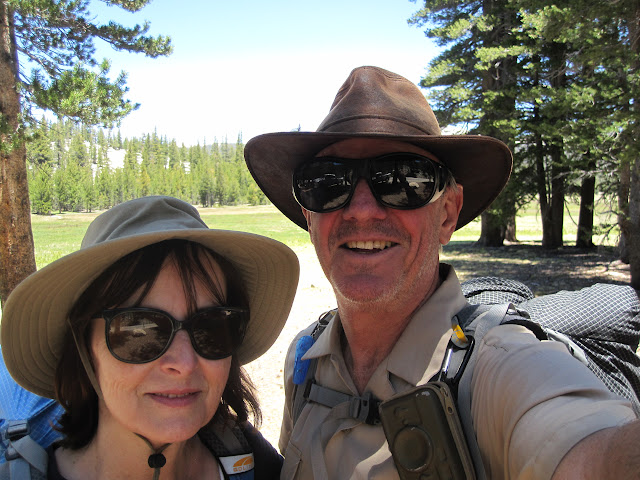 We stopped to take a couple of quick photos in the meadows, climbed into the car, and began to plan our next trip.

Here's the usual Picasa link to the rest of the photos and captions:

Thanks so much for sharing these beautiful pictures, balzaccom! I love seeing pictures from Yosemite!

Awesome report and terrific photos, balzaccom! Thanks so much for taking the time to share!

Good photography. In the crowded places, there is nothing like going cross-country,