Scramble and camp in north Wales

Earlier this week, I made my last UK outdoor trip, an overnighter into Snowdonia National Park, in north Wales.

This trip starts with a photo I took over a year ago from a peak in an adjacent range in Snowdonia national park. That steep lump of rock is Pen yr Ol Wen (3209 feet). The two peaks behind it are Carnedd Dafydd (3425 feet), and Carnedd Llewelyn (3491 feet).

I have to show a photo from a distance, because the hike starts right at the bottom, and all the way up you are just looking at rocks with no real sense of what the mountain actually looks like. 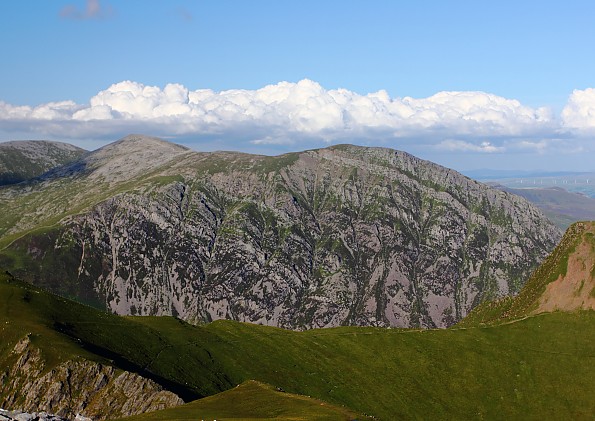 I used the same gear as reported here. The only changes were the backpack (I used a Montane Torque 40 instead as it is more robust and carries load better while scrambling) and shelter (substituted my Siltarp1 with the the Silwing).

The hike is steep, and for the most part there is no real path, and in many areas, there is none at all. Most of the way breaks into scrambles, and there is great opportunity to "choose your own adventure". This made it really fun for me, and was why I have been wanting to do this for a long time. I am glad this was my last UK outing.

Looking down after going 2/3 of the way up. At this point, it is mostly sharp rocks or loose scree. The scree is annoying, but there are many great hand holds to scramble on the rocks. 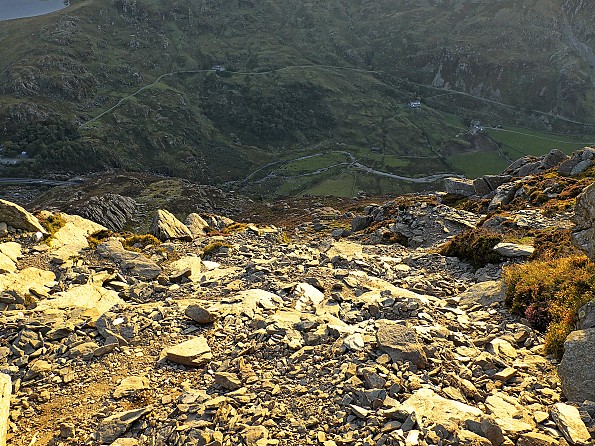 The final 1/3 was definitely the most fun. Great chance for some very fun scrambling. 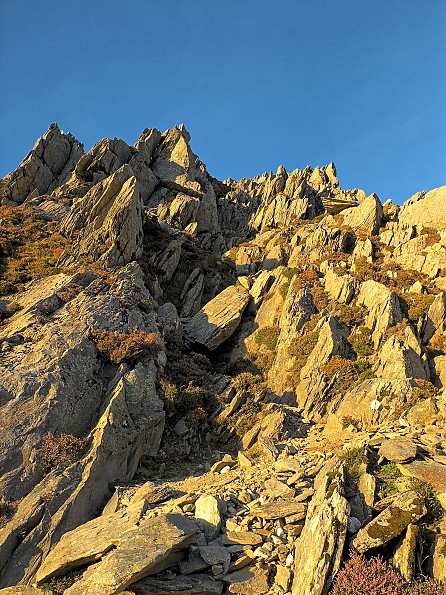 By the time I got to the top, the sun was setting, and I was treated to some wonderful light. (The water you see in the distance is the Irish Sea) 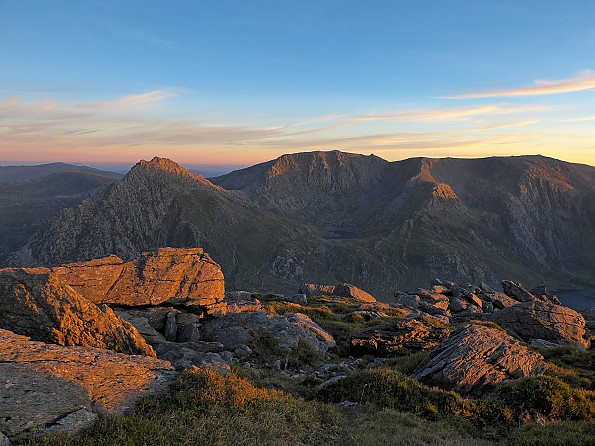 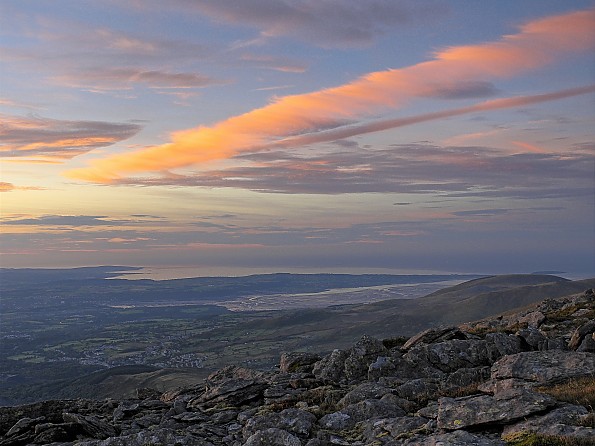 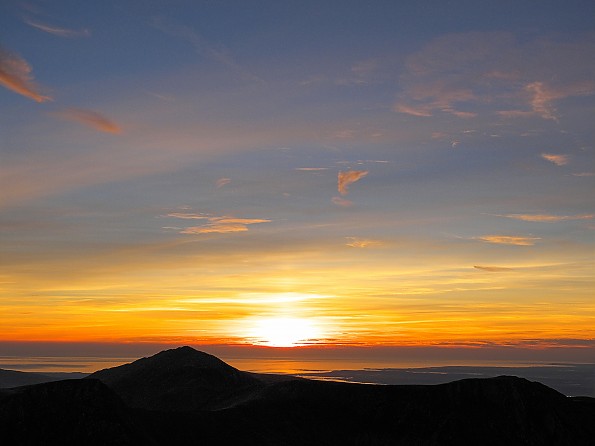 After taking in the beautiful views and having a bit of a rest, it was time to set up camp. I was on a flat plateau, about 100 feet down from the summit cairn (so about 3100 feet). It was very exposed, and the winds were quite strong that night, definitely stronger than forecast.

I was using an Integral Designs Silwing tarp as my shelter. It is a cat cut tarp, and they tend to do well in the wind. Even still, to make it manageable, I had to pitch it very low to the ground, and add extra guy lines. In the end, it was extremely stable and kept me safe while I was battered by wind all night.

I probably only managed about 2 hours sleep, but woke up to a beautifully clear dawn. 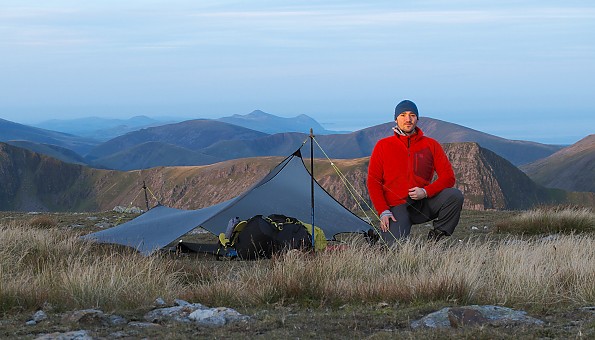 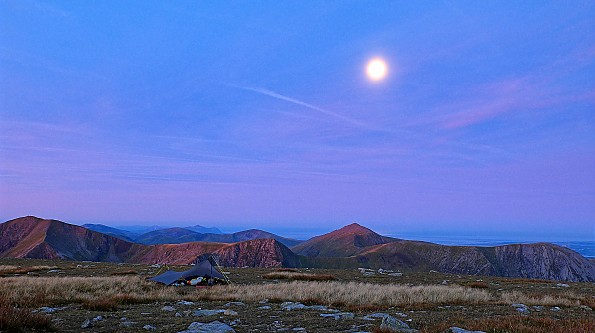 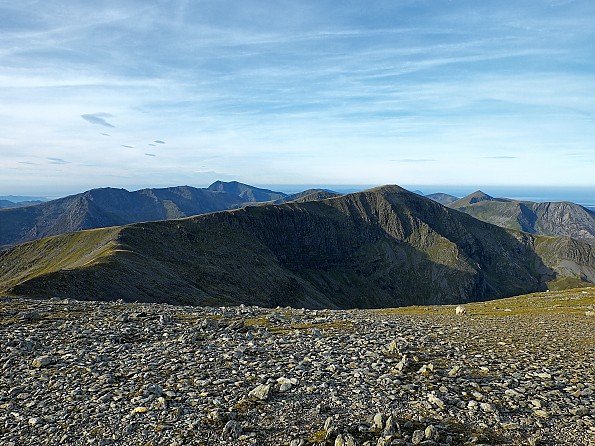 After bagging the peaks, I started my descent into the valley, and back to civilization. On the way I came across some beautiful Welsh ponies, rushing streams, and many little waterfalls. 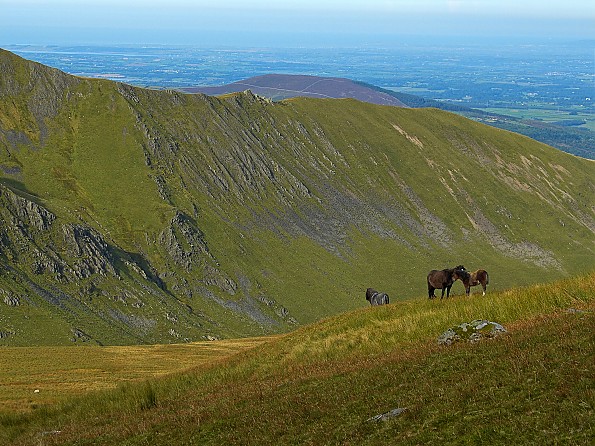 It was a great way to end my outdoor adventures in the UK.

Great photos of a fantastic area. Glad your last trip was so rewarding.

The British Isles have some wild country. Finding shelter from the wind is a serious challenge. I have been in parts of Ireland where there are lots of sheep, and some horses. There are no cars,  only a few  people walking and on bicycles. The old rock buildings are the best windbreak. I like to look for ancient Celtic crosses in the outback.

During the day, I was hiking in 10-15 C weather. At night, especially because of the strong winds on the summit, it dipped to around 4 C. Thankfully (and rarely for Wales), there was no rain!

Nice to read another of your great trip reports but now I am sad to hear this was your last in the UK :( Thanks for giving us such a good perspective into distant lands!

Great photos and trip report, TJ! Thanks for sharing them.

I'm actually a bit sad that you won't be sharing any more trip reports from the UK.

TJ maybe you can focus on finding some rock formations or old stone buildings to use as a wind break. Tarps don't work very well when they are exposed. Then you can get some better rest and stay out a lot longer.

You can always use sheep as a wind break! 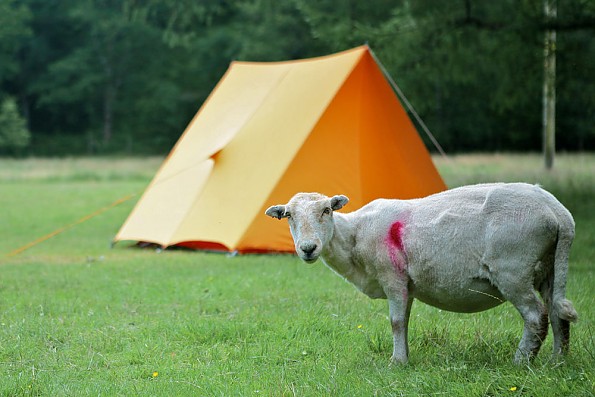 Seriously though, my wife keeps saying she wants to do some hiking in GB -- your pictures about have me convinced that Wales may be the place to start.

Ear plugs are good for when the wind blows.

More Topics
This forum: Older: Photos from a perilous 464 day journey across the frozen Arctic Ocean Newer: This Man is Walking Across Antarctica All By Himself
All forums: Older: Portable hot shower? Newer: Best sub-zero sleeping bag