This past weekend I took a short solo trip onto Looking Glass Rock in Pisgah National Forest just outside of Brevard, NC.  I had spent a considerable amount of time trying to decide where to hike and ended up deciding on this short trip due to it's proximity to home and the fact that I'd never been there.  I had seen the iconic Looking Glass Rock from a distance before but never actually been on it.  Since the hike up is only 3.6 miles I was in no rush Saturday and got to the trailhead around 1pm. It was a beautiful, cloudless day with highs in the low 60's.  The first third or so of the trail was very mild, climbing only moderately through the forest.  The trail crosses a small stream and hugs a creek with a few pretty cascades for the first half mile or so, but there is not much water past this point other than a few seeps.  The next portion of the trail really begins to climb via long switchbacks of which I counted at least 13 or so.  Once through the switchbacks you begin to climb the spine of the ridge.  Roughly a mile or so from the top you pass a large exposed and relatively flat piece of rock which is used as a helipad for rescues as this is a very popular spot for climbers.  Once you are nearing the top of the rock the trail straightens and you can begin to see the valleys that surround both sides of the rock.  There was a great campsite on the left hand side which to my delight and surprise was empty so I decided to set up my tent before even heading out to take in the views from from the face of the rock.  From the campsite, the trail climbs just a bit more to reach the actual summit and then descends slightly before leading out to a clearing the west facing, bare slope of the rock. At this point, it was only about 3:30pm so I had plenty of time to mess around and enjoy my time there.  The trail was pretty busy during the day but I suspected that I passed 80% of the day hikers on my ascent leaving only a half dozen or so people up top once I got there.  I passed the time by collecting fire wood, reading a book, and taking in all of the views from different perspectives.  It was extremely windy with gusts blowing up to 50mph in my best estimate.  As twilight approached I went back out to the rock to watch the sunset below the Pisgah Ridge to our west where I met a couple who also planned to camp for the night.  We chatted about 20 minutes and I invited them to share my campfire a little later which they did. As I came back to my site another solo backpacker approached just in time to watch the last bit of light fade.  I offered to share the campsite since there really weren't any other good spots to pitch a tent.  So instead of complete solitude, I enjoyed the company of these three other hikers as we enjoyed a fire for several hours before calling it a night.  The winds persisted through the night, howling as loud as I've heard before.  I was mindful to pitch my tent under living trees, but I was nervous of widow makers, nonetheless. I slept well and woke to a crisp & clear morning with temps just at or below freezing. I admired the early morning sun casting her light on the surrounding mountains and valleys for a few a short while before breaking camp and making my descent back to the car.  All in all, I think the elevation gain from the trailhead to the summit is roughly 1,500 or so.  I took my time on the way down taking lots of pictures and just admiring the forest.  Early morning is far and away my favorite time to hike.  Although I only spent about 20 hours or so on the rock, I had a great time and will surely return again soon.

This is not my photo but this is Looking Glass Rock.  I camped just on the other side of the summit. 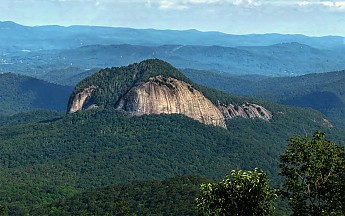 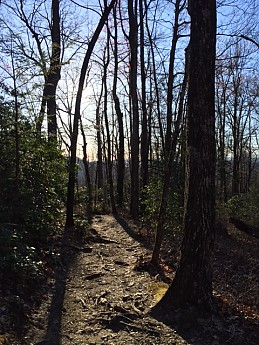 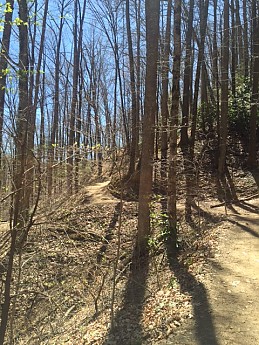 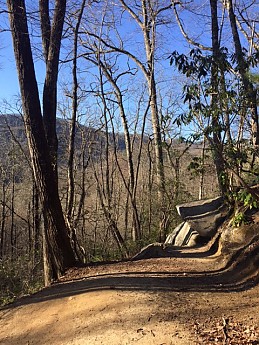 Then come the rocks and tree roots... 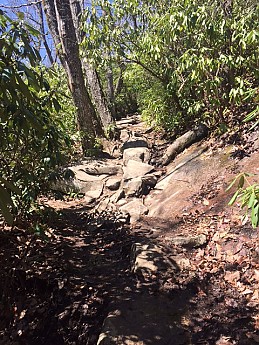 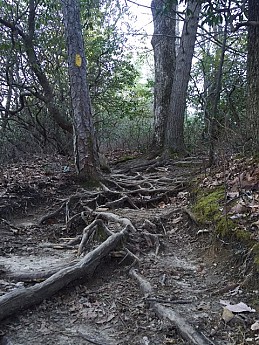 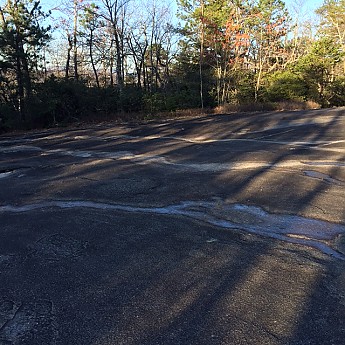 A pano of my campsite

Not a bad spot to relax 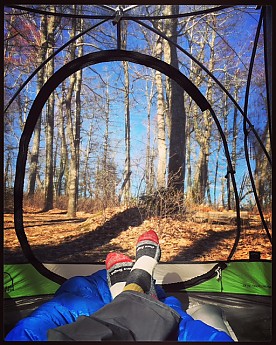 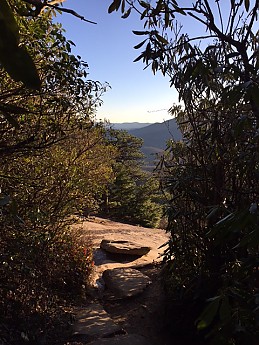 The views weren't too bad 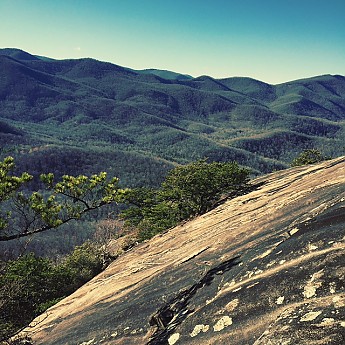 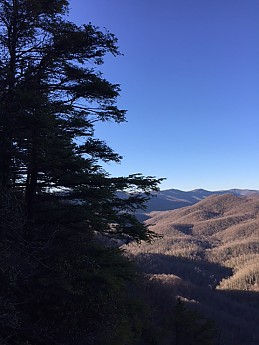 From the photo below you can just make out an exposed rock outcropping off the distance (center).  This is John Rock which I hiked to about 3 weeks ago and experienced the opposite perspective. 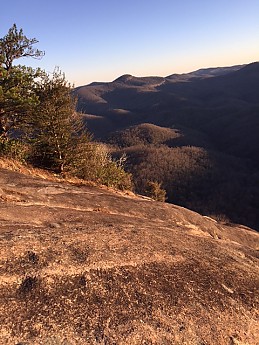 I explored a little on the south slope of the ridge that I camped on and came across this about 50 yards from my tent.  This was a very sheltered little cave and if I was a bear this is where I would hibernate/sleep.  I took a good peak inside but didn't dare shine my headlamp in.  The inside was surprisingly huge. 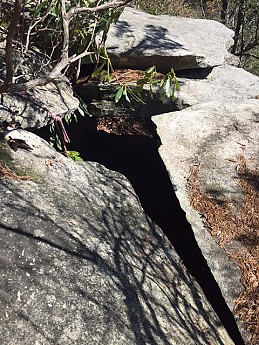 Nothing really exciting here, I just liked how the waning sunlight was illuminating this little seep. 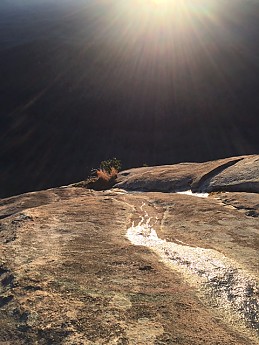 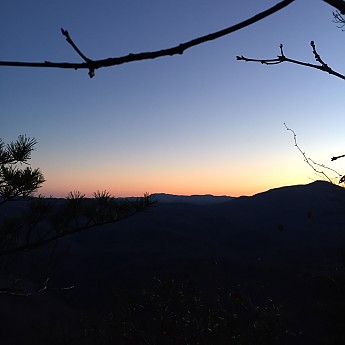 And the rising sun... 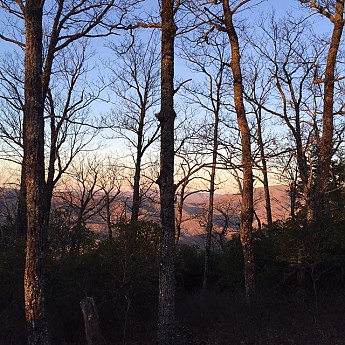 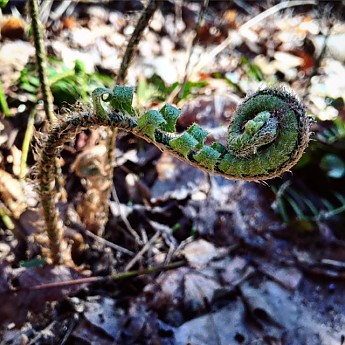 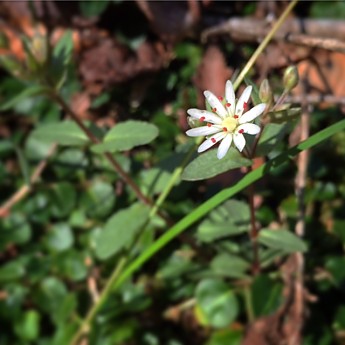 This is a great read! 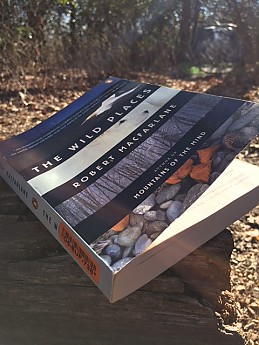 Thanks for looking, y'all!

Great report Jamie, I felt like I was there. thanks

Beautiful and the trails looked so dry for this early in the year. Looks like a great little trip, thanks for sharing!

Nice report...Nice to go some where close at times just cause you can...

Great photos. I need to visit there...it is one of those landmark formations that I love passing by on trips but never stopped. Thanks for the detailed report.

Thanks.. Brought back some memories of a trip there long ago.

Thanks Jamie for taking the time to give us such a clear vision, helped by your great photos! I will need to add this to my bucket list. Surprised it wa so chilly this time of year.

A great time of year in NC.  Thanks for the vistas. They are not always easy to find in the Apps.