What an amazing place to hike. Probably gonna make at least 3 more trips here. I took Amtrak there so I had no car while in the park, 12 nights backcountry and 87 miles hiked out of the 700 miles of trail there. Saw a couple bear, had a 3rd scare the hell out of me one night and took about 600 photos. Had a few very sketchy hikes in thick vegetation solo. Only bearspray, my wits and awareness. Only got rained on at night 3 times. Here's a few shots of the trip. 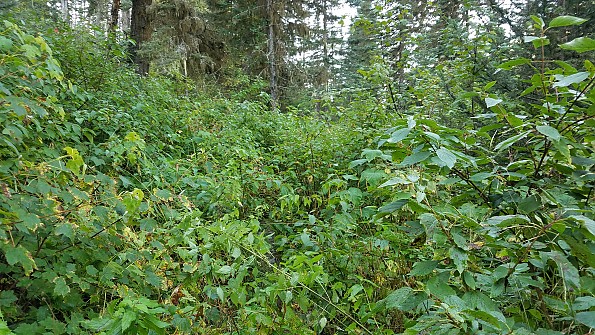 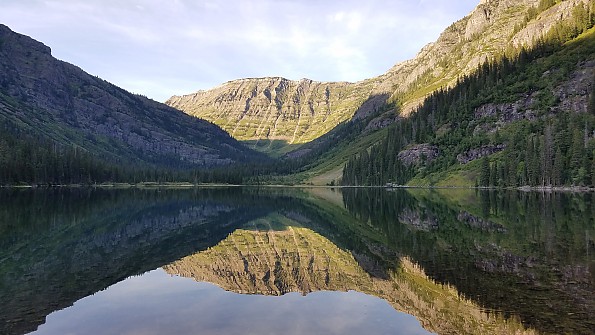 Had this place all to myself. Arrow Lake. Saw a full size solo griz across the lake when I woke up the next morning. 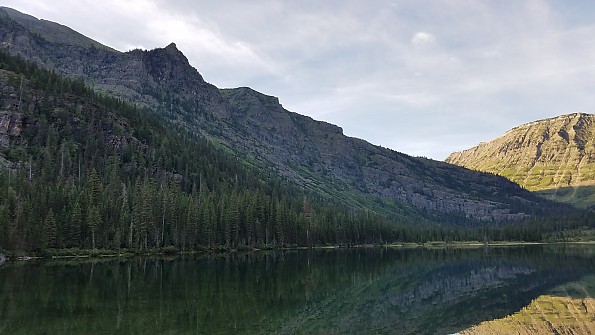 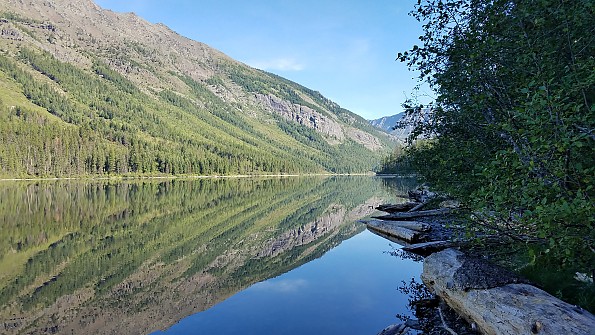 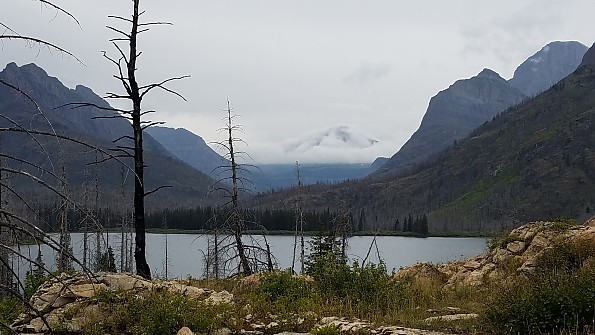 Red Eagle Lake with Mt. Logan in the back draped in clouds. 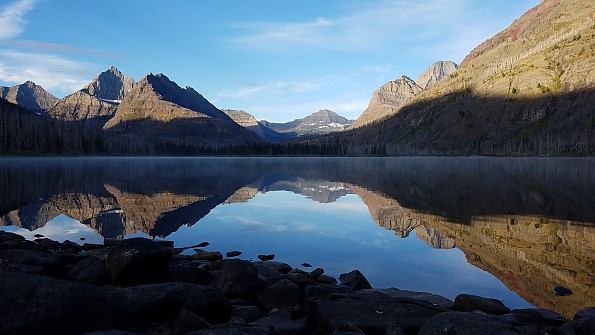 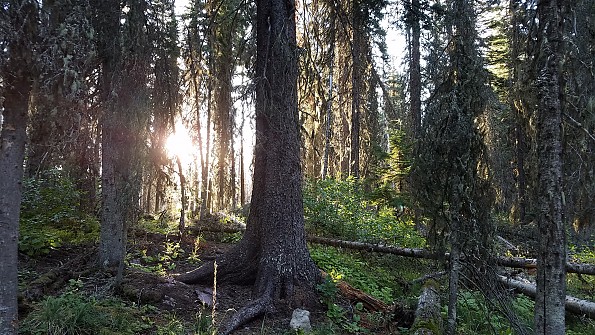 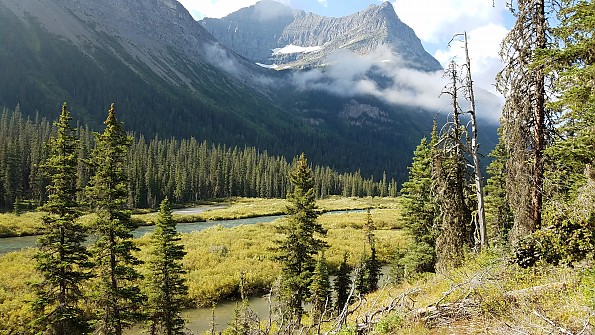 The hike from reynolds to Gunsight lake was probably my favorite of the trip. Just awesome views as you hike through an amazing north country forest.. 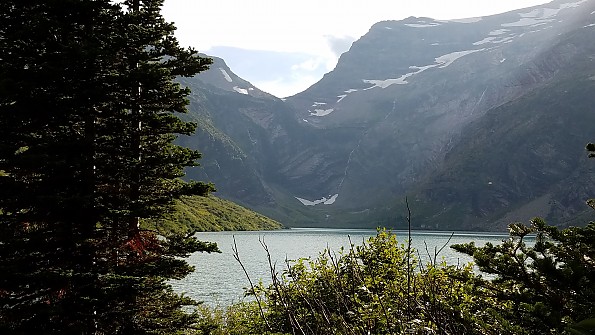 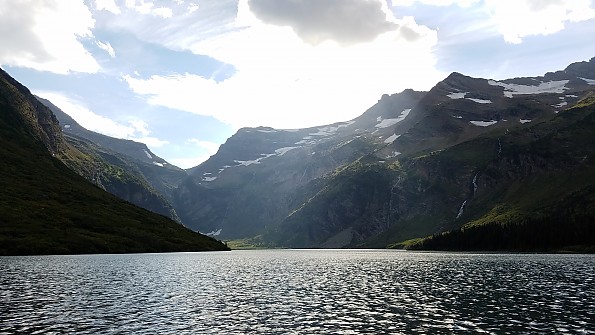 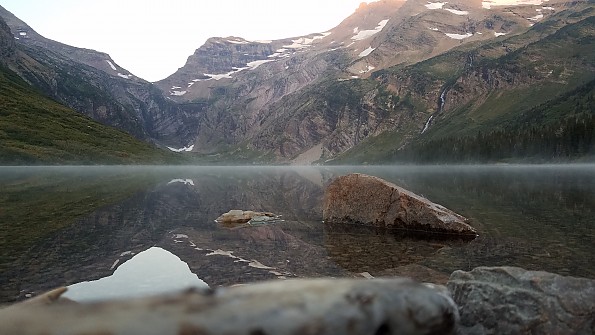 Gunsight Lake. The pictures do it no justice. 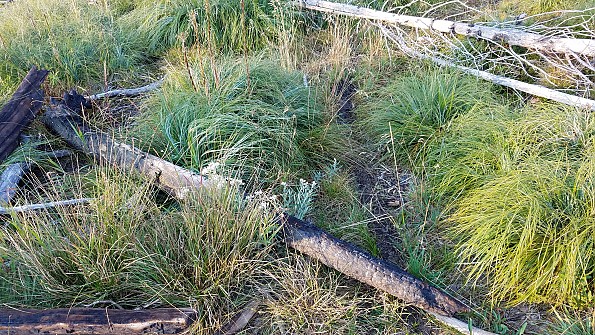 I was awoken at around midnight to a lot of snorting and grunting. I opted to stay quiet with my bearspray at the ready and my knife to cut myself out of the tent. Heard a couple of audible thuds and just stayed calm. Managed to fall back asleep and snapped this photo in the am. You can see where the bear moved logs while rummaging around. This was basically at the head of my tent. 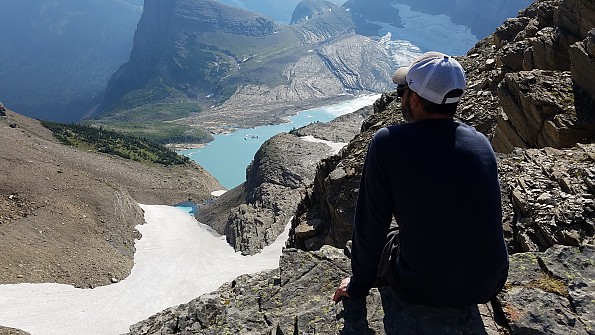 Grinnell Glacier from the highline trail offshoot. Exhausting but worth the hike. 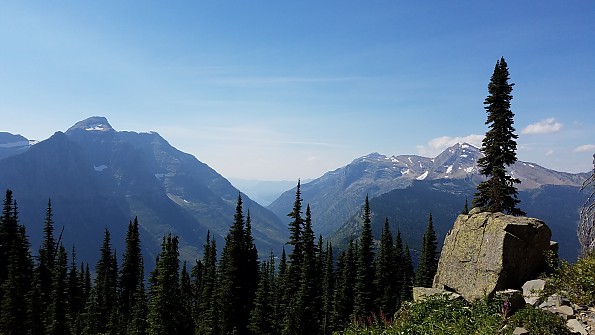 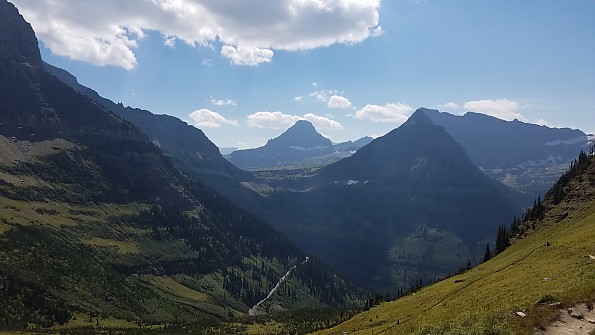 Views from the Highline.

All in all a mindblowing trip, i'll probably be adding more to this review but at a later date. I have lots of gear to comment on as well.

Awesome photos!  That is quite the trip and a solo excursion at that.  Thanks so much for sharing.  I cannot wait to get up to GNP next year.  Cheers

Nice report and beautiful photos!... Thanks for sharing

Amazing trip Joshua! Thanks for sharing the pics even if they don't do it justice :)

Did you meet anyone along the way or was it 16 days of solitude other than the bears?

Nice TR. That would be a game changer for most people.

Where is home for you?

Awesome Joshua! I should be in Glacier this Friday! Unfortunately for me the free park shuttle stops running the day I arrive so I'll be renting a car that I'll only use for two days. Thanks for sharing and getting me even more excited. Did you fish?

I met quite a few rather great people on the trail. I did have 2 separate day periods where I didn't see another human, amazing considering how popular this place has become. I currently reside in Detroit, but I now have a plan on relocating to a couple of places in the west.;)

I did kick myself repeatedly for not bringing the fly rod. Just didn't make the cut having to pack 2 weeks worth at the beginning of my trip.

Also patman, I did complete walk up backcountry reservation without much difficulty. Once you get your first campsite you can piece together any trip you like on availability.

Yeah I fretted about my advance permits to get the route I wanted but now I've realized that they consider this time of year late season and there is all kinds of availability. (I guess to go along with the temperature drop). Here in East TN we've had a historically hot summer with endless days in the 90ies F. So I guess it might take a day or two for me to acclimatize to the 50 F highs I'll see next week.

Awesome photos...thanks for sharing and bringing back memores for me.

Patrick... hope you have a great trip with no fires!

Nice Pictures and TR. My niece had to readjust her trip there last summer do to the fires..But she had a blast..She'll be going back again next year...Patric have a good trip...

Have you ever considered a hand line?  In remote locations, fish will hit everything in sight. Use a stick for a reel.

Those are beautiful pictures, Joshua, and it sounds like an amazing trip! Thanks for sharing some highlights with us.

I know next to nothing about fishing, but I'm curious, have you ever considered taking a Tenkara setup with you on a trip like this?

Nerves of steel.  Look up tenkara rods for backpacking instead of lugging around a western setup, as Alicia suggests.

Thanks for the heads up on the tenkara set. Will definitely be in pack for next trip.

I'm intrigued by tenkara and may buy a setup next year. If you get one, I hope you'll share a review of it and how ti works out.

Thanks for sharing this report and beautiful pictures, Joshua! I went there in June for the first time and loved it. I'm jealous that you got to go to Gunsight Lake! I wanted to go there really badly but the trail wasn't quite open yet. I also love that Red Eagle Lake picture. Gorgeous!

Waaa! I want to go there!

More Topics
This forum: Older: JMT 2016 - An Unfinished Journey - First week Newer: VIDEO - Join me on the summits of some Colorado 14ers!
All forums: Older: Do you keep a list? How long? Newer: We're Giving a Hilleberg Akto Tent to One of You