Much of the Eastern Sierra is managed, requiring parties to obtain access permits for their trips.  Most of the trails with mandatory permits also have limits to the number of people allowed to enter the backcountry.   One advantage of quotas regulating backcountry use is they effectively limit human impact, assuring some level of seclusion.  One disadvantage is being excluded because your group couldn’t agree upon the trip dates before the quotas were all filled.  Such was the case for a trip that included the weekend of 7/20/2017.  We wanted to do an Eastside trip, but the only available regulated venues lacked scenic appeal or were difficult routes.  In such circumstances it is good to know a couple of unregulated, quota free “secret” spots that are off the radar of the crowds, venues you can gain relatively easy access and enjoy in solitude, even in the high season.  This is one of those trips. 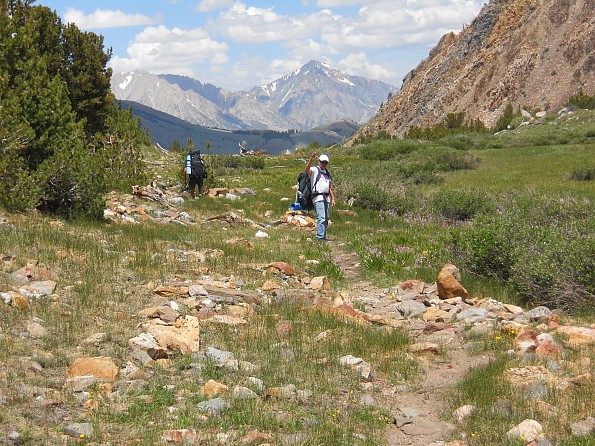 Let me be frank: I am not about to reveal the trail or camp destinations of this hike, other than to say it traverses several of the drainages above Bishop and Big Pine, Ca.  The other clue I’ll give you is  the primary objective of the hike included attaining an overlook along the ridgeline of the Inconsolable Range that permits utterly amazing views down into chain lakes and headwaters of Bishop Creek, and the chain lakes of headwaters of North Fork Big Pine Creek and chain lakes and headwaters of Baker Creek.  Our base camp location was a lake the local Paiutes historically used as a summer camp for respite from the searing heat of summertime Owens Valley.  In fact the Paiutes continue to visit the area and count among the most frequent visitor demographic.  Summer is fire season in California.  Fortunately for us we were ten miles south of the smoke plumes blowing from the west over the Sierra Crest, the result of wild fires near Yosemite; otherwise it would have been like camping in smog. 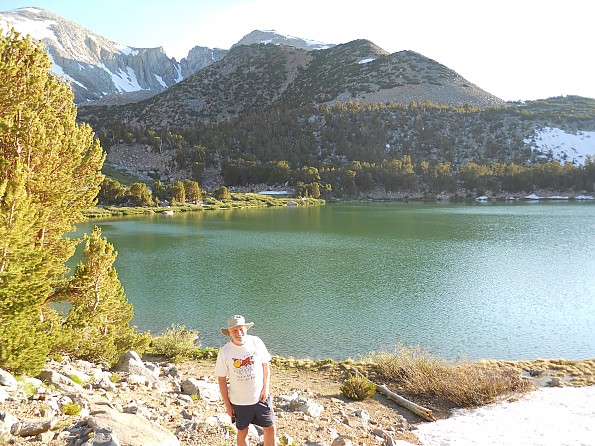 Our base camp was a lake at 10,100' elevation.  While more popular venues were crawling with day hikers and backpackers, we saw only six visitors during our four day stay. 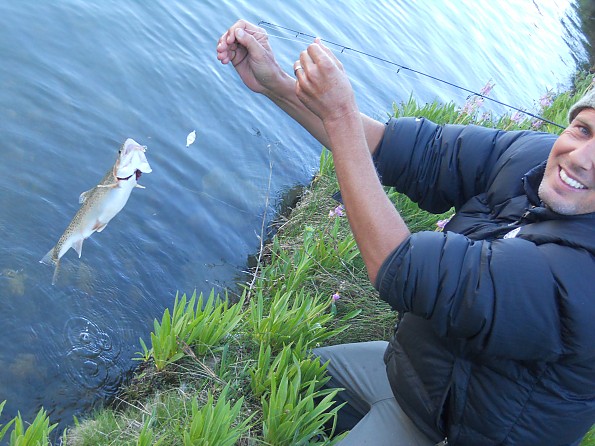 Our base camp location was chosen in part because it boasted great fishing.  We were catching 14" rainbows - very good considering the high elevation of the lake.  Unfortunately the fish offered no fight, we might as well been reeling in trout filets from the grocery store!  The lake was plenty cold, so we hypothesize the lack of fight was due to cloudly water.  And the cloudy water was probably due to the volume of melt off flowing from the slopes into the streams and lakes.  This seemed only to affect the nearby lakes that had flora on the surrounding slopes.  The nearby lakes with minimal flora were not affected.

As others have commented about their recent Sierra trips, we noticed the snow pack has lingered into the summer.  In fact I do not recall so much snow this late into the season, since the mid-1980s.  There were pockets of snow at 10,000’; while shaded areas and north faces above 11,000’ supported enough snow one could ski the upper bowls if they brought along their boards.  Along with the snow were the mosquitoes.  Normally skeeters are not an issue on the Eastside in July, but everything was still wet, the meadows sodden, the trails often partly flooded with fresh melt off.  In fact one section of trail was under two feet of water, requiring a XC scamper over a field of large boulders to pick up the dry trail further up.  Lower down, Bishop Creek and Big Pine Creek were both raging, and dangerous to the unwary, such were the volumes of snow melt running off the mountainsides. 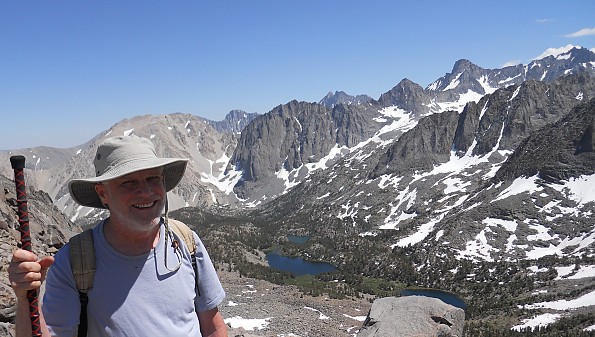 North Palisades Basin from the 11,500' pass just south of Thunder and Lightning Lake.  Temple Crag is the dark massif on the horizon at the center of the picture.  Mt. Sill (ele 14,153') and North Palisade (ele 14,248') are the high points on the right side of the frame. Lakes #5, #6, and #7 of the Big Pine Lakes prominent along the valley floor.

We failed to attain the overlook on the ridge crest of the Inconsolable Range.  The last few yards of the route was blocked by a steep snowfield, and deemed unsafe to cross without an ice axe.  But we enjoyed the long XC trek getting to that point.  That’s the thing, one doesn’t need to be goal focused, the walk itself is the destiny. 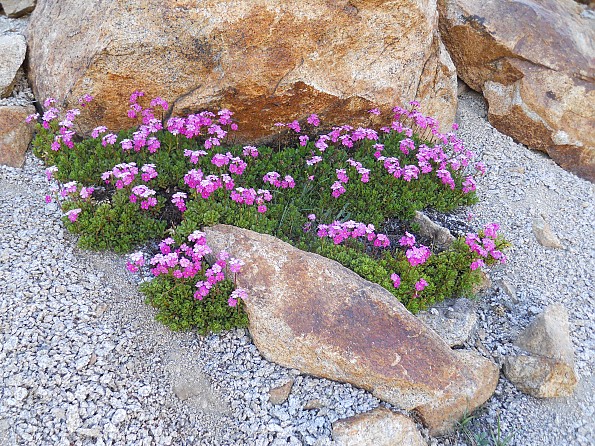 There were flowers everywhere, but most striking were the small, isolated clumps found in the otherwise barren boulder fields well above tree line.  Shown here: Primula suffrutescens nestled far above the headwaters of Baker Creek.

Looks awesome!  Nice fish.  Did anyone have a thermometer to check the water temp?

Looks awesome!  Nice fish.  Did anyone have a thermometer to check the water temp?

No thermometer, but the water beyond the shallows was in the low - mid 40s, typical this time of year for large lakes at that elevation.

Nice pictures...I dont blame you for keeping your secret spots just that,,,Looks pretty awesome...Glad your getting out when you can

Looks like the weekly 10' snow dumps they got this winter was just what the Dr. ordered for that area

Thanks for the photos and report - always nice to see your shots from the Sierras.  I know you won't disclose locations of the permit and crowd free areas, but once I get my plans together for a trip out there in a couple of years (too many trip plans to go sooner!) I may have to swing by and pry the secrets out of you over a whisky bottle...

Great report, thank you for sharing!

The mountains are nice and all, but I was really impressed with the fish! Totally understand why you don't want to give out too much info. Thanks for sharing this one as much as you did.

The east side of the Sierra's is just about my favorite place to spend time in the backcountry. Thanks for the report!

Ed makes a good point that even in the popular areas there are plenty of places under the radar.  I love the eastern Sierra. We stare at the eastern front from the living room. It is a hikers paradise, but I rarely need permits and have never used a bear cannister.

Yea, I mostly use my bear canister as a stool, bucket to haul water for camp use, and vessel to soak my laundry on long hikes.  Even if I bring a canister, I still use a bear hang, as I don't like intermingling trash with groceries.  This technique is very effective; bears have never made off with anything from my camps in the 45+ years I have used it.

As far as bears go, I see regular evidence of them checking out my camps along popular venues, but they are stealthy late night visitors, make no noise, and leave only some tracks to record the occasion.  My camps off the beaten track infrequently get visited.  There was no evidence of bear visiting our camps on this trip, but we did observe scat along approaches to passes connecting major drainage basins.  My hypothesis is bears have "Yogi the Bear" circuits they patrol when foraging for easy pickin's from human camps, and don't bother regularly checking up side canyons away from the beaten track, or venture into significant highland basins not frequented by campers.  They may have learned campers in these off beat locations are more savvy as a group, and not inclined leave edibles laying about.  Snow camping is another issue.  The bears seem to venture into the higher reaches more frequently than during the summer season, and their movements less predictable.  If they do hibernate, they are back out foraging by mid March.

So pretty. I want to go!