My wife and I had a couple of days free between family events in Pennsylvania. We decided to take a short overnight backpacking trip in West Virginia, as we wouldn't have time to do a 16-hour round trip home to see the total eclipse. So it was off to the Dolly Sods Wilderness... 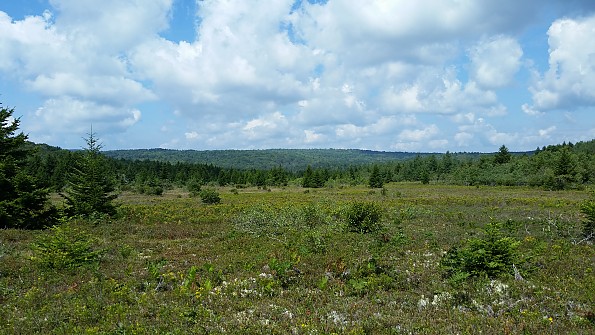 For those not familiar with the area, the Dolly Sods are basically a plateau of rolling hills bisected by a couple of large streams.  Around 4000 ft elevation and relatively undeveloped, the area was once used as a bombing practice range for D-Day... 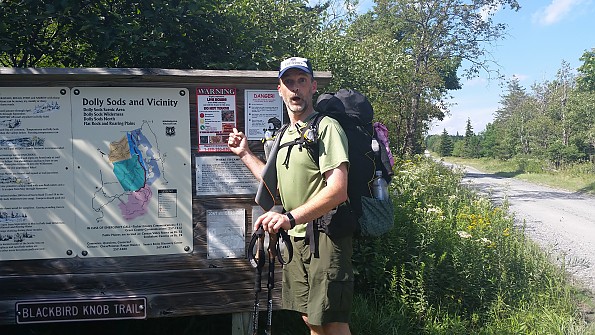 There are warnings about un-exploded ordinance still present in the area, although from what I understand the last find was in 2014.The parking areas were busy with campers and day hikers, but we soon lost most of the people as it was a Monday.  I imagine this area is very busy on weekends. 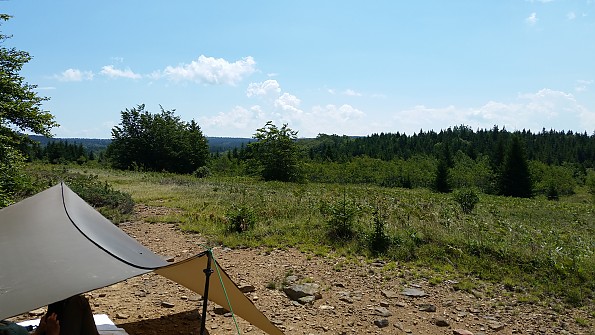 After starting at the Blackbird Knob Trailhead, we had a short hike in and diverted north on the Red Creek Trail. We set up a luxury shaded lunch area in an open spot with great views to the south so we could enjoy the partial solar eclipse. 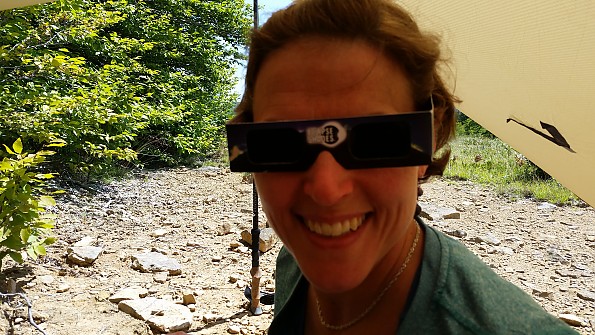 My wonderful wife had packed a couple of pairs of eclipse glasses that we bought back in the mid-2000's. 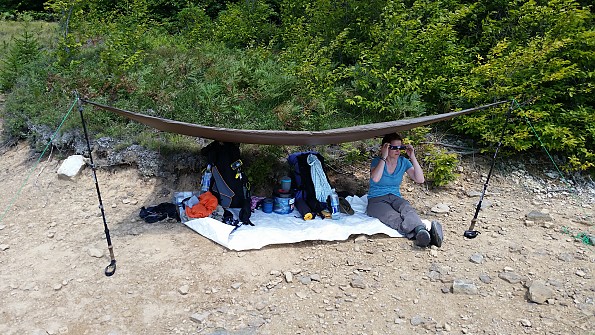 Our lunch tarp was folded back and we enjoyed the first half of the eclipse...no great photos unfortunately as camera equipment is too heavy for my old knees!

After we reached the maximum partial eclipse, the temps for an August afternoon were a fantastic 70 degrees so we decided to hit the trail again and take advantage of the cool down, and pause every once in a while to check on the back half of the progress of the moon over the sun. 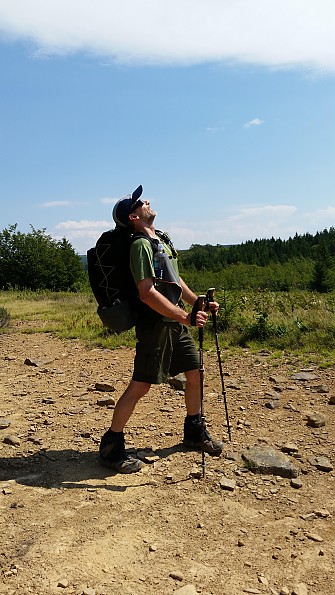 We had a beautiful afternoon walk along rolling hills and across pretty streams... 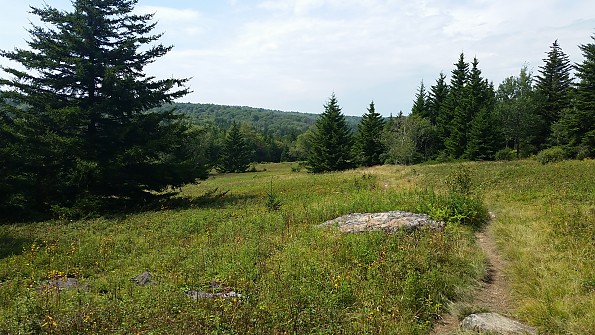 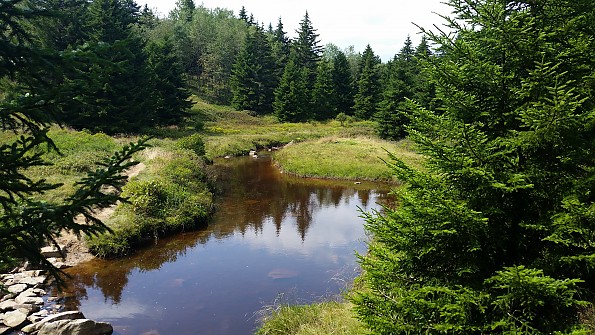 After a last check on the waning eclipse...

We then descended along the rocky and muddy Big Stonecoal Trail.  The amount of mud reminded me a lot of the White Mountain boggy areas - the Dolly Sods is well named!

Although planning to hike into the evening after the long eclipse/lunch stop, we found a fantastic campsite that couldn't be passed up...I usually don't use established camps if I can avoid it but how can you walk past the Camp of Thrones? 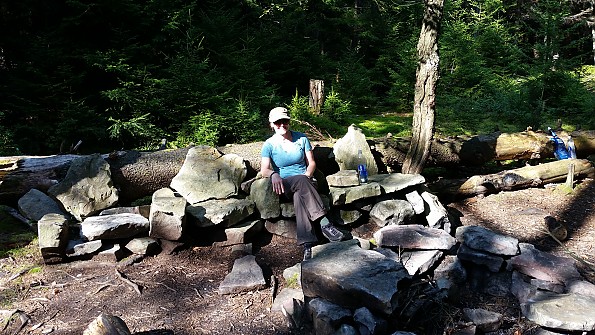 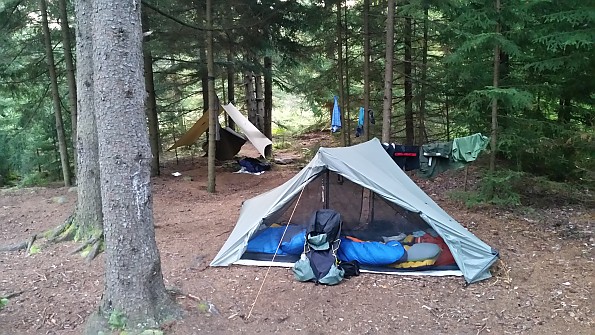 A peaceful starry night and relatively cool morning allowed for a nice hike down to the Rocky Point Trail through many of the varied natural communities in the Dolly Sods.  It seemed like we changed communities every time we blinked...the next few photos were taken within 45 minutes of each other...

My wife and I really enjoyed the morning hike as it wasn't too wearing except for sections with small shifting rocks, and the temperatures stayed relatively cool.

After a very steep but short climb up to the Lion's Head, we arrived at a really great view and lunch spot.

I searched for a while but found no man-made features in the viewscape.

You are not likely to fall off the edge unless you are silly...this is as close as I was allowed to go to the edge!

but watch your step as the cracks and crevasses between the rocks are deep...

The afternoon hike was much warmer than the previous day and we were wishing for another eclipse to cool it down!  Fortunately the open high country was broken by forest copses and pretty stream valleys to camel up and take breaks.

Due to our family commitments we had to cut our trip to one night, and missed out on the northern section but we really enjoyed this beautiful wilderness.

I'll be back to further explore this fantastic area and all the trails!

Phil looks great and that camp site looks like some one put you in a bunch of recliners. Did they leave you the remote LOL! Can't wait to finally make it up there. Jeff and I are targetIng it for this year October  but just not sure if I'll be able as I'm making such good progress on this house right now. Dang thing is holding me up from getting on trail.

anyway thanks for such a great report and pics

Looks like a fun one Phil. Clothing and smiles are making me assume the bugs weren't too bad :) Thanks for sharing!

Wish my wife liked backpacking.  You're a lucky man, Phil!   Maybe I should have said tolerate backpacking, as no one I am familiar with likes hauling a pack around.

Ed...I consider myself very lucky to be married to her for many reasons. Our backpacking deal is for every 1 or 2 night trip we balance that with a nice dinner and a BnB stay.

Tolerate a backpack is a good word for anyone except the weird ones...I personally love the feel of a backpack on my back and the anticipation of the trail and freedom to wander.

Tolerate a backpack is a good word for anyone except the weird ones...I personally love the feel of a backpack on my back and the anticipation of the trail and freedom to wander.

Anticipation is what gives me the courage to put on a pack, but I wouldn't call the relationship with my pack one built on love.  But since it is your thing, you can haul my pack, too, if we ever do a trip together.  The more the merrier, right?  Weird it is to like hauling a pack, but the sick ones are the likes of Tipi Walter and moi, with our packs tipping the scales 75+ pounds on a regular basis.  I have high tolerance.  Come to think of it all backpackers are a little off, or slow to learn - didn't we domesticate burros for this task?

Those of us stubborn enough to haul ourselves and gear up mountains are part burro anyway...at least my wife calls me one occasionally using another term!

I wouldn't love carrying Tipi/Ed backpack weights...that takes courage or something. 20 or 25 lbs is something that feels good especially mixed with the anticipation of what's ahead.

Great trip Phil! I feel like the only thing I would have been anticipating on that trip is hidden ordnance :-P

Yeah...the ordinance thing has me debating if I should do my usual off trail wanderings next time...thickets and ravines etc I can handle but bombs?

Ed...that's one of the many reasons why I hike solo most of the time...no need to worry about other folks booming on snoring...of course I don't do either as far as I know...like a tree falling in the woods with noone around doesn't make a sound!

Looks great! I wanted to backpack for the eclipse, but I'm the only one in my family who loves doing it.

Had a friend hike the sods 4 months ago..You got better pictures LOL Thats on my bucket list...