Showing Off Yosemite to the kids 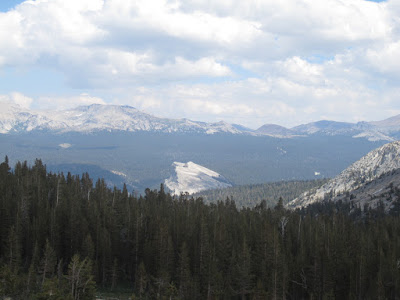 With our daughter and her husband in town, we wanted to show them a bit of the Yosemite High Country that we love so much.  And so we aimed at Tuolumne Meadows.

Months ago, when we first planned this trip, we asked for a permit for the Budd Lake trailhead.  This is a trailhead that doesn’t appear on the list of trailheads in Yosemite, and it doesn’t get a lot of use.  The quota is only five people per day…and there were going to be four of us.  Since only three of the spots were reservable, we had to add one last person when we picked up the permit.  Which wasn’t a problem, although the ranger at the Wilderness Office made it seem quite a bit more serious than we thought it should be.  Sigh.  Still, we got our permit and we were off!

With the fires in the southern part of the park, and a forecast that called for 20-40% chance of thunderstorms, we had our doubts about the whole thing. The smoke was so bad at Olmsted Point that we couldn’t see Half Dome, but when we got to Tuolumne Meadows, there was no smoke at all, and the sky was clear.  All systems go.

There is no maintained trail to Budd Lake, and camping is not allowed in the Budd Lake basin. So we followed the Cathedral Lakes trail for a bit, then broke off along a use trail to follow Budd Creek up the canyon.  It was lovely hiking, but quite steep, and starting off with this hike a day after spending time at sea level is a cardio-vascular challenge. 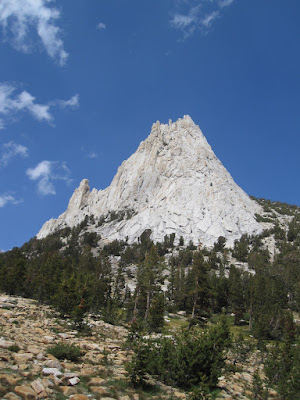 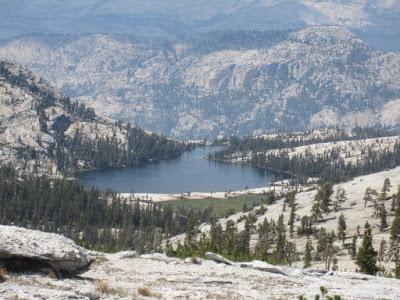 But if you are really interested in following in our footsteps exactly, you’ll take the FIRST use trail over to Budd Creek, cross the creek, then just follow the creek up the canyon.  Eventually, where a tributary comes in from the left, we crossed over to the right (West) side of Budd Creek, and then landed on the climber’s use trail to Cathedral Peak.  We followed this past the first trail crew taking a break, then continued up almost to the base of Cathedral Peak, where we could see the lovely ridge heading over to the pass below Echo Peaks.  A second trail crew was eating lunch here.  We set off to the left along the ridge above Cathedral Pass, and ate lunch on top of this ridge.  We then crossed over to the use trail route that contours along the base of Echo Peaks.  To find this trail, just keep as close to the base Echo Peaks as you can on the West side…. 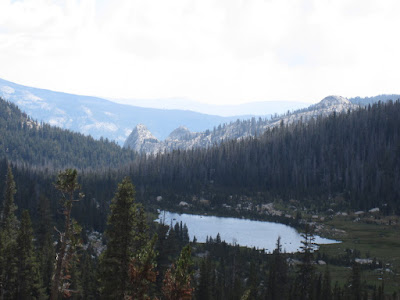 The route then leads you down a narrow chute for about 200 yards, until a small canyon breaks off to the left.  That’s your opening to the gentler slopes between Echo Peaks and Matthes Crest.  (The South face of Echo Peaks is too steep for us to tackle, although the climbing ranger who was supervising the upper trail crew suggested that he chose that option.) Follow the little creek canyon for about 75 yards, and you come out into the forested slopes above Echo Lake.  If the going ever gets too steep, just head left until you feel better about things. 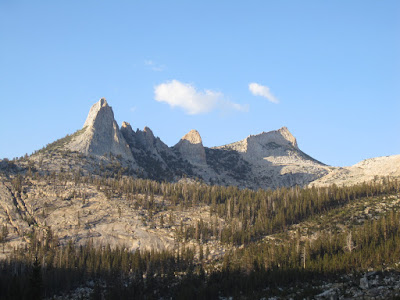 Once down at Echo Lake we spent some time finding a campsite. Since there were four of us, we needed something a bit larger than usual. And it was windy, so we wanted something that was sheltered.  We finally settled on some rocks up above the lake to the West, well hidden in the trees.  After a nap, Estelle and Nico decided their tent site was not flat enough, so we moved them fifty yards to a better site.

The forecast called for 20% chance of rain, but the clouds only looked a bit gray, not threatening, and once the wind died down we had a lovely dinner and settled in for the night.  We expected it to get cold, and the temp was just about freezing when we got up the next morning.  Bundled in hats, fleeces and puffies, we cooked breakfast and eagerly awaited the arrival of the sun down in the canyon. 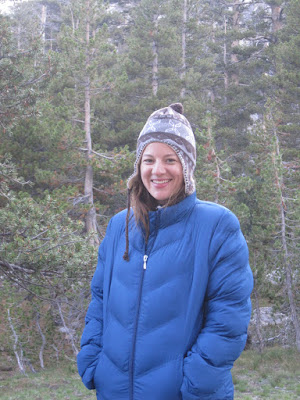 Once it arrived, we decided to hike over to Matthes Lake in the morning.  This is an easy hike, and the route finding is also simple.  You just have to go around Matthes Crest to the south.  There is some talus in the way, but we have yet to find a route that is too hard.  Staying closer to the granite slabs of Matthes Crest usually gives you some better views, and avoids too much up and down. 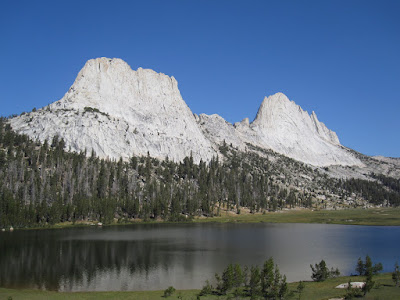 Mathes Lake itself is stunning, and we spent some time enjoying the view.  Estelle went wading in the lake a bit, and we saw a few fish jumping in the morning light.  After a snack and a drink, we went back to our camp at Echo Lake, and came to the decision that we would hike out that day.  We ate lunch, strapped on our packs, and headed up the valley towards Cathedral Pass.  Near the top, the large meadow was boggy in places.  Estelle and I went through the meadow and got our feet wet.  M and Nico stayed to the left and found a longer route and drier ground.  At any rate, this part of the hike was wonderfully easy and a real delight. 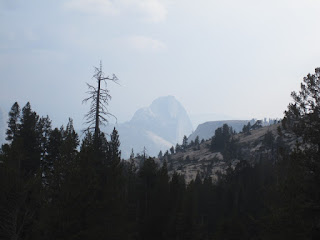 Once on the John Muir Trail at Cathedral Pass, it was a whole different story.  The trail is quite abused.  Lots of rocks, clouds of dust, and hordes of hikers made this our least favorite part of the whole operation.

We did meet a wilderness ranger on the trail who carefully checked out permit and chatted with us.  And then we hiked the last three miles down to the car through the rocks, dust, crowds, and even a service dog.  A few sprinkles of rain were all we felt, and that only at the very end of the trail.

We drove up to Tioga Pass to show the kids a view more views, and got a few more showers on the way.  And off behind Unicorn Peak to the South, the clouds looked considerably blacker and more menacing.  On the way out of the park we stopped at Olmsted point for a couple of photos shrouded in smoke from the fires, and then drove back to our cabin, getting just enough rain to turn on the wipers to “intermittent” a few times. Hot showers, warm food, and a soft bed were the perfect ending to the trip. Here's a link to the rest of the photos: https://photos.app.goo.gl/SjJYthqYxaPlgPXk2

Didn't know there was a "back door" into Yosemite that's not too crowded...good to know. Great photos as always!

I climbed Cathedral Peak and the north peak of the Mathews Crest formation back in the 1970s, via the JMT.  That was before quotas as reservations were imposed.

Indeed the route to Budd Lake is a lesser used trail with good reason: I tried following your route on my Nat Geo maps, Topo.com, and USGS maps, but none charted any trails to Budd Lake.  Kind of weird they have a quota for a destiny that can only be reached via undocumented climber and fisherman paths.  (Perhaps they are documenting trips into this area to track climber activities?)  Even more strange is they have crews maintaining these routes.  Looks beautiful, though.

So out of curiosity, how did you become aware of this route and that you could register specifically for Budd Lake?  I would have registered for the JMT, being none the wiser, and hoofed it XC as you did.  How does one determine if destinations like Budd lake have quotas when they are not publically documented?

You have to know your way around the reservation system.  Budd Lake and Nelson Lake are both backcountry trailheads, but neither one has a trail!  We've used both from time to time.  The requirement is that you have to cross over to the south side of the Cathedral range crest before you can camp for either one, and while there are use trails for part of those routes, there is no real trail.

That discourages most folks.  And the route over Echo Peaks to Echo Lake is hard hiking for a few miles.  Not recommended for those who are challenges by navigation or an occasional need for class III, although we didn't need that.

You write so well..I really enjoy your posts about your trips...Trying to figure when I am going to go on trip to the left side of the country...

You have to know your way around the reservation system...

So I looked at the NPS web page for Yosemite.  Quite Byzantine!  I could find no reference to the Budd Lake trailhead in the obvious links (i.e. lists and maps of trailheads); yet it is listed in a link identified as the Full Trailheads Report.  Trailheads only appear on this report if one or more dates for a given trailhead are fully booked.  If a quota controlled venue like Budd Lakes is not on the Full Trailheads Report, and not listed in any of the other links appearing on the Wilderness Permit web page, where does one go for a complete list that includes the likes of Budd Lake?

where does one go for a complete list that includes the likes of Budd Lake?

Well, I didn't say you have to know your way around the website.  We've been hiking Yosemite for something over forty years, and after a while you begin to find your way around.

Wow Paul !  If your skills navigating the BC are anything like learning to navigate uncharted government red tape, I bet you never get lost!

So basically its local insider knowledge, to know that certain trails and destinations are quota controlled?  Given the lack of publically available info, I wonder then what are the permit desk personnel accessing that makes them privy to these data, but not the rest of us?

Not exactly.  All the trailheads inside Yosemite have quotas, unless you count Saddlebag Lake, which is actually outside the park.  But when you start looking for trailheads, the more popular ones are always listed.  The less popular ones--especially those that require an initial XC leg to get started, are not usually on the list.  They still have quotas, and the quotas are small.   Budd Lake is a total of five people per day.

The first step to visiting Yosemite is to figure out how to avoid the crowds.

I am planning a winter trip in a wall tent with a wood stove.

Topic: Showing Off Yosemite to the kids