My nephew and his wife drove over from Vegas to see a Foo Fighters concert in Fresno.  They were going to drive home the following day (Saturday), but I told them that as long as they were all the way here we might as well see something.

My nephew went on my big backpacking trip last year, so he is familiar with what the Sierra has to offer. But his wife has never been here. Since they got in late after the concert, leaving early to go on a good hike was out of the question. We settled on a quick visit to Giant Forest to do a five-mile loop that I like.

I won't bore you with a huge number of tree pictures, I'll stick to a few of my favorites.

We started at the Sherman tree: 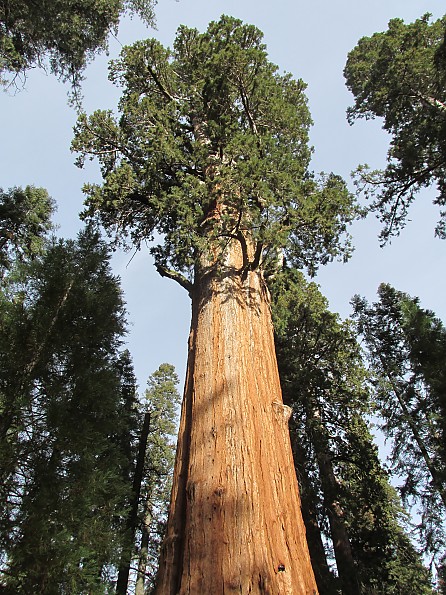 From there the next on the list was Chief Sequoyah: 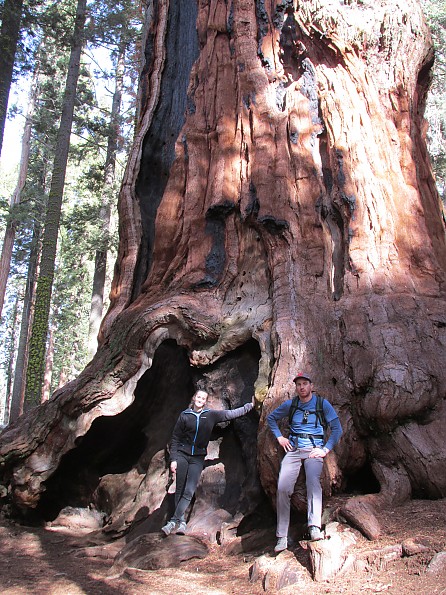 Close to Chief Sequoyah is the President.  If you subscribe to NatGeo, they had an article about this tree a few years ago.  They got a good core to count the rings, and dated the tree at 3400 years. 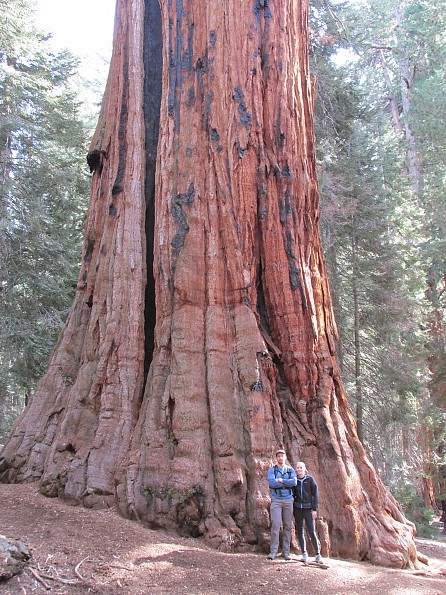 Next we saw the Senate and House groups.  I like to look up in the middle of the House group: 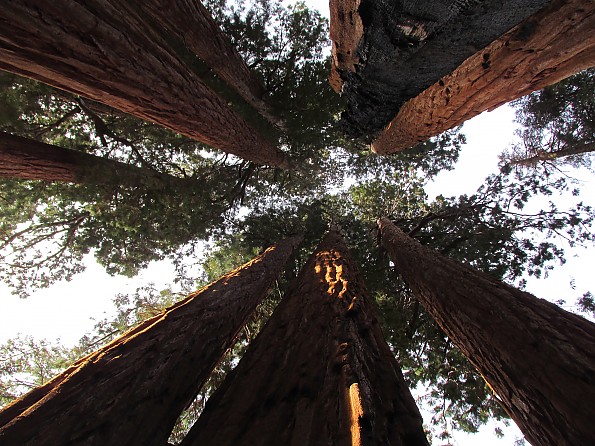 At the House group: 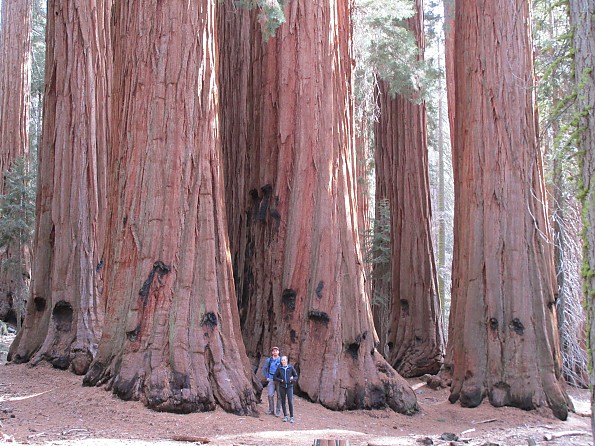 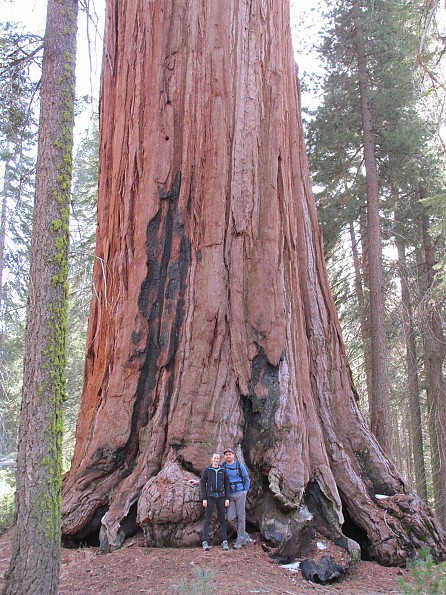 And near Franklin is Washington: 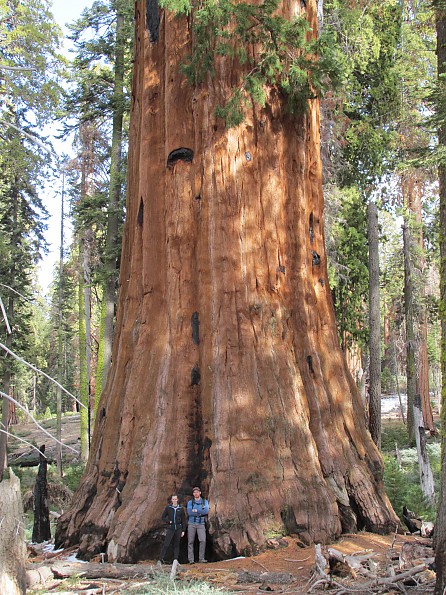 Washington used to be the #2 tree on the list of the largest (after Sherman).  About 14 years ago a fire damaged the already weakened top half of the tree (an even earlier fire turned the top 100' of the tree into a living chimney).  In the winter of 2005 the top of the tree collapsed, so it no longer makes the list.  I was there with some scouts the day the fire happened.  We walked by a slowly smoldering fire that was near the tree, and spoke briefly with the fire crew that was watching it (they did not extinquish it because it was a natural lightning-caused fire).  That night the fire picked up and got into a lot of deadfall around the Washington tree.  So we were among the last people to see this tree in its full glory.  Now it is a 115' stump with a few branches at the top (mature sequoias rarely have branches in the first 100' so there weren't many left after the top of the tree collapsed).  it will still live on for many years as it now is.

After Washington we saw Lincoln: 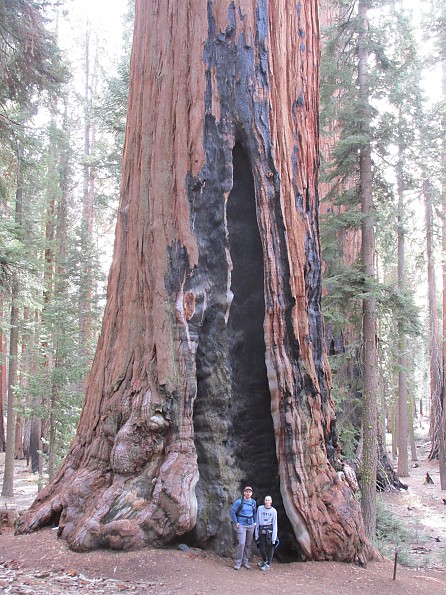 After the walk in Giant Forest we made a quick visit to Moro Rock, here are the views looking east and west from there: 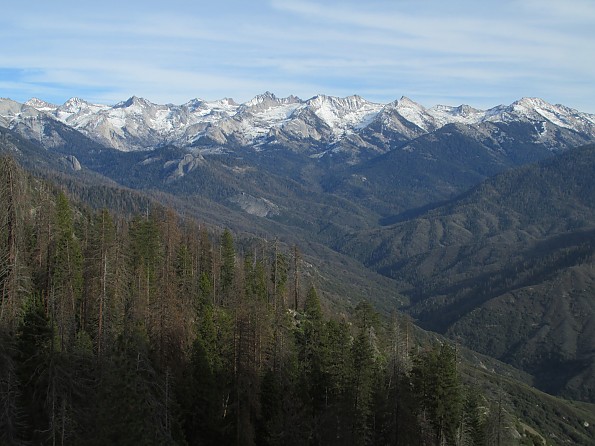 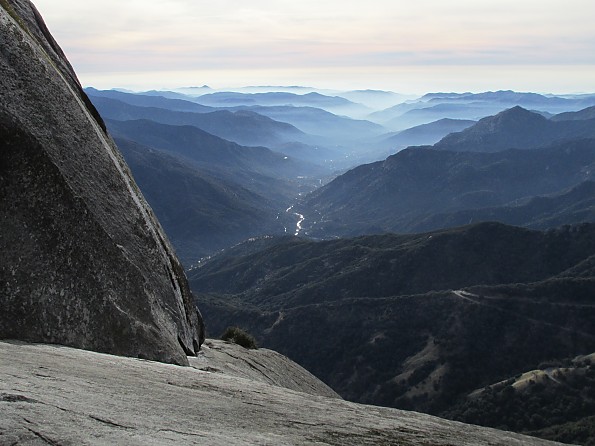 Looking east you can see the Great Western Divide and the Kaweahs, and looking west you can see down toward the San Joaquin valley where I live.  Moro Rock is at 6700'; looking east you look up 7000' to the Kaweahs (the highest visible points are Black Kaweah and Red Kaweah, both at 13,765').  Looking west, the valley floor is at 300'.   I can see the Kaweahs from my house, making the total visible vertical over 13,400'.

Looking east I was really itching to get out to the high country.  Just to the left of the highest point (Black Kaweah) is the saddle that we crossed last summer on our way out from Kaweah Basin.

In the gift shop I saw sequoia seedlings for the first time in a long time, so I got one and sent it to my brother in Tennessee.  I sent him three about 16 or 17 years ago.  He planted two in his yard and gave one to the UT arboretum.  A couple years later when he moved he tried to transplant the trees but they did not survive the transplant.  The one at the UT arboretum grew well for a while, but after some years had gone by it seemingly disappeared.  He does not know if it was intentionally removed or if it died on its own.

Hopefully the new one will thrive.  They are relatively fast growing trees.  They reach full height in about 800 years or so (like the ones in the House group picture above, most of those are probably in the 800-1200 year range).  There are some trees that were planted in various parts of Europe about 150 years ago that are already around 150' tall.

Thanks sugar pine. Looking at trees is one of my favorite hobbies.  I have a photo of the largest tree in the National Forest System on my facebook page.  It is near the park and about 4 miles from the nearest road.  The trees of the Sierra hold lots of surprises.  The species diversity is very high, and some of the trees are huge.  Ppine, sugar pine, Douglas fir, white fir, Shasta red fir, western white pine, and incense cedar can also get really big.

Love those trees. In '81 I first came into the Giant Forest and saw my first sequoias via the back door: I crossed over from the East Side via the High Sierra Trail, after also having done the JMT. After 3-4 weeks in the woods I was already on a higher plane, and seeing those trees lifted me even higher. I wasn't quite ready for civilization so I got some supplies and went back in for one more night, in a fire-hollowed giant somewhere in the back end of the Giant Forest. Unforgettable.

Some of my best trips in the mountains have been to off beat locations just outside NPs, where there are some huge old growth trees that are not well known. There are no parking lots, no nature trails, no signs and the trees don't have names.  It is like being a cathedral built by God.  Naturre is my religion, and old growth forests are the most sacred places.

Awesome John, thanks for sharing this!

While not on the same scale as the topic of this discussion, I recently came across some giant tulip poplars while far off-trail in the Smokies. It was really cool and special.

Thanks for sharing some tree pictures, lambertiana. I love checking out trees!

I really enjoyed my time in Kings Canyon and Sequoia National Parks a few years ago. Trees are so impressive and amazing. It's beautiful and awe inspiring to consider what is in our world.

I also was amazed by the Bristlecone Pines we saw in Great Basin National Park. It is staggering to consider how long those trees have been alive and what hundreds and thousands of years really mean.

The High Sierra has long been on our bucket list, this virtual tour bumps the visit up on our "to see" list....thanks for the inspiration!

P.S. We agree with 'ppine'....nature is our 'Church' and John Muir is the Pastor! When traveling we certainly treat it as such. Thanks again for the reminder as we plan our travels.

Preaching to the choir.  I love to show people trees and talk about them. They are just as impressive as the wildlife in many areas and don't run away.

The White Mountains above Bishop are a very interesting place to see giant old pinon pines. You just have to like traveling at  10,000 feet.

Beautiful pics! Thanks for sharing them.

It is not well known really, but there are a lot of old-growth trees in wilderness areas.  They are in remote areas far from roads where logging was never practical or economically viable.  Often these areas have a short growing season and the trees don't always get big, but they often get old.  When you are hiking, get in the habit of counting some tree rings when you find old stumps or trees that have been wind thrown.

With practice, it is easy to piece together the fire history and the competition going on in forests.  Long term protection from fire and reduced logging is allowing a lot of white fir and incense cedar to grow up under pondersosa and Jeffrey pine forests in the Sierra as an example.

Wow! Those trees look beautiful. I loved the story. Thanks for sharing.