Weekender in the Rincon Mountains near Tucson

From the terrace or patio at the back of our rental house in Tucson we look up at the southern front of the Santa Catalina Mountains: 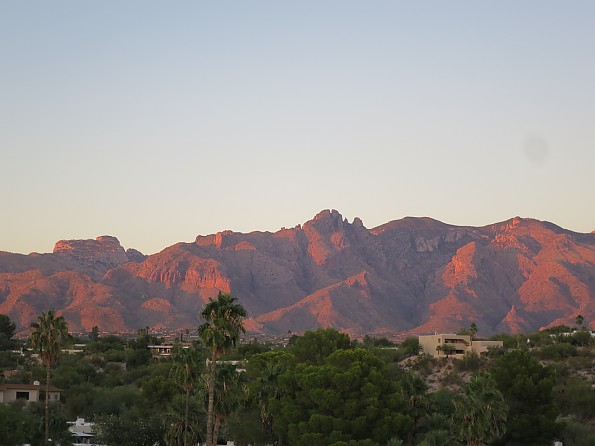 I’ve done a lot of day hikes and runs in the canyons up there and it’s beautiful but rough and so not so inviting for backpacking. Looking out various windows we can see other, somewhat more distant ranges – the Santa Ritas to the south, the Tuscon Mountains to the west, and the Rincon Mountains to the East. Parts of the Tucsons and most of the Rincons are in Saguaro National Park west and east, respectively. The Rincons are nicely set up for backpacking, with designated backcountry campsites located near intermittent water sources, all still dry in the winter drought we are experiencing this year.

The bases of all these mountains are in Sonoran desert, with saguaro and many other cacti, and a wide variety of desert shrubs. 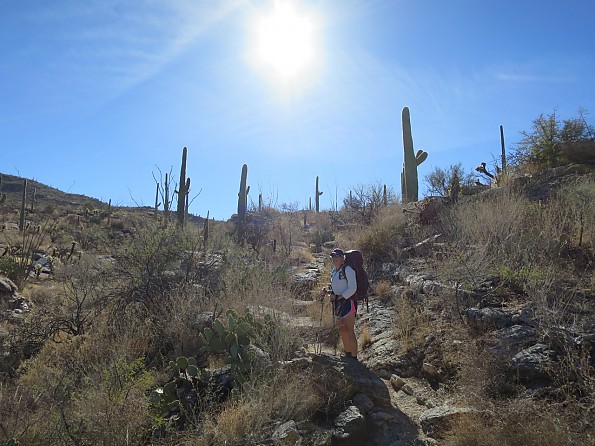 From there it grades up into a kind of desert oak savannah, 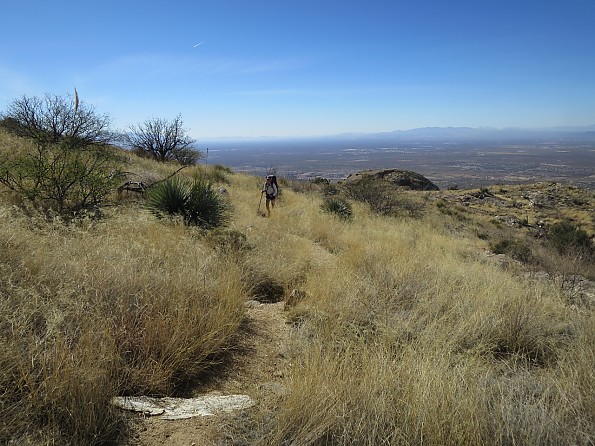 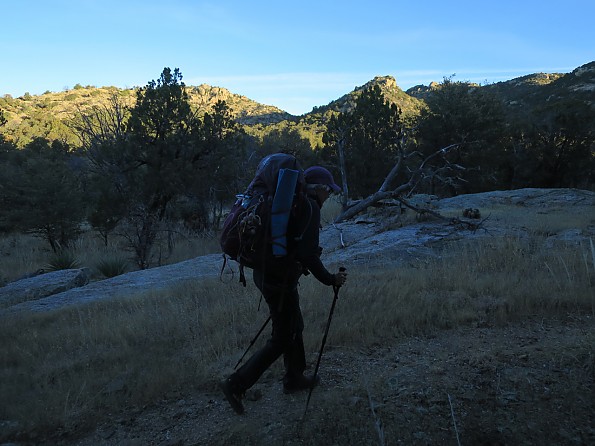 and then Apache and limber pine at up over 7000 feet, with some of the bigger trees right on top of Mica Mountain, the highest point in the range at 8666 feet. 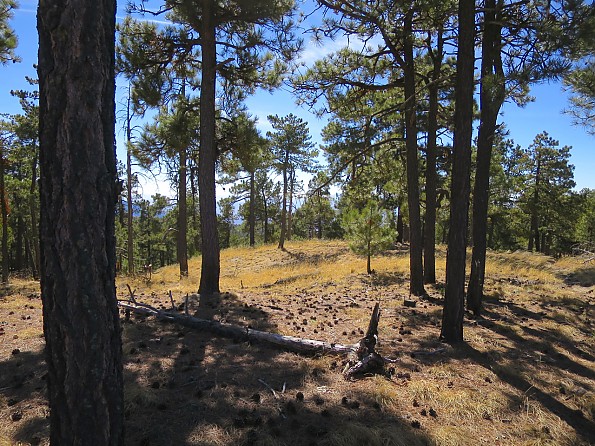 We dropped a bicycle at our exit trailhead, then drove around to our start on the Tanque Verde Ridge trail on the loop road in Saguaro east, stopping at the NP visitor center for backcountry permits ($8 per campsite per night, $4 for seniors :-)). We set off with enough water for two nights—I had 12.5 liters making up about half my pack weight and my wife carried another 5.5 liters. The 7 miles up to the Juniper Basin campsite were a long, gradual grind, but we didn’t hurry and made it up in about four hours. We kept our eyes open for the last saguaros at about 4500 feet. 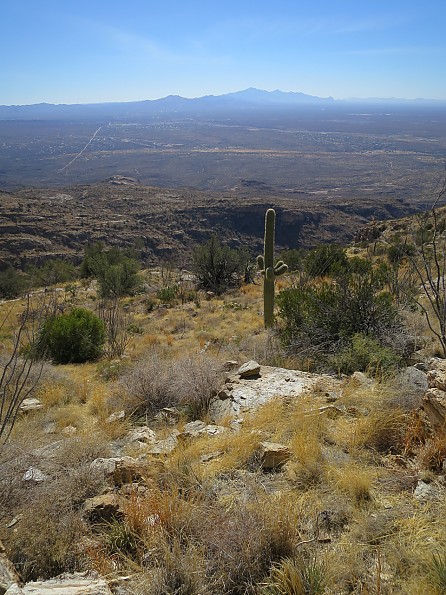 They are not very frost tolerant but also may be limited by fire that spreads via buffelgrass, an invasive species. From a distance, the vegetation looks conspicuously grassier above than below the “saguaro line”.

Juniper Basin lives up to its name, with three pleasant sites, well shaded by junipers and pinyons, alongside a (dry) creek on a broad section of the ridge. All the campsites have bear boxes, which help as much with mini-bears, everything from mice to ringtails and coatis, as much as the real thing.

We got an early start and continued up the ridge another 2.5 miles to Tanque Verde peak, a rocky summit with great views over Tucson and the surrounding desert and ranges. The manzanitas got a bit thick as we approached the summit. 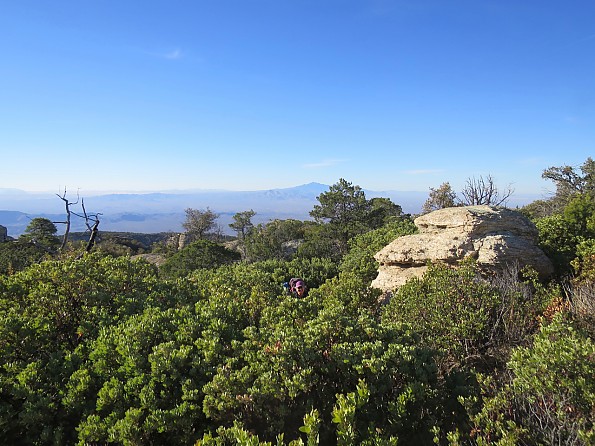 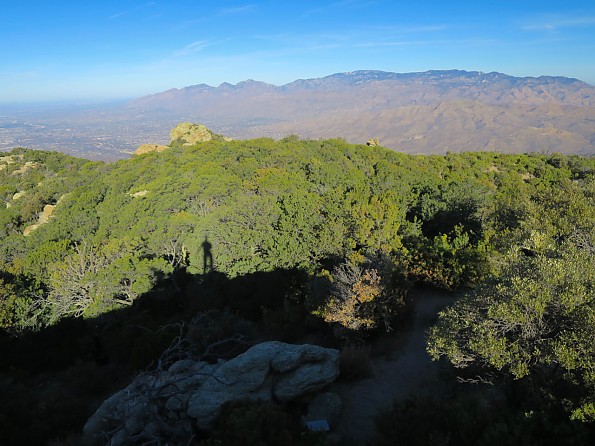 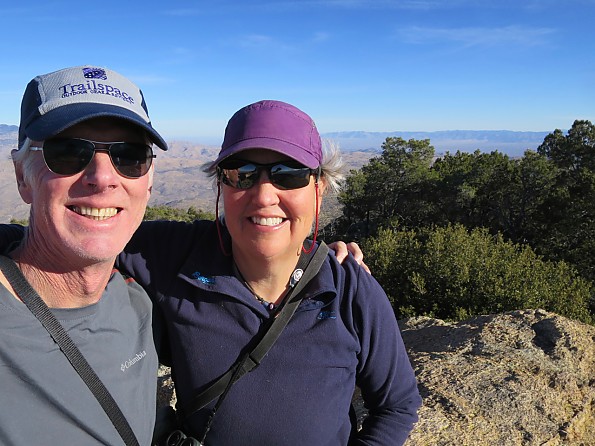 From there another couple miles down to Cowhead Saddle, where my wife settled down to wait while I dropped my pack and did a 10-mile hike-run up to Mica Mountain. The views from the forested summit weren’t much to write home about (but the trees were nice), but better from nearby Spud Rock. 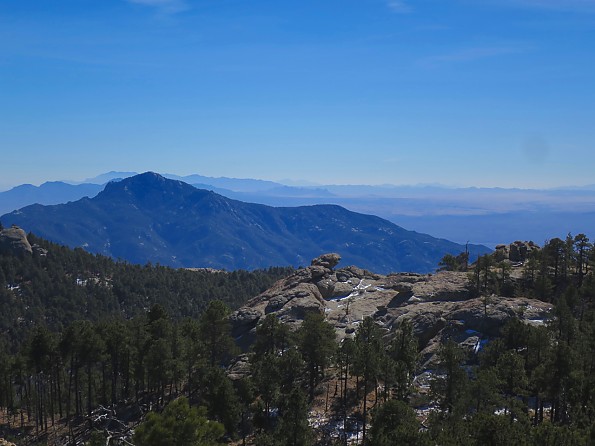 From the saddle we headed down to the Grass Shack campsite down at about 4000 feet but on one of the large (but currently dry) creeks draining the range, so the camps were under some nice big Arizona white oaks, with some smaller ash and sycamores in the mix. It was a windy night, which kept the air well-mixed so it was unusually warm.

Day 3 was a ca. 10-mi traverse across and down to get back to our exit trailhead, mostly on a section of the Arizona trail. Just a mile or two out of Grass Shack we crossed a creek that had a few pools of water in natural basins and cracks in a solid granite creek bed, presumably leftovers from a night rain we had a few weeks ago. 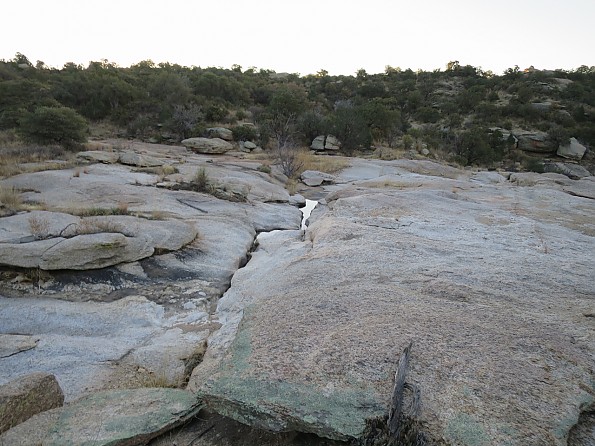 If we had known about these we could have made a little side trip to fetch water for our last night, but the pools were a bit green so filtering and purification would have been in order. We could have carried 6 to 8 liters less at the outset, though. We got the water about right, with about one liter left for me to use on the nine-mile bike ride.

Back down 'mongst the saguaros for most of those last 10 miles: 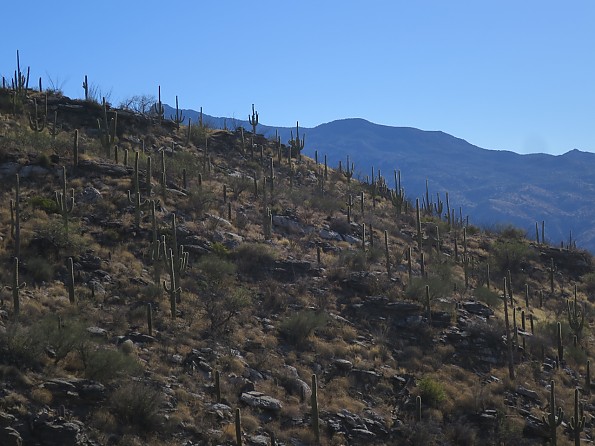 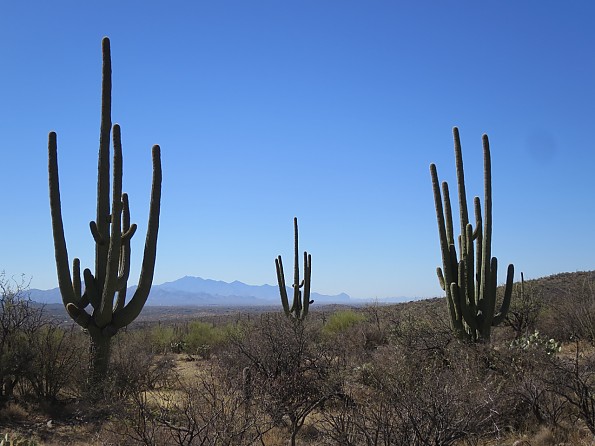 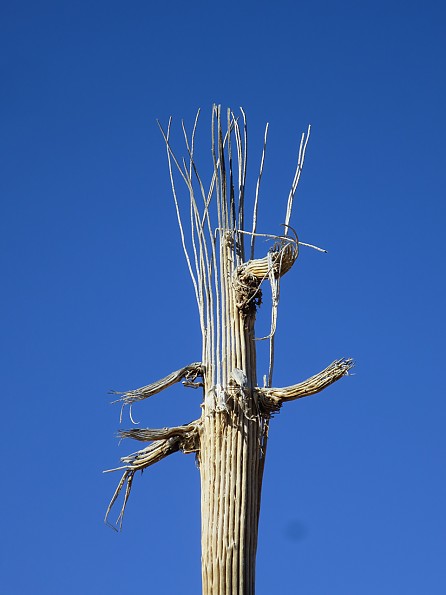 As it turns out a trail angel showed up just as I was leaving and gave us a ride back to the car. With afternoon temps getting up into the low 80s, the lift was most welcome.

The Tanque Verde Ridge trail, which we started out on, is hiker-only, but most of the other trails are open to horses. There's a big, horse-friendly campsite just a mile or so below Mica Mountain that I ran through but didn't stop to take pictures. Very little horse poop on the trails, though, probably due to lack of water. I think there are some dude ranches on the south side of the range that may run trips up there when the going is good.

This hike would probably be better if you could hit it under somewhat moister but not too hot conditions -- October after a good summer monsoon, or April after a more normal winter when there might be some recharge from snowmelt. In another winter we might well have had to deal with somes nsow on the higher portions of the route. With some transportation logistics, this could be extended another day or two to include Rincon peak, which I did as a day hike from the east side a few weeks previous. 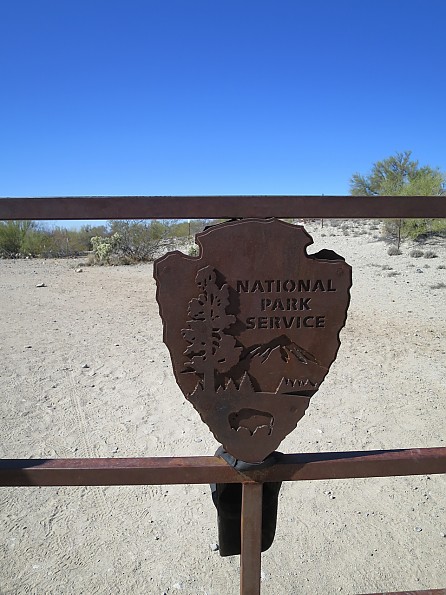 I love the desert in winter.  Nice trip report.

It is really fun to see how fast the vegetation changes with elevation in that kind of country.  We have two species of pinon pine in North America.  The single-leaf P monophyllum, around the Sierras and the 2 needls, P edulis in the Rockies.

In the Rincons it's a third pinyon species, Mexican pinyon (P. cembroides) with three needles, mostly in Mexican mountains but it makes it this far north. I also see it in the Catalinas.

Thanks BigRed.  I have never even heard of it.

You may already know about this, but my favorite one-stop for info on conifers (et al.) is the Gymnosperm Database. Includes ample if not exhaustive scientific info about basically every gymnosperm on the planet, including taxonomy, synonyms, distribution, habitat/ecology, conservation status, big tree (but not so much on silvics or physiology). Here's the page for Mexican pinyon, you can explore from there.

Mexico looks to be a major center of diversity for Pinus, with maybe 60 species + subspecies. All those California and western pines are just spillover :-).

My wife is convinced we're missing the Best Ski Season Ever in Trondheim. I'm just enjoying the desert :-).

You still in Tucson? I have been here since late October. I live just south of Sentinel Peak/A Mountain Nice trip report, I have not been in the Rincon's in 30 years.

Ah, great memories.  Of course, you realize that the wonderful country you enjoyed is there because of the valiant efforts of the fire crew stationed at Manning Camp during the summer of 1957.  Guess who was a member of that crew?

Very different situation then.  The trail to Tanque Verde Peak was not maintained and was very hard to follow.  There was a 100 foot high fire tower on Mica - one of our tasks was to tighten every bolt on it.  I was on about six fires that summer, none particularly big.

The first free weekend I hiked over to Tanque Verde Peak, learning about the overgrown trail.  about five days later, there was a fire below the peak on the northern slope and two of us worked as backup - it was actually easier to approach from HQ.  I learned my first valuable lesson - know the country in which you will be working.  I was involved because I had been to TV Peak and knew the route.

There was virtually no recreational use of the Rincons that summer nor camping fees, designated campsites, and all that.  I could see the U of A campus with binos and dream of all the coeds there.

Much later in my NPS career, I did some archaeological work in the Rincons and was chagrined to see how much archaeology I had disregarded as a youngster.

Rincon Peak was a heliograph station during the Apache campaigns of the 1890s and there must have been some sort of encampment near the Peak and Happy Valley Saddle. AFAIK, it has not been identified.

Small world! It looks like TV peak got burned over sometime in the last 20 or 30 years -- standing charcoal snags and nothing taller than about 5-10 m, lots of manzanita on top going over to locust down towards the saddle. But Mica escaped, cool and shady most of the way up there. We liked looking down on the "boneyard" at the AFB, thousands of military aircraft sorted out and lined up in rows over hundreds of acres. And the huge tailings and settling ponds of the Duval mine off in the distance. That's some big archaeology.

We are based in Tucson until August. The next few weekends are booked up, but I should be able to get away for a hike or two in March. I've been working away at the canyons and peaks around Tucson as day hikes (For example, yesterday I went up Bear Canyon to Thimble Peak and then around and down the Phone Line Trail in Sabino), but there's always more to do!

A Norwegian in Tucson summer? It gets very hot starting in April, by August its very hot! Late March is hot enough for me when I head back to Flagstaff.

I'll be in CO for most of July ;-). But I actually want to be around for some of he monsoon to seem some new growth and flowers. This winter is a bust :-(.

My first winter here was in 1983, the year the desert had a "100 year flood" It rained so much that the Santa Cruz Wash overflowed, everywhere was flooded with water. Sabino and Bear Canyon were closed due to the high water. And the desert got washed clean! It was my first monsoon.

Thanks for sharing this Big Red!