We’re back from a week-long adventure in Death Valley.  It’s something we’ve been doing now every other year for the past eight years, and we love it.  But this year was a bit different, to be sure. 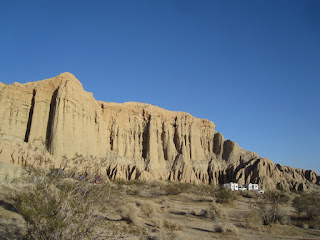 To begin with, neither of us was feeling on top of the world when we left home.  M was slowly working through her recovery from the flu, and P was a few days behind her in that.  So we had minimal expectations of what we might be able to do.

Of course, this was also going to be the shake down cruise of Le Vin Blanc, and we shook down immediately on the first morning, when we needed to charge the battery to start the van.  Even though it started fine after that, we finally decided to check the battery for real in Merced and ended up buying a new one.  Problem solved in an hour at Pep Boys. 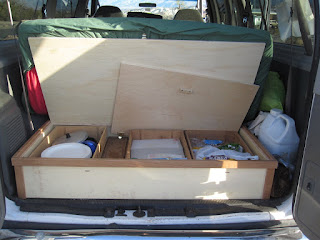 That night we camped at Rad Rock State Park outside of Ridgecrest, arriving just about dusk—dark enough that we couldn’t really see what there was to see.  But the van set up perfectly, we cooked our lasagna dinner on the table in the back and slept well in our new bed.  So far, so good.   That's the storage under the bed at right.

The next morning, we hiked a bit around the park, wishing we had more time, but we also were to meet a friend for brunch in Ridgecrest.  And it was during brunch that we decided that P really needed more than a few doses of Dayquil and Nyquil. A quick trip to the urgent care center in town, and a longer wait for Walgreens to fill the FOUR prescriptions, and we were on our way to Furnace Creek with a full diagnosis of ear infection, sinus infection, and bronchitis.  What fun! 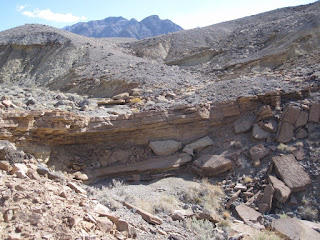 Doped up on meds, and feeling ever so slightly better, we decided to drive up to Hole-in-the-Wall and hike around the Red Amphitheater.  The van did great—handling the “only 4WD high clearance” road with aplomb.  And then we hiked around and looked at rocks, which is pretty much what you do at Death Valley.  There were amazing rocks here, and we loved the hike, lunch in the Amphitheater, and the hike and drive back out.  From there we went to the Visitors Center to ask a million questions, went back to camp to take a nap, had an early dinner, and went to bed.

P was determined to feel better the next day, and he did—a little bit.  This stuff was slow going. Since our campsite reservation was now over, we decided to move to Texas Springs Campground on the other side of the highway, which has a better view and is a bit quieter.  We drove around, saw that there were some free campsites, and decided to go see the Salt Creek Pupfish and allow a few more people to depart.  M loved seeing this little Darwinian mating dance a few years ago, but this year it hadn’t started yet.  So the pupfish were there, but they weren’t so entertaining.  Instead, we hiked out to the end of the boardwalk, and then down the stairs on the trail out along the creek for a mile or two.  By this time we lots of campsites to choose from at Texas Springs, and we picked the best of the lot for the next few days. 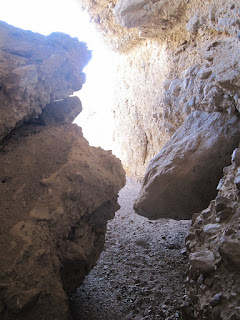 In the afternoon we took a tip from Steve Hall’s Panamint City website (highly recommended!) and hiked up to Foundry Canyon.  P had printed out a Google Earth map for this one, because for some reason, Steve’s GPS coordinates often don’t match up with our maps.  Some of the rangers noted the same issue, so be warned.  Foundry was lovely, but M was not feeling like climbing the first rather slick dry fall, and P only climbed up a bit beyond that.  On the way out P’s toe was bothering him, so he clipped an offending toenail to correct it.  And left the clippers on the perfectly sited white granite rock right at the entrance to the canyon.  Help yourself, if they are still there…sigh. With a few more hours in the day, we drove up to Death Valley Junction, where we had a coffee at the Amargosa Café, checked out the hotel and opera house, and then drove back to camp.  Despite the lazy day aspect of this one, we figured that we ended up hiking about eight miles, and were both feeling a bit stronger. 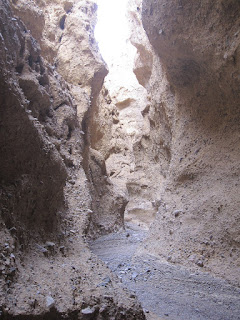 So the next day we tackled Funeral Slot Canyon, again c/o Steve Hall and Panamintcity.com.  This was a real treat.  The route starts right at our campsite in Texas Springs, and heads up a wash to a wonderful slot canyon with two side canyons also worth exploring. In one tiny side canyon we climbed as far as we could, to find a tiny water hole and plenty of evidence of Bighorn Sheep.  When we told the rangers about it later, they were unaware of the water there.  Beautiful Canyon and lots of fun.

And that night the stars were spectacular, with no moon and extremely dark skies.  P pulled out his binoculars and spent quite a while gazing at the Andromeda Galaxy, the Orion Nebula, and lots of other old friends up in the heavens.  Andromeda just about filled the whole field of view of his binoculars that night.  Stunning. 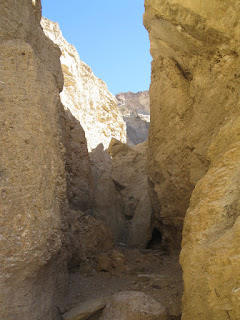 But that was a long day, and we chose to take it easier on the following day, going down to little Desolation Canyon to explore.  The wind was blowing a lot, and that didn’t help our sinuses or coughs, but we still had fun.  The NPS likes this canyon and gives good directions to it.  But we think they undersell it a little bit.  We must have hiked up six or seven of the side canyons, as well as all the way to the top of Desolation Canyon, and what was supposed to be a 1.8 mile hike took us most of a day!  M wanted a shower at that point, so we went back to camp and cleaned, P using the solar shower we bought for the van…which was not very warm.  Sigh.  And then a quick drive out to the Devil’s Golf Course before dinner topped off the day. 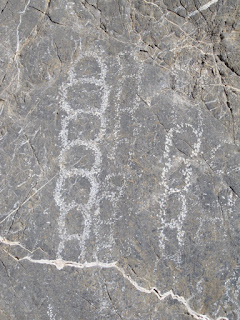 Each day we were feeling better, but both of us were still fighting a fairly nasty cough, which tended to terrify the tourists nearby.  To spare them, the next day we took the van to drive the 4wd recommended Titus Canyon Road—27 miles of it.  It’s a nice drive, and we enjoyed the ruins of Leadfield and the petroglyphs near the spring but driving that much on a gravel road isn’t all that entertaining.  We’d rather be hiking.  Le Vin did a marvelous job on the road, however.  And since we had plenty of time, we drove over to Stovepipe Wells to gas up and visit the Mesquite Dunes.  At that point it was almost lunchtime, and we were tired.  We decided to drive to Darwin Falls by Panamint Springs to eat lunch there, and then hiked in to see the falls. Both the hike and the falls exceeding our expectations…a lovely little oasis in this bleak desert. 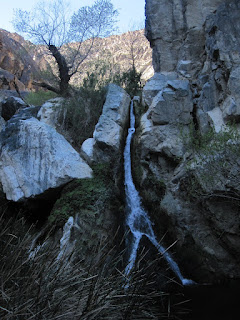 Did I mention we were tired?  At that point we looked at each other, looked at the van, and figured that we could be home by bedtime.  Off we went.  It didn’t quite work out that way.   We stopped to see the Trona Pinnacles in Trona.  We stopped for dinner in Bakersfield and got caught in a crazy traffic jam in Walnut Creek at 10:30 at night.  But we stumbled into our house at a bit after 11 and fell fast asleep.

Today we are exhausted, as well as we should be.  We’re resting, taking our meds, and enjoying soft beds.  But we’ve already made a list of places we want to visit the next time we go to Death Valley. 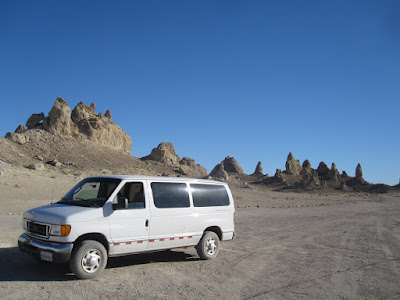 This is the time of year when I dream of the desert.  I will be missing DV but headed down to Palm Springs for some family busiess and R&R. Death Valley is best every other year or so.   I am thinking about a birding trip to southern Nevada once the migratory birds arrive around late March.

Glad you were able to enjoy it despite the flu coming along! Fantastic photos - its one of the places I missed on my tours of the west so need to get back out there (in non-flu season but before it gets too hot!).

The low desert is very liberating.  It is highly visual and lonely out there if you know the places to avoid.  The geology and the history are like an open book with little vegetation in the way.  Since water is so limiting, the threshold of the backcountry is right off the road.

Some people go to a place like DV and camp in a campground near the village with all of the development and complain about the crowds.  The secret to exploring the desert is to explore the dirt roads with a dependable vehicle and get out and walk around.  The amount of mining history can be amazing to see. It is easy to camp in a place where you cannot see one light at night, except for the Milky Way.  I like to be near DV sometimes but not in it.  Then we get to see things like wild donkeys and miliatry jets overhead.

The ground can be rocky for sleeping.  I like to bring a cot or even a piece of plywood in the back of the truck.    Bring lots of water as in 5 gallon jugs.  Day hikes are easy with the truck as the lifeline. Winter is by far the best time although there is less day light.  I like Feb best but avoid Washington's Birthday weekend.