Yesterday I attempted to do a much longer bike ride, but after having more difficulty than not I cut the ride short and returned home after spending the day cycling and walking my bike around Sunset Crater Volcano Nat. Monument 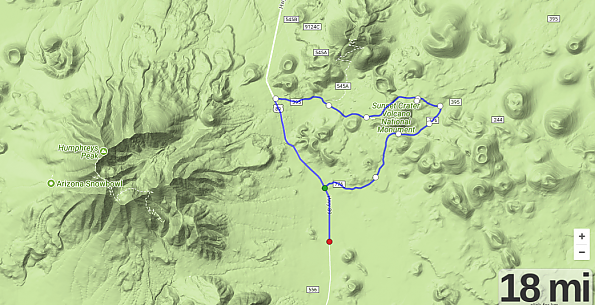 I began at the green dot after my friend dropped me and my bike off and rode NE along a forestry road to see the back south side of Sunset Crater. From the start the ride became hard as the limestone gravel the road was mad of was hard to ride with a loaded bike. I ended up walking more than ridi 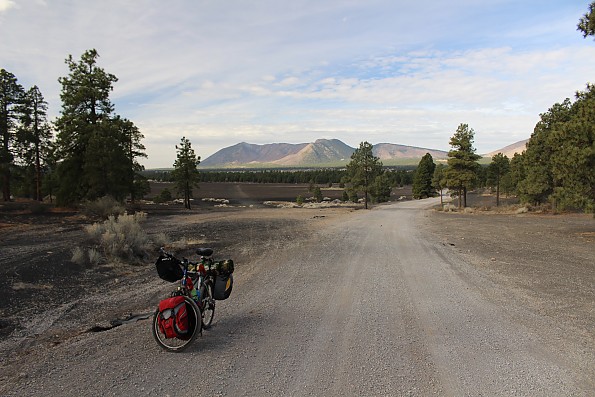 Looking back at Mt Elden 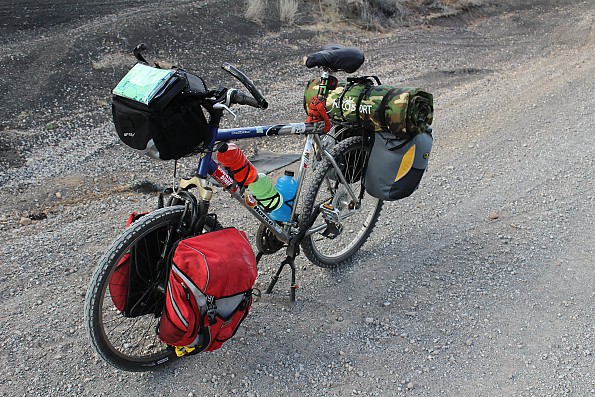 My loaded bike, weighed down so much even for a couple days ride was way to heavy to be comfortable. 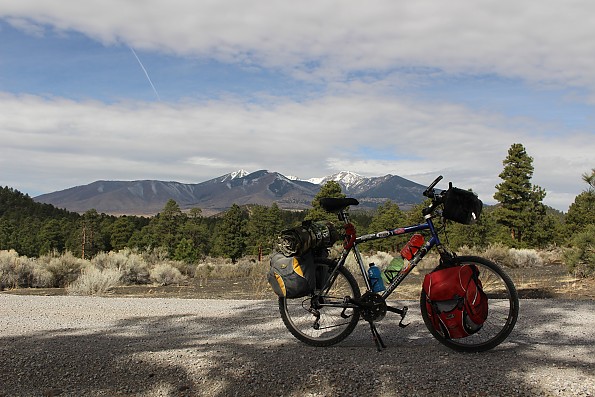 The San Francisco Peaks back to the west 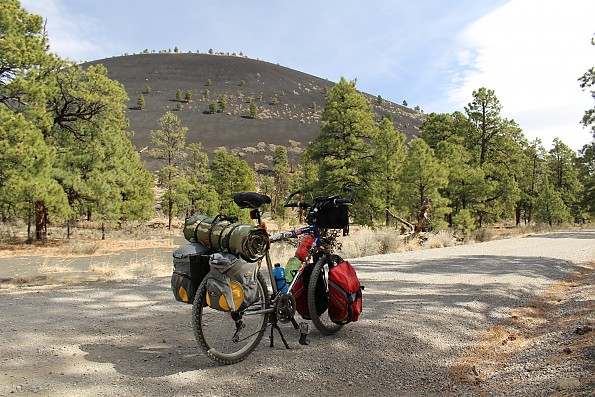 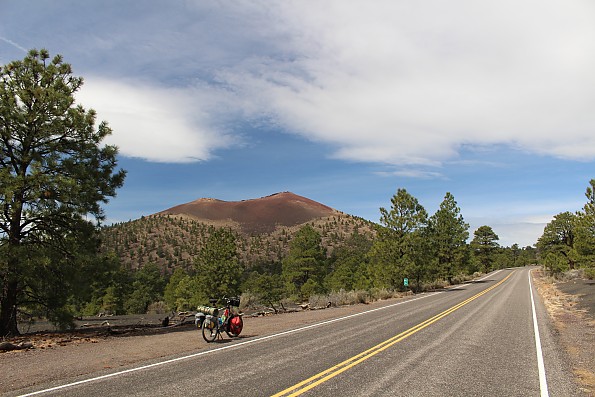 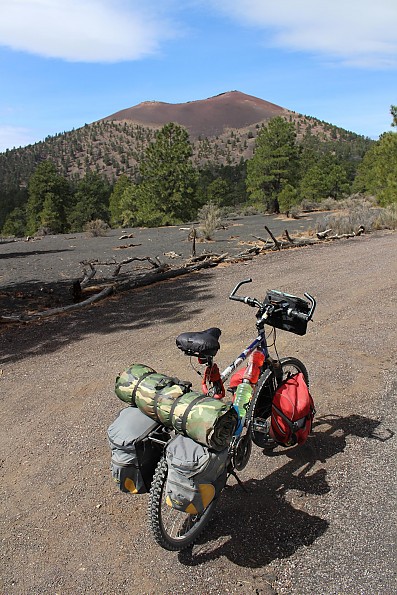 Such a beautiful peak, hard to imagine it erupted 900 years ago 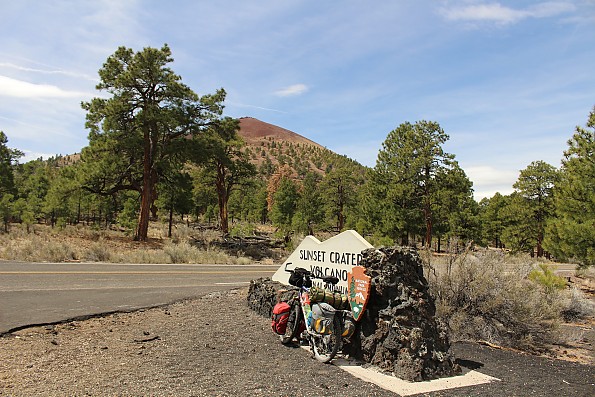 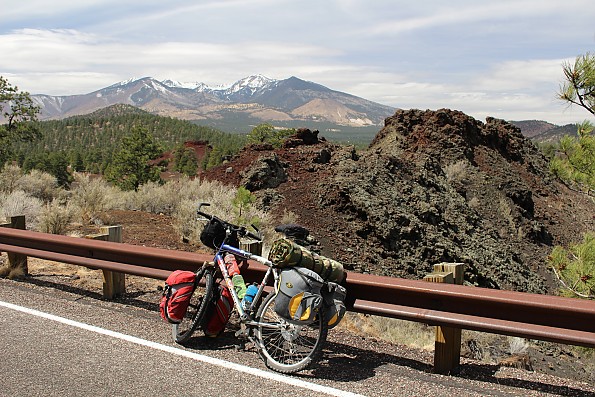 The Bonito Lava Field and the San Francisco Peaks 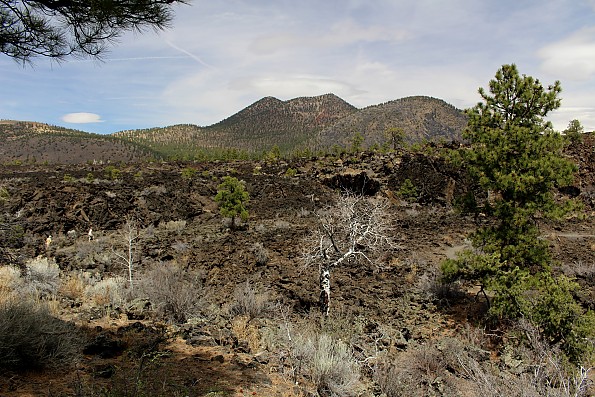 The Bonito Lava Field and Kendrick's Peak another old volcano to the north.

Sunset Crater erupted in around 1100 AD making it on the Continental USA the second most recent volcano to erupt after Mt St Helens.

The Indians who lived near by had to evacuate about 800 years ago abandoning their pueblo's where they live for perhaps 3000 years.

I am impressed with the condition of the road into Sunset Crater.  Much better than the state in the early 1960's, when it was first paved.

While certainly some people (those living in the immediate vicinity) would have been displaced by the eruption, the net effect was an increase in population, as folks swarmed in to take advantage of the moisture retaining properties of the volcanic ash. 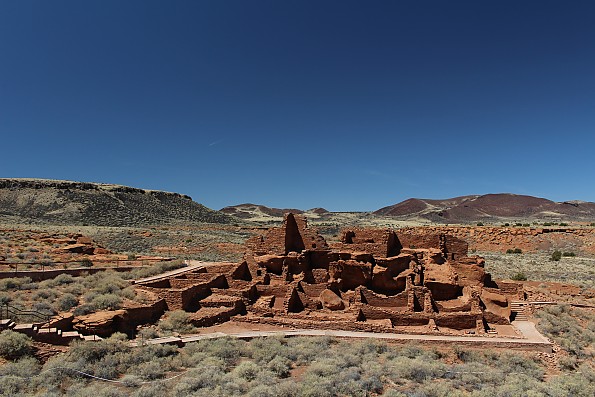 According to the Wupatki Nat Monument area which was downwind of the eruption most if not all of the so called Sinagua people who had lived in the area for 3000 years, all moved away leaving behind 100's of Pueblo's and other stone structures, about 800 years ago.

Interesting trip - that bike does look loaded down.  I always think of lighter gear being important for my old knees and ankles, and I guess it is similar for biking.

A major population influx began soon after the eruption of Sunset Crater in the 11th century (between 1040 and 1100), which blanketed the area with volcanic ash; this improved agricultural productivity and the soil's ability to retain water. By 1182, approximately 85 to 100 people lived at Wupatki Pueblo but by 1225, the site was permanently abandoned.

The above is from Wikipedia.  The park web site is less clear but gives the 1100-1250AD period as the time of peak population at Wupatki and the surrounding area.  That was certainly the story when i worked there in 1962-65.  Since then, knowledge of earlier occupations has increased over what was known in 1964.  Obviously anyone living near Sunset Crater was seriously inconvenienced by the eruptions.

I thought it interesting that there was no mention of any of the earth cracks in the monument.  The deepest, Sipapu Crack, is a 500 foot descent, straight down, and a challenging technical caving trip.

Phil May: I am going back to just the rear loaded bike, the extra weight on the front was just too much!

I am surprised we didn't see it, as we stopped at at all the Pueblo's.

The Sipapu Crack is just one of at least three on the Monument.   There are also "blowholes,"one of which is shown on the trail to the Ball Court, which show variations in air velocity and the immense interior volume responds to changes in air pressure.  they are all interconnected.

The park doesn't point out the Sipapu Crack, probably because it is a significant safety hazard - literally 500 feet straight down.

I was there in 2016 and met with an old friend that knows the archaeology of Publeoan People.  It is interesting that there is really no evidence of irrigation at Waputki.  The climate was wet enough for crop production in an average year.  We viewed a reclaimed burn in the Monument that was mostly recovered in a couple of months.  The summer monsoons really help the vegetation.

Later after viewing the monument, we spent some time on NF land viewing some sites that have not been excavated or cleaned up  Most of them were just low mounds of debris which did not look like much.  There were plenty of lithic remnants and pottery scherds in the vicinity of each of them.  The amount of unsurveyed sites is very impressive.

Volcanic ash can add a lot of nutrients to some soil profiles.  The loess in eastern Washington on the Palouse out near Spokane is one of the best known examples on a much larger scale.

This guy hiking Old Cave Crater explains what happened to the Sinagua people near the end of this video.