Details are in the videos. If you are claustrophobic, skip the second video.

March 2017 I was backpacking on the Ozark Trail along Hazel Creek. From the trail, I could see the bluffs bordering the north side of the creek. Staring at me was a dark hole at the bottom of a bluff.

Interested, I dropped my pack on the trail, waded across the knee deep creek and saw a potential cave lead. It was a low crawl entrance measuring roughly 28" high and 40" wide. 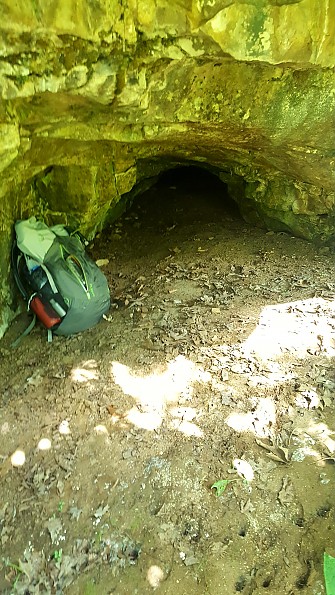 I got down and looked into the hole. It definitely went, but I didn't know for how far. Of course I wasn't carrying caving gear. So that was that.

When I got home a week later, I contacted a Missouri caver involved with the Missouri Speleological Survey (MSS) and asked him about the cave. The summary of the conversation went, "We don't have anything recorded in that area. We'll get someone out there to look at it."

Last week, I was planning on hiking in the area, and I asked him what became of that lead. The conversation went: "What lead?" "Oh, man, I forgot about that. We didn't send anyone to check it." "Hey, why don't you go check it for us?"

And here is the outcome... 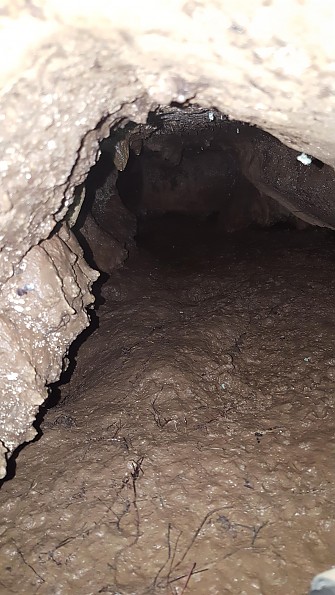 Now, I KNOW I can fit an 8" squeeze, but this would be on my side, not on my belly. And if there was no way to turn around, I'm not sure  I could back out of something that tight. So I let it go for now.

After I got back out of the Ozarks, I messaged the GPS coordinates and details to the president of the MSS. I won't bore you with all the details, but the end result was this message....

Think of a cave name, because this is a new one...nice find dude.

It's small. It's unremarkable. But it's my find. I go into the record books as credited with discovering it.

Now I just need to find a really tiny person to go back with me and push that squeeze!

I ignored your advice and watched the video. That is an interesting hobby you got there :p

YES. YES. YES. This is so fun to watch. Incredible to get to name it man, way to go. like putting up a new route on a rock face, its something that will be yours forever. Congrats man.

Well I had no idea you get caves, or rock climbing routes named after you! That is awesome although the video confirms I will never find a namesake myself. A big congrats!

i enjoyed watching your videos.

I know the feelings well! Many years ago I found a foxhole cave with a lenticular chamber just inside and a rockfall in the passage beyond. Came back with two companions and excavated the tunnel. It led to a live stream tunnel which disappeared down a sump after 500M. Cave divers investigated but found it didn't go but put a dye tracer in. This emerged 3 days later and 5 k distant