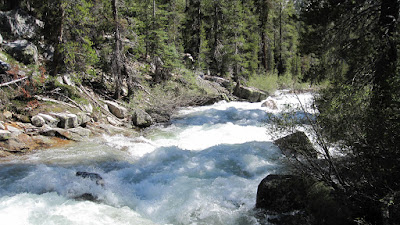 There are all kinds of wonderful quotes about adventure, epic voyages, and the need to keep pushing forward despite the conditions and the odds.  We haven't found quite so many quotes that urge common sense and caution in the face of danger.  And yet each year we read about people who lose their lives in the backcountry primarily because they just wouldn't admit that it was time to turn around.

(Note that despite these fatal accidents, it's still much safer to be hiking than driving in your car to the trailhead--or the local supermarket.)

And this got us thinking.  We have made the decision to turn around because we didn't like the option of pushing forward on a number of occasions.  Twice, that involved the potential crossing of a roaring creek;  Mono Creek towards Second Recess in early July, and Frog Creek Towards Laurel Lake in late May in Yosemite.  In both cases there was a log that provided at least a hope of getting across.  But it was a long crossing, the log was high across the creek, and to fall into the creek below would have been disastrous---it was at full flood.

And so we turned around, and selected another route, and another destination.

We did the same thing as we worked our way cross-country above Yellowhammer Lake in the Emigrant Wilderness.  The cliffs got steeper, the manzanita got denser, and we decided that there had to be another way.  There was. And we found it the next morning.

And just six weeks ago we did the same thing in the face of strong winds below Bishop Pass.  With the winds blowing a steady 30 mph and with gusts to 50 mph where we were, a full 1500 feet below the pass, we decided that we didn't want to make the effort.  Those we met on the trail who had come over the pass looked shell-shocked, to say the least.

And so we turned around, and chose another ending to our trip. In each case, we were really happy with the decision.  We love hiking, and seeing new things,  And we are really  that we are still here, still able to hike, and enjoying the benefits of turning around when it was the right thing to do.

So when have you turned around and given up on a route or a destination?

Great topic...with all the extreme adventure focus its good to bring this up. I have a few that come to mind...

Last winter, or maybe the one before, I was one day into a hike along the down into a gorge. Slipped on some muddy trail as I started my descent and tweaked my bad knee. Decided not to risk it and stayed on the rim the second night rather than do the climb in or out.

One trip years ago I completely reversed a loop hike after getting a few hours in and finding a raging stream crossing. With two dry days ahead I thought it would calm down, and it did, by the time I hit it from the other side. I had a bailout option as well with a bridge and a couple miles of road walking.

This year I abandoned some high route options on my two week walk across Scotland and pretty much stuck to glens and lower hills due to nagging injury to my old knee.

Being safe and making good decisions may disappoint your plans, but I look on the bright side...great excuses to go back again and schedule another trip!

I've cut trips short or changed route due to heat, cold, flood and slimy rocks. My bigger trips seem to be cursed by odd weather. Last Fall I had to get off the LT due to freakish heat while this year's attempt was called off at the last minute due to freakish cold. My first trip report here on TS told the tale of being turned back by a flood.

The slippery rocks were on an early season AT section here in ME after a wet spring. Had to call off a planned 15 day hike because everything was covered in a thin layer of slime from being constantly wet. The rocks that boots normally stick to were just as bad as the roots and mud. Fell down three times the first day including once while standing still talking to someone. Made it about half a mile on day two before I said "This is stupid dangerous" and turned around.

Totally agree with you about erring on the side of living to tell the tale balzaccom. There may have been a few times I would have been OK, but I'm pretty sure there were a few times I'd have been hurt or worse. Keeping all options open, including not going in the first place, making camp to wait for conditions to improve or heading home, is just the smart thing to do.

When you lose your fear, you are in big trouble.

The Voyagers used to say "no one ever died on a portage."

Hiking is dangerous enough.  Running a pack string or running rivers involves some extra risk, especially in remote country.   Always consider the experience level of your group, especiallly the weakest members.  Be willing to pull the plug.

On my last river trip on the Klamath River, my group had trouble due to low water,  with some bony rapids.  We beat up the equipment, but made it through.  We got to a good campsite near a road.  The hard rapids were ahead.  I made the decision to spend a couple of days camping there and not run the lower rapids.  I hitch hiked back to the truck. It was the right decision though an unpopular one.

The basins above Lake Edison seem to trap a number of folks with high water.  On a late spring solo trip a warm storm hit while I was up high.  It washed out bridges and made several crossing impossible.  I ended up making a thirty mile detour, which included a bruising slip and slide decent over brush choked hill sides with freshly exposed, slippery, snow flattened grass.  I was two days overdue and caused folks concern, but got out, nevertheless.

When we used to go on gonzo climbs and treks I insisted on a rule: anyone has veto power to halt the trip.  I have used it a couple of times, and folks got really pissed.  But years later they confided it was probably the right call.

Sometimes the option to turn back actually occurs before the trip.  Hiking into a big storm is a fool's errand, while other times some fools take on treks where the objective risks are substantial.  The one trip most responsible for me paring back on my mountaineering ambitions was a trek in the Cordillera Blanca range of Peru.  Our six man team was advancing to set up our third camp at 14K'.  Two would stay with a three day supply of food, while the rest of us would descend and return days later with more food and gear required for the summit push.  At least that was the plan.  Within minutes of us deciding where to position camp, the sky went from bluebird delightful to sinister and blowing. An unseasonable and fierce storm had us in its grip.  We ended up riding out the storm, quickly exhausting the six man days of food on hand.  On the 10th day some members of the party started getting frost damage on their feet, and it was decided we had to retreat while we still had use of our limbs.  We descended to the booming of avalanches, in whiteout conditions and gale force winds, exhausted to the point of collapse.  When we got off the mountain, the local authorities requested those who are still able, to assist them in rescuing other parties still on the mountain.  Everyone survived.  Nevertheless it was a horrible, frightful, experience that so traumatized me I fell into a depression that lasted six months.   Nowadays if there is a road to the top, I am driving! While turning back in the face of danger is a prudent, if not compulsory option, another lesson learned from all these tales of surviving disaster is survivors never give up.

I’ve turned around when I realized I wasn’t physically capable of summiting AND getting back down under my own power, or when continuing would mean descending a difficult trail in rain/snow or by headlamp in the dark. I have no problem at all hiking by headlamp - I love being out at night - but the last thing I want is for others to put themselves at risk on my behalf because I pushed myself too hard.

Always turn around if you see a sign that says:

Ed--have you posted a trip report about your trip to Peru?  We've been there twice, and would go back in a heartbeat.  We loved the Cordillera Blanca, but we also had pretty darn good weather for it--only a bit of rain on the third day, and that was after we made it over the highest pass.

Good wisdom here for sure!

This is from last year with Susan and we did turn back and find a better crossing:

Hmm, maybe it's worse than we thought:

We used to wade rivers and streams all the time as hydrologists. Use the rule of 10 to figure out if it is safe.  Depth in feet times velocity in feet per second should be under 10.  For crossing with a pack which we always carried, loosen the hip belt, put the pack on with only one strap.  We used to carry a rope.  I have waded a lot of chest deep rivers in Alaska, but you have to find the slack water.

Ed--have you posted a trip report about your trip to Peru?

Our trip was a climb, versus a trek.  Very technical, up in the snow and ice fields when we got stuck.  It was back in the mid 1980s, so no TR.  It was the same season that months later produced the North American El Nino that washed out all the piers on the California coast.