My wife and I (well, mostly I) built a 9-foot igloo up at Lomtjønna ("Loon Pond") about 4 km from our house up in Estenstadmarka, the city forest area out our back door. I sited it a little ways off of a groomed xc ski trail so that other locals could check it out and maybe use it.

I used the Icebox igloo tool that I've had since moving to Norway, given to me by one of my Vermont neighbors. The stars have to line up for me to get out there and build -- mainly plenty of snow and some time on my hands. We got about a half a meter of snow a while back and I used most of the ensuing couple of weeks to get some xc skiing in, so

I didn't get started until the snow had started to transform, making packing a little difficult. Put in a good 5 hours or so, mostly solo, on a Sunday to get through the first three courses, then kept pecking away at it over the next week, took the next weekend for some backcountry skiing, and finally finished it off last Thursday. Toward the end, where the blocks are overhanging, I was packing one block a day and then leaving it to set up, because the packing was so difficult.

We slept in it on Saturday night, with a little tour over nearby Liaåsen between dinner and bedtime. It wasn't too cold out and even warmer inside, but we found it a little damp and closed off from the outside world. I guess we could learn a little bit more about igloo living.

With better (excellent) building conditions it might be practical to build an igloo as a base camp, but for us it's mostly just for amusement, not very practical. Huts are a hell of a lot more comfortable -- and they have windows!

Here's an unsorted mix of photos, with my best night shot at the top. 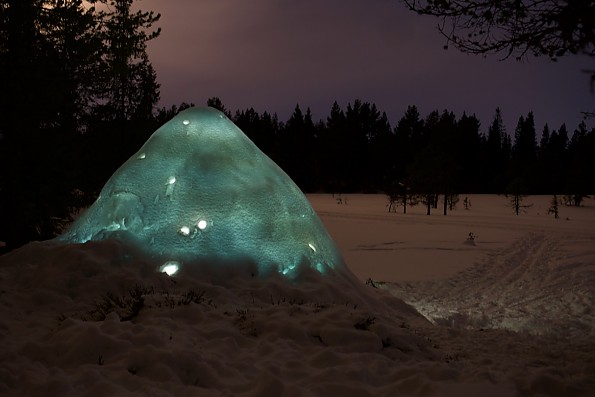 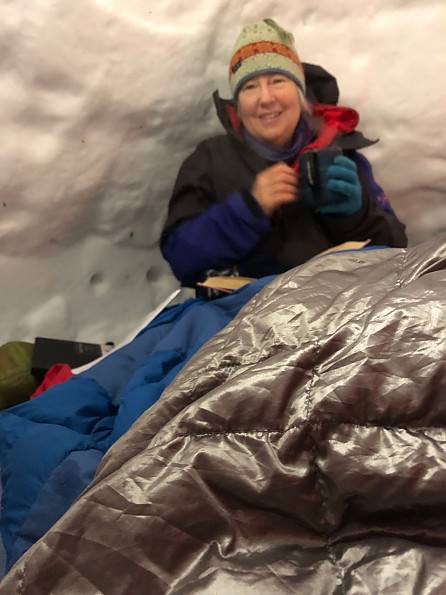 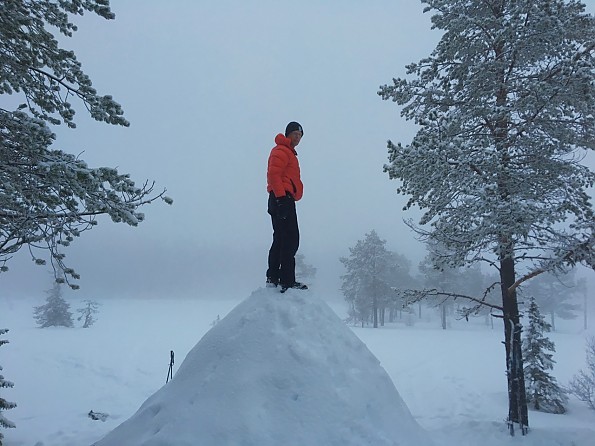 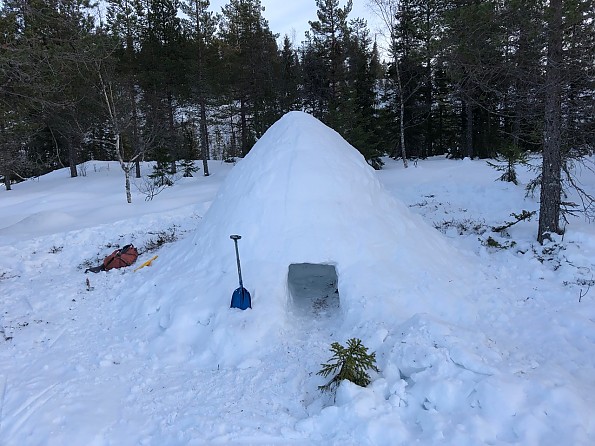 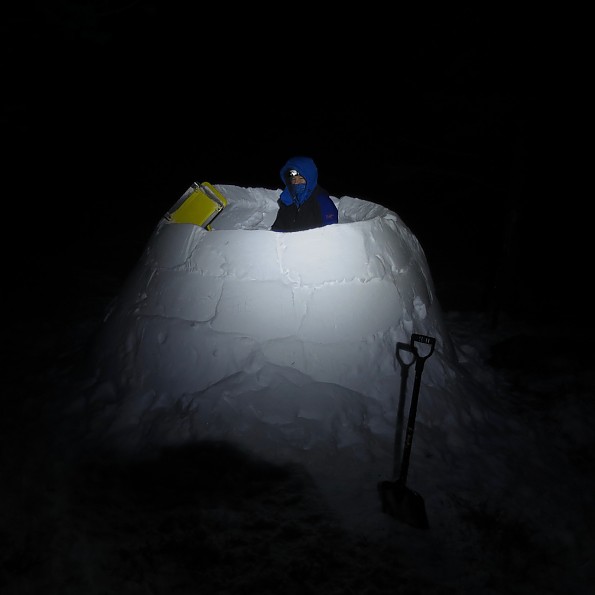 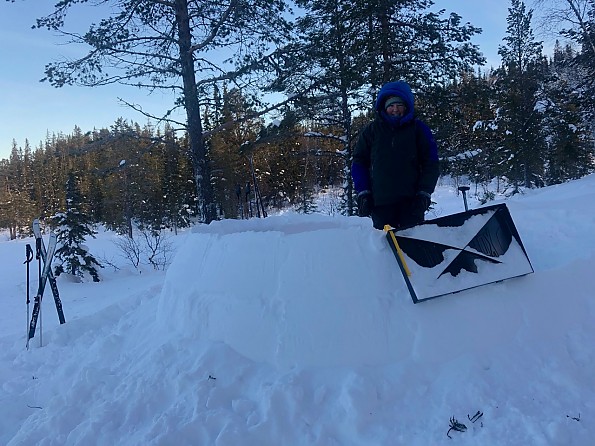 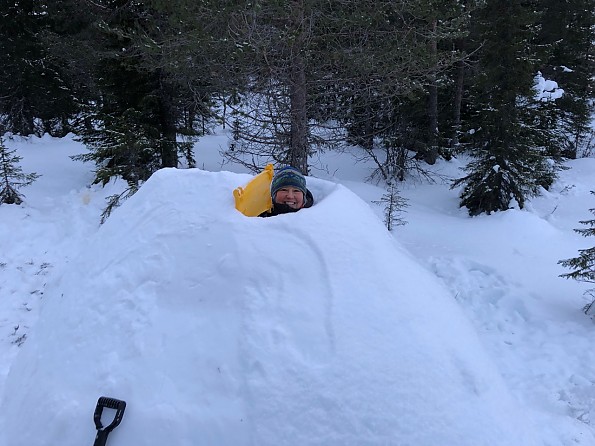 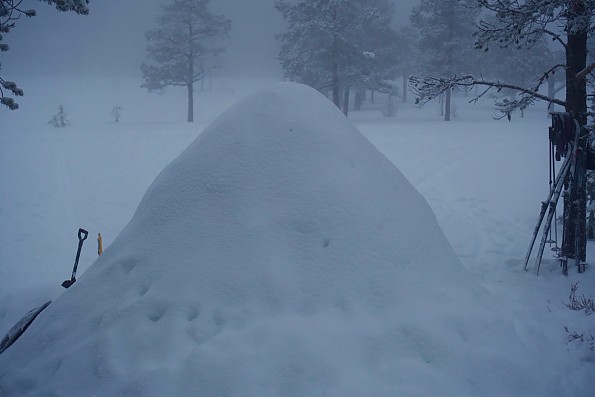 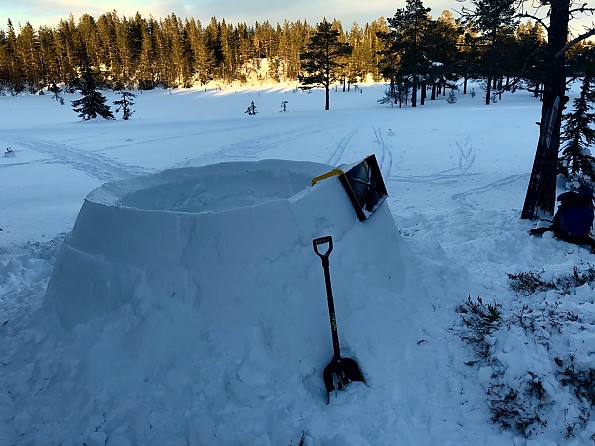 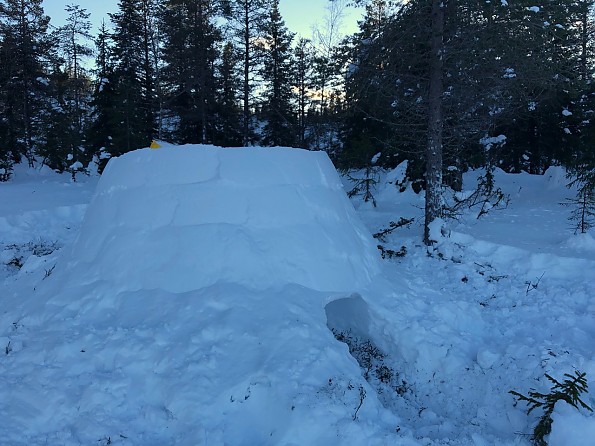 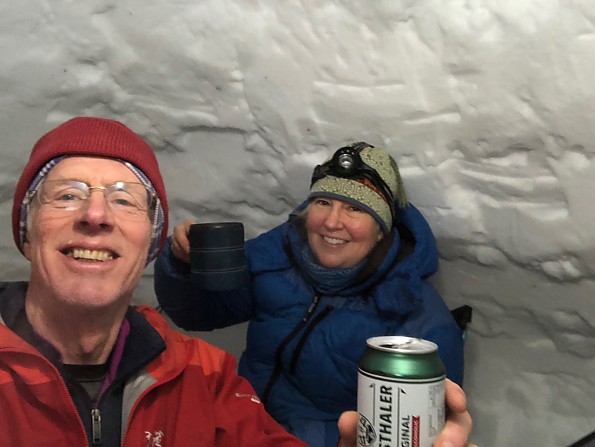 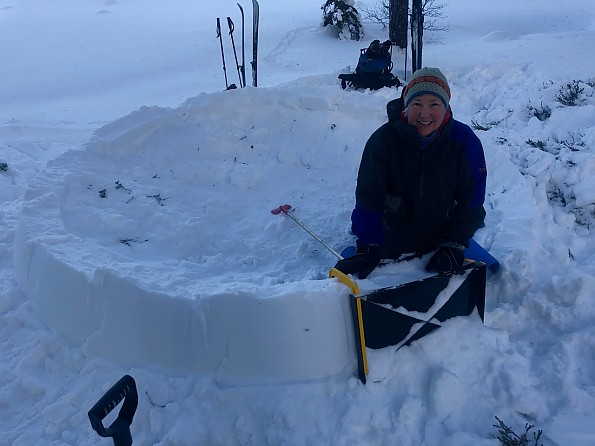 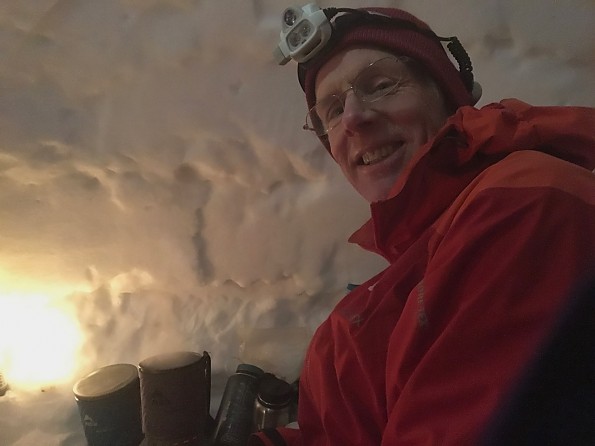 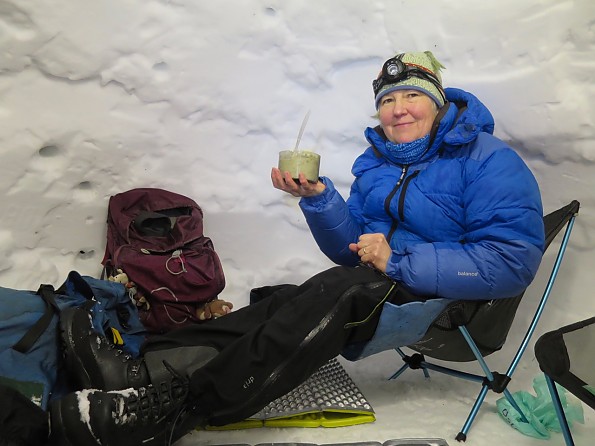 I found igloo construction to be an acquired skill.  Under the right conditions I can get one up in about 90 minutes.  I use the old school, snow saw technique.  A shallow snow pack is far from ideal.  Trying to build a igloo with only a .5M snow pack requires determination, as you have to fabricate practically all of the blocks from snow outside the footprint.  A deeper snow pack affords making the top half of the shelter from snow inside the shelter perimeter, cutting down the effort expended to place the blocks as well as reducing the number of blocks required, since pulling blocks from the shelter floor adds head room as you dig deeper.

I was curious: I noticed Nancy was bundled up, what were the temps inside/outside the igloo?

She's always bundled up more than me. I was maybe -3C outside and a little above freezing inside. I wore a wool underlayer, pile vest, and shell most of the time.

Good job.  As kids we built snow forts because we had not yet learned about igloo construction.  Around 1960 we had some big drifts that lasted for months and used sheetrock from a nearby contstuction site for the roof.  We had three rooms that were all connected and had the whole neighborhood in there.  Warmer than people think.

Thanks for sharing this, BigRed! Both of my kids have enjoyed making snow shelters of various types.

I wasn't familiar with Icebox, so thanks for sharing them. How do you like the Igloo Tool? How well has it worked out for you in different snow conditions?

If my memory serves me, the guy who invented the Icebox is a member of the Trailspace community.  He goes by IglooEd in social media.

If my memory serves me, the guy who invented the Icebox is a member of the Trailspace community.  He goes by IglooEd in social media.

Ah ha! You are right, Ed. Thanks! I'll send him a message to point out this thread.

One word, BigRed, one word...MAUI!

Heh, no need to send Alicia, I get the weekly report and...

How cold was it Big Red? Glad to see you building an igloo and it does take some learning to live in them. I used snowcaves for many years and spent a couple or few years adapting my methods when I started iglooing.

Heh, no need to send Alicia, I get the weekly report and...

Had been wanting/trying to build an igloo since I was a kid in New England, so finally bought an IceBox tool ~3 yrs ago.  It surely does work, esp. if you carefully follow the instructions for packing, but building an igloo is still a lot of work, at least for me.  I've completed one 7-ft igloo and two other half- to 2/3-built 8-footers using mostly drier powdery snow in Rocky Mtn west (takes a long time to pack and wait for it to set up).  So much easier if you have at least 2 people to work on it, but my assistants did not stay with me to finish, I ran out of time, or it warmed up too much.  Still haven't slept in an igloo.  Would love to build another where cold enough to last a few months, do a few ski trip overnighters to it, and make all that work worthwhile.

I sent you a message on the Grand Shelters web site -- I think I need a replacement inner panel because the slot that the yellow u-bar slides through ripped out...

As I think I said above, it was only -3C or so the night we slept in it, but I did most of the building under colder conditions, down to -12C or so, that would be down in the low teens F.

My experience jives with yours. Over the years I have completed 4 igloos + 2 or 3 incomplete, most in the 8-9 foot range. On most of them I've worked mainly solo -- it's hard to find good help these days. So it takes a long time and often the snow is less than ideal, and since I build so rarely I don't remember all the lessons learned. The angle of the first row seems to be critical and can be hard to get right. I've been thinking of cutting a couple wooden wedges to try to be more precise with that next time around. And as indicated in the manual you have to experiment with packing the snow to try to find the right amount of pressure to get it to sinter.

In my dreams I've already built an 11 foot base camp igloo to share with friends up in some gorgeous Norwegian valley surrounded by peaks just begging to be skied. But given the amount of time and effort it takes to build and that many Norwegian valleys have roomy and comfy huts in them (for a price), it's an easy decision when it comes to how I want to spend my weekend and vacation time (and money).

But it's still fun to build an igloo once in a while and sleep out in it, even if it is just up in the city forest.

Now we're getting a major thaw so we'll see how it holds up.

This makes me happy. Thanks for sharing!

Did you smooth out the block lines on the outside? If so why?

It does take experience to be fast at building them. My partner and I used to build the 8ft. two man igloo in 1:40 to 2:40 depending on the snow conditions.

I have an experienced friend and we build a 9ft. in four hours with sugar snow but not the worst of snows.

I have built a 7ft. in two hours solo with the best of snow. Typically, I extend the pole on the 7 ft. and it builds a short 7' 11" igloo. I generally take my time building them and they can take up 6 hours to build.

I try to help people and teach them the feeling of packing the snow but alas, I can't be everywhere. It does sound as if you have the feeling down but maybe you still need to be a little more careful. It's best to be overly careful and get rougher/faster once you get it figured out. I have religiously moved the form as soon as the block is packed for many years. I've had friends say "let it set for a minute" but I then tell them to do their job right when rounding up the snow and putting it into the form. I let a few blocks break and they soon see the need to learn. Then we are off and running. School of hard knocks.

For the tip angle of the first row, look at what you think is correct from above while packing and then check it after building the block by standing back and to look at the line before removing the form. Correct the tip on your next block while looking at if from above again. Check it again by standing back. Eventually you'll have the right perspective from above.

We do have an updated manual if you don't already have it. It's on the web page for download or just viewing.

I don't think I received your email about parts. I did receive one from Norway but I don't think it is you? Let me know.

I'll just add here that those of you who've used the Icebox igloo tool, or anything similar, are welcome to review it on Trailspace: https://www.trailspace.com/gear/write-review/

I'd probably end up categorizing it under Tent and Shelter accessories.

We did not smooth out the outside, some fresh snow took care of that. We got 15-20 cm up there before the thaw weather set in. I went up and hand packed it to add another layer to the outside walls. Withe more time I could see smoothing the inside walls just to make the living space tidier, but then whatever snow came off of them would probably have to go out the door. I'd like to get my hands on a circle or two of clear plastic and put in some windows.

You sure the email from Norway wasn't from me, Rick Strimbeck. I can take a picture or two of the damaged panel and get them to you one way or another.

Rick, It was a different person. I've emailed you via the one listed in your profile.