We were stunned to see this particular RV in a Page, Arizona Campground, overlooking the red sandstone and sky blue waters of Lake Powell.  Yes, this is a camper who has rigged a video projector to his RV so that he and his kids can watch movies instead of look at the stars.  Which makes you wonder why they don't just stay home and do the same thing.  Amazing. 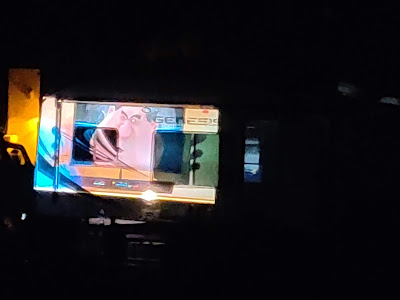 I'm not even a fan of those big RVs, as most folks who recreate in that mode never get far from the hookup.  But that's for another thread.

If it gets the kids out there I am for it, within reason.  It'd be nice to get them interested in star gazing (I've never been a big fan of that - I've always liked to stare at a fire) or other outdoors stuff.  But there are many different activities, and most kids as well as adults don't embrace all of them.  I've got friends who hit the hay shortly after dinner, much to my chagrin, foregoing the evening of fireside comradeship altogether.  But with kids you may entice them to try new experiences.  So you bait the campfire with s'mores, if that gets them around the camp fire, and you create games for on-trail if it gets them to hike..  ..and bring videos if it placates the evening.  The whole object is to do what you can to get them out there, where hopefully, bit by bit, they cultivate an interest in camping and nature.

My concern in this context isn't dad's choice of entertainment, it is the degree it may intrude on nearby campers.  A big screen or projector can be a huge illumination eyesore for anyone nearby.  The worst example of this are those monster truck guys with the loud CW music, and high intensity LED light bar on the PU cab, set on high beam to light his camp for the evening - and everyone else's camp within  100 yards.  And don't get me started on folks who run generators into the night or decide 11pm is a fine time to spit firewood.  I feel better, now, that I am all snarked out...

I just met up with a group of friends in the wine country of the Sierra Foothills at an RV park.   We had a great time, but the park was terrible.  I could not wait to leave.  Now I am home enjoying the gorgeous beauty of my home place.  I took a range walk this morning.