Did another fine trip to Joshua Tree, over the weekend leading up to Thanksgiving.  The landscape was drier than ever!  We camp in the high part of the park.  The only plants that didn’t appear stressed were the barrel cacti, Echinocactus polycephalus.  Particularly hard hit were the beaver tail cacti Opuntia basilaris, Opuntia chlorotica and Opuntia phaeacantha.  I have witnessed some of these beaver tail cacti specimens grow from single pad small fry over the prior 36 years, only to stress and completely die off in the last 5 years.  The Joshua Trees are losing crown mass, many dying off, with insignificant numbers of new Joshua plants replacing the dead ones.  Even the mistletoe is dying off, yet in many instances their hosts are still eking it out.   The creosote and other chaparral are putting out minimal but otherwise healthy growth and does not look diseased.  We had some bats around our camp, saw and heard a few small birds, and detected signs of predators digging up burrows, but otherwise saw nor heard any other fauna, particularly the owls that have patrolled the nearby ravines for decades. 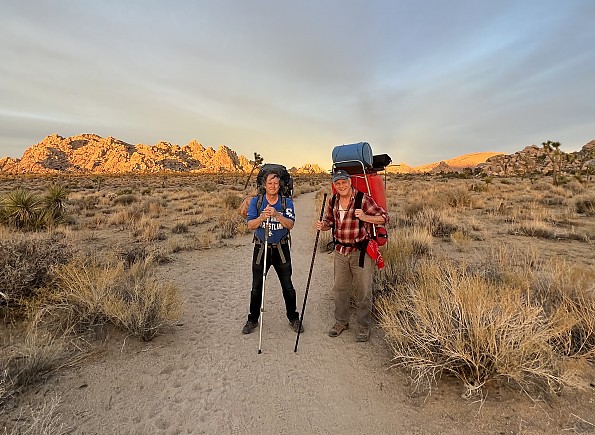 Above: Old college friend, Eric, and I, as we take in a very beautiful Josh sunset.  This vista has only 10% the number of Joshua Trees that once dotted the area 35 years ago.

Above: Compare this image  taken six years ago at the same time of year to the prior image.  Both are from the same area.  Compare the dramatic difference in the number of Joshua Trees and the density of the chaparral.

Above: Trudging XC on the last mile to our camp.  As the terrain alludes, it is unlikely others will discover our camp.

Above: We got to camp, right as the sun set over the horizon.

Above: Prepping the first night's dinner.  Since each person must carry 20 + pounds water for a 3 day stay at our dry camp, and the moisture in fresh food counts, we eat quite well at our Josh camp.

Above:  Moroccan spiced shish kabobs.  A middle eastern style dipping sauce of yogurt and herbs accompanied the kabobs.  The next evening we enjoyed roasted chicken tacos with pico de gallo sauce and avocados.

You know how to eat.  Absolutely makes sense to bring hydrated fresh food in the desert.

The recent droughts have stressed everything over a period of two years.   We just got some rain here in Nevada, and I can see the response already.  The big sage is already grey-green again.  The bitterbrush are putting out new leaves.  There is a flush of annuals.  More to come in the next few days and weeks.  Big storm aimed at the Sierra.

I am focusing more on spring and fall, but like to spend time in the desert in winter.

Me bad.
Desert shrub, and desert scrub, indeed, are the proper terminologies for high desert flora.

I Looked up chaparral in the dictionary.  The term identifies a landscape of short, evergreen oak shrub thickets, growing where summers are dry, winters wet.  Chaparral in So Cal is typically xerophyte flora (given to a shallow root system) but that is not always the case.  SO Cal has shallow rooted chaparral in the in-land valleys and coast facing slopes of the foothills fronting the local mountains, but So Cal also has a deeper rooted Chaparral, known as soft chaparral, coastal sage scrub, or CSS.  This variation of chaparral can be found in micro ecologies, places like the Laguna Hills, terrain adjacent to tidal lagoons and marshes, as well as in the deep ravines of interior facing aspects of the foothills adjacent to the mountains.

Nice post.  Fifty years ago I climbed around the hills in So Cal for a living and  worked around chapparal.   I have not seen much of it since.

I live in the Sagebrush Ocean, but the pinon/juniper communities start about a mile from my house.  On the other side of the Valley about 6 miles away is the Jeffrey pine community and the mixed conifers are a few thousand feet above that.

As some may recall I lived in Riverside for 6 months in 2011, enough time to learn something about SoCal vegetation, but I wouldn't claim any real expertise. Our rental house was at the base of Box Springs Mountain and that was my main playground for morning runs. There the veg is an inland variation of CSS, with many of the same shrub and wildflower species and a few others mixed in. We also had the opportunity to get out to coast, Sierras, and CA-AZ-UT deserts. When we left Riverside at the end of the 6 mos., we took a 3 week "California camping tour" with some Dutch friends that also live in Trondheim, giving us a little time in many of CAs world-class national and state parks and forests. And we had another month+ in CA when we did the JMT in 2014. Lots of find memories and photos of everything from rocks and wildflowers and elephant seals to coast, mountain, and desert landscapes.

For anyone wishing to delve deeper into SoCal vegetation I can recommend the book "Introduction to the Plant Life of Southern California" byy Rundel and Gustafson, UC Press. It's not just a list of plants, but goes deep into the climate and other processes that make the veg what it is. Includes a chapter on "Coastal and Interior Sage Scrub", others covering various types of chapparal, the Channel Islands, woodlands and wetlands, even invasive species. Good book!

How much water were you carrying?

I have had some great overnight trips in Big Bend, Death Valley and the Pine Nut Range behind the house.  Water is hard to find.