This will be a very abbreviated report as I just want to show a Trailspace member I ran into while I was backpacking the Citico/Slickrock wilderness in NC/TN. In 15 days I got snow for 4 or 5 of those days but when I saw pburse it was nice. Pburse and friends below: 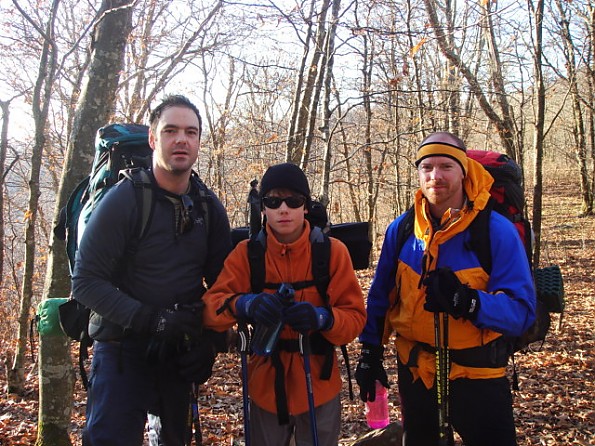 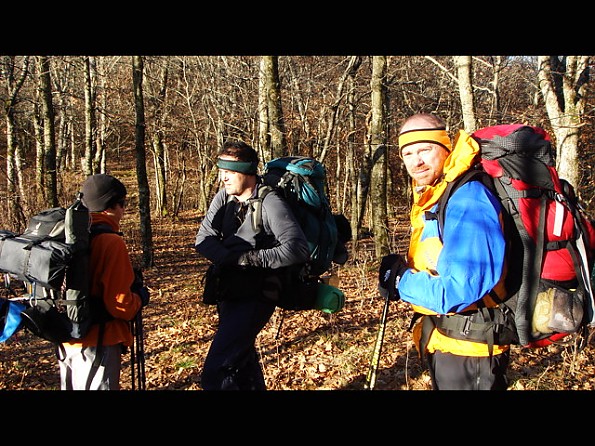 And here I am in paradise again. Check out the nice Icefall parka. Overkill for the mountains of NC? Not quite. 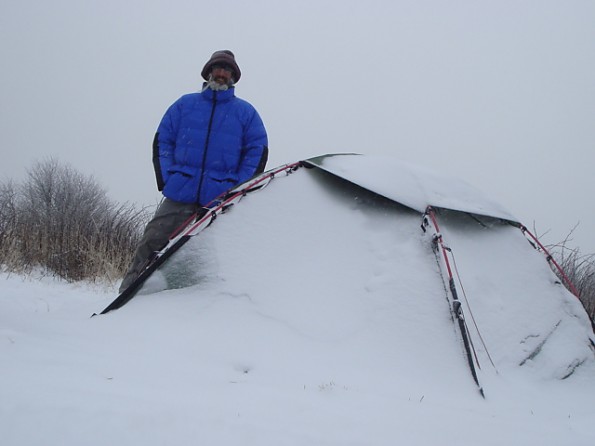 What a motley crew... you're liable to run across all manner of ruffians out in the woods, no? Wish i hadn't seen that Icefall in the flesh.... coveting is a sin I know? Great to met you! sorry our schedule hurried us along the trail so soon. Concerning the clear-cut on the spur; talked with some similarly concerned compatriots from knoxville and learned what i could from them (they've raised a significant amount of fuss about this thru every available channels). Also talked with FS office in Asheville. It's absolutely impossible to determine the WHY of what happened. A real convoluted fiasco, to say the least. Conflicting statements from the FS office when compared with the ranger station in Robbinsville. The answers to the riddle have been lost in the bureaucracy.... what else is new? Anyhoo, what's done is done and can't be undone. I am having conversations with the R'ville office to see if a reforestation project can be initiated - which initially, as i understand had been ruled out by the Asheville office (how absurd is that). All the ins and outs are a little much to post here. I'll let you know how that goes.

I might of been the first backpacker with a camera up on the Hangover right after the clearcut(November 2007), and so I immediately took the necessary fotogs and when I got back I emailed the Knoxville Sierra Club Harvey Broome group with the distrubing pics and let them take over.

And then John Quillen of the SOUTHERN HIGHLANDERS.com took up the fight and he actually interviewed the woman ranger supervisor in Robbinsville. Go to him for more info. His website has a section on the Hangover Clearcut. Here are some of my fotogs of that dreary November 2007 day: 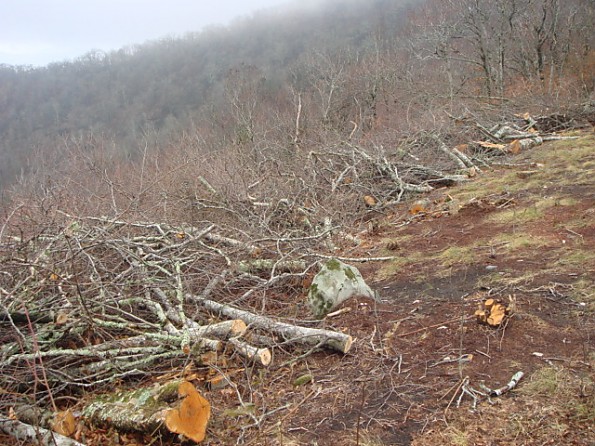 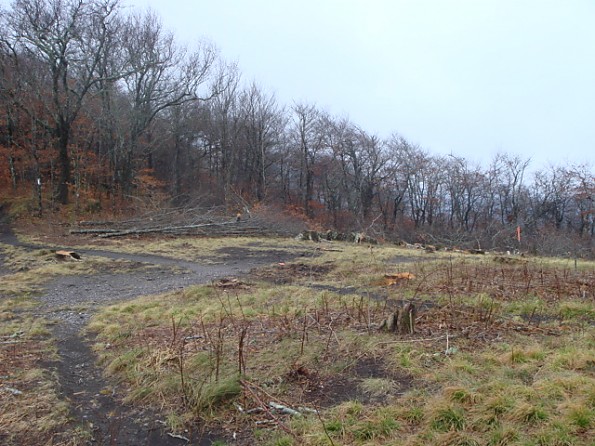 The worst part about the whole thing is that it happened inside a designated wilderness area. Sob.

I was out Thanksgiving. I was camped on the Bob and saw pburse and crew as they passed through on their first day. It was windy that night before and the sky told me to leave the Bob and go down to Swan Cabin road and camp near the water. They told me that Tipi was supposed to up here somewhere - I just missed you on that trip.

Unrelated news - Jan 02 there was two guys and a husky named yukon camped where I saw you with the Keron3. They built a new firepit right where your tent site was that night and burned a cord of wood. They had walked in from the Bald River road and the next day when the snow started and the temps were cold I was at the bottom of Brookshire and saw them drive past. your site has been desicrated.

Hey Hootyhoo! We just missed each other again as I went out on New Year's Eve for another 15 day trip and came back on January 14 and Man, it was a butt cold time! I saw the dog Yukon and I saw their pitiful camp with the firepit right on my favorite tentsite. About 20 feet away was the regular firepit with rocks and everything. Talk about LNT, they couldn't be bothered with using the established fire circle. Here's three pictures of their firepit, their dog, and their Mt Hardwear Trango tent: 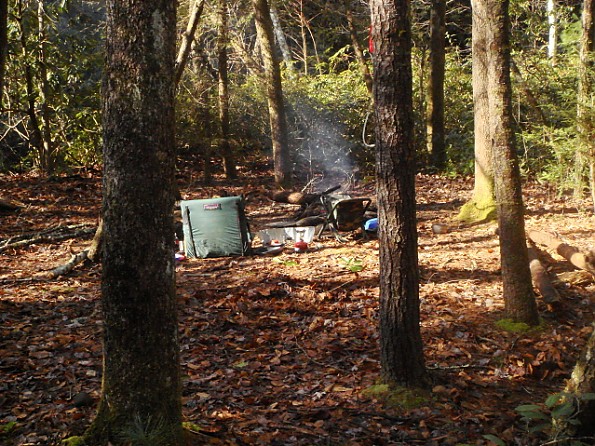 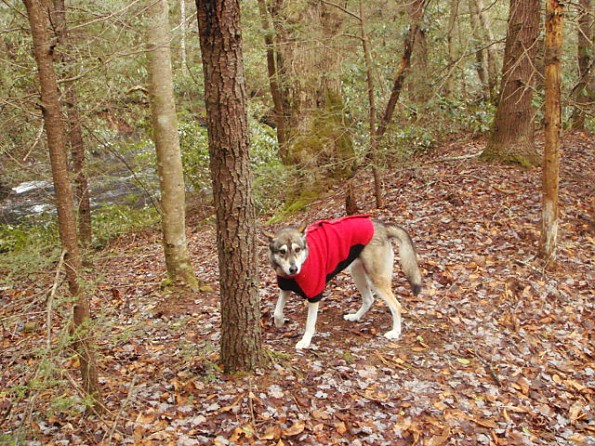 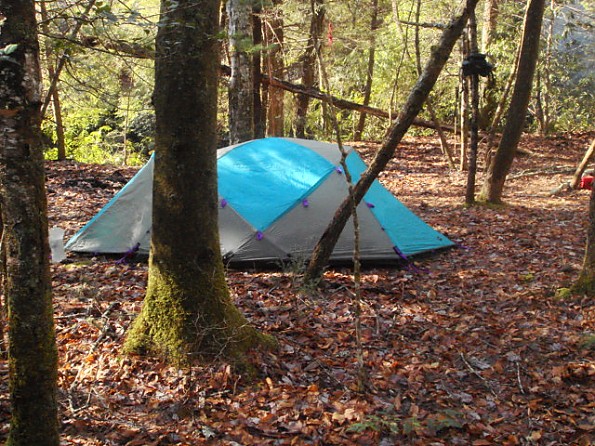 Making the new firepit is very strange. I have used, and rebuilt many existing firepits, and even made one when there wasn't one- but ALWAYS in the most unobtrusive, least destructive manner. Even pragmatically, why would you even make a second, new pit when there was already one there? That's just more work!

That is a Room With a View 2, not a Trango. I used to have the same tent and I asked him if that's what it was as I passed through there - that was the extent of our conversation. Oh, and he asked me where I was headed. A couple of days later when I passed back through there I checked that tent site - it was nothing but roots where that MH tent was set up - so I guess they built the fire on the soft, level spot and set the tent up on top of tree roots. On a positive note there should be some more area opened up now that all that wood has been burned.

What state is this in? 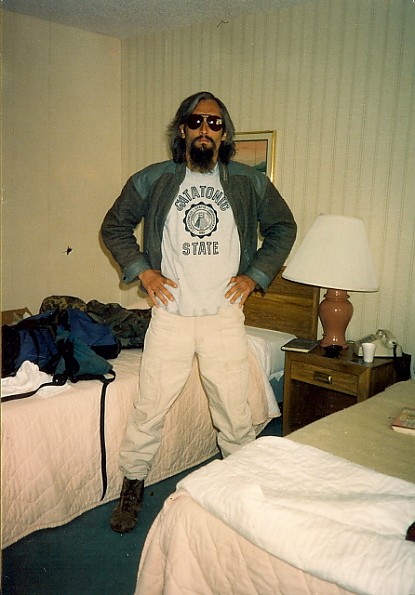 A proud student of Catatonic State. Ha ha ha. Just kidding. I was in the proud state of Tennessee(and a bit in North Carolina). Citico Creek and Slickrock Creek wilderness. The red dog fotogs were taken in the Bald River Gorge wilderness area in TN.