Okay, I just got back from an 11 day backpacking trip in the mountains of Tennessee and spent 8 days of the trip on the Benton MacKaye trail as it winds thru the Citico and Brushy Ridge wilderness. Here's some pics(April 16-26 2010): 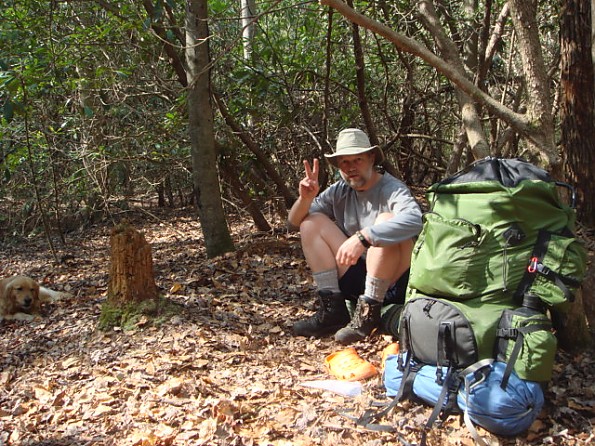 On my first day out I run into old backpacking buddy Hootyhoo pulling a four day hike along the South Fork and the Pine Ridge trails. He stops into my camp and decides to set up nearby for a night. 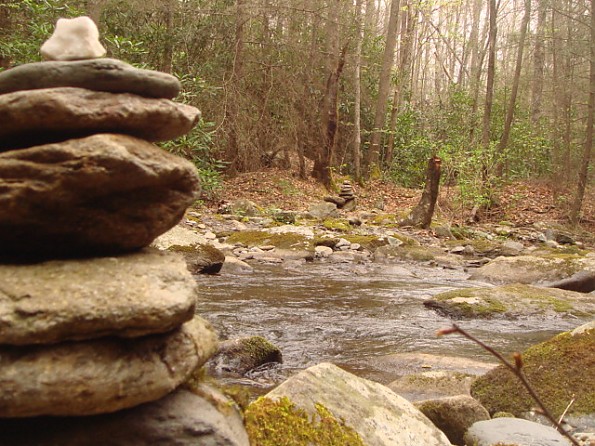 Hippie sign is heavy on the North Fork Citico trail this time of year. On the other side of the creek is another rock cairn. I found about 7 total on the NF trail. 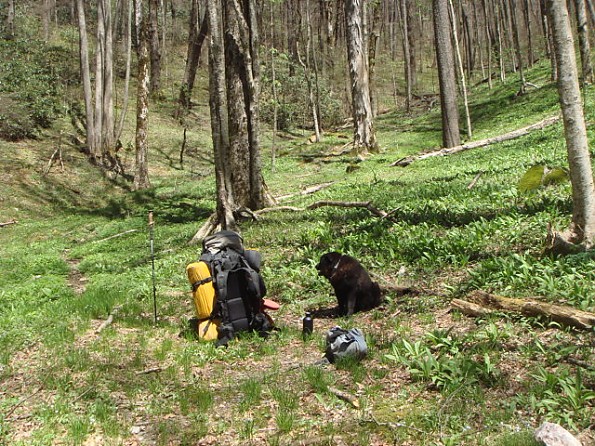 The North Fork is a rugged trail and steep in places, but as you reach the top at around 4,000 feet you get out of the rhodo and reach this nice little green open bowl. I always like to take a break here and hang out. 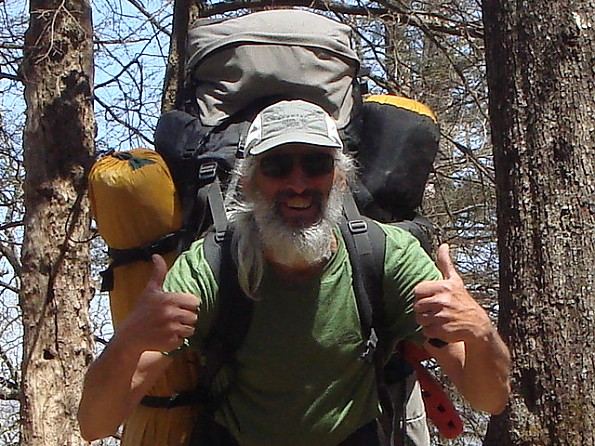 I give a big thumbs up after pulling the 3,000 foot climb with an 80lb pack. Why so large? Cuz I'm planning on doing a 20 day trip and still have most of my winter gear(including around 4 books). Yikes. 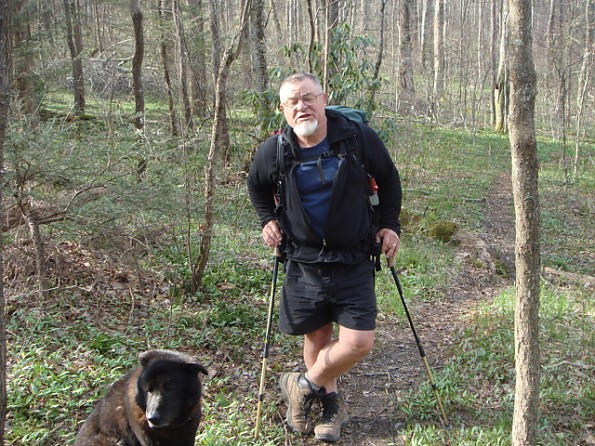 Climbing the North Fork trail put me on the BMT where I camped and backpacked for the next 8 days. On Day 3 of the trip I run into Superman. He started at Springer and will pull the BMT to Davenport Gap and then continue on the AT until he's finished sometime in October. This would be his second thruhike of the Appalachian Trail(BMT). 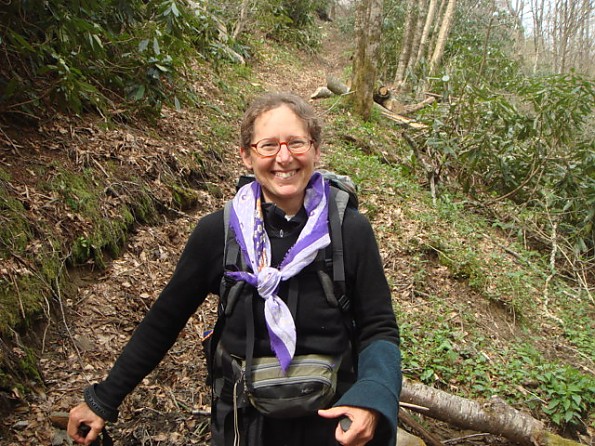 As I backpack down the BMT and go south on Day 4, I run into three-time repeat thruhiker named Mssnglnk(Regina)and we jaw for 30 minutes along the trail. She has her trip reports on Trail Journals.com. 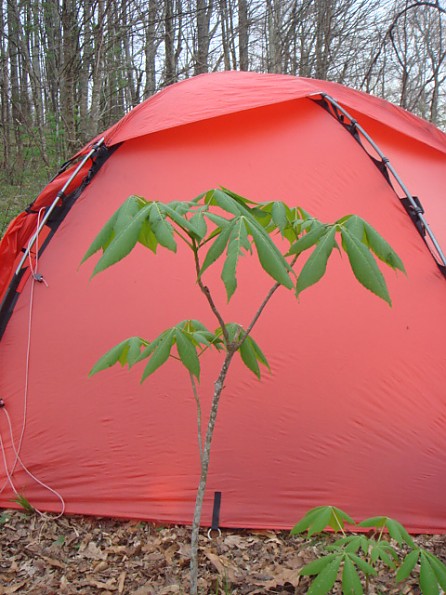 I spend two days at this spot in the rain but get this neat fotog of red and green. 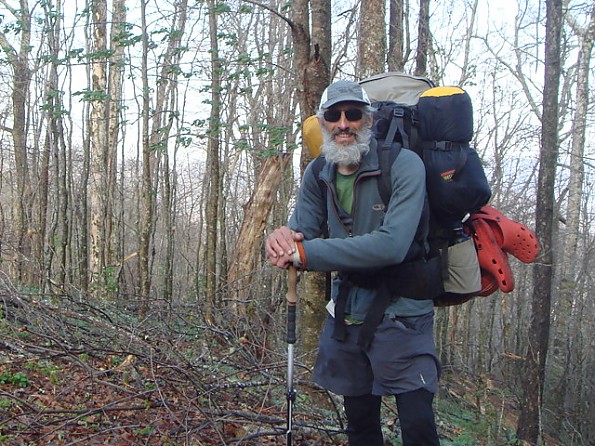 On Day 6 I leave the Citico and enter the Brushy Ridge area and the high ground of Whiggs Meadow. Here I am at Cold Spring Gap with the standard long-trip load. 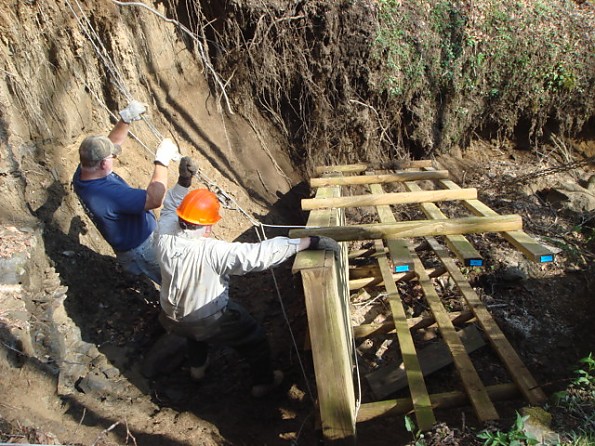 At Beech Gap I run into 6 Georgia trailworkers from the BMTA using 3 come-alongs to haul out the collapsed footbridge across a newly eroded part of the trail. 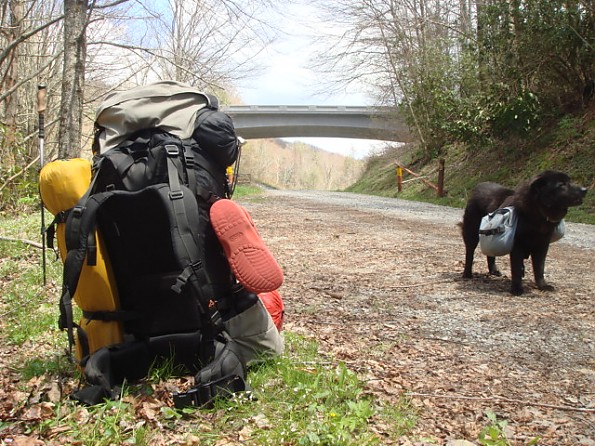 Here's where the BMT crosses the North River road and passes near the Skyway parkway at Strattons Meadows. This is one of my favorite fotogs of the trip. 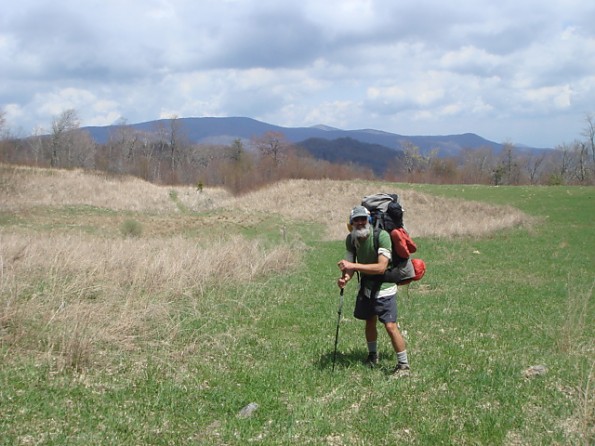 Here the trail passes thru the Rock Quarry and you get a good view of Bob Bald and the Hangover and Four Mile Ridge in the background. 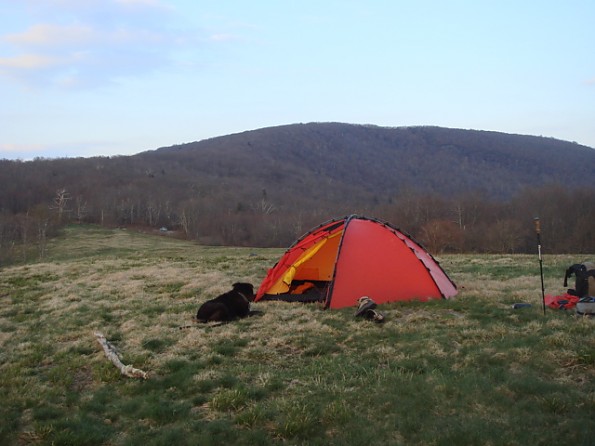 After a 7 mile day I get to Whiggs Meadow(at 5,000 feet)and set up the red Hilleberg for another night on the trail. Behind me is mighty Haw Mountain at 5,500 feet. 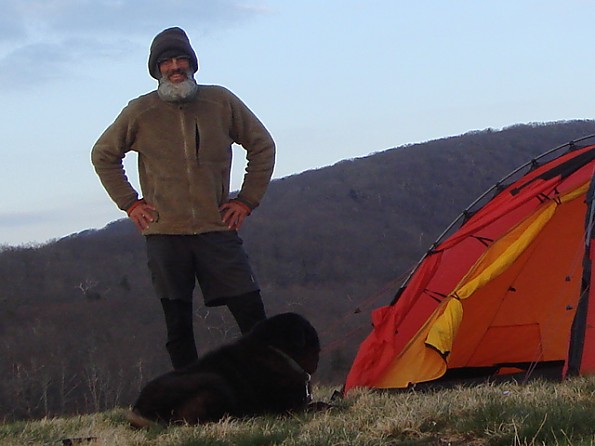 When the sun goes down I pull out my fleece jacket and wait for some down time on the sleeping pad. Shunka dog likes the high open ground. 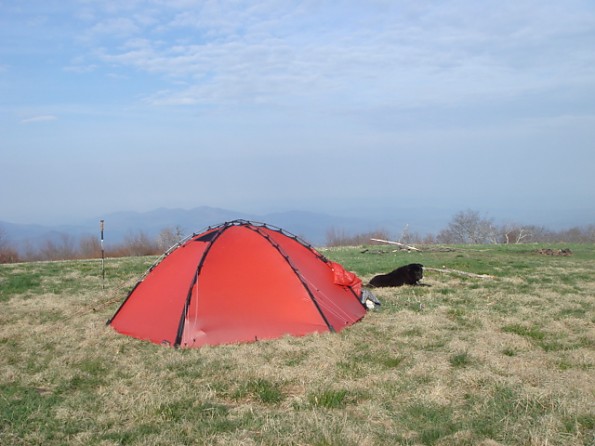 Sunrise on the Whigg is always nice. This fotog is looking southwest and shows the lower mountains and the far distant BMT as it moves south over State Line Ridge, Waucheesi Mt, and linking up with the old John Muir trail along the Hiwassee River. 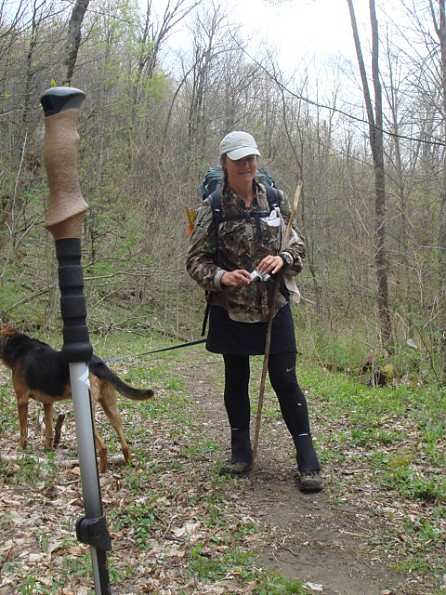 On my way off the Whigg I run into Tru(Trudy?)who has an interesting story. She started on the Pinhoti trail in Alabama and pulled the whole thing, and then swung down to Springer to start the BMT. I found her on the Sycamore Creek section and we conversed for a good 30 minutes. She's with her dog Timber. 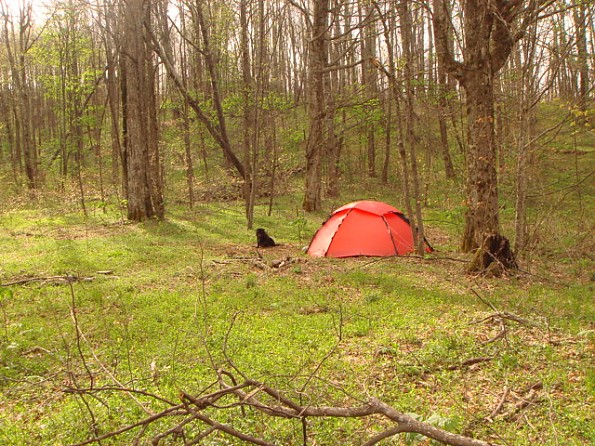 I swing back north on the B Mac(I'm waiting to meet up with a thruhiker named Amy--Willow), and discover this nice little site I call Barrel Gap Camp. 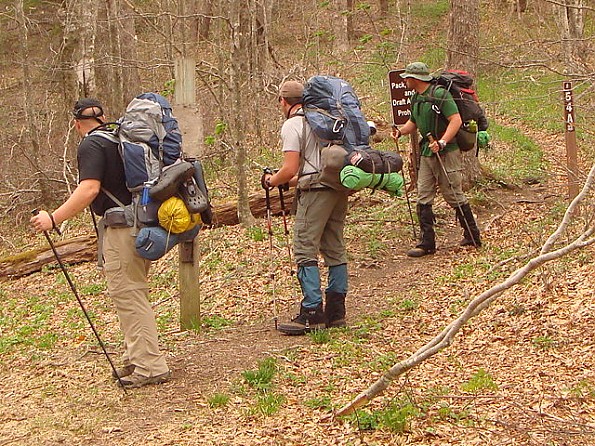 On Day 9 of the trip a big storm comes thru and since Barrel Camp is at 4,4000 feet and the storm is bringing in high wind and lightning, I decide to bail down to lower ground on the South Fork Citico trail. I'm not the only one. I find these three guys from Tampa also leaving the high ground for safety. We all go down the South Fork together. 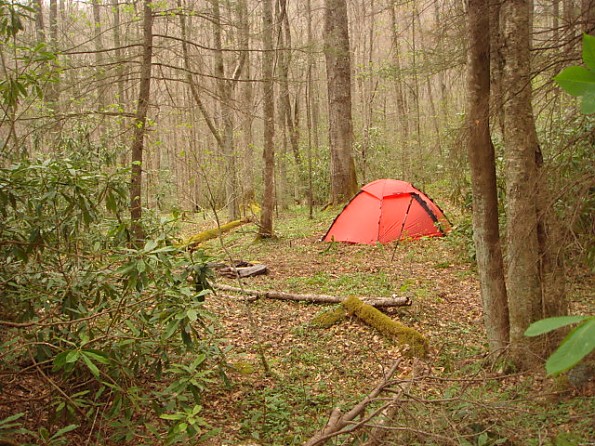 Here's the safe camp I bailed too and it's located in the upper valley of the South Fork Citico. I call it Iron Camp. Thru the night I got walloped with rain and lightning and a little wind but nothing like it would've been up high. On my little radio I heard the storm killed 10 or 15 people in the Southeast. 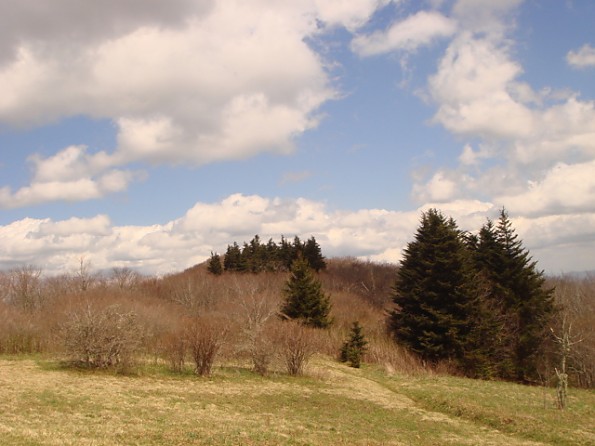 After the storm I leave the South Fork and climb 2,000 feet and reach Bob Bald where I set up a little out of the wind near the first clump of fir trees in the middle of the picture. 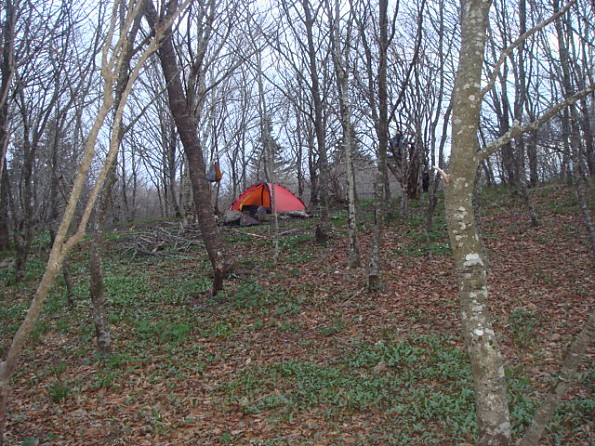 My camp on Bob Bald and it's in the protection of some trees. I call Little Mitten while out in the open bald and she has some sad news which cuts my trip short after a mere 11 days. She finds out that one of her friends was killed in a car wreck during the storm and so we plan an emergency pickup four miles away. I make it back for the funeral. 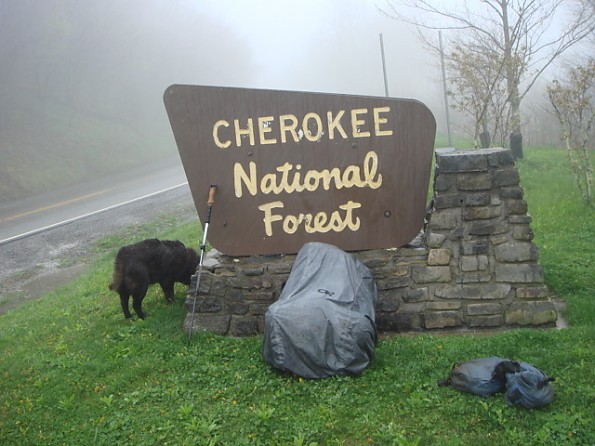 I usually don't backpack in a butt cold rain but due to the circumstances I have to hoof it out and wait for Little Mitten to pick me up. So ends another great backpacking trip in the mountains of TN and NC.

You covered a lot of ground there Tipi, I have done the BMT twice and the second time I stayed in Relliance TN to hang out with fishing buddies along the Hiwassee. We did the John Muir, and the Oswald Dome trails. I have gone back many times since then and have hiked around Chillhowie as well. 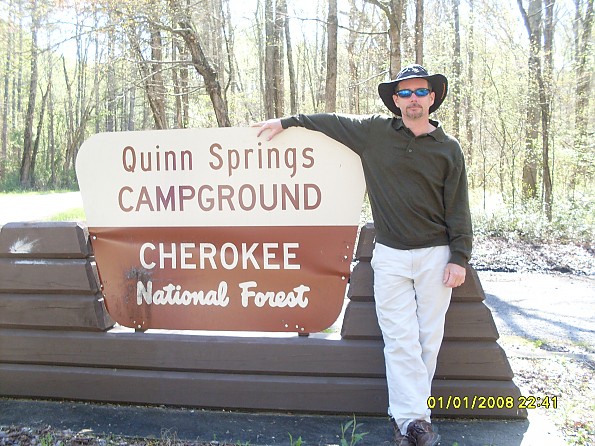 I like the fog in your picture Tipi. This photo is from a recent trip and is where my friends wanted to "base camp": Quin Springs campground, the trail head for Oswald Dome is here.

Thanks for the trip report and photos. My condolences to Little Mitten and her friends family.

Great trip report and pictures. Sounds like you hike a lot! I am looking forward to hiking this fall in Utah. Sorry to hear about your friends friend death.

Thanks for the sympathy. We had a large funeral as the woman was an RN at a Knoxville hospital and had a lot of friends, including Mitten and myself.

My condolences as well. It is always hard losing a friend or family member like that.

It looks like it was a good trip before the news. My oldest brother was up there on the north fork, south fork, and BMT, etc, over the weekend. If you didn't run into him I am sure you coulda' thrown a stone a hit him. :)

Gonzan: Was your brother with another guy from Charlotte NC? I saw two guys down on the South Fork on Sunday after the big storm.

He was with another guy, but not from NC- they are both from Chattanooga. I think they got back to their car mid day on Sunday. He said he saw two guys with dogs, but after showing him some photos from you trip report, we think it was another group.

More Topics
This forum: Older: Hike to Calloway Peak at Grandfather Mountain Newer: Hiked Dripping Springs Trail in the Temecula Valley on Sunday
All forums: Older: Morsan Tent - Do I have all of the poles? Newer: Any Final Advice for an Appalachian Trail Thru-Hiker?

Topic: Thruhikers On The BMT