Whigg Meadow With My Lil' Sis

Here we are at the Trail Head

Mud Gap sits right on the TN/NC border, off the Cherohala Skyway, at about 4,500ft, and the trail climbs around 600ft in 1.75 miles to the Whigg. We got off to a really late start, around 7pm. About half a mile up the trail, a violent thunderstorm assaulted the mountain, causing us to stop until it passed. We finally reached the meadow as the clouds broke and scattered, leaving the last glow of dusk to help us pitch camp.

Our Tent, a Eureka Pinnacle Pass 3XT, in the morning fog. It looks much gloomier in this photo than it actually was. The cloud-mist was glowing with the rising sun.

We got a bit of a late start, since we had slogged through the rain and set up camp so late in the night. But we had a wonderful breakfast of Sausage and Eggs, which we cooked over my home made pressurized alcohol stoves. Here is a video of us cooking over them:

There was an abundance of ripe, fresh, wild blueberries all around the meadow, which we took out time enjoying!

The highbush blueberries grow prodigiously on just about all of the grassy balds in the region. Here is Anna Picking some.

After breakfast and cleanup, we headed down to the pond that sits down between the meadow and the south arm of Little Haw Knob. At the Head of the Pond there are a couple springs that feed it where water can be obtained. The springs are very clean and sweet tasting. We filtered water into all of our bottles and relaxed in the cool fragrant shade for a little while.

The day cleared off bright and rather warm, though mercifully it is still cool at 75 compared to 95 in the valley.

For the afternoon we took a day hike down part of the Sycamore Creek Trail section of the BMT. We ventured off trail for about two miles, where we stopped for a late lunch and found this little guy hiding in a Turks Cap Lily

We arrived back at camp on the Whigg a little before the golden hour, and returned to the pond fill up on water and enjoy the cool of the day.

Just ever so peacful and lovely

The evening was just beautiful, with a cool breeze and clear skies.

On Sunday morning we fixed oatmeal on our alc stoves, along with the freshest, most delicious blueberries imaginable. After That we packed up before going on another day hike up to the summit of Haw Knob. There is an old road/rail bed, but most of it is completely overgrown with brambles and scrub thickets, as well as the most incredibly dense laurel thicket near the top that I have ever seen. Down a little bit from the crest of the ridgeline, on the SW side, it is quite lovely and open. The trees are almost all elevation stunted Beech, providing even open shade. Under the trees it is quite idyllic, with expansive carpets of forest grass and moss, dotted about with blueberry bushes and lichen covered boulders.

We stopped here on the side of the mountain to eat lunch and relaxe for a bit.

In the video you can just barely make out the sound of some ravens in the background. There is a pair of them that lives in the forest off the southwest side of the meadow.

After We had lunch we headed on down the mountain and out to Mud Gap and our car. 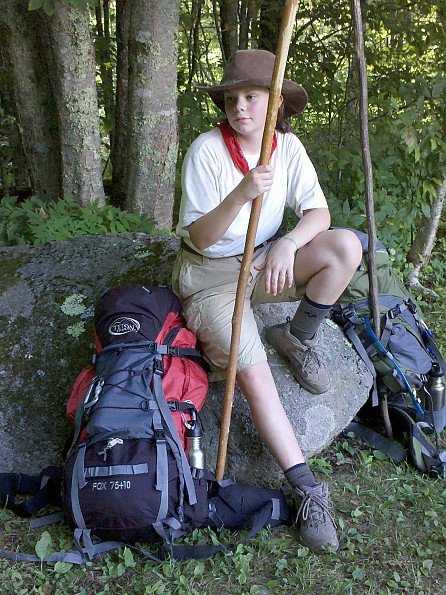 I have also posted our rout details and additional info on Google Maps. if you want to take a look at them, the map is located Here:

You really took tripreports to the next level with those awesome videos!

Very cool of you to take your sis backpacking! I really need to see the Eastern part of this country sometime. It looks amazing!

Thanks, FromSagetoSnow! I have another report on my trip last weekend up to The Bob and Hangover Rock that I will be posting tonight that has some more videos.

Really good stuff and I really enjoyed it! Your Lil' Sis will never forget it.

Looks like a great little trip. Did she give you any feedback about it yet?

She really loved it, and wanted to go with me and my brothers last weekend up to Bob Bald, but she had other obligations so she couldn't go. I was amazed at how fast she learned while were out- she am pretty sure she could set up the tent by herself, pack her backpack, use the stoves, etc all by herself next time. She is going to be quite the intrepid backpacker before you know it!

I actually read the report a couple days ago, but didn't have time to watch the video or leave a comment until now.

I was glad to see your inclusion of the seemingly small, yet important things such as breakfast, flowers, blueberries, and lichen.

I loved the photos of the trail and the meadow, although I have looked at it on a topo, I have never been to Whigg Meadow but now I know what it looks like.

The video really adds life to a story, I loved the sound of food cooking, and the sound of wind on the meadow. Some people might dislike the sound of wind blowing on the camera mic, but I like it. I know what the wind feels like on your face, and it's always a welcome part of a backpacking trip for me even in the winter.

It's great that Anna got to go, and that she enjoyed the trip. I also noticed she seems to have adopted your hiking staff.

I find that most people who think they would like to go backpacking end up having a great time if they go with someone who is experienced and can show them how to do things, and how to stay dry, warm, etc.

Good to see the alky stoves in operation, I've always found using something homemade to be rewarding, and I think in a small way it encourages me (all of us maybe?) to be more resourceful and self reliant. You apparently did a great job making the stoves and it was good to see them in operation!

I'm looking forward to your report for Bob's Bald.

...and I'm so looking forward to a trip up your way this fall, I really miss the mountains. Cold mountain streams, mossy rocks, and shady coves are something hard to live without once you've been spoiled to them.

I just want to know why from the same family that your sis is pretty young lady and you are funny looking?

Thanks Trout,
I am loving the alc stoves, I've used them on two trips now and they are wonderful. I keep saying I will make a post about them, and will sometime, but life crap keeps taking precedence.
Yep, Anna did use my old hiking staff. I made a new one out of a beech sapling that I absolutely love.
Let me know when you will be in the area if you want to, it would be great to go hike the North Chickamauga Pocket with someone who really know it- I've only been to that one once. It is strange, I always seem to go to the posket up in Dayton, even the though the is so much closer.
I was going to get The Bob trip report up this weekend, but some family crisis with my Grandparent's health kept me from getting to it. I hope to in the next few days, though.

Noddlehead, it's because my parents dropped me as a child ;)

"Let me know when you will be in the area if you want to, it would be great to go hike the North Chickamauga Pocket with someone who really know it-"

That would be cool, I would like some company too.

It's about a 4 hour hike to the campsite, it can be done quicker but you have to rush and miss a lot of cool stuff along the way.

That's a nice trip report, Gonzan. It's great that you took your little sister with you.

Nice trip report, I didnt notice it before, I think it was when I was in the hospital. I never saw a blueberry high bush before. I alaska they grow very low to the ground. Once while playing frisbee up in Denali NP I discovered some while picking up the disc off the tundra.

Thanks Alicia and Gary,
I just got back from my travels out in wyoming, so I am now behind on getting two trip reports up!