My son and I spent two days on a shakedown trip to make some gear choices and fine tune some technique for this area. We have been backpacking in the mountains for years, but the lake environment requires different gear and technique. The lake has several islands that we canoe to and camp on from time to time, this trip was just an effort to make those island camping trips work better.

We drove out to the lake and parked in the parking lot for the boat landing where we walked a short trail through some swampy woods to gain access to the lake.

This is me at the entrance to the boat landing area. 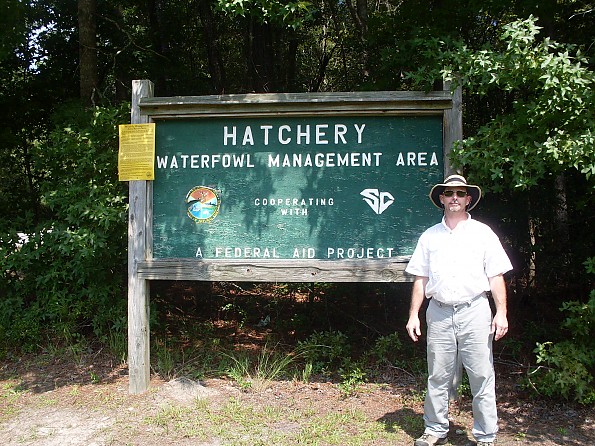 This is my son Mike W. We have the same first names, but his middle initial is W. 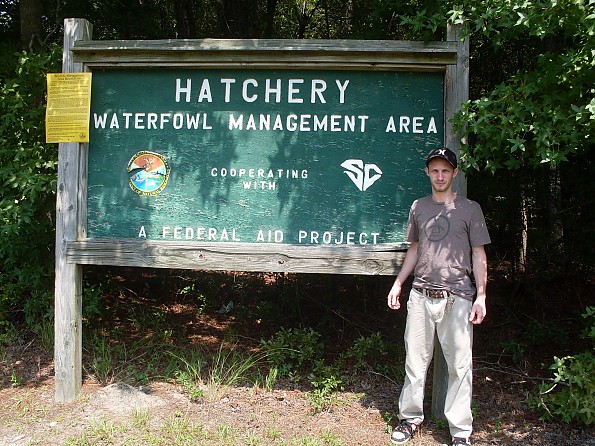 Headed out of the parking lot, ready to find a shady spot to put the tent. 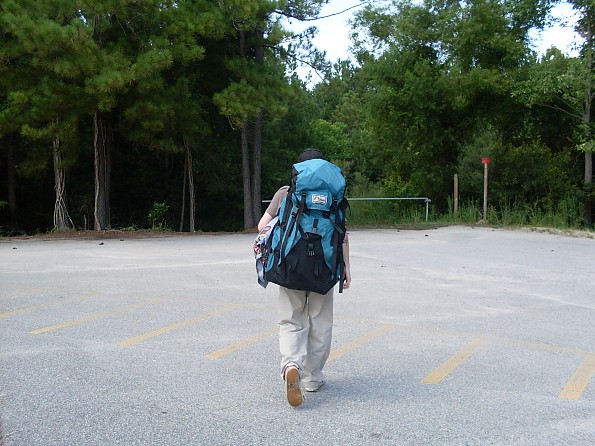 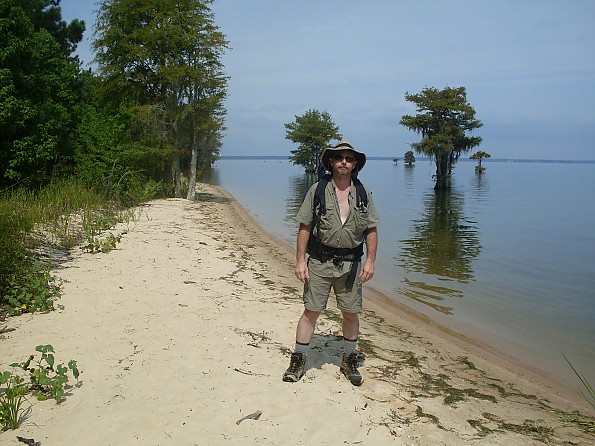 Here is the spot we chose, nice and shady! 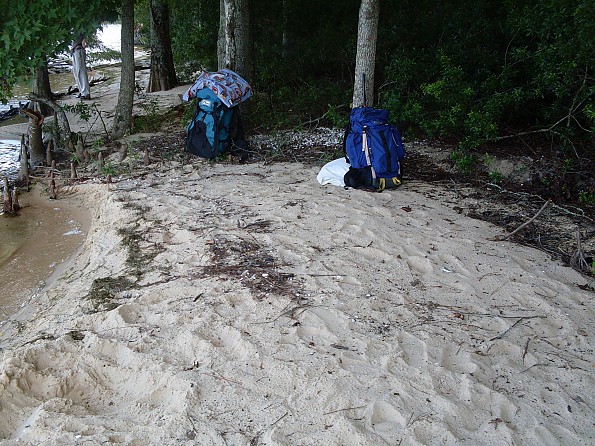 This is our Mountain Hardwear Skyview 2, a great tent with a huge vestibule. Photo taken from the alligators perspective. 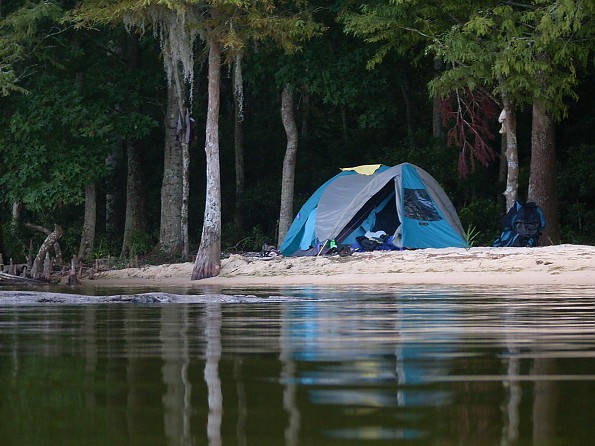 Here is our view of the lake, Cypress trees grow out in the water all around the lake close to the shore. Osprey's can often be seen resting in the trees, but I wasn't able to get a photo of one. 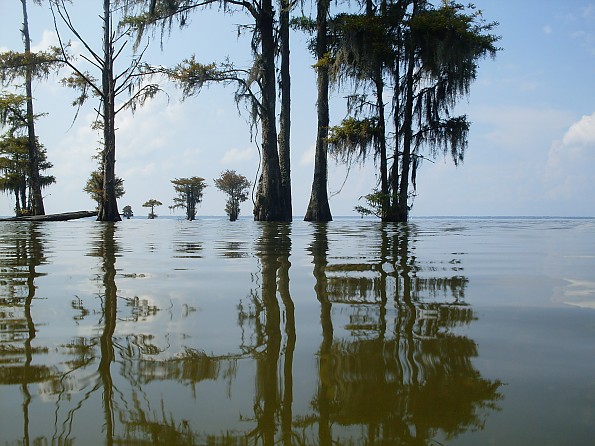 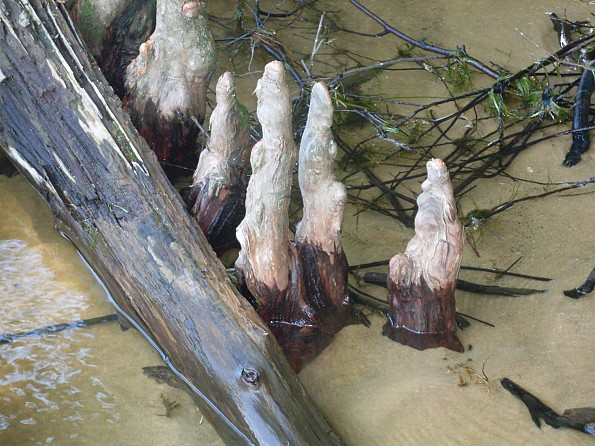 This is a photo I took while wading inside a group of Cypress trees later in the evening as the sun began to set. 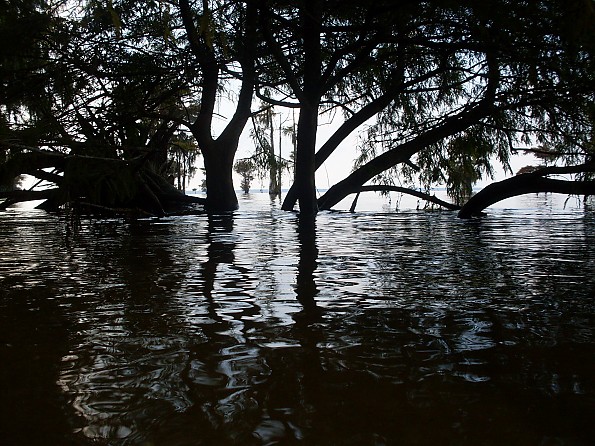 Another photo taken at the same time, but out towards the lake as some storm clouds began to move in. 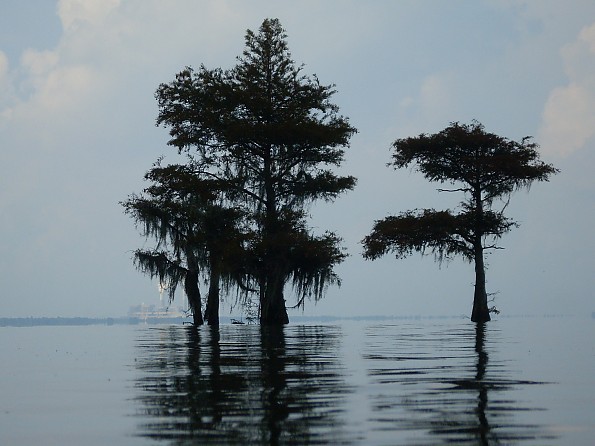 As it got dark we started to hear thunder and lightning lit up the sky, the lake winds picked up and the water got very rough. We got rained on later that night, but we stayed dry in the trusty MH tent. 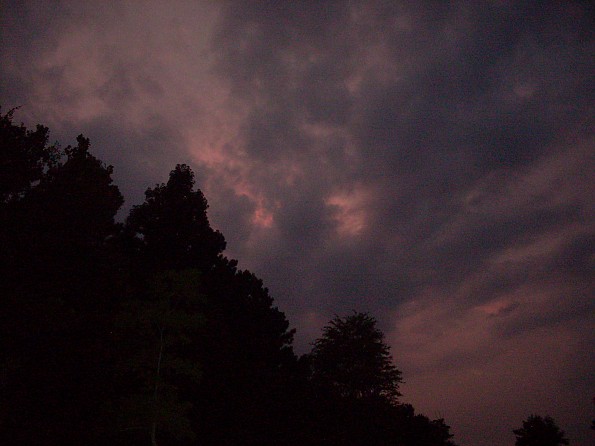 We ate our second supper rather late, we had Salmon patties & rice. I like to eat good & I enjoy cooking. 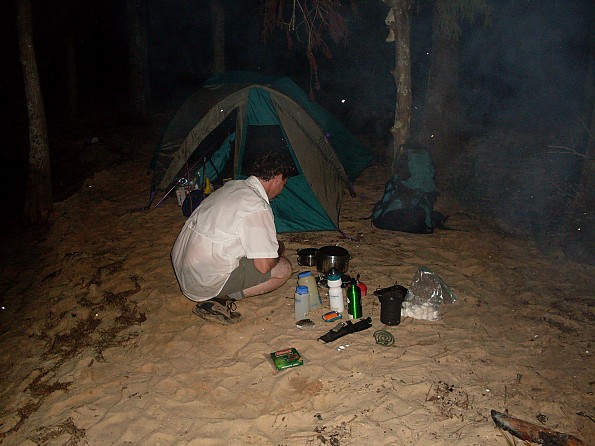 Although I don't carry a gas lantern much backpacking anymore, they are nice to light up camp. This is my old Campingaz Lantern.

To the right of the lantern you can see an old weathered teddy bear someone left hanging in the tree, if it was meant to be a warning I wasn't sure what it meant. 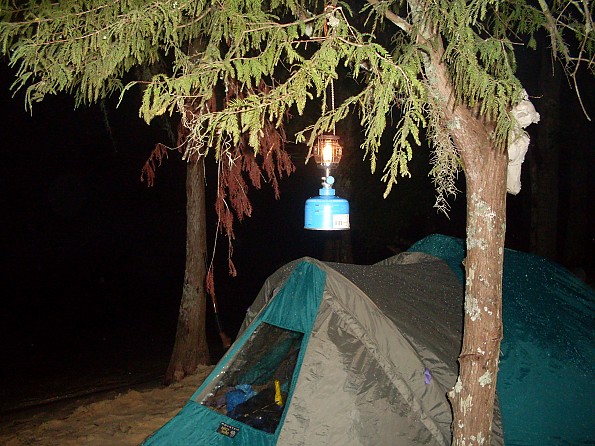 Before going to bed we tried something new, we call it a 'Roasted Marshmellow'. I don't know if anyone else has ever tried this but it's not hard and we will post instructions in the camp kitchen forum soon. This was actually Mike W.'s idea. 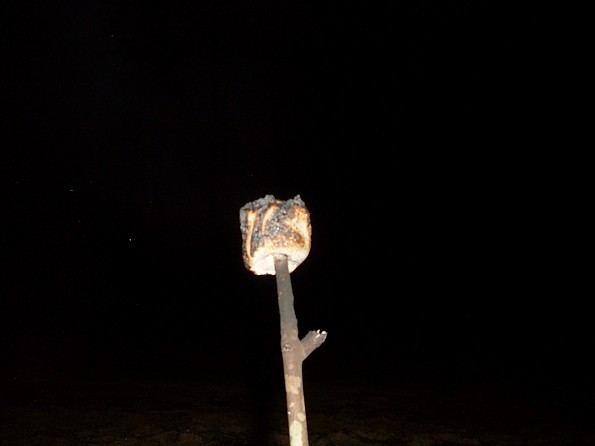 Morning time and also time to find the coffee! 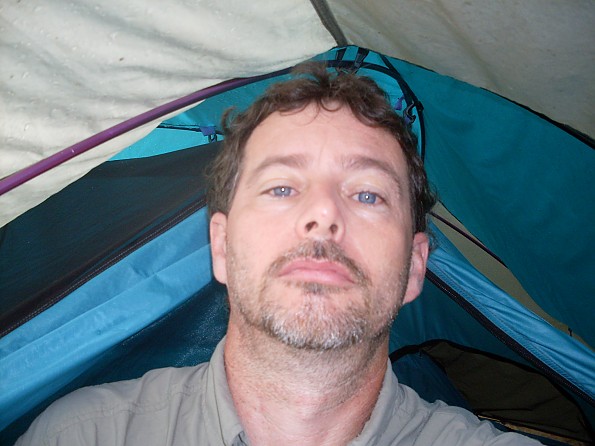 Does your vestibule look like this during a trip? Where's the coffee!? 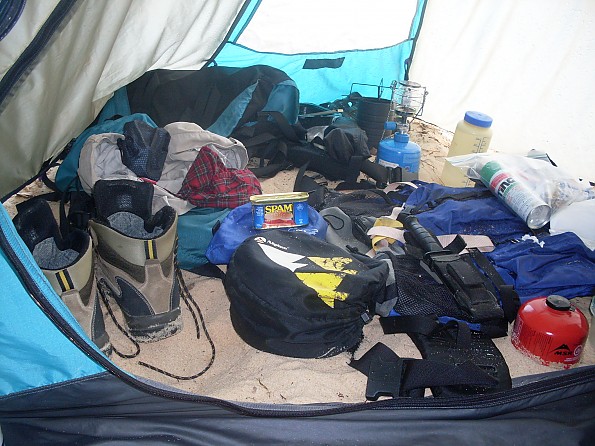 Okay I left the coffee at home, but after a breakfast of fried Spam & Potato Cakes I enjoyed the cool and quiet morning for a bit, I have always liked just sitting for a spell early in the mornings to take it all in. 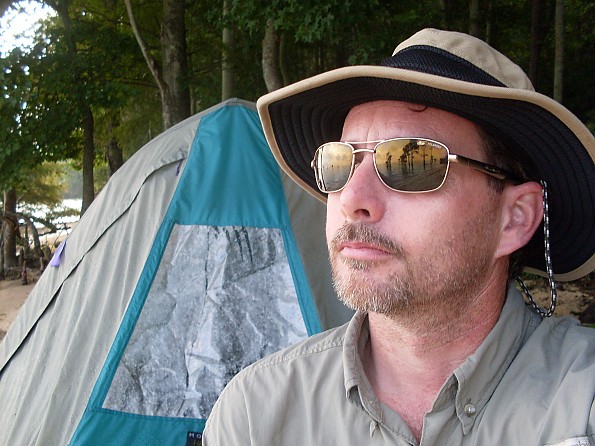 No photos of huge alligators or snakes on this trip, but the islands are full of them so hang in there. We did find a large clam shell that washed up during the storm. Here it is beside a mini Bic lighter. 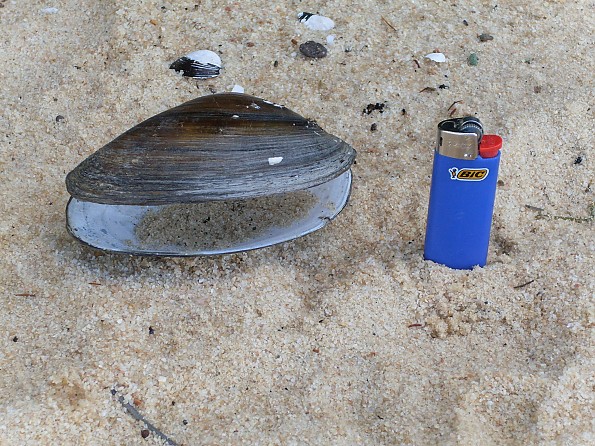 I walked the beach for a while in my bare feet, they liked it a lot. Where's those barefoot shoes? 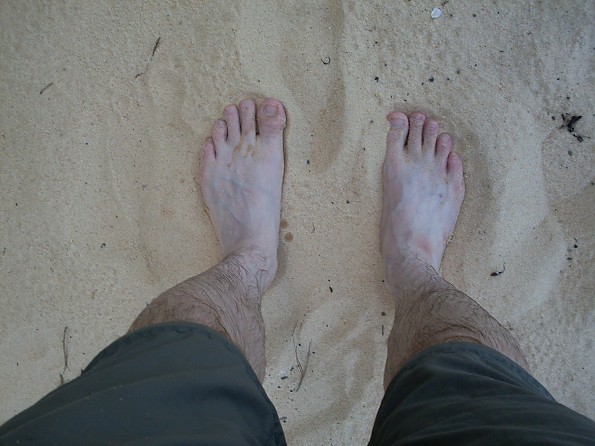 Okay, survival quiz: You're starving....what would you do? 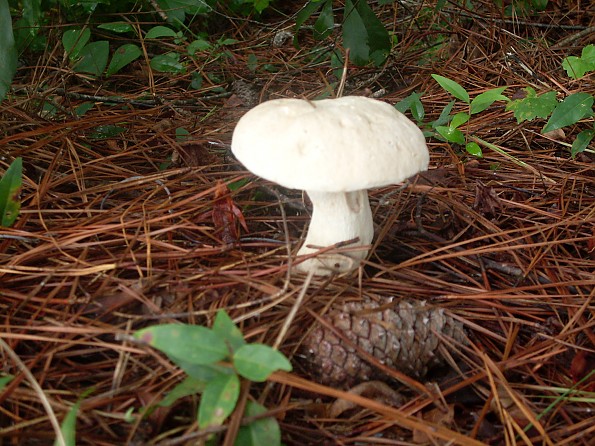 Hope you enjoyed the photos, and thanks to the whole Trailspace community for just being there with advise, gear reviews, and encouragement.

Thanks for sharing, brings back memories of the southeast. I'm glad I'm not the only one who forgot the coffee. Fortunatly I realized it half way to the trailhead and stopped to get some. Glad you guys had a good time.

Great pictures and report. Since I don't anything about mushrooms I would eat the pine nuts.

To be honest Gary C. it was kinda of a trick question.

Here's what happened, I was walking down the lake shore to see what I could find to eat, just out of curiosity. I spotted the mushroom and was trying to remember what kind it was, but I didn't bring my field guide.

Edit: I thought it was a Blewit, after looking it up it says they are purple, I'm a fungus novice.

As I was standing there I looked up, and at eye level right in front of me was a Muscadine vine with a good amount of ripe ones.

I thought that was funny, I almost missed them because I was focused on the mushroom. 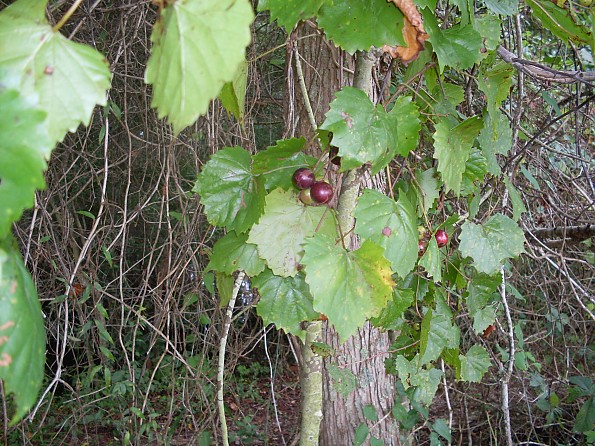 I ate a large handful of them, and just chuckled, some survivor I am!

Luckily mushrooms work good with the standard "is it safe to eat test".

Smell it, if it smells repulsive or foul in anyway, don't eat it.

Touch it to your lips, wait 15 minutes, if nothing happens(no soreness, redness, burning, tingling etc) touch it to the inside of your mouth and tounge, wait 15 more minutes

Bite off a tiny piece, and chew it in your mouth for a moment then spit it out, wait 15 minutes. (if it tastes really bitter, sour etc, or causes burning, tingling, redness, soreness, bumps, hives etc then DO NOT EAT IT)

Then finally, eat a small piece and wait 6 hours. If all is still well, then it is probally safe to eat.

By no means a quick process, but in a survival situation it will help you to identify potential food sources. It has been a long used method around the globe, especially by militaries for a long long time. I was shown this in SERE school and by no means if it failproof, but is better than not doing it. Most poisonous or toxic plants/food will either smell repulsive, or taste repulsive or really bitter, and most will cause some sort of redness, burning, itching, tingling, soreness, or cause bumps or hives on the sensitive skin you touched it to.

Bah, silly me. I forgot to say thanks for sharing the trip report!

Nice report TH with some great pictures. I personally would only eat two types of mushroom in the wild. One is the Morels and the other is Shaggymane, I think I also read somewhere that mushrooms really do not have any real food value. Of course I am not very well versed in eating them. Anyway yesterday I bought a Snow peak stove, couple cans of fuel, a Themrorest pad and two Mountain House meals. Almost got everything I need. Should get some bear spray I guess....

I have not spent much time in that type of environment, and find bald cypress swamps creepy. I am sure much of that aversion is just due to unfamiliarity.

MMMM...Muscadines. I do love them, but I find that the dark varietals have skin that is especially high in citric acid and can make your mouth sting after eating a bunch of them. Mushrooms are one of the few things that I have not studied much at all, certainly not enough to be confident of selecting edible ones.

I have a photo of one of my brothers in his morning "pre-coffee" state I will have to share :)