My second weeklong trip this year was to an area in the middle of Kings Canyon NP that I have wanted to see for a long time. We started at Roads End on the Copper Creek trail, where the smoke from the Sheep Fire made for poor visibility

As the day progressed, the smoke got so thick I couldn't even see the opposite canyon wall, so no more pics for a while until we got up to Granite Basin, where we camped the first night

The next day we went over Granite Pass, here are the views looking south and north from the pass

And we continued past State Lakes

to our final destination for the day, Horseshoe Lakes

The next day the fun began. The area I wanted to see has no trails, so we headed off trail over Gray, White, and Red Passes to end the day at Marion Lake. As we approached Gray Pass, we could see north across the canyon of the Middle Fork Kings River and up the Goddard Creek drainage

and then we could look across this drainage to see up LeConte Canyon, with the Palisade Crest visible on the right

And finally the view from Gray Pass, looking across the drainage of the south fork Cartridge Creek toward our next goal (white pass, out of view behind the peak on the left)

From there it was an easy traverse to Red Pass, this is looking down from Red Pass, with Marion Lake just visible on the bottom toward the left

Looking down the ridgeline from the pass

From near Marion Lake, looking back up to the pass

This is where the adventure began. My hiking partner took a hard fall on that slope, and landed with his hand jammed between rocks. He got a compound dislocation of the distal joint on his index and ring fingers on his right hand - the tips bent all the way back, popping the joint out, and splitting the skin open on the underside of his fingers so that he could see into the joints. Fortunately, he has 18 years experience as an ER nurse, so he popped the joints back in and dressed them when we got to Marion Lake, and he had no infection issues during the four days it took us to get back to the car. Anyway, we continued on to Marion Lake, descending this chute on the final approach to the lake

And this is Marion Lake, one of the more beautiful lakes in the sierras

The following day we reached my goal for the trip - Lake Basin. I'll let the pictures speak for themselves

From upper Lake Basin, we went over Cartridge Pass, here are pics of the lower and upper parts of that route

The view from Cartridge Pass, looking across the canyon of the South Fork Kings River toward Bench Lake

From there we descended into the canyon of the south fork Kings, this is from just above the bottom

My original plan was to then head down the canyon through a tough bushwhack to connect with the Woods Creek trail at Paradise Valley, but due to my hiking partner's injuries (and he also had a boulder roll onto him as he tried to climb over it going up Cartridge Pass, gouging his leg badly) we decided that it would be better to just head the two miles or so up the canyon to get back on an actual trail (the John Muir Trail at that point); we camped that night where we got to the JMT.

The next day we followed the JMT over Pinchot Pass. As we ascended we could look north toward Upper Basin and Mather Pass

Soon we got to Lake Marjorie, and enjoyed one of the bluest lakes in the sierras

Another lake close to Pinchot Pass

the view south from the top of Pinchot Pass

We camped that night just below Twin Lakes. The following day we descended the Woods Creek trail, here are some views on the way

Soon we could see Paradise Valley below us

Here is where the south fork Kings comes into upper Paradise Valley, if we had followed my original plan we would have come out here

A nice spot on the south fork Kings

And we camped there, on this nice spot along the south fork Kings

And the last day we descended to Roads End, this is the lower part of the canyon of the south fork Kings above Roads End

It was a very rewarding trip. And my friend's fingers are healing very well, too.

Excellent Trip report. I've always wanted to explore that part of the Sierras as well. Loved the pictures too!

Beautiful! For me the view from red pass is epsecially striking. I will be in CA for a 6 month sabbatical next year and getting back to the Sierra is a top priority.

Wow, great pictures, looks like that was a nice area to be in. Those lakes are so blue.

Compare this shot from 1911 with your shot at top

Those old pictures were taken with a serious wide angle, or they are composite shots. With my camera, I could only fit in about half of those frames on the widest shot (I think it is equivalent to about 38-40mm on the old lenses on the widest setting).

I think they are composite pictures, most lenses that would be that wide angle have too much distortion on the edges of the frame.

The one labeled Mt Brewer should really be labeled East and West Videttes, those are the major peaks in the center. Mt Brewer can just be made out on the horizon on the far right.

Lambertiana, I shoot a Canon XTI DSLR with a 18-55 lens, the extreme wide angle lense's are too expensive for me so I shoot my panos in side by side frames. The image below is four frames side x side then photostiched together and cropped. What kind of camera did you shoot your images with?

The panos above are two images side by side too. Look closely and you can see a white frme edge between them in the middle.

Below are the four frames I took separately and stitched together. The program is a Canon Utilities that came with my XTi 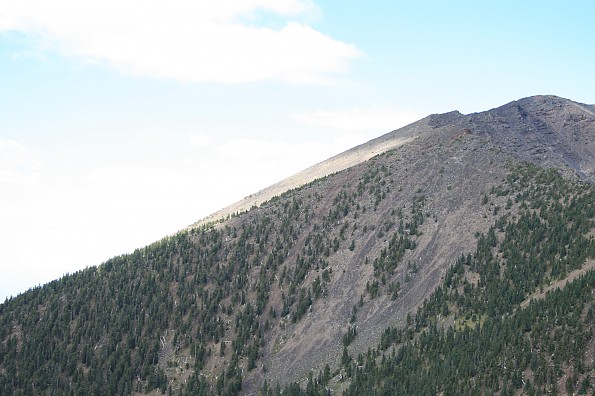 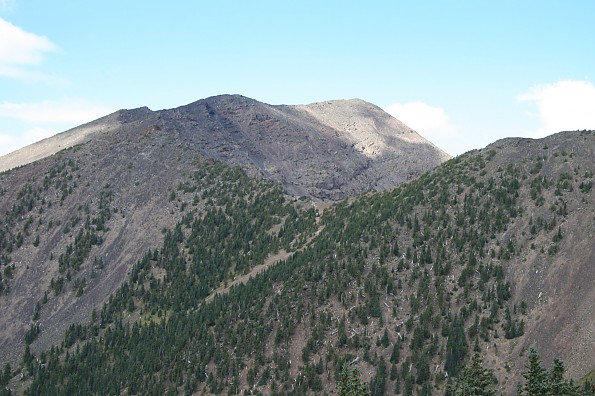 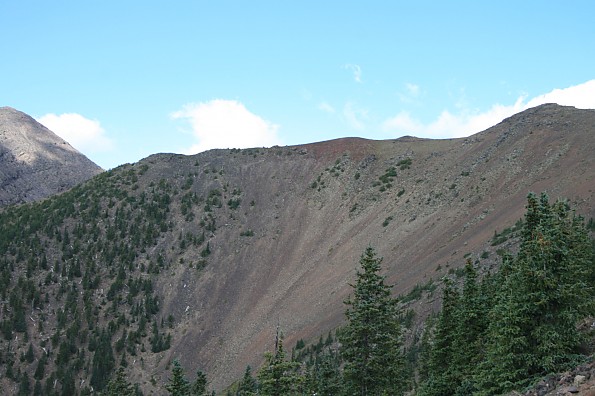 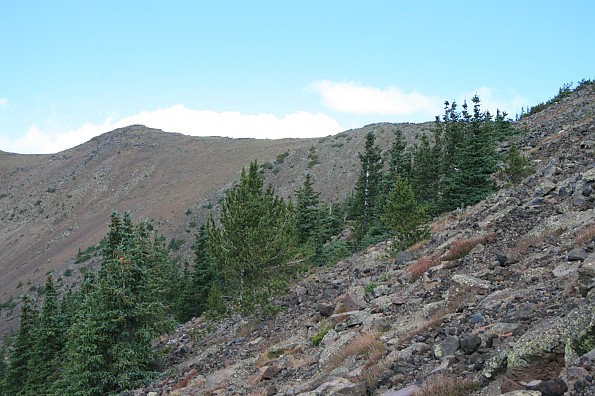 Gary - Although I come from a serious photography background (and I used to lug a Leicaflex SLR on backpacking trips) I gave up carrying anything heavy when I decided to get serious about dropping my pack weight. The camera I have been using for the last four years is an Olympus SP-350. I don't want to go all the way to the micro point and shoot cameras, but this is close.

I go light too, I have a 1.4 lb 20 degree down bag by Golite, a ensolite pad, a Golite Shangri-la 3 tent and a Mountain Hardware pack. I use a pocket rocket stove and a one quart MSR cook pot with a nylon spork. And two aluminium Sigg water bottles. Packed the whole thing weighs about 15 lbs with water. My Canon XTi weighs maybe a pound and I use a 4GB card for pictures.
Last big hike I did in the Tetons a couple summers ago I was out for 3 nights with less than 20 lbs with food and stove fuel.
I have been a backpacker for 34 years, 20 years in the Grand Canyon. At 54 now I don't like carrying so much weight that I feel my age. I am strong but still don't like to overdo it.

Actually you could use a photostitch program using any pictures from any camera no matter was size format or even a point and shoot. You just take the photos side by side, leaving something in the left side of the image for the stitching to recognise to seam them together.

I like to stand on mountian tops and take enough wide was possible shots all the way around 360 degrees, then stitch them together to get a full shot panoramic.

Also with photo stitch its posiible to make stacked images by shooting say 2 images side by side with 3 more above and then stitching the 6 imaged on top of one another.

Something else thats fun with shooting side x side is to have a friend stand or sit in each frame as its shot, then when the images are stitched together there are 3 of him or her in the finished shot, like triplets.

A friend back east does this with him and his wife in a single frame shot and they move around the image. 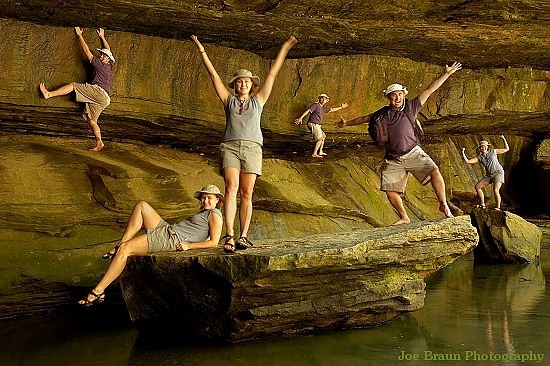 Attack of the Clones/Joe Braun photo

Not sure how he does this one?