Story in the Sand

Yesterday, my wife and I went for a day hike on the Colorado Monument. There is an old wagon trail that we like to hike along and since it is not an official trail, you see a lot of signs of wildlife and not very many people.

We were on the trail a short distance when I noticed the fresh tracks of two bighorn sheep in the sand. The tracks looked unusual as they were very deep, with loose rocks kicked around, and spaced far apart like they were in a big hurry.

I soon found the source of their rush when I saw the perfect print of a mountain lion in the sand next to the bighorn tracks. It was running after them trying to score a sheep dinner.

I could imagine the bighorns hurrying down the trail knowing that the big cat was behind them, intent of catching them, and they in turn determined to escape with their lives.

We followed the drama unfolding in the sand of the trail, not knowing what we would encounter around each twist and turn. After about a quarter of a mile, they veered across a wash and up the other side with the lion still in pursuit.

I was relieved that we did not come across the big cat on a kill as that could have quickly become an ugly situation. It was exciting enough to have witnessed the tale of the hunt in the sand.

Tomorrow, we will take our son up there to make some plaster casts of the tracks and maybe we will follow the tracks across the wash to determine what was the outcome of the hunt, but only to the extent that it seems safe. It is my guess from the distance that the lion had to chase the sheep that he came up empty.

Neat story! Did you get the plaster casts made?

Defined tracks are one of the reasons I like hiking and cross-country skiing in winter. You can see stories in the snow you'd miss other times of year.

One author I read calls them "tracks of the unseen" and I always think of that phrase when I see a series of tracks.

We went back Saturday afternoon with our son and got a really nice cast of the mountain lion print. It looks much bigger than the track seemed in the sand.

It appears the lion gave up the chase right after they crossed, as the far side was steep and rocky. We followed the sheep tracks for another quarter mile with no sign that the cat had picked up their trail. This time the prey prevailed. 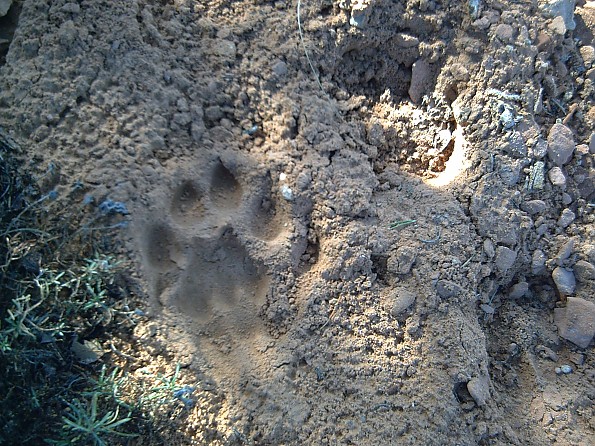 That is an excellent ptint. You can clearly see the three distinct forms of the center foot-pad, which confirms it as a large cat print. Though the TWRA refuses to admit the presence of Mountain Lion in TN, I have followed a set of deep tracks in wet sand in the Tennessee River Gorge. There isn't a good way to controvert that evidence. Well, I suppose someone could have let their pet panther out for a stoll, by itself, in a wildlife preserve, in a secluded canyon...

I was hiking in the lower Sabino Basin on Wednesday here near Tucson and saw what could have been either a Mountain Lion Track and a Bobcat track along the same trail area or a Mtn Cat and her cub that I later found out had frequented the area. Its always cool to see such a track!

Gonzan, I understand your frustration. You know what you saw but the biologists need scientific evidence to confirm the presence of a particular animal.

We had reports in the spring of a wolf sighting on a ranch several miles to the NE of here. By the time the biologists got there to investigate, the tracks were many days old and by then very inconclusive. They searched the area and took samples of scat for DNA testing but the results came back as being from dogs or coyotes. It is only a matter of time before some migrate down from Wyoming.