10 days along the Oregon coast

As many of you know, or dont, Apeman is traveling down the coast on his old BMW bike. So we got together for a few brews, food and camping. I was having so much fun I almost didnt take any pictures. 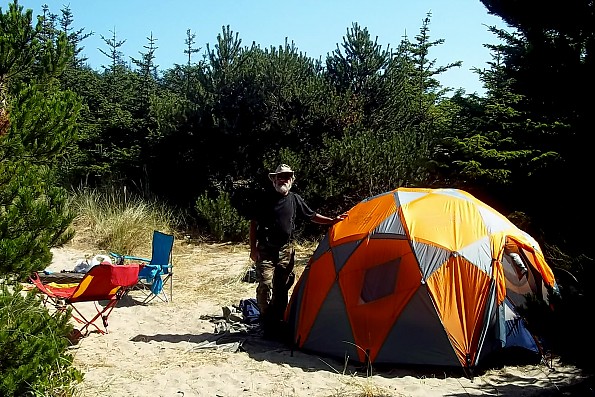 This is no backpacking trip. 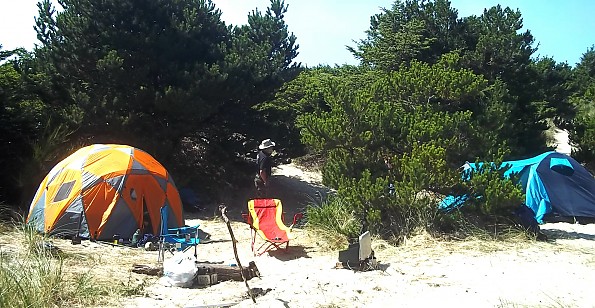 Sand, sand, wind, sand, and loads of sun. The first thing I noticed was the diferant birds, more squirels in the area. I should of listened to myself, as I reconized my voice! For the first time in this area we had Racoons. Not once but two nights they got the chips and bread.

Brian an I took a hike to Threemile Lake. It was still flooded. I think that is why these critters were down at the beach. I think the bears might have followed too.

Well Rita and I are home, Brian is on the road...... If you meet him dont make him eat food or drink a Barley Wine.
.

So it's funny that for only the second time in my life I’ve encountered the term Barley Wine within a few weeks. I tried some that a person made and brought to Grandfather Mountain a couple of weeks ago. It was quite good...

What brand of tent is that dome? Looks huge and heavy?

I am taking a stab at a Mountain Hardwear expedition model.

Ricks the winner! But Brian is nothing short of overkill on everything he does. :)

mike- that MH is the perfect 3 season solo.

Perfect for those UL trips. Room to sleep 1, with room left over for 4 growlers! LOL

But realy it is a great tent. In the morning the colors are very warm and happy. If one had to stay in it for along time, it would be very comfy.

Brian should be home soon. He will add a few words to his trip.

I believe Sierra Designs has/had a tent with similar color configuration/pattern. I am not sure but I think it is blue and yellow. 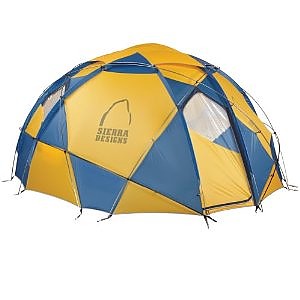 Is it over-kill? Not too Brian and thats what matters right? I never knock anyone for what they use... But I will always commend them for getting out there.

We had a good time with Brian. Lots of laughs. I'm hoping to see him again up in Washington. I'm sure he will bring a differant tent. He has 31 of them.

Mike very nice area, how far south in Oregon where you guys?  Is not down around the Dunes?  I have not been down in that are yet but I hear it is nice.  I guess you just have to stay out of the areas with the ATV's.

When and where are you going to meet up in Washington?  On the Coast or down South?  If you don't mind me asking.  :)

I love camping on the cost it's on of my all time best things to do!

Wolfman, we were in the dunes just south of Florence. If you love sand and wind it is great. Rita and I are going to the kite fest in Long Beach Washington. But we found that campgrounds are packed. So we are staying just on the Oregon side.

That should be cool!  But that the week after we get back from the coast and I know I will be busy wrapping up some jobs that week.  But have fun!

Eel Creek campground is one of my favorite in Oregon, and it's at the edge of Oregon's largest dunes and ORVs are not allowed on the dunes.  It's 2.5 miles, over sand, to the ocean.  There are many small sand lakes with pine woods which are great for backpacking/camping.  Lots of animals out there, and some spots of quicksand.

Topic: 10 days along the Oregon coast