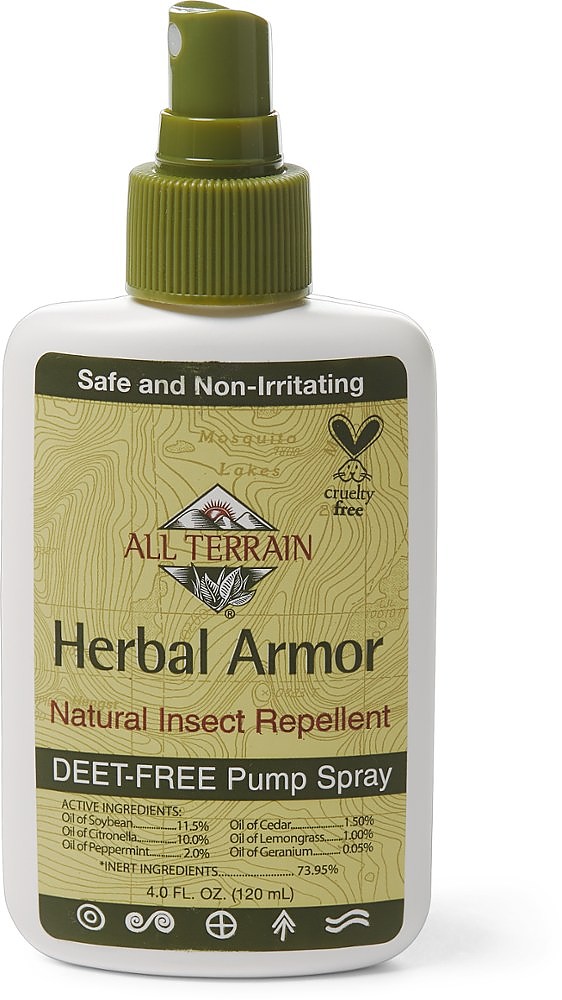 Product Details from All Terrain »

This is the only DEET-free bug spray I have found that is effective against the mosquitos and ticks in New England. However, it doesn't work well as you head farther south down the coast.

I don't remember exactly when I first discovered Herbal Armor, but it is now the only insect repellant I carry when I'm in New England. It is, however, one of the few pieces of gear that I only carry in certain regions. While it has served me well on hikes throughout New England, it has failed me miserably every time I have tried to use it farther down the coast.

If I only hiked in New England, I would easily give Herbal Armor 4.5 - 5 stars. However, since I tend to jump all over, I can't always use it, and thus can't rate it quite as high as I would like.

I was originally drawn to Herbal Armor while searching for a good DEET-free insect repellant. This one uses a mixture of citronella oil, soybean oil, peppermint oil, cedar oil, lemongrass oil, and geranium oil. Oddly enough, three of these plants are things I keep in my garden to keep pests at bay. These plants are known to repel mosquitos, ticks, spiders, mites, etc.

By concentrating the oils from them, you get a super boost of bug repellant! The only downside is the smell (If you really like mint, you probably like this too. If not, this could be unpleasant).

I have been using this insect repellant throughout New England for at least the last 6 years and have not been bitten by a single tick (knock on wood) in that time. Moreover, I can count the number of mosquito bites on my fingers (they're usually pretty noticeable on me).

However, I have found that the effect of this insect repellant is limited to certain regions. While it works wonderfully on my hikes in Massachusetts, New Hampshire, Vermont, and Maine, it had less of an effect when I was hiking through the Smoky Mountains. Most insects left me alone, but I definitely had more attention from biting flies that I was used to.

When I spent a few days on Assateague Island, off the coast of Maryland, I was positively eaten alive (in spite of wearing enough Herbal Armor to keep even the local ponies at bay!). The same thing happened when I was down in North Carolina. I'm not certain what is different in the Central Atlantic region, but the insects there don't seem to mind this mixture nearly as much as their Northern cousins.

NOTES:  There are a few things I have found that actually enhance the effect of this insect repellant.

Don't put too much of this stuff on in an enclosed space.  I love mint, but there is definitely such a thing as too much of a good thing. A few years ago, one of my friends accidentally sat on a bottle of Herbal Armor and popped it, draining most of the bottle into the fabric of the back seat of my car.

It only took a few miles before we had to pull over due to the fumes (the looks we got at that Burger King were amazing). The smell hung around on us for a full 5-day hike and in the car for close to three weeks.

Thanks for the recommendation. As New Englanders with kids, this is helpful, since we're often trying out different non-DEET insect repellents here in Maine. Random note for you, the founder of Leap Organics was in the same college graduating class as me and my husband. So, it's nice to hear that you like his products. 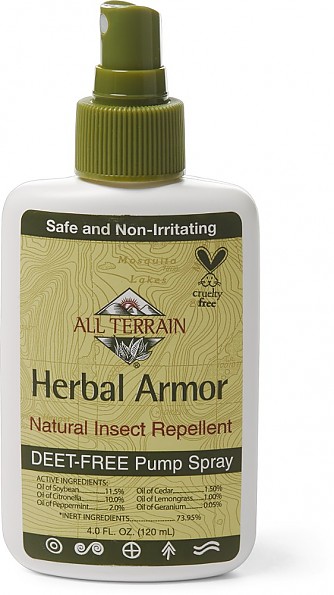 Browse All Terrain's top-rated first aid and hygiene and more.