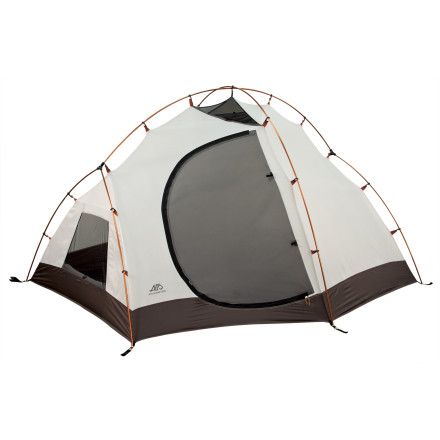 Overall this appears to be a pretty good tent. Contrary to some other reviews I've read, this is a true three-man tent. This is obviously not an alpine tent, but from what I've seen so far it does appear to be an excellent value. I will be testing it in Big Bend National Park for the next three weeks and will review further at that time.

Just got this tent yesterday and we set it up in the living room. I've read reviews stating the tent is too small to sleep 3 adults. Not so. Both of my adult sized sons and I have plenty of room in this tent for sleeping.  There are vestibules on either side of the tent for storage of packs, boots, etc.  IMO, when a tent is described as a "3-man", it means for sleeping in...not for setting up house.

This tent uses aluminum poles for support which was its biggest selling point to me.  One of the poles uses a couple of cleverly designed 3-spoke aluminum hubs. That the hubs are made of aluminum instead of plastic says something about Alp's attention to quality IMO.

I was disappointed to find that this tent does not close up completely. There is a window at each end that almost zips shut...but not quite.  To me, this detracts from Alp's "4-season" designation  When I'm tent camping and it's in the 'teens outside, I don't want even the tiniest draft inside my tent!

I do find it odd that there is a seam where the tent walls meet the floor. This is old school tent construction - but as long as the seam is sealed properly it shouldn't be a problem. We'll see.

We are carrying this tent to Big Bend National Park next week and I will review further after that.  Cheers.

My sons and I camped at the So. Rim of the Chisos Mountain Range last January. The campsite was at 7500 feet and we arrived at dusk. We set up the tent quickly and got inside as the temperature was dropping rapidly. The temp was in the low 20s and we were comfortable. This tent is warm! Once again, the amount of room available in the tent seems sufficient for 3 normal sized adults to me.

Spring  of 2014:  My wife and I camped in the tent last weekend at El Rancho Cima. Rained off and on all day for the first two days with a pretty good line of thunderstorms pushing through with the associated heavy rain on Saturday night. The inside of the tent stayed dry. With just the two of us in there we had more than enough room for all of our gear minus our boots which we left in one of the vestibules.

I should mention that the vestibules are a good size for gear storage and they stake out far enough away from the tent body to shed high winds efficiently.

Thanks for the update on your tent, Blake.