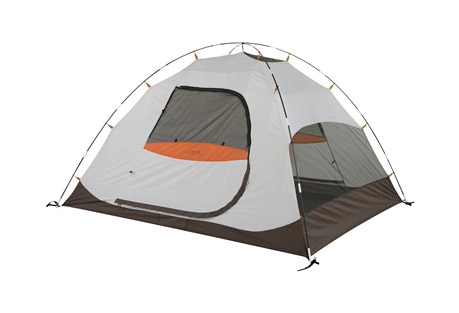 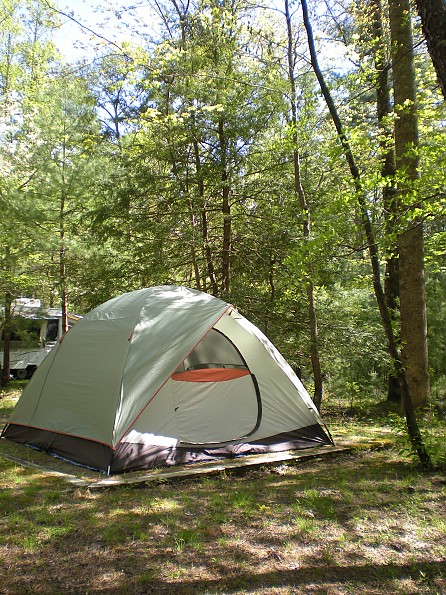 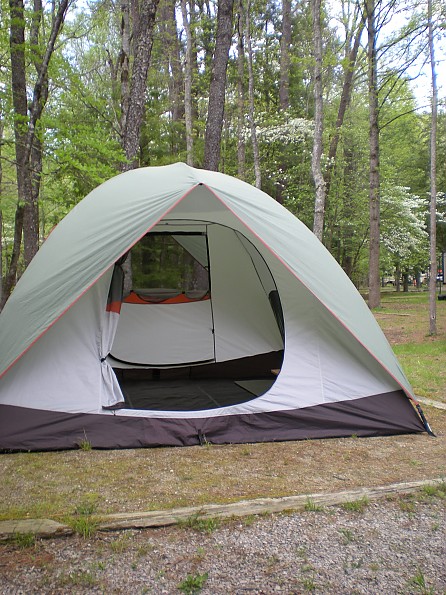 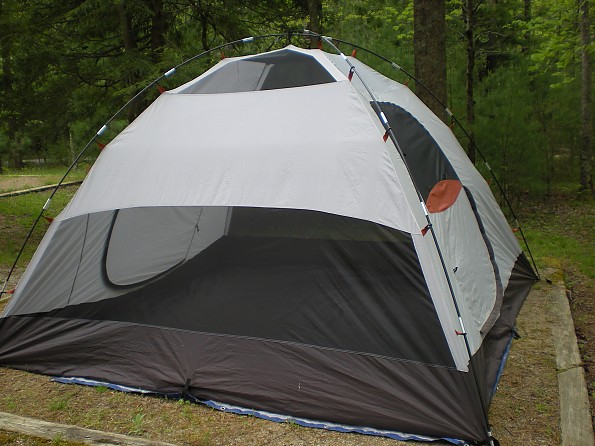 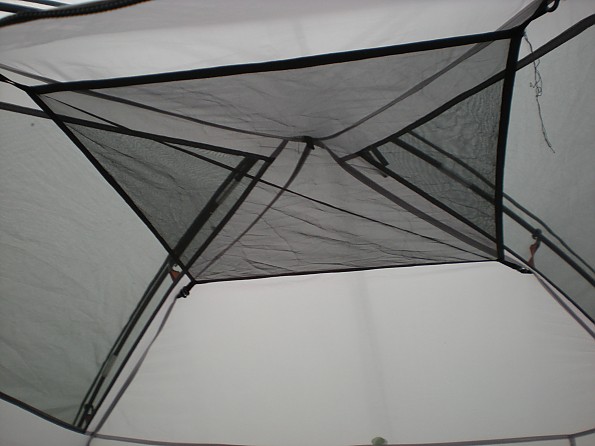 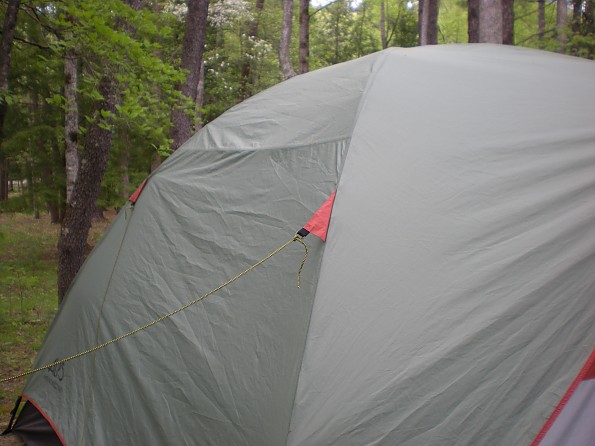 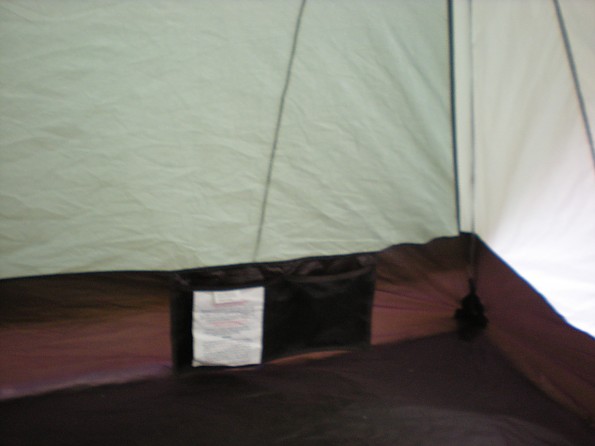 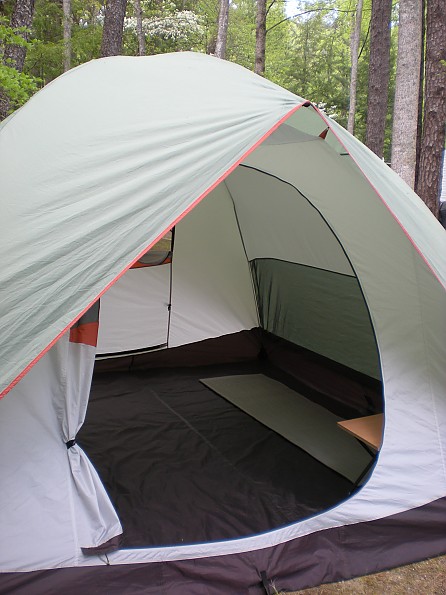 I've used this tent for camping for one fall and winter so far. I thought it was the best low price tent available. The ones from the big box stores may be a little cheaper, but they are too flimsy and shoddy to use at all. The Meramac's tent material is comparable to that of other tents available from outdoors stores.

I have two smaller tents tents for backpacking and plan to replace the Camp Dome 4 that was destroyed in high winds a couple of years ago, for weekend car camping. I bought the Meramac 6 for luxurious extended stays in one place and for traveling across country.

For one person, needless to say, it's huge, and would be quite roomy for four. Setup with one person takes a bit of working out, but can be done easily enough. For two or more people, it would be very easy, given the simple two-pole construction.

The two doors. For a tent this large, this is a necessity, since the things you alway find you need just after you've stepped outside are always on the other side. The fly overhang over each door is adequate to keep rain out for a tent of this type, i.e. without a vestibule.

The size, of course. I bought one this large so that I could stand up in it. I found after a few days of bending over even slightly in my REI Camp Dome 4, my back started to feel it. I'm 5'9" and have plenty of headroom in this one. Also it's nice to be be able to have just about anything I want inside the tent. The square shape makes arranging things simple.

The gear loft and side pockets. The loft comes with the tent, and is very simple to attach (although it does come off every time it's taken down and packed up). The side pockets are large and conveniently placed.

The number of places to stake the tent and the added security of 4 extra guy lines. I gave all these a work out the first time I used it: I set it up in Shenandoah National Park this past fall when a hurricane had just hit the coast. Winds were 50+ mph but with all eight loops on the tent floor plus all four guy lines staked out, it held up just fine. I never felt like the tent would collapse or blow away. It was also amazingly waterproof for that first night of sideways rain.

The things I don't like (but still consider reasonable tradeoffs for the price):

The floor leaks through wherever there is not a ground cloth underneath. I didn't buy the expensive footprint and have made do with a footprint from another tent and a large tarp. The foot or so that's left along one wall always has a small amount of dampness leaking through the floor. It's not the seams, but the floor itself that's leaking. It's not enough to wick into things, but will dampen anything left there. I'm looking into buying Tyvek and making a ground cloth to take care of this.

There are leak-points in the walls. These are the most problematic, since the water does pool and will soak into anything that comes in contact with it. These seem to come from the mesh seams and the door tie-backs, the places where all my tents tend to have problems. I have found that if I don't stake the sides pulled out in the middle and allow the fly fabric to rest against the tent walls, this cuts out most of the side wall leaking. Counterintuitive, but there it is.

For someone without a merit badge in knot tying, those guy lines are a problem when not in use. They hang from the side of the tent and tend to get in the way. Some kind of cord retainer would be nice.

Overall, I am very satisfied with this tent. I wanted a less expensive tent for my largest size, since I'll use it least often, and so far it's done very well.

Edited to add: It may be too late for this, but the 5-person tent might be better for fewer than four people.  I saw that it was available after I'd bought this one and set it up a few times. The advantages would be: fitting more easily into the smaller tent pads like those in Smokemont, Tyvek comes in 9 ft rolls so no ten X ten foot problem with making your own footprint, and it's slightly cheaper.

Otherwise, it looked like the exact same tent, including the 6 foot ceiling height. May not be available anymore though.

UPDATED June 18th, 2017: Per Alicia's suggestion, brought this update up from the comments:

The elastic in the poles breaks easily. Exactly one year after purchase (really, that very day!), the elastic in one of the long poles broke. REI considers this a wear item and won't restring without charge, so I got some cheap stuff from Walmart and restrung that pole. This last weekend, almost two years later, the elastic in the roof pole broke. I don't know how to restring that, since the ends have fixed caps on them, but that pole is the most bothersome to use without elastic. It can be done, just irritating. Still a good tent for the price, even with this.

I recently came across the insert that had come with the tent over two years ago and noticed Alps 100% guarantee. I was on the point of just getting rid of the tent.  Over the last year, the elastic broke in the remaining pole and that roof pole was especially problematic.

Two plus years for a tent this cheap wasn't bad, but I was very glad to find out when I called the number on the insert that Alps Mountaineering honored the guarantee 100%. They simply sent a whole new set of poles that week, no questions asked and no charge.  The elastic in the new poles even looks like a much stronger type.  Thanks, Alps  Mountaineering!

Thanks for the helpful review of your tent, Avid Hiker. I'd love to see some pictures of it in your review.

Sounds like a good tent, I really like both of my ALPS tents. I'm already planning on giving my Lynx 4 a good workout starting soon so I can write a review later.

I'm looking at Alps for my mid size tent after this one. Good to know you've had positive experiences with other Alps tents.

Alicia, I finally remembered my camera on my last trip with the tent, but don't see where to post pictures. Help!

Great! Thanks for sharing all of those, Avid Hiker.

For anyone still considering this or other Alps tents, I wanted to update my experience with this one.

Dang - "enter" is not "return". Update is that the elastic in the poles breaks easily. Exactly one year after purchase (really, that very day!), the elastic in one of the long poles broke. REI considers this a wear item and won't restring without charge, so I got some cheap stuff from Walmart and restrung that pole. This last weekend, almost two years later, the elastic in the roof pole broke. I don't know how to restring that, since the ends have fixed caps on them, but that pole is the most bothersome to use without elastic. It can be done, just irritating. Still a very good tent for the price, even with this. Apologies for the run-on style - if there's a way to start a new paragraph without hitting "enter", please let me know.

Thanks for the update, Avid Hiker. Good luck with that pole. You may also want to add some of that new info to your review.

I am able to put this tent up by myself. There is plenty of room in the tent. The tent doesn't leak. I would highly recommend this tent!!

Source: bought it new
Price Paid: I don't recall but it was on sale - I do remember it was a good price.