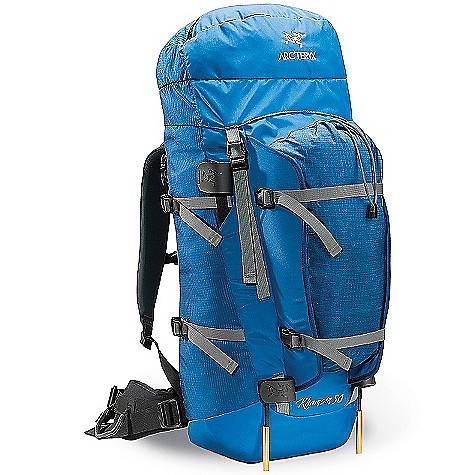 Suspension: Despite the pack's small size, its shoulder straps are thicker and more comfortable than those on my Gregory Wind River, which is twice as large. The Khamsin 50's hip belt would rival any expedition pack's hip belt in comfort - a rare attribute for a weekend pack! The pack's lumbar pad is about average for a weekend pack, though. For superior load control, the pack utilizes two stays instead of one. The pack is incredibly adjustable and the sculpted foam backpad is chanelled for ventilation.

Features: The best feature on this pack is the side access zipper which makes loading and unloading a snap. The heavy duty side zipper and the reinforcing side compression straps ensure that there won't be any blow-out disasters with this pack. Another nice feature is the zippered, external pocket that can be removed to reduce the pack's weight (4 lbs, 10 ozs.). The external pocket hinges away from the pack so that items such as a sleeping pad or rain shell can be carried externally; it acts very much like a Shove-It pocket, but it's much more versatile. The pack also features a pair of wand pockets large enough for water bottles.

Usage: If one packs carefully and carries a bivy sack instead of a tent and a highly compressible sleeping bag, the Khamsin 50 can hold enough gear to comfortably sustain a person in the wilderness during the spring, summer, or fall for four days and three nights. BEWARE that the bottom of the Khamsin 50 is tapered and that it will not accomodate a fat synthetic bag.

Craftsmanship: The craftsmanship on this pack is superior. The pack is MADE IN CANADA and it shows.

Complaint: My only major complaint is that the zippered, external pocket is a bit small.

A fabulous pack. Although many people mock me for this, I think it easily rivals the Dana Bomb (for the record, I am a huge Dana fan).

Backpacker gave it a perfect score and called it the best weekend pack -- I couldn't agree more. I bought the pack for one to five day trips in the Alps this summer -- it's definitely one of the best purchases of outdoor gear I've ever made. The pack is incredibly comfortable, and remarkably well designed.

A couple examples: the hipbelt, which is removable, pivots, so it moves with the hips. This is great for hiking, and fabulous when climbing, because it allows extra flexibility.

Also, the pack is extremely modifiable -- the aluminum stays and also the framesheet can be removed. I generally use just the frame sheet for day trips, and add the stays for longer trips. No frame sheet would be for the summit dash -- I haven't had a chance to try that yet. The shoulder straps and hipbelt are thermoformed, which translates into great comfort. I could go on and on . . . anyway, basically a very well made pack, with excellent materials and great design. And Arc'teryx stands behind its products completely. You can't go wrong with this one.