The Broad Peak GV has been discontinued. If you're looking for something new, check out the best mountaineering boots for 2021. 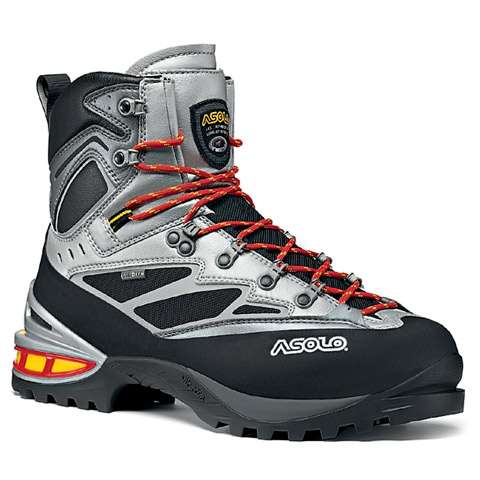 The Broad Peak GV is a pretty good boot for use on snow or ice. I have used them on Mt Hood, Mt Shasta, Mt Rainier, and for a snow climb on Mummy Mtn near Las Vegas.

They have been great except for the approach hike on Mt Rainier, which leads up asphalt trails for about a mile, before reaching the dirt/gravel trails below the Muir Snowfield. Stiff boots do not do well on hard surface trails, and these are just steep enough that it forces the heel to move around, which quickly gave me blisters. I stopped near the end of the pavement and applied moleskin, and put on a second pair of socks — anything to reduce the friction on my heels.

Fortunately, that did the trick. Once off the gravel trails and onto the snowfield, the boots were great, and I had enough traction to cruise up to Camp Muir without even considering putting my crampons on. My feet were never cold on any of my outings, including some cold/whiteout conditions on the Hotlum Glacier route on Shasta. Nor did they ever get too warm, even during sunny conditions on Rainier. They have always kept my feet dry as well.

They have both a toe and heel welt, and work perfectly with my Black Diamond Sabretooth Pro crampons. They lock up tight and the stiffness doesn't allow them to flex off, even during front pointing or kicking steps.

So if you need a mountaineering boot that is going to be used almost exclusively on the white stuff, these will be fine. But if you have an extended approach on dirt/rock (or especially on pavement), you might want to consider carrying some approach shoes, or pick a more forgiving boot.

Blisters yes. These boots are the right length and seam to fit, but my heels get blisters.

I use them for ice climbing. Now I hike with other boots and carry them in my pack. I really only use them for vertical climbs. I am thinking about selling them on ebay since they are like new.

I am going for the Kaylands next since my Kayland hiking boots are so awesome. Sorry for the bum review.

I read the previous review and I don't think it's fair to rate a boot poorly simply because it doesn't fit you well. I've had these boots over a year, have put well over 250 miles on them, used them on snow, ice, rock, and dirt.

They're fine on trails (a little stiff though), excel on class 3 or 4 terrain, and have been fantastic on steep snow (couloir) climbs here in Colorado. I've used these boots for just about everything and have really tested them on some tough terrain and have not a single complaint, not to mention I've never even gotten a hot spot let alone a blister.

Fit is different than performance, this boot performs very well in a variety of conditions, and has proven to be durable, with a nice sticky sole, great ankle support, and great crampon compatibility. I love this boot.

I have a mid volume foot, size 9 and medium width. This is the 4th pair of Asolo boots I've had. FSN 95, Fugitive and Distance. Asolo boots have fit my foot better than anything else. I climbed the Grand Teton in my FSN 95's. Love their fit.

I bought the Broad Peaks to wear when I go climb Rainier this July. I bought them for the fit that has been great, they look like they could take a beating and I've just had plain great luck out of Asolo boots.

I've got about 25 miles on these boots now. I hiked up Mt Sterling in GSMNP this past weekend. I have not had a hike where I didn't end up with at least 2 blisters on my feet. I currently have 5. I don't understand what is going on. I've used liner socks, custom footbeds, moleskin... these boots are chewing my feet up every time I wear them!

I'm really disappointed with the fit. Now I'm going to have to get new boots or rent. $280 down the drain.