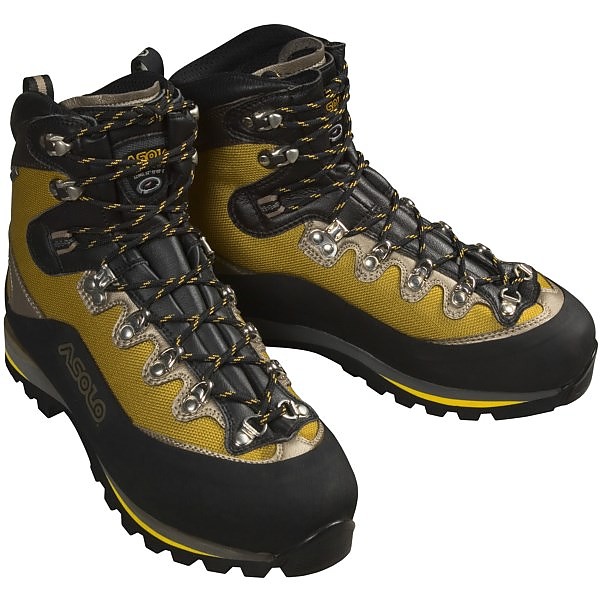 Having read the earlier reviews about the Titan falling apart I bought them at REI to ensure I could take them back but was initially pretty pleased with them. Had used them for about 10 mountain days (longer than some listed below), mostly on snow, and they held up well.

However, one week into guiding with them, using them everyday and often step-kicking into scree, snow and ice a quarter-sized hole opened up in the rubber toe, exposing the yellow nylon fabric underneath. Repair hasn't stemmed the widening hole and although they are still waterproof and the nylon has held up so far, I can't imagine it will hold for much longer.

Unfortunate that they couldn't stand up to normal mountain environments for more than a couple weeks of use because I really liked them. Maybe Asolo will beef up the toe on future boots.

I bought the Titan from REI because the La Sportiva Trango S did not fit. I've had past problems with Asolo products, but took the chance. I've used the boot for 15 or so days of rugged mountaineering, including the Redbout High Route/Ruta Lake High Route last year in a low snow year. The boots are the most comfortable mountaineering boots that I've owned in 20+ years of climbing, and they perform very well on all surfaces, i.e., snow, w/crampons, scree, steep heather, 3-4 class rock. So far, they are holding up well, but time will tell.

I have now used the Asolo Titan GV for roughly 50 full days of mountaineering, and the boots have performed and held up quite well despite some abusive travel and notwithstanding others' experience with failures. I screwed and cemented a supergaiter on the boots, and they have become my early season mountaineering boots. (I'm using the Scarpa Escape GTX for late season mountaineering). The Titans have been the best all around boot I have used in my 20+ years of mountaineering. Perhaps I've been luckier than others.

So, I called Asolo and they told me that they had discovered that boots were failing in the field and had re-designed it slightly. They gave me one of the newly re-designed pairs and it has lasted a whole season so far. If it lasts another 1-2 seasons I'll call the whole experience a sucess. But, if not, I'm going back to REI to get my money back!

The boots fell apart after only nine days use. Asolo called it pre-mature wear out. When I took them back to the retailer another person had the boots for two days only and they started to fall apart. Don't waste your money on this boot or any other Asolo product.