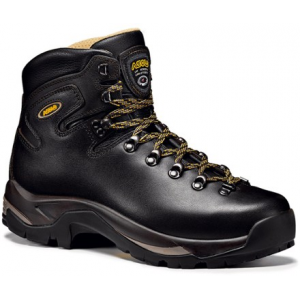 Soles of both boots literally disintegrated!

After light trip I noticed that these boots started breakdown strangely. I never saw this on any shoes I had, especially those designed for hard use. Soles were coming detached as well.

I can't ask any retailer to fix my problem. So I wrote a message directly to Asolo two months ago. I was redirected from U.S. to Italian offices. The last one couldn’t do anything and stopped responding to my messages three weeks ago.

Looks like its customer support has the same quality as its shoes. It was my first experience with Asolo and I am completely upset with it.

Not durable at all.

These boots failed me after four uses. The soles separated from the rest of the boot. Asolo would not honor their own manufacturer's failure. DO not buy these boots or any other products from Asolo.

Love this boot. Very sturdy, comfortable and waterproof with a smooth lacing system. Grips like a gorilla to rock, mud and roots.

This boot has clearly been engineered to perform as a solid and durable hiking/tramping boot, and that's where it excels. I found them very easy to wear with virtually no break-in time. I took them on a wet overnight trip and came out with zero blisters or rubbing of any kind.

The Asolo TPS 520 GV boots fit like a glove and were the most comfortable pair of boots I had ever worn right out of the box.  I could not wait to get them on a trail with four days worth of gear in my pack. So, I took a 9 hour drive to World’s End State Park to hike part of the loyal sock trail.

The boots made my 38 pound pack feel lighter and off I went into the trail. The problem began to show when I met the first challenge of navigating some rocks along a stream.  I slipped several times on rocks that were not even wet, but moss covered. I thought it strange, but figured it was me just getting going with a pair of boots needing some break in time.

But, once the rain began the problem became obvious and it was not me or anything that break in time could fix. I fell twice on flat rocks with my feet just flying out from under me as if I were on a ice covered lake!

I cut my first day goal short and set up camp to wait out the rain.  The next day it was still very wet and after two more close calls along more dangerous terrain I decided to give up the hike and came home two days early.

The bright side of this story comes from the service I got from Oregon Mountain   I spoke to a supervisor named Robert and he agreed to take back the Asolo boots and replaced them with a pair of Scarpa SL M3's. I would and will do business with Oregon Mountain again.  Although, I was sad to send the good fitting Asolo's back, I could not have boots that gave me no confidence on the trail.

I think the problem is with the shock absorbing piston like device that is made out of a hard (slippery) material, but that is just a guess.  I do hope Asolo can fix this problem while keeping the great fit and function.

Great boot. It took no time at all to break in. It is durable, and has great ankle support. I feel invincible in these things. They are a bit on the heavy side, but I wouldn't give up the weight for the support, durability and comfort these boots give me. They are too heavy for a day hike. Overall very nice!

Comfortable and supportive boot is let down by a soft and delicate midsole. Outsole delaminated before it was in need of replacement. Resoling requires expert cobbler.

Very comfortable and supportive boot, but the new "athletic" style layered midsole does not hold up to abuse. I have owned several pairs of Gore-Tex Asolos, and was impressed by this boot's initial comfort and adjustability.

I abuse my boots, but the previous pair took nearly 10 years of monthly hiking, packing, and trail work until the soles were worn smooth... at which point I passed them on to a friend in need.

This pair of boots has seen similar conditions but has only lasted two years before the outsoles delaminated and needed resoling. The resole requires a complete removal of the soft midsole, so they must be sent to a cobbler who knows their stuff. First place I sent for resole only replaced the outsole, and did not strip the midsole, so the outsole is again falling off the midsole.

Guess I will have to send these away again for proper resole.