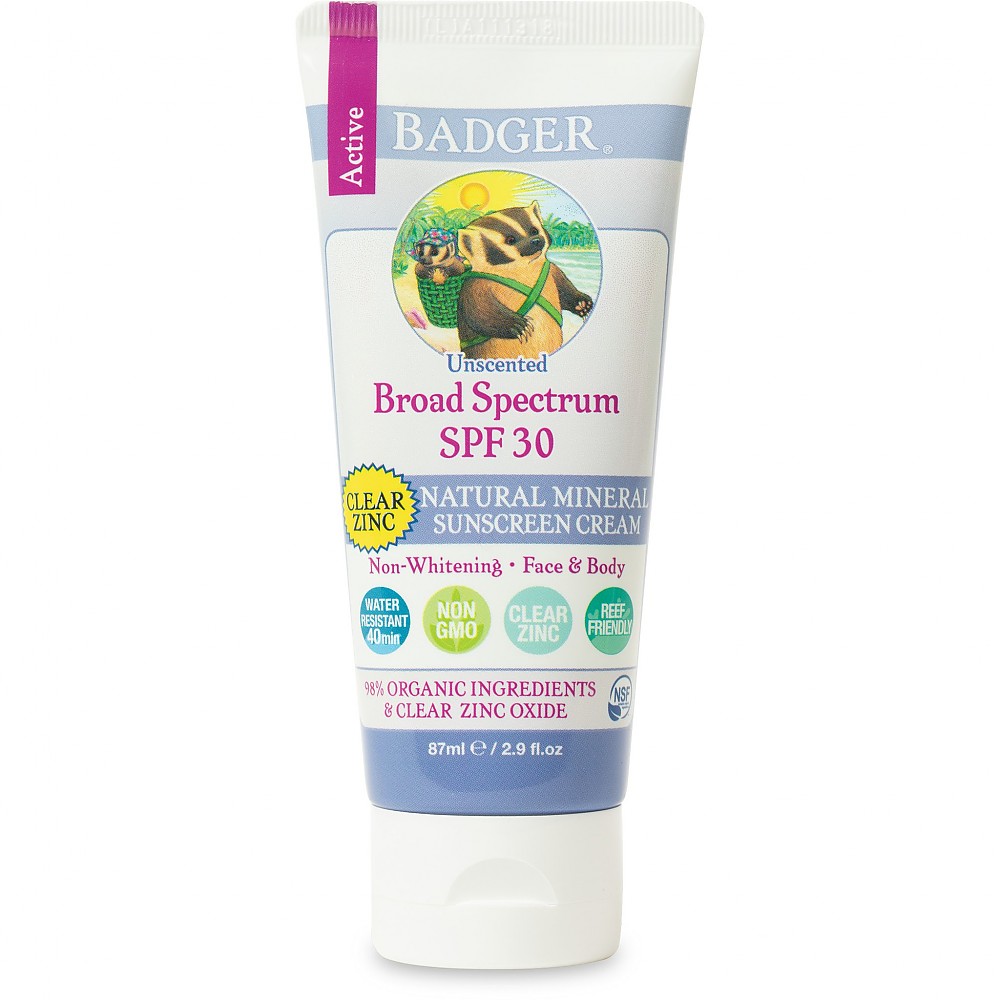 Mineral-based sunscreen in an effort to avoid chemicals—98% organic, active ingredient is "clear" zinc oxide. Inactive ingredients are things like beeswax, sunflower oil, good moisturizers. On the plus, it does not sweat off and provides good sun protection. On the downside, it can feel greasy and a chore to wash off.

A while ago, I started experimenting with natural sunscreens. I read an article that suggested the staple sun-blocking chemicals aren‘t very healthy for one’s hormonal health. I tried a Badger sunscreen and reviewed it on Trailspace; it blocked the sun well but was very goopy and made my face very white and had a propensity to stain clothes.

I read that Badger was selling a comparable sunscreen, but called it "clear zinc." I figured it was worth a try.

As you can see, the sunscreen is SPF 30, and the claim that it’s natural and mostly organic appears to be accurate. Although it comes out of the tube white, it rubs into skin with relatively limited white/zinc residue remaining on the skin. That is a big improvement over the white zinc version. The clear zinc version is also less sticky/sludgy, so it is easier to apply and rub in.

I have worn this sunscreen during a number of recent/steamy hikes, and it does not easily sweat off or run into my eyes. It also doesn’t stain hats or clothing. So far, I haven’t  burned when I used Badger’s clear zinc sunscreen and applied it in advance and in a reasonably liberal quantity.

There are negatives. Badger’s clear zinc feels fairly slick or oily after it is applied, and it’s a real pain to wash off, even after a long day in the sun. That may be a plus for keeping you from getting a sunburn, but it’s not ideal.

I have not yet had an opportunity to test this sunscreen in the uniquely abusive environment of hours on a sandy beach and in the ocean surf. I’ll update this review after a week at the beach at the end of June.

It’s worth addressing cost. I felt that i had to pay a premium price for this sunscreen compared to the very effective chemical-based Rocky Mountain sunscreen that has been my staple for years. Fifteen dollars for a 2.9 oz. tube, compared to about $42 for a 32 oz pump bottle of equally effective and very waterproof sunscreen.

Thanks for the timely sunscreen recommendation, Andrew! I used Badger quite a bit when my kids were little, but it was sometimes hard to find and could be messy, so I'm glad to hear what you think of it now. FYI, I've most recently bought mineral, reef-friendly sunscreens from All Good and Sun Bum.

The Best First Aid and Hygiene

Trailspace's community of gear reviewers has field-tested and rated the top first aid and hygiene.