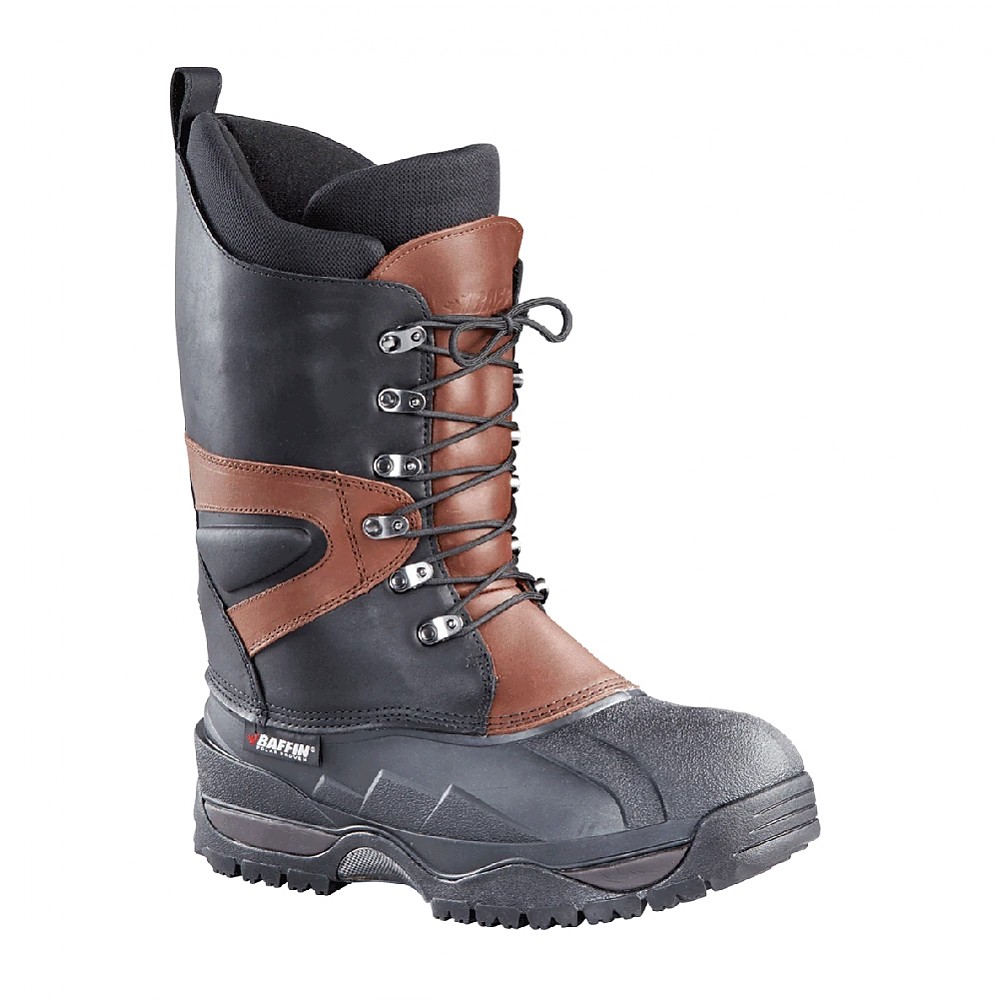 I don't have a photo of these and no longer own them, but I used them in the Arctic for three years with fairly good success. The only times they failed me were when standing long in one spot by a seal hole in the coldest times in dark season (below -45°C). In these cases the issue was easily resolved by local Inuit trick of standing on a winter caribou fur mat.

I now own the similar Epic boot and love it, but needed two sizes up to avoid cutting off the circulation. Be aware that these types of duffels do constrict feet heavily, which leads to them getting cold regardless of insulation.

On one long trek when I was stranded at Beechy Island, I had to walk 3.5 days back to Resolute Bay in these. I didn't have spare duffels with me . The boots got me home but it was the end of them. The heels wore through and there was some seam separation in the shell.

The snow conditions were awful, in all fairness, and made from ice crystal accumulation and at that -25 to -30C sun-just-returning temperature where they were like walking in deep loose sand. Any polar trekker will understand how difficult and wearing these conditions are.

I bought these boots out of frustration with all the other boots I have purchased in the past. I need warm boots because I live and work in the Arctic, but have never been able to find something to keep my feet warm for very long. Finally, I bought these and was surprised.

The Baffin Apex appear to be a modern version of the old rubber bottom leather top shoe pac that has been around for decades but with a significant increase in insulation.

This is a very large boot in that it is rather clunky and heavy, but I guess that is the result from so much insulation. The liners, which are removable, seem to be made out of a bi-componant foam product that do keep my feet warm while moving around at temperatures of minus 40°C or so. The inner layer is closed cell foam while the outer layer is open cell. There is a radient heat barrier on the outside of that followed by a layer of mesh overall. Beneath the liner are two more insoles; one is a foam mesh resembling honey comb material. This is followed by another solid foam layer with a radient heat barrier. I would not buy a winter boot that did not have a removable liner.

They have a temperature rating down to -100°C but I strongly doubt that. Of course, very few places on earth reach that extreme. However, although the liners breathe the rubber bottom does not and moisture builds up inside. The one good thing is that they are waterproof, to a degree, if you happen to go through some overflow. Even in the coldest winter temperatures in the Arctic, I have encountered open water. I tried these out with vapour barrier socks with good results.

The leather uppers are good and thick but take a little time to break in to my liking, but they do seem to be rugged enough for many years of use. Triple needle construction is used to attach the leather uppers to the rubber bottoms. However, the leather tops do not extend above the insulated liners. This causes snow to encrust on the insulation.

The traction is nice. I have had many boots in the past and none have had as good traction on ice and snow.

The laces are alright but do not really allow you to tighten them up at the calf level, so if you go through the ice you will get a boot full of water.

One general complaint; I wish manufacturers would stop using terms like Arctic Flex, Polar rubber, Thermoplush, etc. I know these are trade names for proprietary materials but I'm not sold on fancy names. Just give us the facts.

Overall, these boots are warm, if heavy, and would be ideal for more sedentary activities such as ice fishing or snowmobiling. For winter hiking, day after day, a lighter, if less warm, boot would be better.

Source: bought it new
Price Paid: Under $200 on sale