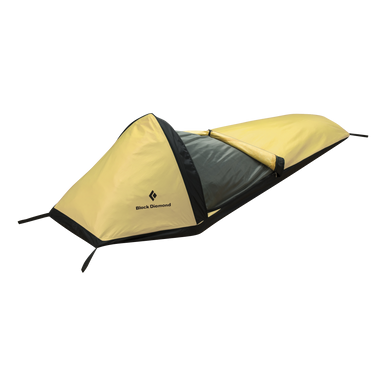 I owned a Bibler Hooped Bivy but am claustrophobic and so moved up to a Bibler Bipod Bivy, which I used in California's Sierra for several years.

I had also got very sick of how hard it was to get a sleeping pad and sleeping bag into the Hooped Bivy or any other ordinary bivy that loads only from the top.

As bivvies go, the Bipod with its side-zip entry is vastly easier to enter/exit than ordinary, "top-loading" bivvies. It's also easier to get pad/bag into, too.

When the head of the bivy is properly pitched out, the single pole really does a fine job of staying in place -- even with me, a serious tosser-and-turner, in it.

I wish Bibler would put a little stash-pocket in the bivy. I sewed a small mesh stuff-sack into the bivy to have a place to stash quick-retrieval items at night (flashlight, glasses, etc.) and that stuff that wanders off so easily (lip balm, watch, etc.).

The Bibler Bipod Bivy kept me cozy and dry for several seasons, even though it was a tight fit, especially when I crammed all my gear into it. After I seam-sealed it, the only time water ever go into it was when I got in and out in the rain.

I had space enough to read while lying on my stomach and propped up on my elbows, though my head did rest against the top.

There was enough ventilation that I was comfortable on warm evenings.

But I still wanted more room, so a couple of years ago, I got a Tarptent Virga, which suits me and my claustrophobia much better. Really, there was nothing wrong with the Bipod Bivy!

Note that Bibler is now a subdivision of Black Diamond, and you'll find the Bibler products on the Black Diamond web site.

Design: Three-plus-season bivy sack
Sleeps: 1
Ease of Setup: Hard to get the pole into place and to tension out the bivy's head properly. Don't bother anchoring the foot; if the head is anchored properly, the foot isn't going anywhere.
Weight: 1 lb., 13 oz. (per current Bibler web site)
Price Paid: $250

Trailspace's community of gear reviewers has field-tested and rated the top bivy sacks.