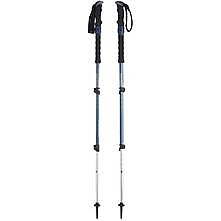 Most comfortable, lightweight trekking poles I have ever used. No slippage whatsoever with their awesome locking mechanism.

The hand straps are adjustable and wider, much more comfortable then others I have owned. The grips are very comfortable, which is what makes them great as I have some issues with my hands aching after a long hike. So far none with these.

Once you adjust the pole length the locking mechanism holds tight with no slipping or readjusting necessary. The shocks work great and I really like the smaller baskets. Makes for a nice slim pole. Good grip on the tips no matter what the terrain.

I have always used a different brand and received these from a friend who told me about the comfort in the hand grips, I have used them for a couple of months now and I am very pleased with them. I would highly recommend.

Update 10/14: Have used all summer and they are working great and still just as comfortable.

Source: received it as a personal gift
Price Paid: $69.99 on sale

I have been looking for a set of trekking poles for some time now. My concern is that I am not a slight fellow and I tend to put a lot of wear and tear on my equipment. Not abuse just very hard use. The first hike was approx eight miles give or take.

My first outing with these poles was on a fairly established trail, with good elevation changes (500 feet+) and terrain feature changes (rock, clay soil scree and deep wet leaves), along with some 'bushwhacking' off trail.

I found the adjustments very easy to set. I did not change on the fly. The flip locks held firmly the entire hike. I checked the marks at the end of the hike and found no slippage.

These poles have "control shock technology" to absorb shock and cushion the arms on the hike. I found these poles really transferred trail feel nicely even with the shock system. I found I could feel the difference in the trail through the poles. The shock system did not rob energy when climbing steep banks or when briskly walking/jogging. I found the poles had minimal vibration. I mention vibration only because at first, I was surprised by the slight vibration, not having used poles for trekking prior to this. Within five minutes the vibration was not noticeable.

The grips are nicely sized and comfortable. I have larger hands and the grips did not feel too small. The wrist straps were comfortably padded and rode nice on the hand. I used the 'through bottom' method of wearing the straps to support the bottom edge of my hand so I can put downward pressure and not hold the pole tightly and still get great support and energy transfer. My hands were not fatigued after the hike. I found the strap adjustment would loosen slightly, which required adjustment. But, I was putting a lot of weight against the straps.

When off trail the poles worked very well. I was concerned once as I was traversing some rocks and had enough lateral lean that the pole flexed and I thought I was going to bend it. But, the poles flexed nicely taking my weight and performed beyond expectation.

These poles have the carbide tip. Which to my surprise bit into all terrain features. When 'bushwhacking' the hill side and stepping on fallen logs the tips bit nice. Even on the rocks there was almost zero slip. On the trail bit the dirt nicely and came out cleanly.

Broke my Contour Elliptics, so I decided to try the Contour Elliptic Shocks - on sale now. I was and am already sold on the flik-loc mechanisms as being the best in the business. The "shock" part of these poles, much to my surprise, is a definite improvement. It definitely dampens down the vibration and noise. I'm impressed.

I think these poles are the best out there, plus they are on sale for as low as $77 - an absolute steal compared to what else is out there in quality trekking poles. Oh, and as for breaking my previous pair, I beat the heck out of my poles in the winter on snow and ice - not Black diamond's fault. Get 'em!! 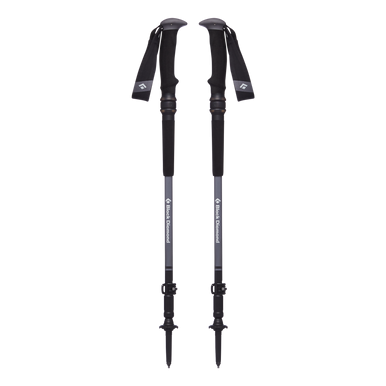