Brooks-Range is no longer in business, and the Scientist 35 Folding Snow Saw has been discontinued. If you're looking for something new, check out the best snow saws for 2021. 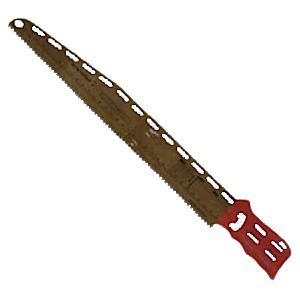 But I seem to have found one that is just right. The Brooks Range Scientist 35 is no my go-to saw.

My favorite feature of the saw is that it folds. This gives me a full-sized saw, yet it stows in the pack nicely. I really like this because I don't use a saw on every trip, but when I need it, I want it to work. I actually use its case to carry nearly my entire snow science kit - density gauge, crystal card, thermometers, notebook, loupe, etc. It's a pretty small package.

The downside of the folding feature is that you more than likely have to take your glove off to close it. But, it only takes a second.

The saw is rigid enough to cut straight throw dense snow. You probably wouldn't consider this, until you use a flimsy saw. I point this out, because in photos it looks a lot like those flimsy saws. But it's not. It's made from high-quality, American steel, and will get the job done.

For cutting larger blocks and columns, the saw can be attached to a ski pole by using a ski strap. While this is less-elegant than some other systems, it is more versatile. You can use any pole. This is nice.

Lastly, the saw is laser-etched with a grid so it can be used as a crystal card. This is pretty great because you can just use the saw to pull out grains at suspicious layers - fast!

I see that as I write this review, it's listed at over retail price. Why not by it directly from Brooks Range?

The author of this review was a brand ambassador for Brooks-Range.