The Vapor AF has been discontinued. If you're looking for something new, check out the best liquid fuel stoves for 2022. 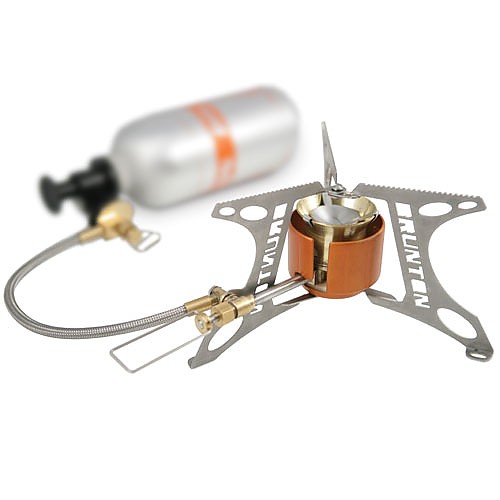 I'm very pleased with this stove so far. I have over 40 years experience backpacking, beginning with the Svea 123 and later the MSR 9a stove. Since those days, I've used every MSR stove made as well as numerous stoves of other brands. My current favorite stoves are the Brunton Vapor AF and the MSR Reactor, both of which supplant the Optimus Nova+ in my affections.

The Vapor AF is a true multifuel stove burning both an Isobutane/propane mix (70/30) from any standard fuel cartridge with a lindle valve (MSR, Brunton, etc.) Changing the fuel preference of the stove is as simple as rotating the burner cup. The fuel control valve extends from the burner cup through a slit. One end of the slit is stamped with the letter G (for gas) and the other end is stamped with the letter L (for liquid.) Just rotate the fuel cup until the control valve is resting against one of the two letters, depending on your fuel choice.

The burner design is the standard roarer type so it makes a lot of noise, even burning butane/propane. Maintenance of the stove body is very simple. It only requires cleaning of the burner jet occasionally. There is no shaker needle inside the burner jet so you have to clean the jet manually with a pricker supplied with the stove. It is long and easy to hold so it can be maneuvered even with gloves quite easily.

The flame spreader plate sits atop the burner cup and is held on by three retaining arms in the standard design for a roarer burner. There is a slight variation in this stove in that the third arm does not clamp tightly around the burner cup. Instead it extends outside the inner burner cup and attaches to a permanently mounted spring retainer on one stove leg. That holds it firmly in place during use, but also allows quick detachment if you have to remove the flame spreader to get at the burner jet. A multitool is supplied with the stove that acts as a screw driver if you actually have to remove the burner jet for cleaning. Other than that, there is a screw on the bottom of the stove which will allow for complete disassembly of the stove body.

The stove has three legs/pot holders which rotate into place 120 degrees apart. They are serrated on top to help retain cookware that has ribbed bottoms. The outside diameter of the circle described by the outside edges of the three legs is 8 inches so the stove is steady even on unlevel ground and will hold pots of up to about 12 inchs in diameter with no unsteadiness.

The fuel line extends from the fuel control valve to a connection that may be directly screwed into a isobutane/propane cartridge or into the fuel pump. The fuel pump is constructed of a sturdy plastic that looks considerably more robust than the plastic MSR pumps that I've delt with for years. It's also much more maintenance friendly.

The plunger assembly is held in place by two sturdy detents. Rotating it about a quarter turn will allow you to remove the plunger from the pump. Unlike most other pumps, there is no leather cup to keep lubricated at the bottom of the plunger. Instead there is an enlarged portion of the plunger which holds an o ring that rides against the sides of the plunger well. This design is inherently more efficient than the old pump leather design and can move more air at a higher pressure. It is the same design as used with the piston for the Katadyn Pocket water filter that lasts for years and years and has a lifetime warranty. Lubricate that o ring with a little grease or vaseline every year or two and you should have plenty of pumping power.

There is a single screw that fits through a metal retainer on the pump. Removing that screw with the supplied multitool will give you access to the inpump fuel filter if you need to replace it. It also gives you access to a couple other orings that are a part of the attachemnt point that the fuel line screws into.

Fuel ignition is facilitated by ignition ports placed around the bottom of the burner cup. Just hold a match or lighter to one of them and the fuel will ignite without you having to get your hand near the top of the burner cup where you might get burned. Turning off the stove is a matter of just shutting off the fuel valve if burning gas. If burning liquid fuel, turn the fuel bottle over and the fuel pump will use the remaining pressure in the fuel bottle to pump air through the fuel line into the stove effectively clearing the stove and fuel line of fuel and turning off the stove and simultaneously relieving the pressure in the fuel bottle without having to unscrew the pump from the bottle and getting sprayed with fuel in the process.

The two sides of the pump are marked Off and On so you know which way to turn the fuel bottle to pump up pressure in it or to relieve pressure and turn the stove off. The fuel line/fuel bottle attachment point is articulated to allow the rotation of the fuel bottle without creating a fuel line torque that might overturn the stove before it's out. Fuel may be safely carried in the bottle with the fuel pump in place since there is a check valve inside the pump assembly that prevents the leakage of fuel if the stove and fuel line are detached from the pump.

So far, I've used white gas and isobutane/propane cartridges to fuel the stove with no problems. I haven't tried kerosene or any of the heavier liquid fuels yet as I tend to use them in emergencies only since they contribute so much soot to stoves and cooking pots. I tend to use stoves at full throttle so haven't really tried to simmer yet and can't speak to this stove's ability to do that. However, using gas fuel, simmering is theoretically possible even using a roarer type burner.

The stove comes with a nylon stuff sack with drawstring closure. The sack has an interior zippered pocket to carry the supplied stove instructions and the small repair parts kit that comes with it. The repair parts kit includes the multitool, the jet pricker, an extra fuel bottle oring, extra pump plunger oring and extra orings for the fuel line attachment points and two extra fuel filters.

The pump and a small size fuel bottle also come with the stove. The stove also comes with a foil windscreen similar to those provided with MSR liquid fuel stoves except the foil this windscreen is made from is much heavier than its MSR counterparts. It is somewhat more difficult to bend into a round shape for use, but it is heavy enough so that it doesn't get blown around by the slightest breeze and therefore performs its function much better than its MSR counterparts.

For those that are so inclined there is also a maintenance kit that can be purchased separately. That includes all of the above maintenance parts that already come with the stove plus an extra multitool, flame spreader, fuel jet, jet pricker, grease to lubricate the orings, extra fuel inlet tube for the pump, extra air tube for the pump and replacement wicks for the burner cup.

This is a great stove. Easy to use with great simmer control. I only have used white gas and purchased it so that I could do some real cooking on the trail besides boiling water. It can go from jet engine fast to a low simmer with no problems. It is durable.

I bought this stove so that I could do some real cooking on the trail. I did have a Whisperlite which I had used for 20 years, but it had only one speed, jet engine fast. This was on sale and I liked that you could use a multiplicity of fuels and that you could simmer with it.

To date, I only have used white gas, but it works perfectly in cooking foods. It will go from jet engine hot to a low simmer with just a turn of the knob. It is ideal if you want to do more than boil water.  The construction is very durable.

UPDATE 11/2017:  I hadn't used the stove for a couple of years and wanted to check it out for some snow camping this winter. The last time I used the stove, I took the pump apart and coated all the O-rings with silicone grease. I pulled it out, prelit the stove and then fired her up. It worked just like new. No leaks and would go from a low simmer to jet engine fast. I'll take the pump apart again tonight and coat the O-rings with silicone grease again and I think that should allow me to keep it for awhile longer.

I've had it for over 10 years now and it seems to be in pristine condition. It can use a multiplicity of fuels including gas, but my fuel of choice is white gas. It just is like brand new and with proper care. I think that it should last until I can't backpack anymore.

Buyer beware! Recently purchased the Brunton Vapor AF stove. Was impressed by the claim of adapting from liquid fuel to canister fuel with the twist of the ring surrounding the burner assembly. Advertising hype stated that it was the next step in stove design from the Brunton/Optimus Nova.

What the advertising hype does not tell you is that with the exception of the conversion from liquid to canister fuel (a trick which the Primus Himalaya Omnifuel has been able to do since 1998) this stove is a significant step down from the Nova and from the Primus Himalaya. Specifically, the fuel pump is primarily plastic, with a very flimsy plastic plunger. The fuel lines which attach to the pump and sit inside the fuel bottle can easily be pulled out with your fingers ... and just as easily drop into your fuel bottle! There is no cover on the pump inlet valve to keep dirt, water, etc. out of the pump assembly. Oh yes,the threaded brass inlet valve is surrounded by a plastic screw-down assembly ... sure to work well in cold weather with freezing hands!

All in all, this stove may be new, but it is certainly not better than its predecessor or its competition. Rather, it seems like an attempt to save on manufacturing costs while living on the reputation of the Nova.

vote up
-4
vote down