The Weathermaster Screened Tent has been discontinued. If you're looking for something new, check out the best warm weather tents for 2021.

I bought this tent a few weeks ago at Costco for about $150. I've set it up three times. The first time was just a quick "rehearsal" in my yard to get a feel for it before going camping.

The second was at the camp site. Within an hour after set up, we were informed by a Park Ranger that we were under a Tornado Warning until later that evening. Shortly afterwards, the wind picked up and it began to rain. We went into the tent and started to settle in for the night. The rain got very heavy and the wind got so strong that water was blowing under the rain fly just above the door. This lasted for about an hour and a half but the tent weathered the storm without any problems. A tornado actually did touch down in an uninhabited area a couple of miles from where we were.

The third time I set up the tent was in my yard a few days after camping to clean it off since it got a little muddy from the camping trip. I checked the weather forecast the day before and it was clear but, within an hour after setting up the tent, another Tornado Warning. It must be a coincidince but I find it strange that the two times that I have had this tent set up for more than an hour, we were put under a Tornado Warning. Hmmm.

This tent is quite large, although I don't see how you could sleep 10 people in it without being on top of each other. It is better suited for a family of four if you want to use your "screened porch" for a porch.

The tent is very sturdy, as it handled the intense thunder storm without any problem. The bottom of the tent could be a little thicker so I would recommend putting a tarp under it before staking it down. I would recommend this tent to a friend.

The only thing I don't really like about this tent is that it has metal poles instead of fiberglass. I've never been a fan but they do seem to be very sturdy.

We used this tent from KS to ID to CA and in LA the only problem was a very high wind in KS that got under the screen porch and pulled the stakes out of the ground. I was using Coleman nail type stakes. This tent with two people and cots is full; it would hold more on the floor. 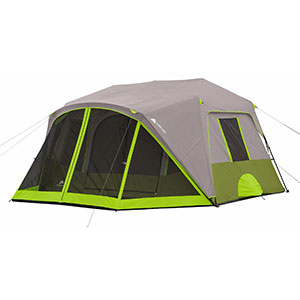