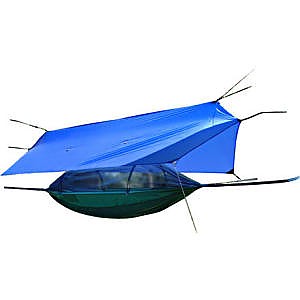 I tried it for the first time in the Adirondacks' Indian Pass on April 14. There was still subtantial snow on the ground up there. It rained during the night. All of my buddies were using Hennessies. I stayed warm, dry, and comfortable.

I liked climbing in from the edge rather than up through the bottom as done with the Hennessy. I also liked the extra space supplied by the hoops and the tarp being tied above the hammock and not on it. I didn't experience any of the problems I've read about with the arched tent poles. The hammock sets up just as easy, if not easier, with the straps. The tarp, however, takes a bit more time with all the cords to tye off.

My buddies were also happy with their purchases. We all slept comfortably.

I purchased two of these on Ebay from bear.creek.sports.

I had the Hennessy Hammock Ultralight and camped in it here in Hawaii everyday for about eight months. I believe it would not have self destructed if I hadn't constantly sprayed it with insect repellent.

One problem I had with the Hennessy was that the tarp was noisy. There are only two pullouts on the side, which makes it easy but leaves areas that can flap so loud that it made me jump on several occasions. Another problem was that I couldn't reach out of the Hennessy and reach my hanging food, radio, clothes etc. One has to completely get out of it to access anything outside. I eventually cut an opening so I could reach out, but this was only a slight improvement.

I ordered the Crazy Creek Lex as I liked the idea of the top unzipping. Because the top opens I can unzip and swing my legs over in a chair position for eating, changing clothes, and sometimes just reading or hanging out. I don't have to put shoes on as I did in the Hennessy, which by the way was another problem with the Hennessy. Stepping out of the Hennessy meant shoes. Shoes that were outside of the Hennessy. Somehow get shoes in, put shoes on, step out.

The CC Lex is so much easier and livable. The two aluminum spars that hold the mosquito net up and give the impression of a huge amount of head space was an improvement on the Hennessy.

The CC Lex tarp has several points at which it can be guylined. A bungee cord on one end keeps it very taught. The rubberized material is the quietest tarp I have ever had. And even though it doesn't match the speed or lightness of the Hennessy tarp, it is almost perfectly quiet even in very high winds. The ends have an extra flap that get guyed in a downward position and block both wind and rain.

After using the CC LEX everyday for about six months I have to say unequivocally that despite the slightly heavier carry, it is my favorite way to sleep.

The quality is first rate and I feel it is of slightly better materials and construction than the Hennessy. In my opinion the design is far superior.

Design: Camping Hammock
Sleeps: 1
Ease of Setup: Easier than clearing the ground for a tent.
Weight: Heavier than the Hennessy Ultralight
Price Paid: $50 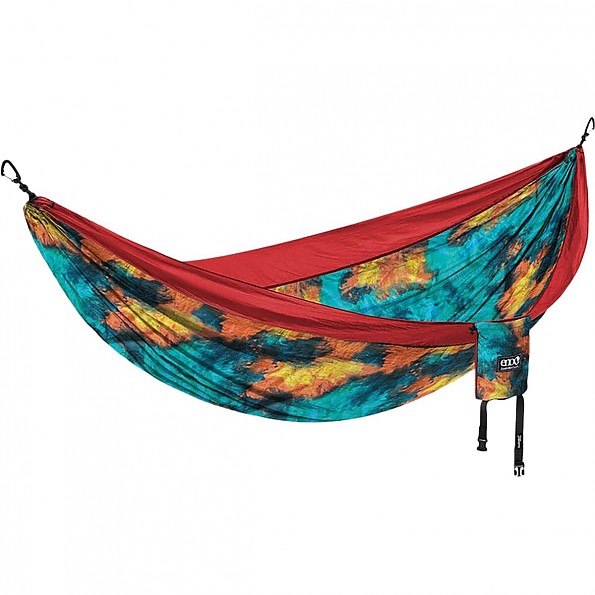 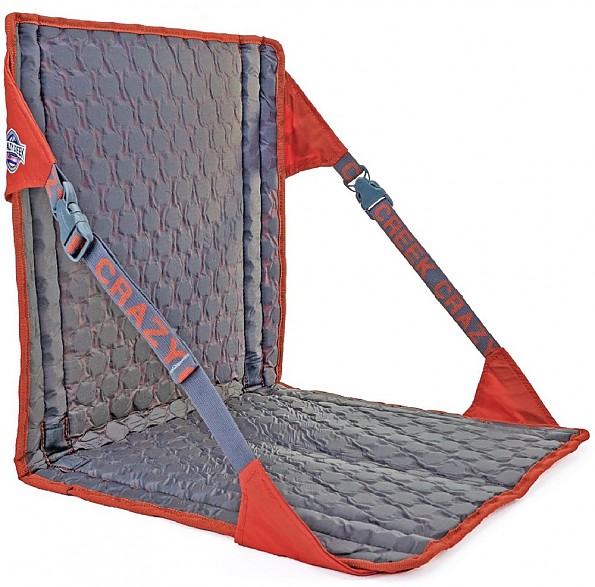