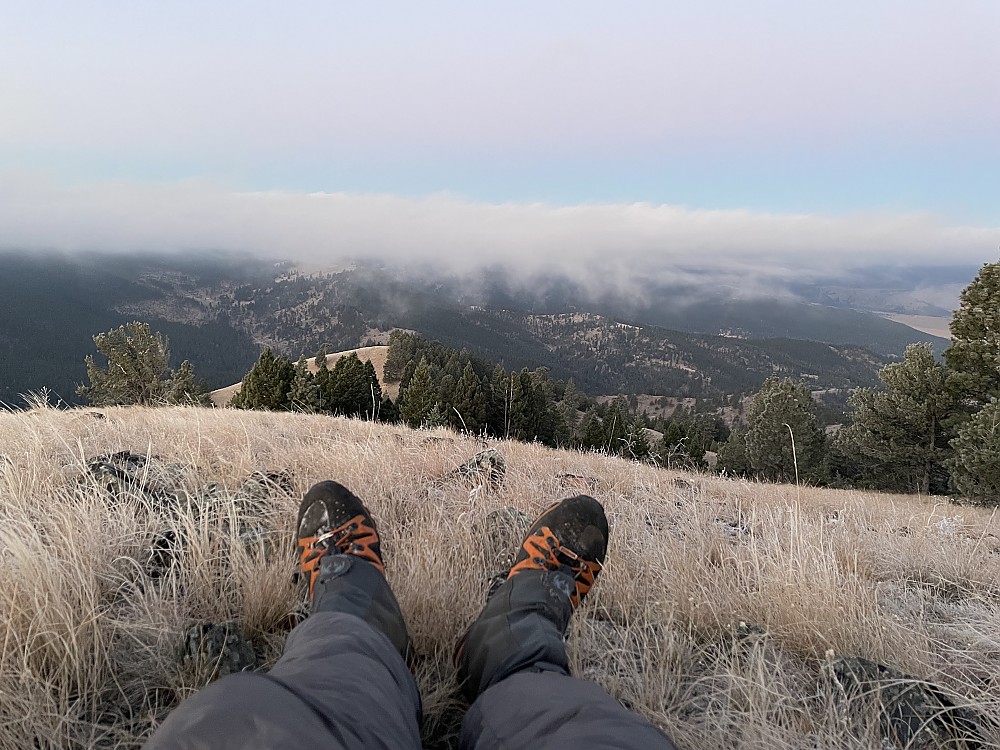 A stiff, but relatively lightweight boot. Suitable for very rough terrain, off trail and with heavy loads.

I have several hundred very tough miles on these boots, mostly big game hunting, but also a few multi-day snowshoe trips. These are NOT the shoes I'm going to grab for general backpacking; I wear trail runners almost exclusively for that. But for very rough terrain, generally off trail and normally with heavier loads (sometimes north of 100 lbs when successful big game hunting), these are the shoes (boots) I grab.

Crispi is an Italian boot company who have concentrated on the US market and especially big game hunters. They have a dozen plus models of boots ranging from sturdy trail runners to very heavy insulated mountain boots. The Thor II is the model I own and at the lighter end of their range of boots. But it's at the stiffer end of their range of boots. I've found this to be important when in rough country and carrying heavier weight.

I previously owned a pair La Sportiva boots that filled this role, but sadly discontinued. I tried a couple of more La Sportiva boots, but could not get the fit I wanted. I want a roomy toebox, but I want the midfoot and heel to fit more precisely. For some reason, not easy to find. The Thors fit (my feet) perfectly. Very little break in needed. They fit well right out of the box. I do have wide feet, they are offered wide sizes as well.

They have a Goretex liner which in shoulder season and winter is a plus (not so in warmer months in my experience). They use a Vibram outsole that is nice and sticky on rocks and grips mud and snow pretty well too. With the amount of use they've seen, I've been very impressed with the wear.

The boot (boots in general really) aren't going to appeal to a lot of folks hiking and backpacking; trail runners almost always suffice and are much lighter. But if your adventures take you off trail in rough country and especially if the loads required for that adventure are higher, this boot is worth taking a look at—as is their entire line.

When something works well for me, I stick with it. I recently purchased another pair of Thors as the original pair won't last forever and I want to insure I've got a boot I can rely on in the future.

For a wide range of quality boots, check out the Crispi lineup.

Several hundred very rough miles with these boots; including several trips where loads ended up being in excess of a 100 lbs.

Thanks for the review and recommendation!

Nice review. I've seen more and more hunters wearing Crispi boots. I still own a pair of La Sportivas for this purpose, but it's nice to know your thoughts on the Thors. Much appreciated.

Thanks! My older hunting boots were La Sportiva Omega's- all leather upper, fairly stiff but pretty light (for a hunting boot). And they fit my feet perfectly! Sadly they discontinued those and after unsuccessfully trying a couple of other boots (including another La Sportiva)- I found these :)

Did you ever try the La Sportiva Trango Cube GTX by any chance?

I think that's one I tried. I liked the boot (weight/outsole/etc), but the toebox was just a little narrow for me. If it fits, it's a solid boot. I found mine on a screaming sale- 50% off.