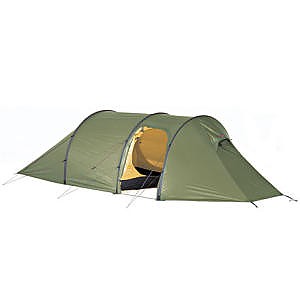 I bought this tent for Iceland backpacking, car camping, and ferried base camping (up in the WestFjords). Iceland can be wet and very windy.

The tent is extremely stable in the wind, with no flutter. It sets up with only four stakes, although a few more are better in high wind.

The tent is ROOMY! Great for two tall people, but it seems like it would work for three. Interior volume is wonderful, with high arched walls.

The vestibule is enormous--big enough to store all your gear and still cook in.

The tent is very light for its size and capacity and windproofness. (That's not to say it's fun to backpack with--but it IS lighter than other four-season three-man tents.)

The poles what I would call an older design, with fixed ferrules, but I like that better than some of the newer designs which have given me trouble.

This is an update on my earlier review, reporting on two memorable trips.

In fall 2008, we camped the Maine coast. We experienced the dregs of Hurricane Ike, with 40+ mph winds and a lot of rain. The tent did perfectly--no problems whatsoever.

In August 2009, we took the tent to Iceland. We began by ferrying out to the Hornstrandir area (just south of the Arctic Circle) for four days of backpacking. The second night, we were hit by a ferocious nor-easter storm, with winds I estimate over 65 mph. There were many nasty gusts--not just the sustained winds of the Maine coast.

The tent did great. It did have one not-so-badly bent pole, and many minorly bent poles--but the Icelanders camping nearby had broken poles, severely bent poles, and totally blown-down tents. I really appreciated the light weight when we hiked over a pass...

We went on to eight more days of car-camping, and the tent continued to perform well. It rained more or less almost every day, and blew from time to time, and it was awesome to cook and store gear in the big vestibule.