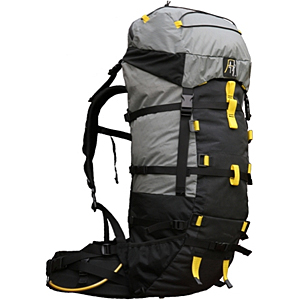 The Figure Four Omega Pack is an awesome all-round pack.The pack I'm using is actually a prototype, which I got from Steve at Figure Four before the release of the final product.

My favorite aspect of the pack is its versatility. I've owned this pack for about six months and used it for local cragging, overnight backpacking, snowshoeing day trips and some low-key mountaineering. It has enough support to pack gear for an overnight trip, but is light enough, and compresses so effectively that it's a great day pack too.

I like that snowshoes strap really comfortably to the outside so you can bring them along if you're unsure of snow conditions. I found that gear loops on the hip-belt and shoulder straps have been useful as convenient clip-points for gear while wearing the pack on low-angle rock climbs. The hip-belt can also be integrated directly into a climbing harness, a feature that could be very useful, but which I haven't yet tried. Although I haven't truly loaded the pack to the max, for a big multi-day climbing/backpacking trip I would consider leaving the Omega at home in favor of a larger pack.

Overall, this is my go-to pack for most outdoor activities and it's held up well to the abuse I tend to put gear through.