One of the dumbest purchases that I really like.

I had an amazon gift card that I had to use and couldn't find anything, so I did this.

I'm embarrassed that I have it. It is seriously one of the laziest things I've ever owned.

Youtube with Exped Synmat Duo - mainly to give you an idea of how loud it is. This inflation took 1min 50 as the battery was getting low. No, I didn't film the entire boring inflation, trust me it worked.

It inflates our Klymit double pad in 1 minute and 40 seconds. A single 3-inch pad takes about a minute.

We have done 4 inflations of a double pad and 4 inflations of single pads on a single charge. But on the 5th night of inflation, it was dead (however the LED light still worked). So you could expect maybe 10 inflations of single pads before it will need to be charged. The 1300mAh lithium battery charges fully in 4ish hours. I also found I could charge for about 20 minutes and easily get 1 inflation of our  Klymit double pad. Flextailgear says it runs for 15 minutes on a charge, and I'd say that is about right.

The inflator comes with several adaptors for many types of valves. We found the adaptor above fits: Klymit, Exped, and some Therm-a-Rests with a flip valve. We have some Klymit pillows with screw type valves and the pump does work with these. But it was a little klunky as I had to push the rubber nozzel over the screw valve and sort of pull and hold the cover out. It inflated the pillow in like 6 seconds. So it does work on screw type valves, but may take a little holding.

The pump weighs in at 3.1 ounces. So it is light enough for backpacking, but with limited number of uses, I wouldn't bring it on extended trips.

Surprisingly bright light! I estimate its around 300 lumens on high. The specs say 400, but I have some doubts about that. There is no focus lens like a headlamp, so it's pretty dispersed. On low, it's great for in the tent usage. The LED's are efficient, even when the pump was dead, the LED's shined brightly.

We have Klymit inflation bags and an Exped schnozzel. This pump is way, way less work than either of those. Using a bag or an inflator like this pump, greatly reduces humidity in your insulated pad. So you are increasing the life of your pad, and in really cold areas, that humidity in the pad is bad for your insulation. So there is a definite good side.

The bad side is the battery. It is not removable or user replaceable (I'll give it a go when needed, but it's all glued, so I have low hopes). So this entire pump is garbage when the battery no longer functions. The pump will not operate when hooked directly to a USB power source. This is a big flaw, if they were smart, they would allow you to hook to an external power bank and use that vs the internal battery.

The pump is also advertised to be great for blowing on a fire. I tried this and, ya it works. BUT, the pump warms up fast and heat is not good for batteries, so I would only use it near the fire for a few seconds to get things going. Again, very lazy as we have lungs for a reason, and I rarely have campfires, so I doubt I'll put it to this use.

So I have a love hate with this little gadget. Love the pump, hate the e-waste.

We have several other inflation bags for our pads.

$29.98
Buy Now »
Help support this site by making your next gear purchase through one of the links above. Click a link, buy what you need, and the seller will contribute a portion of the purchase price to support Trailspace's independent gear reviews. 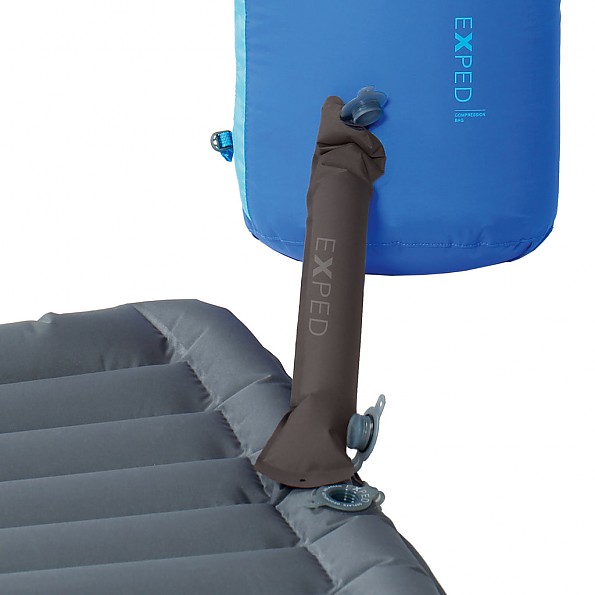